I woke up early, before 6am, to machinery sounds from the concrete packing plant nearby. I got my stuff together, and headed down the road to the deli for breakfast. Rash and Piñata joined me after a few minutes, and Piñata and I packed out a reuben for lunch. We headed up the road back to the trail, and at the trailhead we met 3 middle aged thru hikers: Whistler, Trainwreck, and Scooby. We told them about the deli, and they headed down the road to grab a bite to eat. 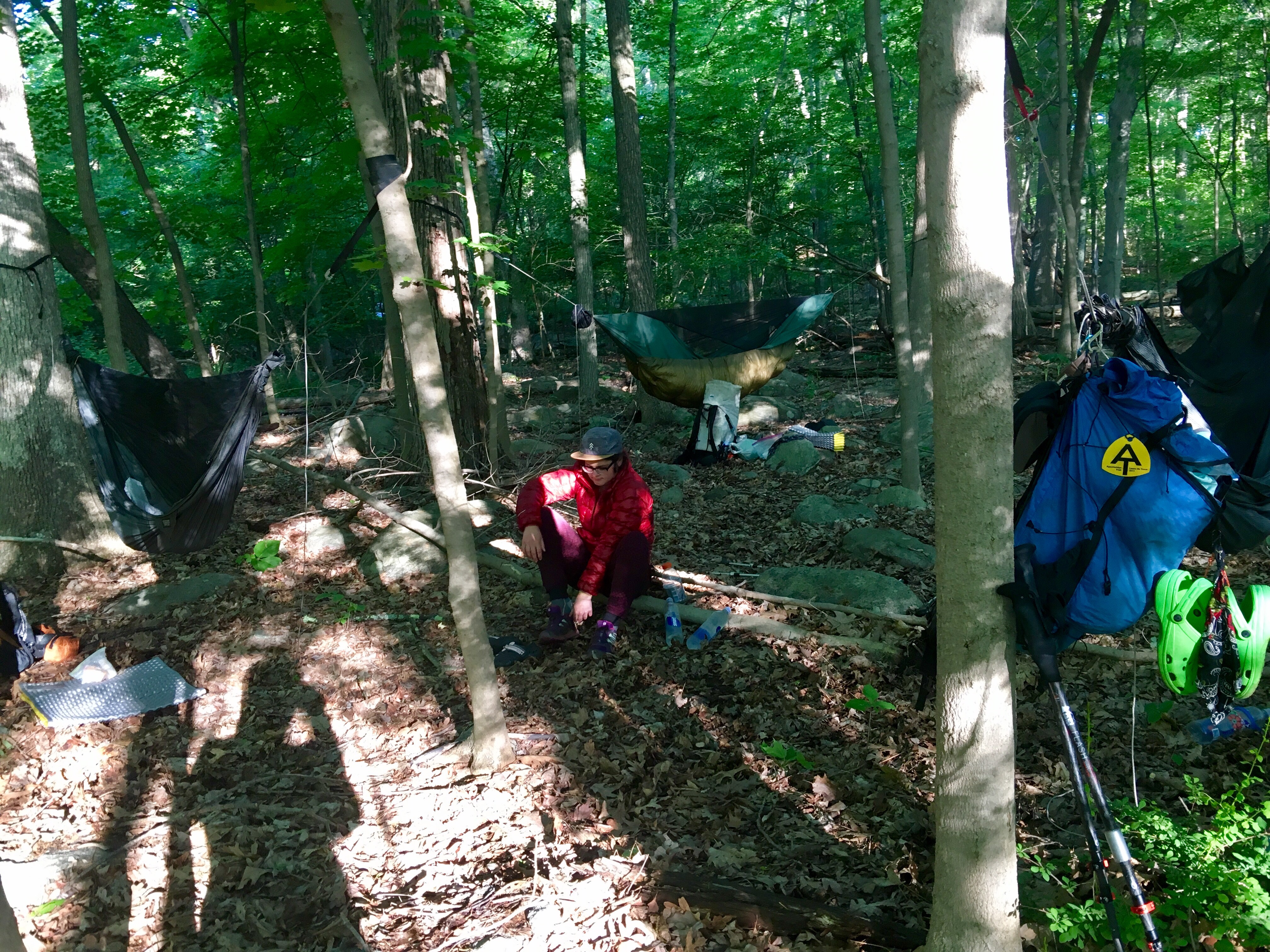 Our campsite near the deli 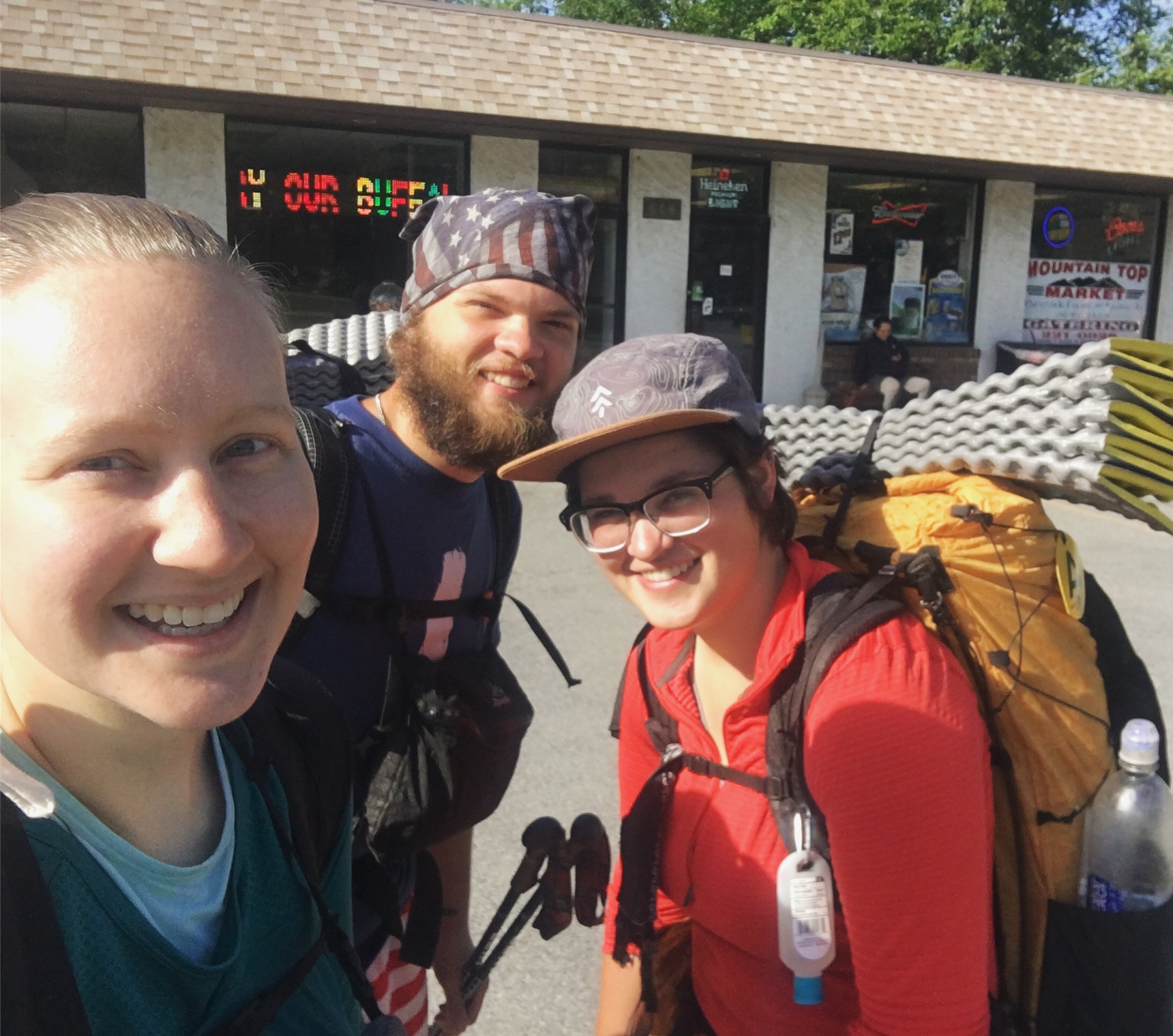 In front of the deli

We came to a huge tree in the woods, and thought it was the Dover oak (the oldest oak on the AT), so we took a break and took some pictures. After the break, we checked the map and realized the Dover oak was further down the trail. We stopped for water and got swarmed by mosquitoes. It was awful. The swarms followed us eve after hiking away from the water source. All day, the terrain was swampy and wet, and the gnats and mosquitoes were awful.

We passed a large lake called nuclear lake. We stopped for lunch to eat our reubens, but I left early because the mosquitoes were so bad. I put on my rain jacket because they were biting me through my shirt, but they were relentless. They stayed off my legs where I sprayed Deet, but I didn’t want to cover my whole body in Deet. I stopped to eat the rest of my sandwich, but didn’t linger because the mosquitoes caught up. 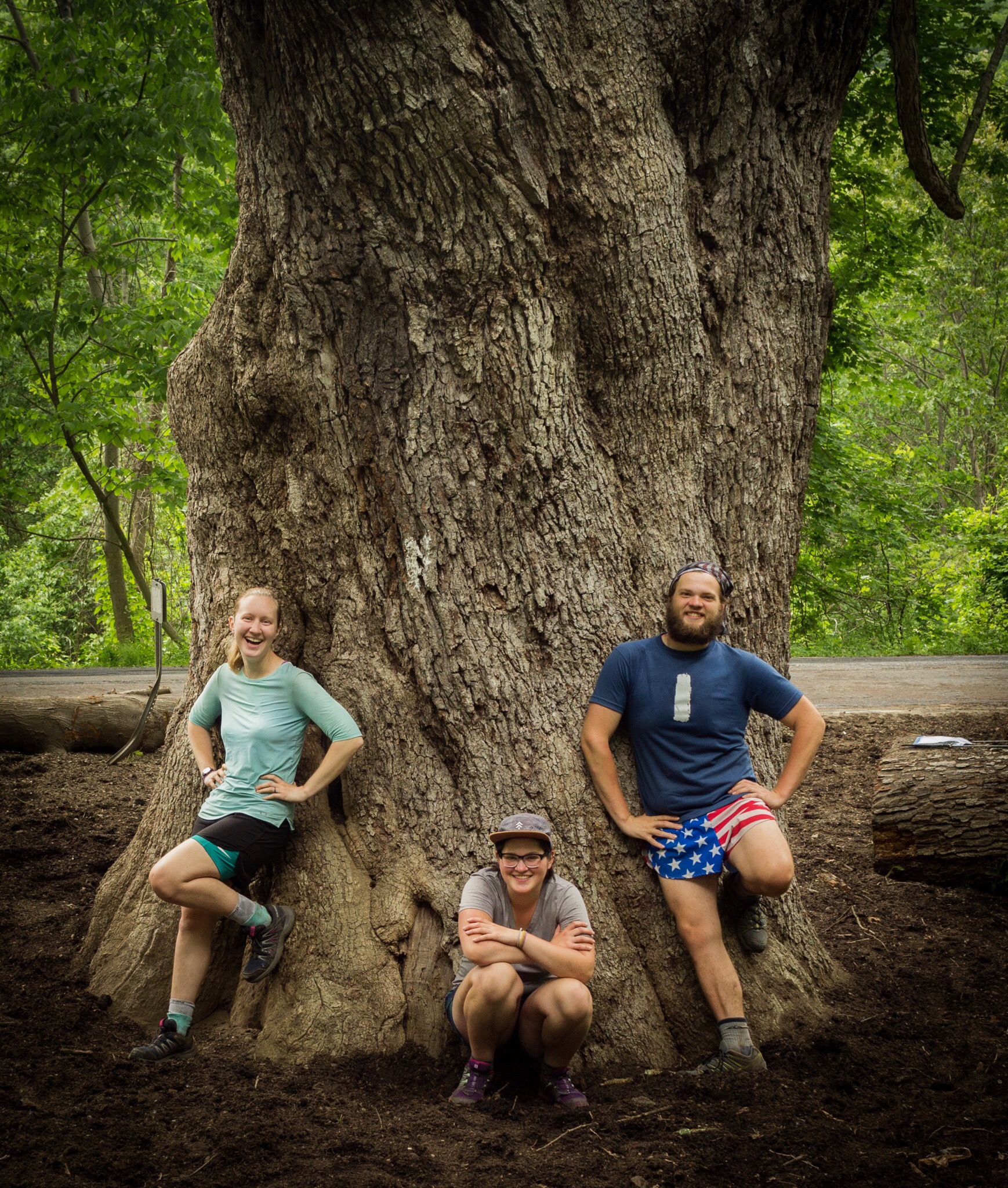 I stopped at the road where the real Dover oak was on display. It was magnificent. Rash and Piñata came up shortly after I arrived and we took pictures. We hiked through mud and along a cool board walk like the one in New Jersey with cool wooden chairs. 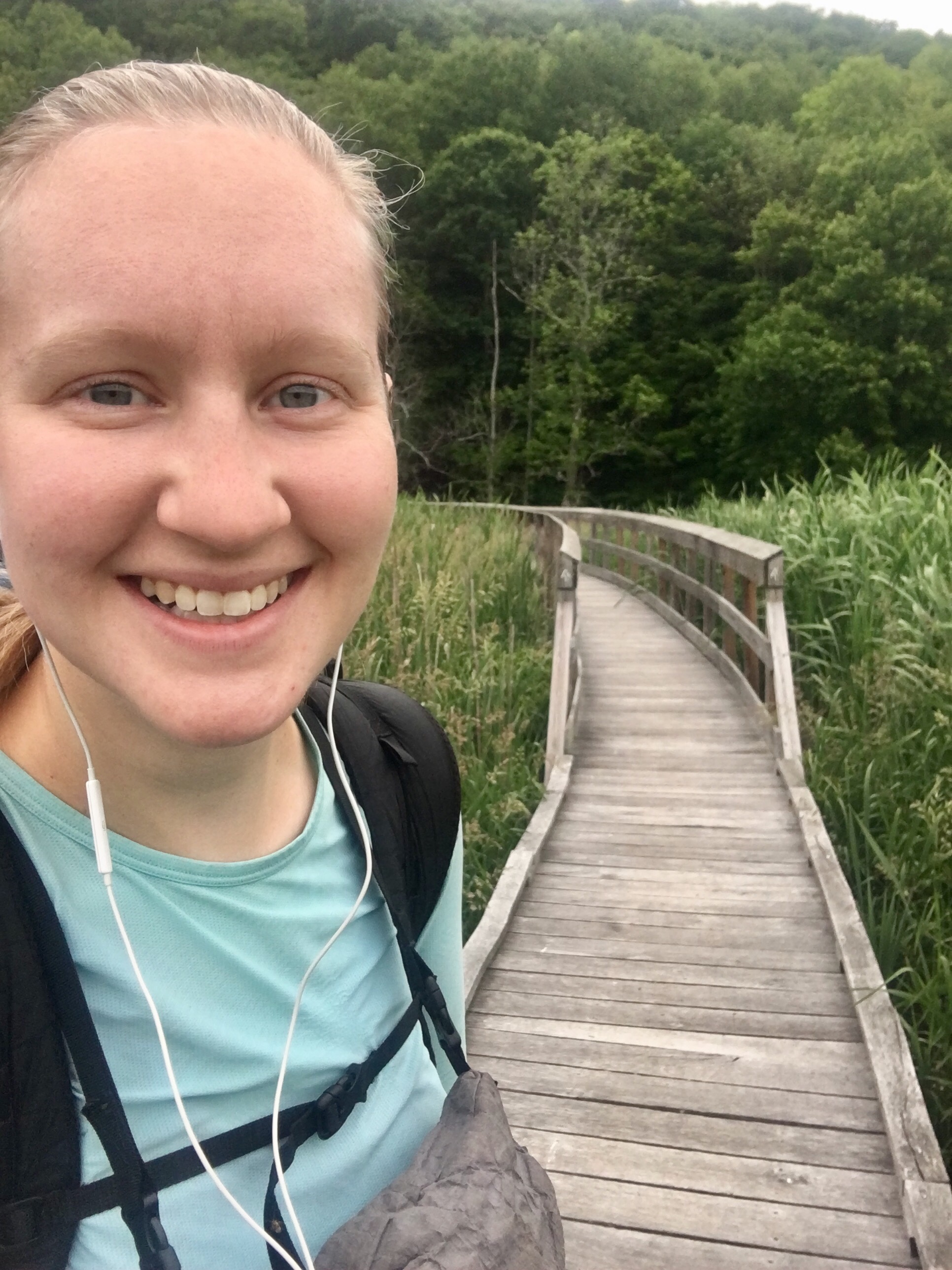 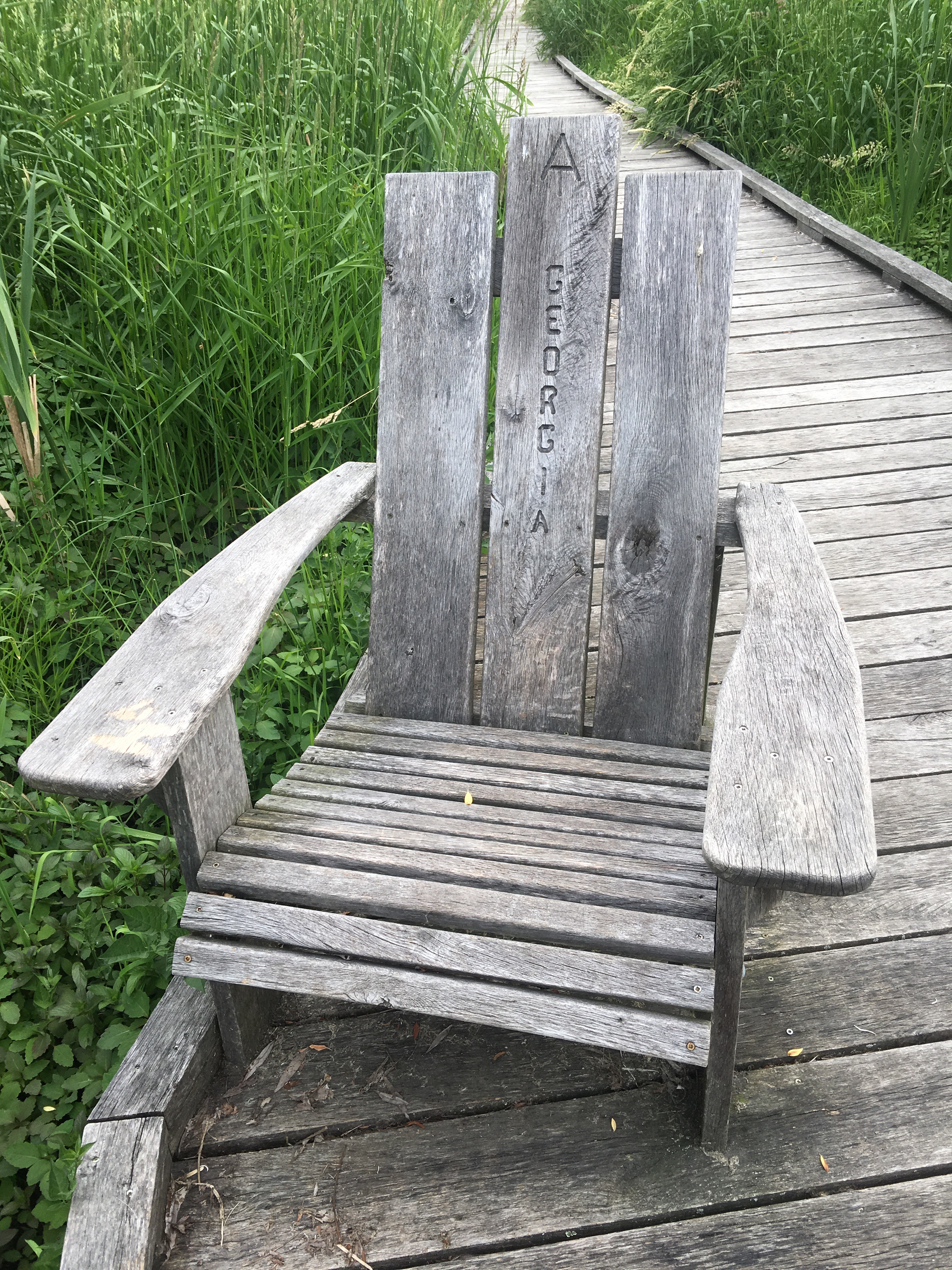 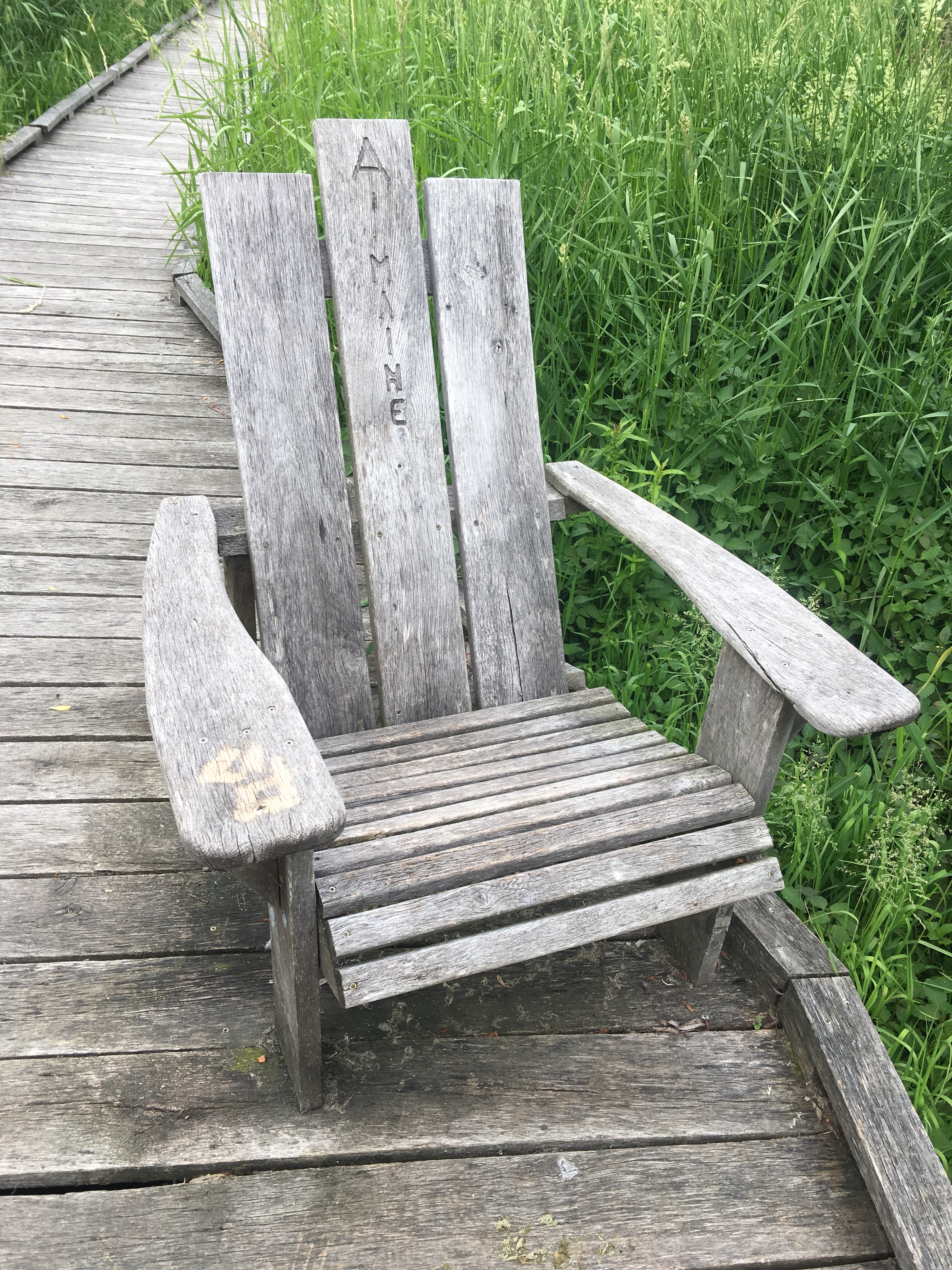 The trail turned muddy with boards propped up on logs. Some of the boards would sink into the mud and water, so we had to be careful. Rash stopped abruptly on a muddy part of the trail and pointed ahead. ~100 feet ahead was a bear on the trail! I grabbed my phone to snap a picture but only got one before he ran off into the woods. 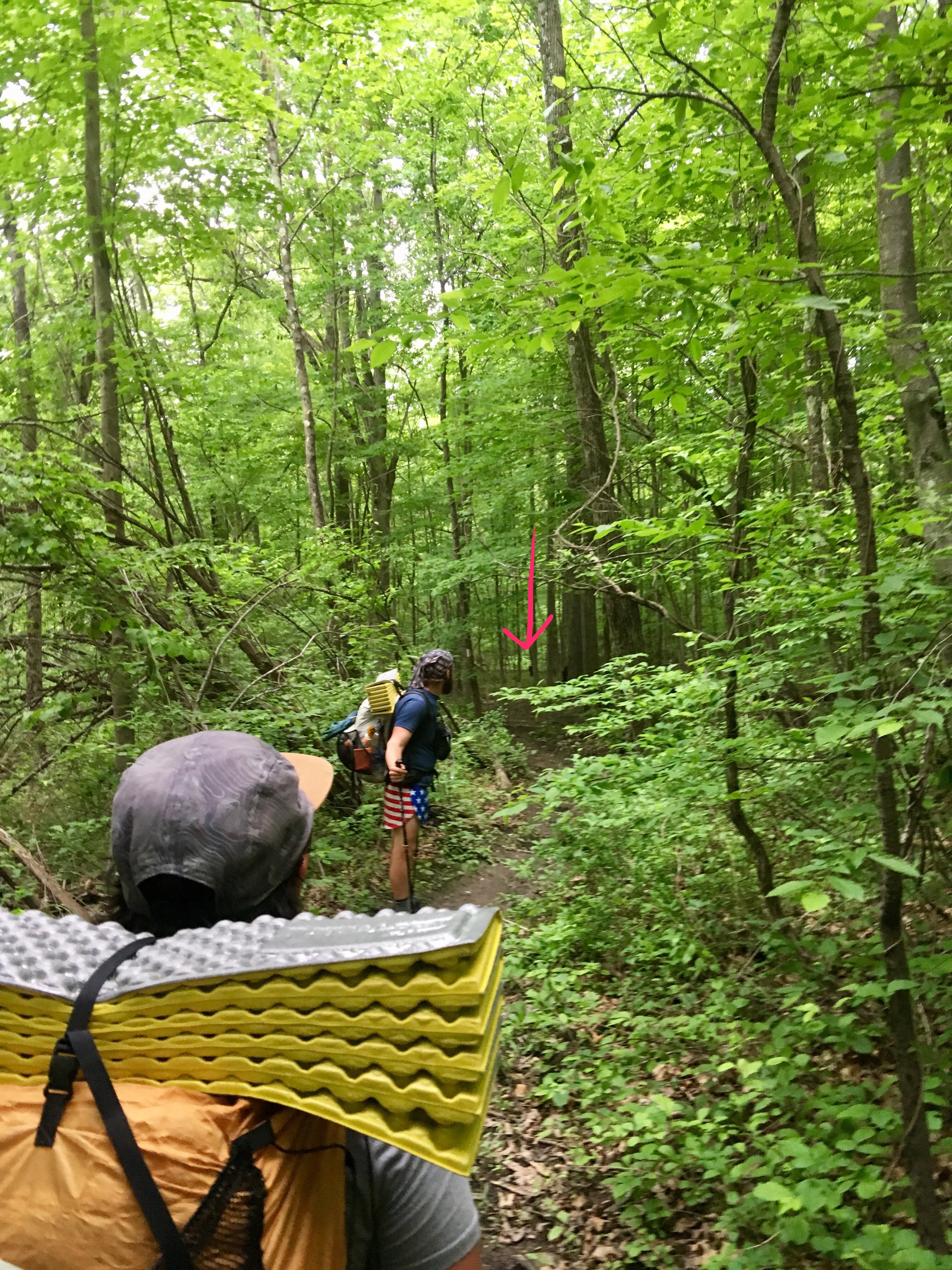 We came to the shelter shortly after our bear sighting. The campsite was full of familiar faces: Whistler, Trainwreck, Scooby, Honey Badger, Lioness, Lucky, and Wolverine. We hammocked near Honey Badger and ate dinner on a log nearby. My mom was at our house getting our cat, so I called Louis and talked to both of them before turning in.

This morning was chilly. I made oatmeal sitting on a log by the firepit since that’s where we ate dinner last night. I had my oatmeal packets in my lap, and while pouring the boiling water, some spilled out into my lap. I got my water bottle from my pack and used it as a cold pack. Since it was cold last night, it worked pretty well. Everyone at the campsite left by 7:30 except for Honey Badger, who left right before us at 8:00. We got to the Connecticut state border early on and saw Sweetspot there. 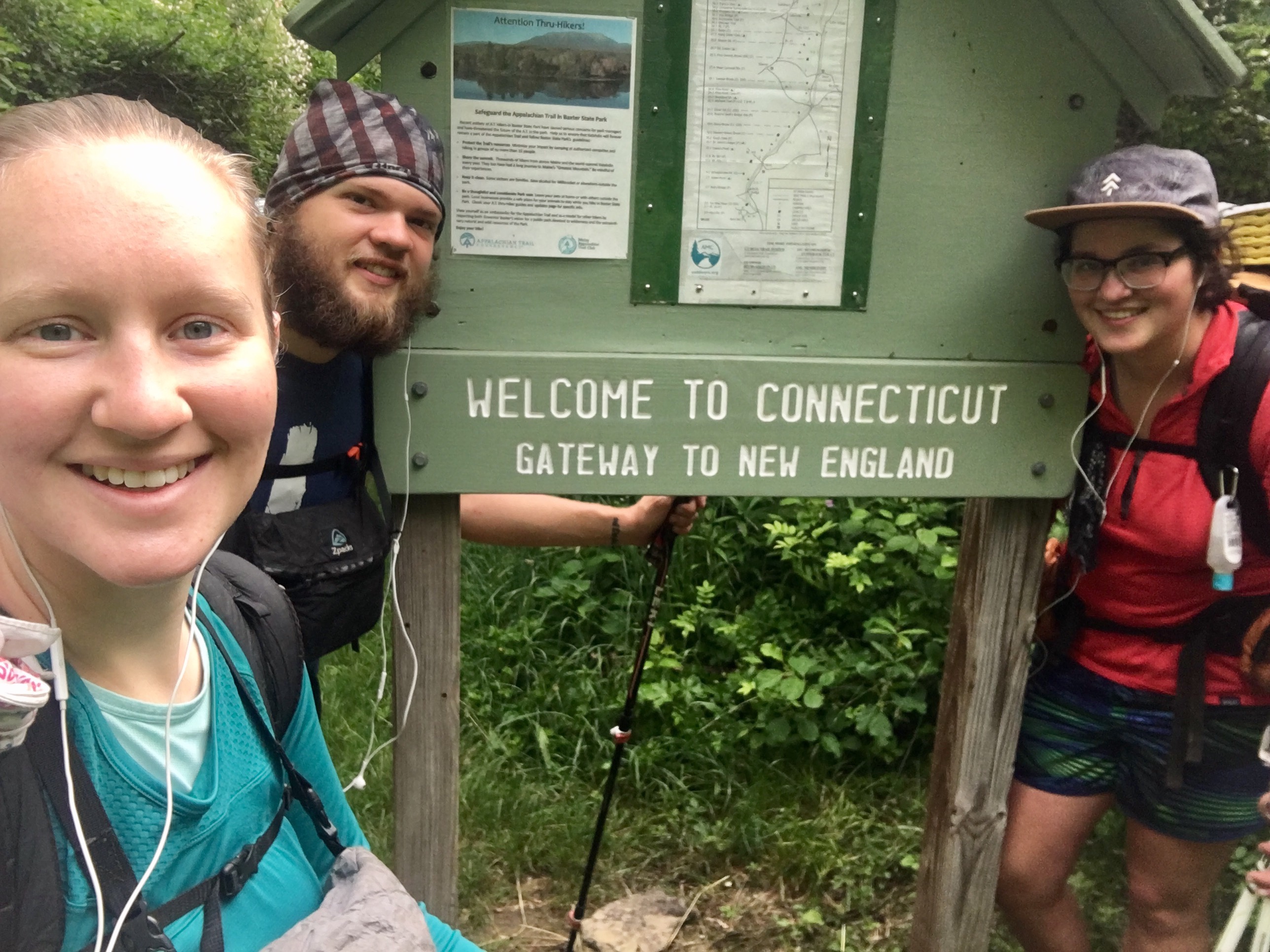 We started out with a few climbs, so I warmed up quickly and shed some layers. I was leading, and I was going at a fast pace. I wanted to get to the shelter early and have time for breaks. We did 2 major climbs, and by the second, I was utterly exhausted. We took a break at the top where there was a flat rock to eat snacks and rest. I didn’t feel like I recovered from those climbs, because hiking afterwards was exhausting. I took another small break a few miles after, and I met Rash and Piñata at the shelter for an extended lunch break. 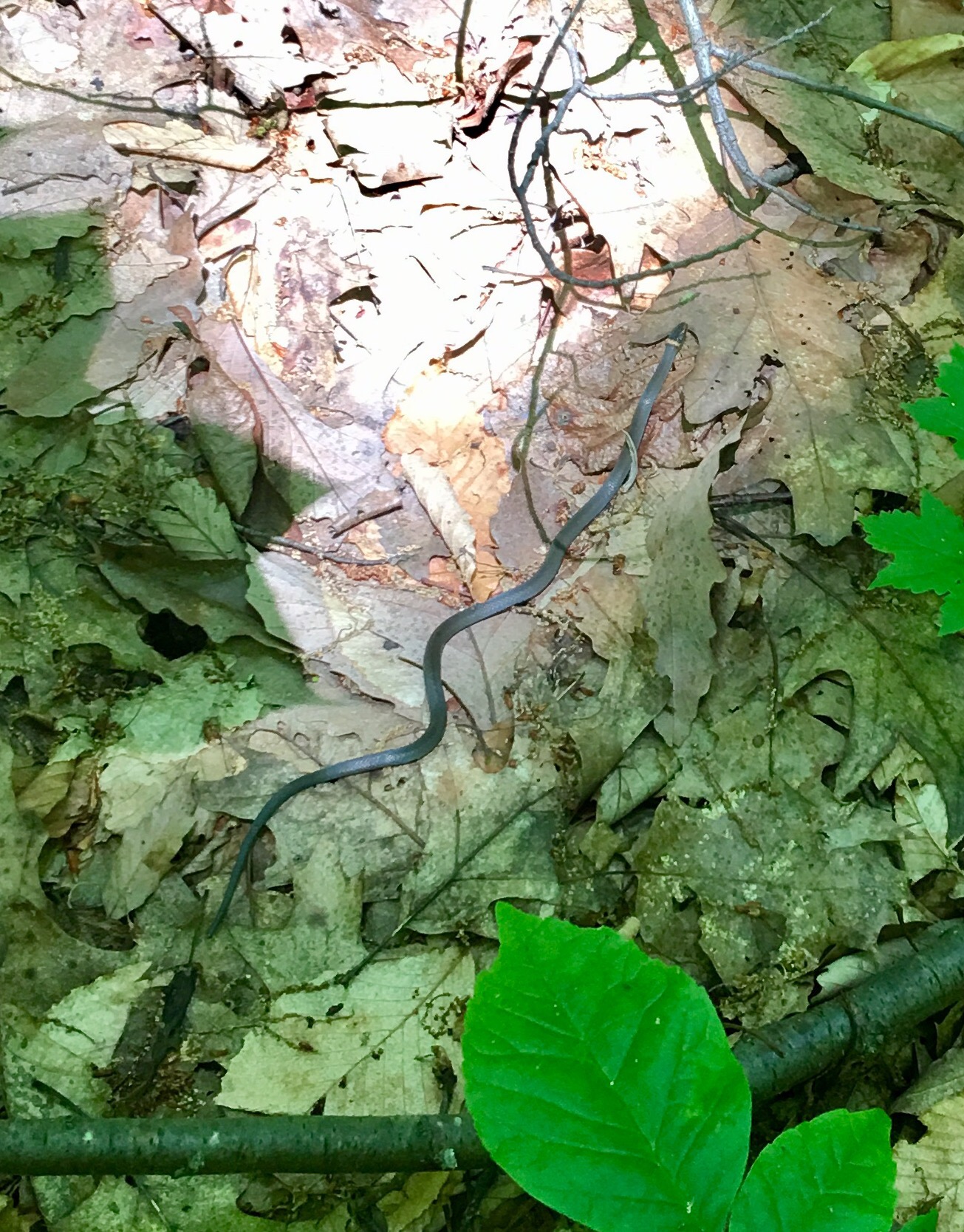 At the shelter, I met a hiker named Groceries who is finishing up her section thru hike with 500 miles to go, and Tall Man who is flip flopping. Tall Man had a guitar, and played a song and sang. It was surprisingly therapeutic and relaxing. It reminded me of Louis playing the guitar at home and made me homesick.

We had a couple more smaller climbs, then we went down St. John’s ledges, which was a rocky, steep descent. That descent would have been near impossible in the rain, and reminded me of Dragon’s Tooth. After the ledges, we walked along a river for the last couple miles. I talked with Louis on the phone since I had service and we’re going into town tomorrow so I can use my phone battery liberally.

We met some day hikers at the shelter. One owns a construction business and the other is a corrections officier. Over dinner, Rash, Piñata, Antman, and I reminisced about steep climbs we’ve had like the one out of the NOC, and talked about the White Mountains coming up. The construction owner goes up to Mt Washington in the winter, and said the views above treeline are incredible. I’m excited and nervous about tackling the hard upcoming terrain.

The shelter had campsites a little ways away from the shelter, so we headed off and hammocked near where Antman tented.

The shelter was right next to a large river, and I listened to the sound of the water falling asleep. Shortly after I fell asleep, I woke up to a loud mechanical banging that sounded like a train passing. It was alarmingly loud. In the morning, Rash and I talked about the train, and Piñata hadn’t heard it since she took Benadryl before going to bed for her mosquito bites. We packed up and left with empty food bags.

Piñata and I started out in our shelter pants and long sleeves since it was a bit chilly. We had a 2 mile walk along the river, and then one big climb before we hit the town. Walking along the river, I heated up quickly. We stopped at the base of the climb so Piñata and I could change. The climb was a bear, but was over quickly. It was hot and I was out of water. We got to the trailhead and hitched the mile into town. The man that picked us up offered us a banana, and I took one. We thanked him, and went to the market/deli to resupply. It was an expensive resupply, but it had what we needed. I got a reuben and cheeseburger from the grill. We ate lunch on the patio, and walked across the street to the fly fishing outfitter. I got a head bug net and more bug spray. We walked the short 0.2 miles to the hotel and checked in. After a well needed shower, we relaxed the rest of the day watching TV. 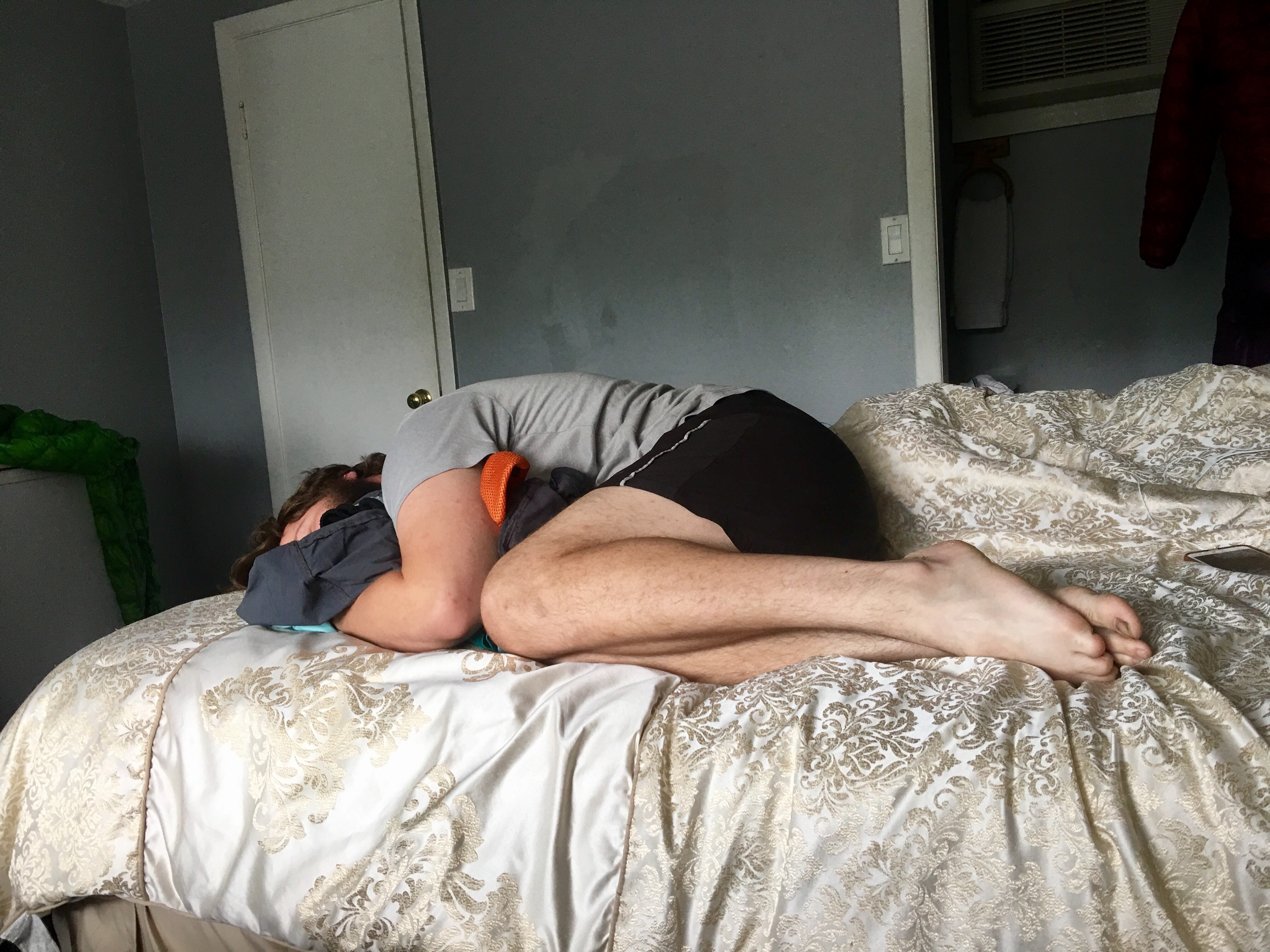