The Dirt on the Trail: Chapter 11

Sadness at Cloudland
I woke up early to catch the sunrise. Unfortunately my phone died before the colors really started coming out in the clouds. 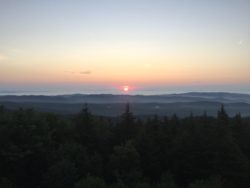 Gumby contacted a Trail Angel near Hanover, NH who would provide us with a place to stay once we arrived.
The trail was groomed, so I did a lot of running downhill. The climbs weren’t intense, but the terrain still managed to whoop us. The humidity didn’t help.

We stopped at the Cloudland Market and regretted hiking the extra 0.2 of a mile there since they had limited stock of anything. We were really craving ice cream, but the only flavors they had were vanilla (boring) and cinnamon (gross). We drank their sodas (the only other thing available that wasn’t meat or cheese), and rushed back to the trail so we could beat the approaching storm we had been hearing rumbling in the distance over the past few hours. Our day ended at Thistle Hill Shelter (which had a pretty cool privy I should add). 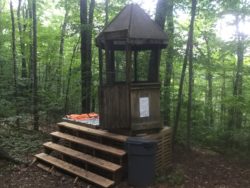 It never really rained on us, and Primo and Cricket managed to catch back up.

—
New Hampshire and Paying It Forward
It was a misty morning and it started with some soda trail magic near Joe Ranger Road. We got even better trail magic when we reached West Hartford Road thanks to Linda and Randy who cooked us sausage and peppered scrambled eggs. 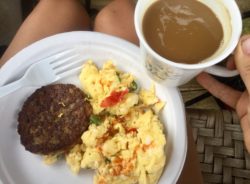 They also provided coffee and let us lounge on their porch and use their WiFi.
Once back in the woods, I was on the lookout for a moose. Primo had seen one the other day and I’m hopeful that I’ll get to see one too before I’m out of the north.
I caught up to Frisbee, but he stopped me where I stood. There was a wasp nest on the trail and he had gotten stung five times. He told me to run to where he was standing. I did, and was fortunate not to get stung too. Just when we thought we were safe, Frisbee got stung again. I grabbed his pack and we ran. Big Heart, a section hiker we had been around, also got stung. I gave them the Benadryl I had leftover from when I got stung in New York.
We re-grouped at Happy Hill Shelter, then pushed on to Elm Street in Norwich, VT, where we would be staying with Short n’ Sweet and Greybeard overnight. We dropped by to say hi and to let her know we were in town. She informed us of the ground rules and told us to be back before 8 if we wanted to do laundry and shower there.
We hiked on to the border and into Hanover, NH. 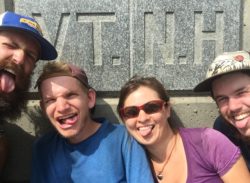 We got our free thru hiker donut provided by Lou’s Bakery then grabbed our new kicks at the post office before heading to Salt Hill Pub to eat. The food was amazing! 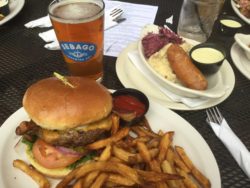 Frisbee scored us a hitch in a 1986 Isuzu Trooper, we showered, did laundry and met with Short ‘n Sweet. 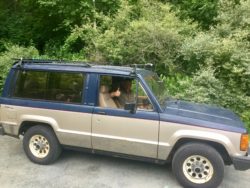 She told us the story of why she opens her home to hikers every year. Her son had hiked the trail several years ago and had gotten injured. A family had taken her son in for a couple weeks so that he could heal and she decided she wanted to pay it forward. She organized a group of people in Norwich to take in hikers when they’re able. She suggested we pay it forward to someone in need in the future and ask that they do the same to spread the love. I plan on doing so when an opportunity arrives.

—
A Zero in Hanover, NH
We took a zero, partially because we had been anticipating the Indian Lunch Buffet that AWOL had incorrectly stated was available everyday of the week when it was only on Sundays (tomorrow).
We got smoothies at Dirt Cowboy then got our free slice of pizza at Ramunto’s and a few beers.

That afternoon we wreaked havoc through town and spent more time in Ramunto’s for more brews. Frisbee and I were stoked to see our old friend Zebra, a chick from Poland who we hiked with in the south. 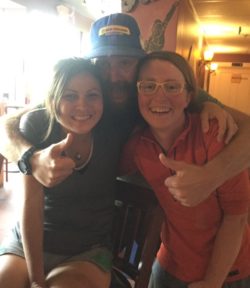 She had just summited and was slowly making her way back to Rutland. Frisbee managed to score her a ride there.
We asked a police officer if we were allowed to set up our tents near the Dartmouth soccer field. He said that was fine as long as we got up and out of there early the next morning. Everyone else tented in the woods or near them, we didn’t notice the no camping signs and set up along the sideline of the field. This would be a mistake.

A Day of Recovery

The sprinkler system woke us up. We rushed to unwrap the rain fly, but weren’t quick enough. We got a little damp. Fortunately the sprinklers weren’t located under our tent.
I took a brief nap on a picnic table behind a nearby gas station, then Frisbee, Cricket and I headed to Starbucks for some much needed coffee. Gumby would join us later.
We decided to take another zero since Frisbee’s ankle was really swollen and there wouldn’t be another pharmacy along the trail for another 3-4 days. It was Sunday, so we needed to wait until tomorrow to try and have a prescription called in. Cricket and Gumby decided to stick around with us and we all went to indulge in the Indian buffet down the street. 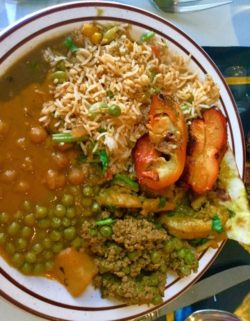 Gumby went to the movies while the rest of us headed to Molly’s for drinks and WiFi. 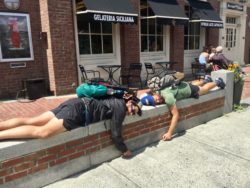 Frisbee and I ended up getting a room in town. After losing out on sleep the night before, it was nice to be in a soft bed.

Frisbee and I took advantage of the free breakfast at the hotel and then he called the doctor to see if he could get medicine for his wasp sting. Waterbug, a wild man we had hiked with last year, was hiking southbound along the trail this year and happened to be in Hanover. 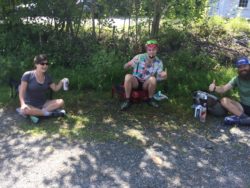 We hung out with him for a little, then grabbed lunch at the Co-op. I said goodbye to Waterbug, and to Frisbee as well, since he was still waiting for his medicine to be filled. He’s a much faster hiker than me, so I decided to hike on and have him catch up with me at the shelter.
I took a short break on top of Moose Mountain’s South Peak to eat my thawed out burrito, then cruised along until I made it to Trapper John Shelter.

It was dark when I arrived. Gumby and Cricket got settled in, and I awkwardly sat in the dark waiting for Frisbee to show up. He got there at 10:15.
—
Smarts Mountain and a Legend
We were all moving slow in the morning. I got to see the nicely decorated privy before leaving. 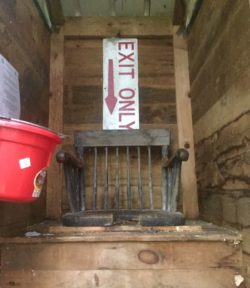 The climb up Smarts Mountain was a little strenuous, but we were rewarded by the views from the fire tower. 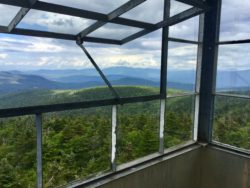 We ate lunch in the Fire Warden’s Cabin, then made our way down, only to head back up again up Mount Cube. 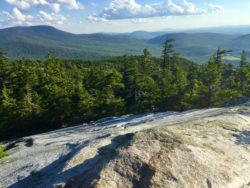 We were planning on making it over the mountain before looking for a stealth site, but we came across a nice one just shy of the summit. 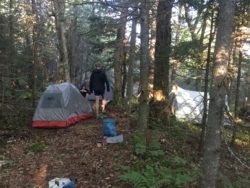 Oh, by the way! Did I mention we ran into trail legend Andrew “Traildog” Thompson who held the FKT record in 2005? 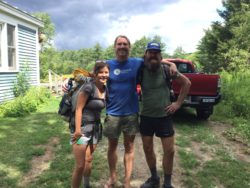 We also talked to triple crowner Joshua “Bobcat” Stacy near Danby, VT during trail magic. We just didn’t realize it was “the” Bobcat at the time.