The Dirt on the Trail: Chapter 13

Many Views and Land O’ Lakes
The Whites continue to impress! After scoring some trail magic at Crawford Notch, we were stunned by Webster Cliffs’ many views. 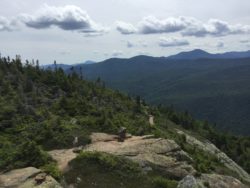 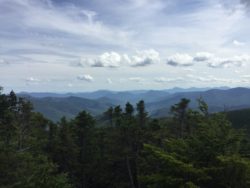 We climbed Mt. Webster and Mt. Jackson, then took a break at Mizpah Spring Hut. 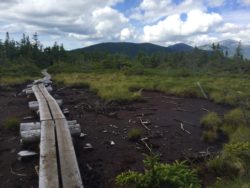 We were going to do work for stay, but they couldn’t take all 5 of us, so we pushed over Mt. Pierce and passed Mt. Eisenhower where we started experiencing some incredible scenery. 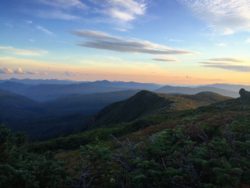 It took us a while to get over Mt. Franklin and around Mt. Monroe to get to Lakes of the Clouds Hut (aka Land O’ Lakes Hut) since the mountains looked phenomenal against the setting sun. 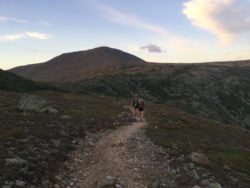 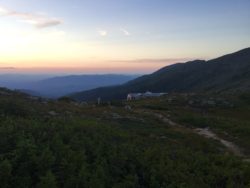 It was nearly passed the horizon when we arrived. 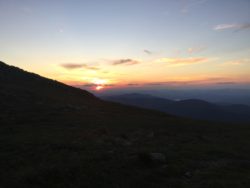 There wasn’t any work for stay or room in “The Dungeon,” which turned out to be a good thing. We paid $10 to sleep on the floor and would be conquering Mt. Washington in the morning.

Mount Washington
We got up early since the crew at the hut needed to set the tables for the guests, and it was a good thing since we wanted to beat the crowds to the summit. The time had come to climb the second highest peak on the AT, Mt. Washington. It was a tricky mile and a half, but the weather was great! 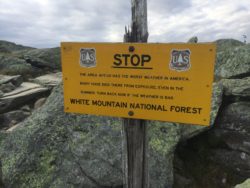 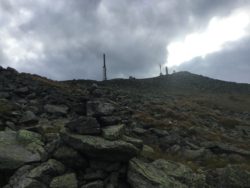 Mount Washington is known for its bad weather, and has the highest wind speed in the world recorded by man, so we got lucky! 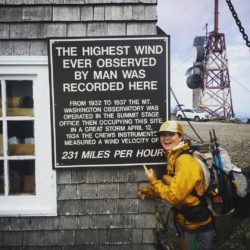 We quickly got our summit photo before there was a line, checked out the Tip Top House, then headed to the Sherman Adams Building. 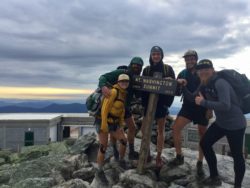 We were waiting for the cafeteria to serve hot food, so we killed time by looking around the gift shops, checking out the interactive visitor center, and watching the cog train bring people up to the summit. 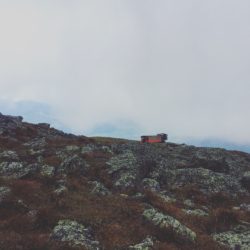 After we ate, we made our way down, stopping for a break at the Madison Spring Hut. 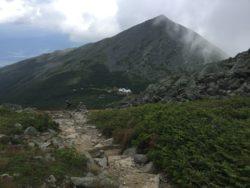 We ate and decided to meet at the Osgood Tent Site to decide if we were going to push it into town. After climbing Mt. Madison and making the steep climb down, we decided to stop for the night.

Gorham, NH
It was just shy of a 5 mile hike to Pinkham Notch. Frisbee and I were surprised to see Sweet Jane there, who we hiked with last year. 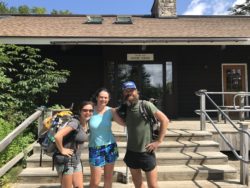 We knew she was hiking SOBO, but hadn’t had WiFi in a while to see where she was located. She told us she was going to do the whole trail this time, so we were thrilled! We would meet up again when we returned to the south to finish the miles I missed.
A girl who worked at the kitchen at Pinkham Notch and her friend crammed the 5 of us in her car and took us to Gorham, NH. We ate, booked a room at the Royalty Inn, grabbed a couple beers at Mr. Pizza, then got a hitch to Walmart to resupply. After returning to the motel, we did hiker errands, drank beer, ate more McDonalds, and took advantage of the motel hot tub.

An Unexpected Zero… Times Two
After checking out of the motel, we met at McDonalds. Middle Brother was joking when he told Gumby we were taking a zero, thinking he was going to get mad and all worked up about it. When he said, “okay,” we convinced ourselves we were fine with it too. Back to the Royalty Inn we went!
History would repeat itself when we woke up to rain and limited motivation the next morning. We had to move down the street to the Gorham Motor Inn. We wasted time goofing off at Walmart and ran back into our old friend, Bodie at Mr. Pizza. The Wildcats would have to wait another day.

The Wildcats and a Wedding
Well, it was time to get the hell out of Gorham. Somewhere in the mix a couple of us developed a cold, which didn’t help boost morale. It was time to conquer the Wildcats.
It was a scramble up rocky crevasses to get to peak D. Before I got there, I heard a lot of cheering and realized we were uninvited guests to a wedding by the gondola. 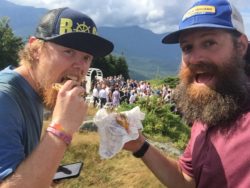 We stopped just shy of Carter Notch Hut, and saw a view of the Hut and ponds below before arrival. 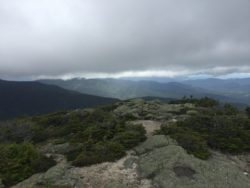 Then, it was just Mt. Moriah before ending our day at Rattle River Shelter, about 2 miles from the road to hitch back into Gorham. 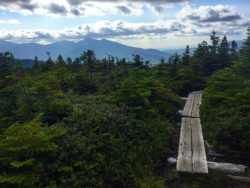