The Dirt on the Trail: Chapter 14

Last Dance in Gorham
We hitched back to Gorham to resupply and ended up back at Mr. Pizza for beer. The solar eclipse had everyone worked up according to the news and one of the waitresses had those special glasses so we could see it. We ended up getting beer to-go and hitching back to the trailhead to camp for the night. We crossed paths with our old friend PCP who was about to hitch into town once we got there.

I Saw A Moose!
Some of us were feeling more hungover than others. I still had an awful head cold that I was dealing with as we packed up to start hiking. We stopped by White Mountains Hostel and chatted with Odie before humping it up Mt. Hayes. We took a lunch break there, then slowly worked our way towards Gentian Pond Shelter. We had heard there was a resident moose there and wanted to see one. I never saw one there, but was thrilled to see a bull moose staring me down across from Dream Lake before I got there! 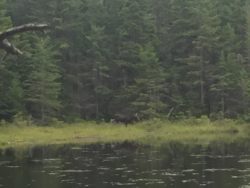 Maine and The Hardest Mile
The next morning we would climb up Mt. Success which would mark my 900th mile on trail this year. Two miles later, we’d cross the border into Maine. 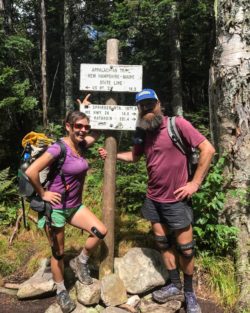 We’d be greeted with amazing views and a nice workout up Goose Eye Mountain. 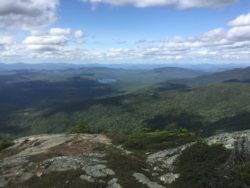 We’d get an even better workout later when we conquered “the hardest mile” of the AT, Mahoosuc Notch. 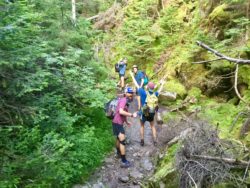 We treated it like a jungle gym and tried to make the best of it. I could have done without my pack plopping in a mud puddle, though. 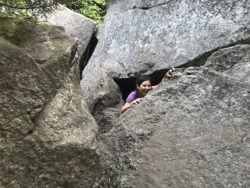 As soon as we wrapped it up, we crammed in Bull Branch campsite for the night.

Hiking Cricket’s Hike
It was Crickets birthday, so we sang to him several times and Middle Brother insisted he lead our hike all day so we could “hike Cricket’s hike.” Cricket was less than thrilled about all of this. After climbing Mahoosuc Arm and taking an early lunch break at Speck Pond Shelter, we took another long break at Grafton Notch. We raided a trail magic box since we were all short on food, and laid out in the parking lot to soak up the sun. 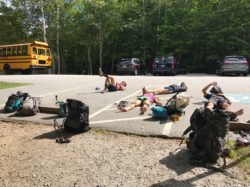 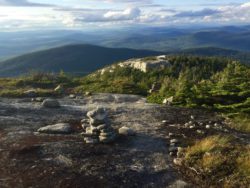 Our hike would end at Frye Notch Lean-to. One of the other hikers sleeping there, Fuego, had packed out sausages. Since it was Cricket’s Birthday, and was going to be mine in two days, she was nice enough to share them with both of us. Even other hikers are capable of providing awesome trail magic!

Andover, ME
We made it to East B Hill Road to hitch out to Andover, ME. We were all out of food, starving, and there was pretty much no traffic along the road. It took us a long time to hitch, but a nice older man with a vanity plate reading, “GEEZER” helped us out.
We went right to Little Red Hen Diner and all got a coffee and the Mountain Burger. It was so nice to eat some hot food. The owner of the diner allowed hikers to sleep behind the establishment so we got set up out back. Our old buddy Backtrack, who we all hiked with in the south, lived in Maine and came out to visit us. We got some beer across the street and hung out with several other hikers out back most of the evening. We couldn’t resist returning to the diner to eat dinner. I got bacon-wrapped scallops and their last slice of blueberry pie. 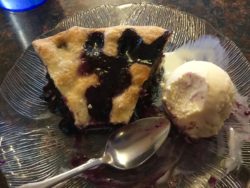 The church bell chimed every hour and coyotes yipped in the distance throughout the night.

—
It’s My Birthday!
I got up early with Frisbee to eat at the diner for breakfast. I got the “Hungry Hiker” meal. 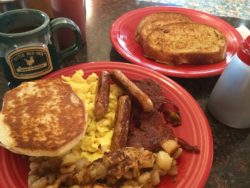 We drank a couple beers then Backtrack took us on a road trip to Mexico. Mexico, Maine that is. We stopped at a cemetery which had a “Entering Mexico” sign, before working our way to the Walmart to resupply. 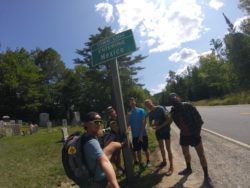 We lounged out front of Walmart, as hiker trash does, and Gumby brought Cricket and I “birthday brownies”. 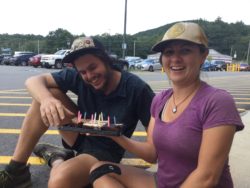 We grabbed more beer at Andover before Backtrack drove us back to the trailhead, where we’d set up our tents. We said our goodbyes to Backtrack, then drank as we listened to music by the fire.

—
Old Buzzard and Old Blue
In the morning, we climbed Wyman Mountain, ate lunch by Sawyer Brook, then made our way over Moody Mountain. I was getting concerned over leg pain I was experiencing. It seemed to be getting worse every day.
There was trail magic thrown by Old Buzzard by South Arm Road. He made us hot dogs, corn on the cob, chili and potato salad. Originally, we had planned to do 8 more miles to the next lean-to, but it was getting dark soon, so we stopped at Unnamed Gap after a brutal climb over Old Blue Mountain.