The Dirt on the Trail: Chapter 15

It was a freezing morning breaking down camp at Unnamed Gap. I was less than thrilled that the dull pain in my right leg that I had been trying to ignore was getting worse. I hobbled along until we took a lunch break at Bemis Mountain Lean-to where we met up with the others. 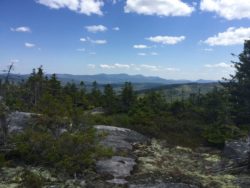 I took my time working my way down Bemis Mountain’s second peak which delivered some nice scenery, took a second lunch at Bemis stream, then ended our day at Sabbath Day Pond Lean-to.

Laser beam and Kinda joined us at camp and we had a nice fire, and we got to hear the loons singing all night long from the pond. 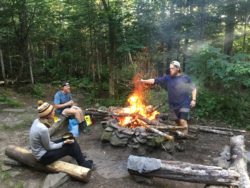 Leg Pain and Grouse Attack
We bumped along the 9 miles to get to ME-4. The pain in my leg was reminding me more and more of the pain I experienced last year when I had a pelvic stress fracture. I was feeling pretty down and out, but was distracted briefly when a grouse swooped at my head from behind and scared the shit out of me! Sorry, it’s a horrible photo. 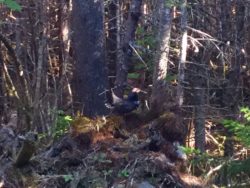 I met up with the guys at the road and we hitched into Rangeley, ME. We lounged around Inner Eye coffee shop, browsed through some shops, then headed to Sarge’s Pub for burgers and beer. We eventually ended up at Town and Lake Motel for the night. 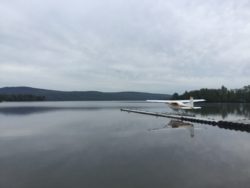 A Zero in Rangeley
Feeling less than motivated, we booked the room for another night, then grabbed breakfast at Keeps Corner Cafe.

There was a bunch of ducks that resided on the motel premises, so once we hitched to the IGA grocery store to resupply, I was sure to grab some cheap bread to feed them later. They were adorable! 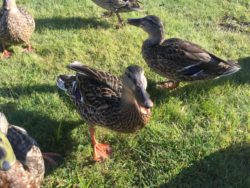 We grabbed a late lunch across the street at The Shed which had some grubbin’ BBQ. 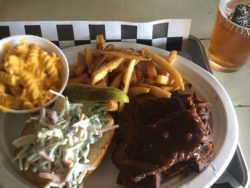 The rest of the evening was spent relaxing, feeding the ducks, and drinking beer.

Piazza Rock
The ducks were waiting for me in the morning, so I shared some of my Goldfish with them. You know they had the power to melt hearts when a hiker willingly shares her food with them. 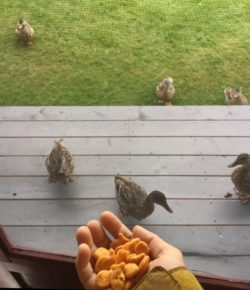 We ate at Keeps Corner Cafe one more time, checked out then headed to the center of town to hitch out. 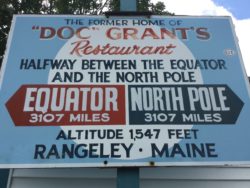 We would stop at Piazza Rock Lean-to less than 2 miles from the trailhead, which was home to a two-seated privy with a cribbage board. 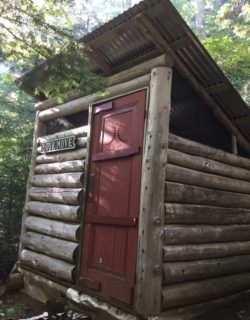 A guy named Cheers who had done his share of section hikes along the AT, followed us to the shelter and asked us if we liked beer (You know it)! He lived in the area and was just taking a short hike to deliver some trail magic! What a guy! 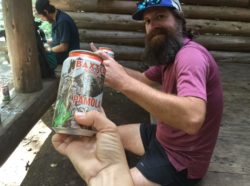 Middle Brother and I would wander to Piazza Rock, then we’d all enjoy a massive fire later that night. 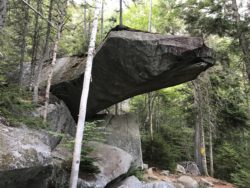 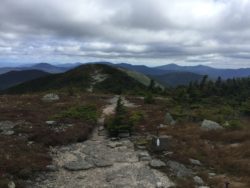 It was absolutely freezing out and the wind nearly knocked me over with every step. I wish we had better weather so I could have enjoyed the views more. I was more determined to get below treeline. 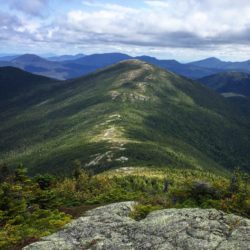 We ate a late lunch at Poplar Ridge Lean-to where we also sat at for a while bundled up in our sleeping bags. It was frigid! Our day ended 8 miles later at Spaulding Mountain Lean-to where it was no warmer.

Stratton, ME
Once we managed to leave the comfort of our sleeping bags, we went over Sugarloaf and Crocker Mountain. Gumby had hiked ahead of all of us and we managed to borrow a phone from a day hiker to book rooms in town before they were all gone. It was Labor Day weekend. We decided not to tell Gumby and told him to make reservations knowing everything was booked. He was super bummed out. We wanted a room to watch college football since the bar closed at 8:30. Frisbee didn’t tell him until we got into Stratton. He gave Frisbee the biggest hug afterwards.
Gumby, Middle Brother and Cricket celebrated their 2,000 mile mark. I wanted to be happy for them, but given the severity of my leg pain, I knew my thru hike was turning into yet another section hike like last year’s. I wouldn’t be hitting my 1,000 mile mark until the next day.
We grabbed beer, checked into our rooms, then ate at the White Wolf Inn and Restaurant (where we would also be staying at). We spent the evening drinking beer while watching the Alabama/Florida State game. Alabama won; roll tide.

No Zero Day for You
Before resupplying at Fotter’s Market, we filled our bellies at the Loony Moose. 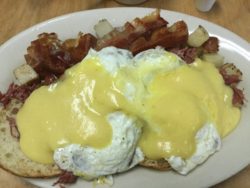 We were debating a zero to dodge the rain, but the decision was made for us when we couldn’t find any vacancy anywhere. We decided to hike in the rain and fog to Horn’s Pond Lean-to. Fortunately, the rain remained a drizzle until we got there. It would be another cold night. 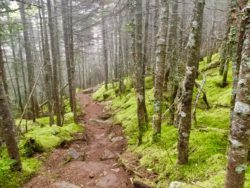 The Bigelows
The rain stopped, but the sky didn’t clear out. We wouldn’t be getting any views as we hiked over the Bigelow Mountains. 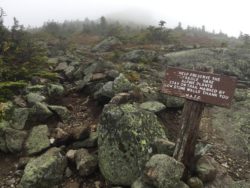 Once we crossed over Avery Peak, it started to clear up. We managed to get a nice view from “Old Man’s Head”. 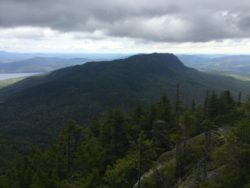 We got more views while going over Little Bigelow Mountain. 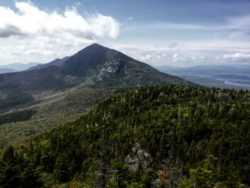 Our day ended at Little Bigelow Lean-to. We made a great fire!