The Dirt on the Trail: Chapter 16

Hobbling Around Maine
There was a Junco with a defective leg that would hop around the Little Bigelow Lean-to which I kept feeding. I guess it’s just the old lady in me. I seem to have much in common with the avian world lately. First the duck with the wonky leg in Rangeley, now the Junco. My right leg is still causing me trouble.
It was a warm morning (finally), and I got a head start on the guys since my injury has slowed me down. I wouldn’t get far since there was trail magic waiting at the road less than 2 miles into my hike thrown by the very funny and entertaining Maine AT Club. I regretted eating so much for breakfast at the shelter. 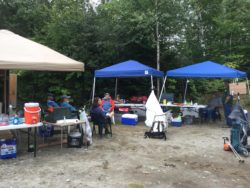 I managed to escape before the guys caught up and passed East Flagstaff Lake as well as more than the usual amount of wildlife. 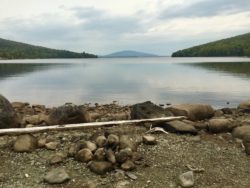 I saw deer, 3 toads, many red squirrels, a frog, a garter snake, and heard the loons singing by the lake.
I took a lunch break at West Carry Pond Lean-to and waited for the guys to catch up before hiking ahead of them again, passing ponds, beaches, and other scenery on the way. 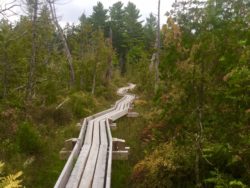 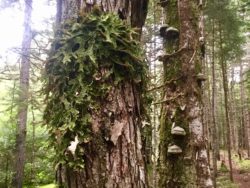 We stopped at Pierce Pond Lean-to, which had some very nice scenery of its own. 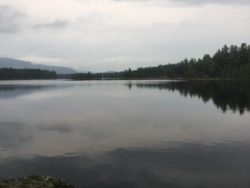 Taking the Ferry to Caratunk
I was relieved that it was going to be a short day. Hiking nearly 18 miles on a bad leg resulted in a painful morning. 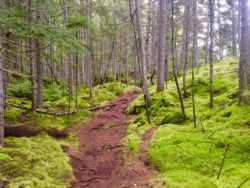 It was gloomy out and ended up raining on us as we hiked to the Kennebec River to wait for the ferry (via canoe) to take us across into Caratunk, ME. 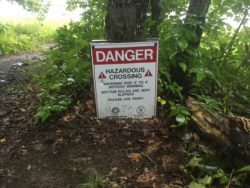 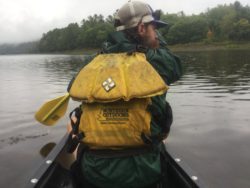 We had booked 2 rooms at Northern Outdoors, but they only pick up hikers at 11am. We tried hitching in the rain with no success. We’ve been pretty lucky getting hitches in every state, however Maine has surprisingly been the most challenging. We decided to hangout at the Caratunk House B&B which was a very well run establishment with a good resupply.
Northern Outdoors kept forgetting about us and kept confusing where we were, so we had to call them a few times before we got there. Fortunately, our rooms were ready, there was beer and burgers, and after we showered, we had a hot tub to hop into! 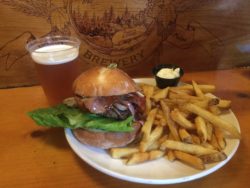 The guys got a ride to the store to get beer so we wouldn’t go broke at the brewery, and we hung out in our rooms the rest of the evening.

First Zero in The Forks
We decided to stay an additional night at Northern Outdoors. In an effort to get back to the store, Frisbee asked a random guest for a ride. His name was Nate and he was there for a job interview and said he’d take all of us as soon as he was done. 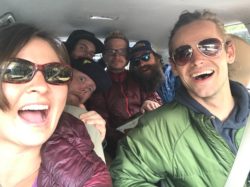 He took us to Berry’s, we got food and beer, and Nate invited us across the street to his trailer to hang out for a while. Nate was currently a white water rafting guide and was leaving West Forks, Maine with his girlfriend Vanessa in a couple weeks to head to Texas since his father was ill. 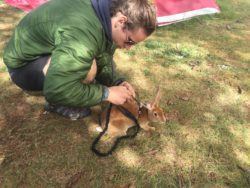 He introduced us to his pet rabbit, Moxie, and offered to take us rafting in the morning for free if he was able to pull some strings. Of course we couldn’t refuse!
We discussed our hike and that we’d be willing to pay for gas if he’d be willing to drop Cricket and the two of us off on his way to Texas. He was short on funds, so he was thrilled! He even asked if he could join us at the summit with Vanessa once we found out the date. 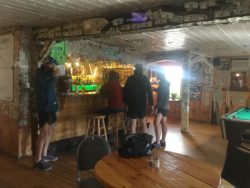 Later, we grabbed some grub at Marshall’s, then he came back to Northern Outdoors with us to soak in the hot tub and hang out in our room to drink a few more brews with us and some other hikers.

White Water Rafting Trail Magic
The next morning, we all met downstairs for breakfast and hoped Nate was able to pull those strings and take us all rafting. He delivered! He took all of us, with the addition of PCP and Bird Person to his place where he gave us life vests, wet suits and dry tops. One might ask, how many hikers can you squeeze in a Prius, bags included? The answer: 7 hikers and a driver (you can’t see us all, but we’re all there). 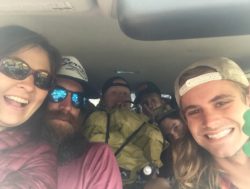 We dropped off his car, then we all crammed in the back of Vanessa’s van with the deflated raft and made our way to the drop off point. Then we geared up, pumped up the raft, grabbed our paddles and went on our adventure. 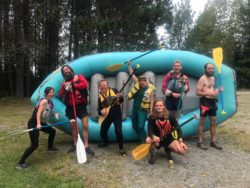 It was a blast! I was happy to jot that off the bucket list!
We drank a little at Nate’s, then partied at Marshall’s before watching Vanessa sing at another bar down the street. Nate let us tent at his place so we wouldn’t have to pay to stay.

Back to the Trail
It would be a short hiking day once we got back to the trail since we got a late start. We resupplied at the Caratunk House, then made our way to the Pleasant Pond Lean-to about 6 miles away. My leg would continue to concern me. Sometimes, zero days do more harm than help.

Trying to Force Moxie
I would get up early to get a head start on the guys, which would become an every day habit. The morning was brutal. My leg hurt working my way up and down Pleasant Pond Mountain, but I still tried to enjoy the view at the top. 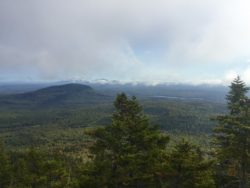 I would slip and fall down one of the rock slabs which jolted me into even more pain. I laid there for a while to pull myself together before hiking on. I was absolutely frustrated.
My morning would get better once I made it down to Moxie Pond. A group of locals, Larry, Pumpkin, Ten Hut, and Dave (aka Hummer), had trail magic set up. They made hot dogs, burgers, and also had chocolate, beer, and sodas. I was excited to try the Moxie soda I was too scared to buy. It’s the Maine soda even Mainers don’t like. 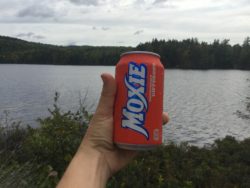 I wouldn’t buy it, but it wasn’t as bad as expected. It tasted like root beer with a strange aftertaste. The guys ended up catching up and joined us. 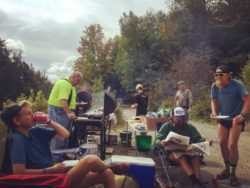 We struggled to escape, and eventually succeeded. 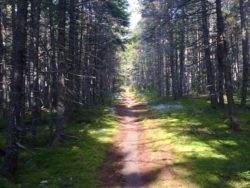 It was a good climb up Moxie Bald Mountain and I got turned around a few times due to re-routing, but the views were stunning at the top! 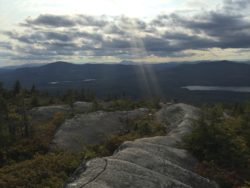 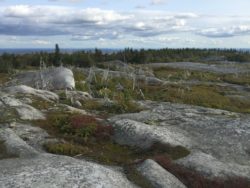 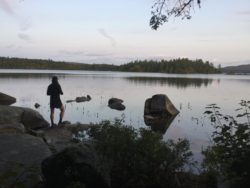 Making it to Monson
We all had to ford a stream and a river in the morning. Most of the guys got their feet wet, but I managed to monkey my way across. 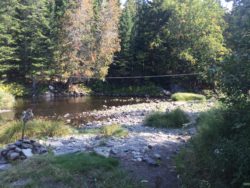 I met them for lunch at Horseshoe Canyon Lean-to, then we hiked on. My feet wouldn’t remain dry for long, there was one more river to ford and there was no avoiding it.
It took me some time to make it to ME-15 where we’d hitch into Monson, ME with a guy named Charlie. Charlie was posting signs protesting against the wind turbines that they were planning to put on top of the mountains nearby. He informed us the energy produced wouldn’t benefit Maine at all, but the state of Massachusetts.
He dropped us off at Shaw’s Hiker Hostel. We ended up getting a bunkhouse to ourselves which was pretty cool, and the couple running the hostel were great people. 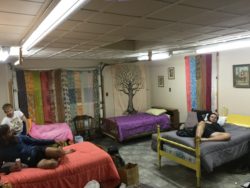 We would have considered zeroing if some of us were not pressed for time. It was getting late, so we decided to resupply and organize our food drop for the 100 mile wilderness in the morning, because now it was beer:30.