The Dirt on the Trail: Chapter 18

Last Day in the 100 Mile Wilderness
There was a beautiful sunrise over Jo-Mary Lake before I got my day started. 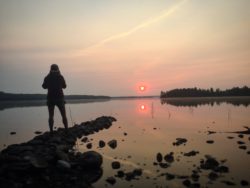 We planned on hiking to 22 miles, so I needed to be sure I’d be done before dark. The trail was mainly flat which made it doable. Four miles in, I got a nice view of Katahdin from Pemadumcook Lake. 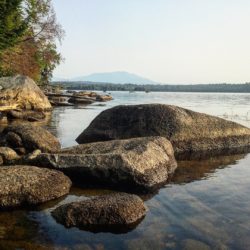 It would be an early lunch, but the mellow terrain I had been enjoying was going to switch into some climbing up Nesuntabunt Mountain, so I enjoyed the view from the beach along Nahmakanta Lake as I ate. 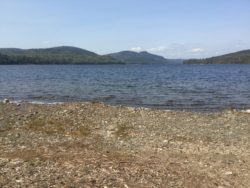 The trail followed along the lake for a while, then went between cliffs resembling a scene from Jurassic Park. The climb was steep, but not terrible. I took the short side trail to get a view from the lake and a different view of Katahdin. 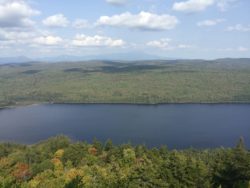 I hiked down the mountain and made my way passed several ponds and rapids before reaching Rainbow Stream Lean-to. The “baseball bat” floor would be uncomfortable, but it would be our last night in the 100 Mile Wilderness. The guys caught up 45 minutes later.

Abol Bridge
We’d only have to hike 15 miles to get to Abol Bridge, but I still got up early. My leg was still bothersome, but the terrain was mellow and I was eager to get out of the 100 Mile Wilderness. We only had 2 more nights planned before we would all summit Katahdin, and it was reassuring to see a view of it on top of Rainbow Ledges. We were getting close. 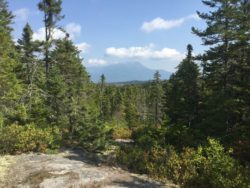 After eating the remains of my food bag, I only stopped to sip water. I was overjoyed to see Frisbee and Gumby ahead and to hear them cheer me on. I was finally out of the wilderness!
We waited for the others so Frisbee could show everyone where the stealth site was. After everyone’s tent was pitched, we crossed Abol Bridge, passing an even closer view of Katahdin to get to The Northern Restaurant. 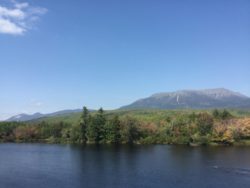 It was time for some hot food and cold beer! 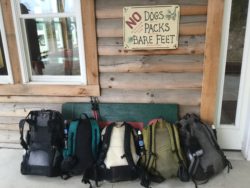 Once we ate all the food, we resupplied and got more beer at the convenience store next door. We ran into Family Man and his dad who was joining him for his summit. They had gotten a camp site across the street and invited all of us over. We eventually moved the celebration back towards our site, then called it a night.

Baxter State Park
There was only 10 miles left to hike to get to Katahdin Springs Campground and the terrain was flat, so most of us were in no rush. We ate breakfast and lunch at The Northern Restaurant before preparing to hike. Gumby had reserved a site back in Monson for the 5 of us. Since the site only allowed a maximum of 6 people, PCP and Bird Person had to leave a little before us to reserve a spot at The Birches. I followed shortly after so I could take my time. 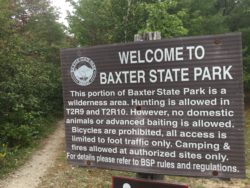 I was relieved that I only had 2 more days of hiking on my injured leg, but sad that it all was coming to an end. 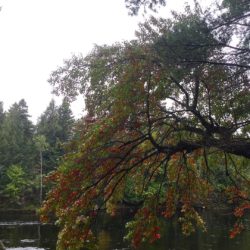 I enjoyed the scenery and even took some of the side trails to see the waterfalls. 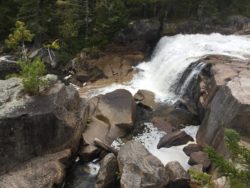 I didn’t anticipate all the day hikers since I didn’t realize at the time how close I was to several of the park’s campgrounds. I also didn’t anticipate the moose standing on the side of the trail as I was walking along the outskirts of a pond about 2 miles from Katahdin Springs! 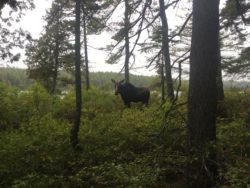 I kept my distance and waited for the guys to show up so I could wave them down. This was my second moose, but most of the guys hadn’t seen one yet. She was staring intensely at the pond and hardly paid me any mind. I backed up when she started walking towards me, then stopped on the trail. She was still not really concerned about my presence, and just stood there, staring up the trail. 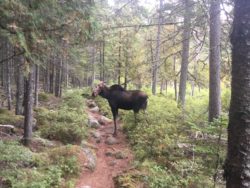 She stood there forever. Even if I didn’t want to wait for the guys to show up, I couldn’t hike on. She was blocking the trail.
Eventually she moved on, but stopped about 100 yards ahead of me. I stayed put. I could still see her, but wanted to warn the guys. About 45 minutes passed. Still no sign of them and I heard day hikers coming from the other direction. The moose heard them too and was on the move. She ended up getting in the pond where she swam around and ate the vegetation that was floating on the surface.

Finally, the guys showed up, so I waved them over before she swam off. We watched her a while before the day’s final stretch. 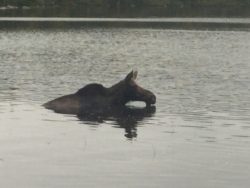 Before setting up at our site, we registered at the ranger station. PCP and Bird Person visited and we enjoyed a fire as we planned the morning ahead. We decided to start our hike at 5 am sharp.
Cricket, Frisbee and I were a little concerned that we hadn’t seen Nate and Vanessa who were going to hike with us to the summit, then drive us home the following day. There was no cell reception. We knew hitching out would be simple enough, but we hoped they hadn’t drove the whole way here and thought we weren’t there. There wasn’t much we could do about that.

Summit Day!
Today was the day we had all been waiting for! I slept horribly, so getting up at 4 am was difficult. PCP and Bird Person showed up, but still no Nate or Vanessa.
I struggled hiking in the dark, but took my time. As we climbed, the sun slowly rose up in the sky. I was happy when I finally got to ditch my headlamp. The higher we went, the better the views! 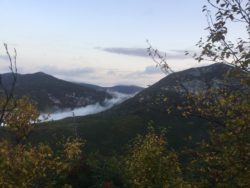 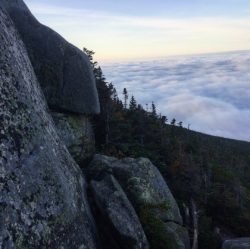 It was a rock scramble up, but we all took our time. The scenery kept getting better and better! 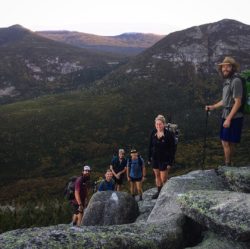 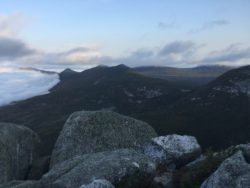 The clouds were still sitting on the summit as we approached it, and there it remained as we made it to The Gateway where the trail briefly flattened out. 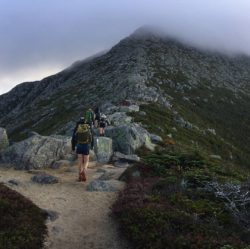 As soon as I heard Gumby yelling, I knew the sign was in sight! We all touched it for the first time together. It was an epic moment. We were done! A photo shoot followed, of course! 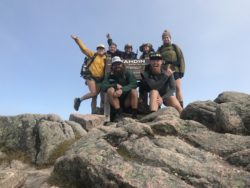 We snacked on the side of the mountain where the wind wasn’t blasting us and watched as the clouds cleared little by little. 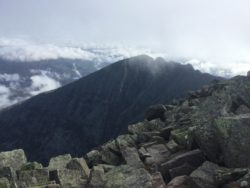 We got some group photos then made our way down. The wind calmed down enough that the others decided to turn around to hike Knife Edge. I didn’t trust my balance enough on my bad leg, so Frisbee and I went back the way we came. We were glad we did because as we slowly descended, we crossed paths with Nate and Vanessa! They wanted to finish the climb, so we said we’d meet up with them when they were done.
It took me forever, but I made it back to camp. I was starving so we left a note on Nate’s car and hitched into Millinocket with a guy visiting from the Czech Republic. Everyone was waiting for us at McDonald’s when we arrived.
We had a room booked at the Katahdin Inn, so we feasted, grabbed beer, then got to celebrating!

Farewells to Trail Family
The morning was bittersweet. It was nice to be done and to finally go home and rest, but it was hard to say goodbye to the people who had become our family. After breakfast, Cricket, Frisbee and I said our farewells before taking the long journey home. 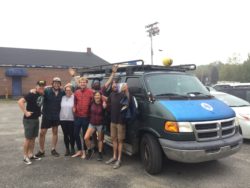 I know we’ll all remain in touch, and this ending is just the start of a new beginning. 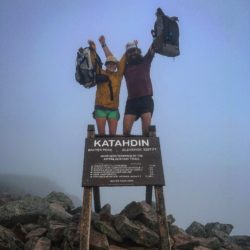 “Achieving your vision doesn’t mean you’ve reached the end of the line. It simply means that you’ve come to a new starting place.” ~ Qubein