The Dirt on the Trail: Chapter 6

New Jersey to New York and July 4th
The next day was short, but we finally got to see some bears. After hearing about how many bears are in New Jersey and not seeing any, we thought we might be leaving the state disappointed. The second one we saw was huge, so we kept our distance.
We crossed the border into New York, then went southbound to take a side trail to meet up with Karma’s boyfriend, Mike. 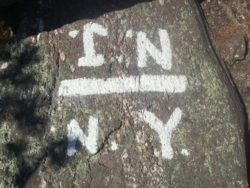 It was vacation living for the holiday in West Milford! They took us out for some good grub, and we toured Greenwood Lake on his boat before going swimming. We had a blast! After several beers and getting the local Mallard ducks fat by feeding them pretzels, we were getting hungry so we got burgers at a lakeside restaurant and watched fireworks go off once it got dark. We cruised through the night listening to Toto’s “Africa” at full blast. 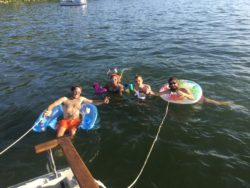 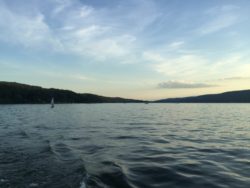 The next day, we ate some bagels, got all our “chores” out of the way with a trip to REI and the grocery store, then enjoyed some beers before hopping back on the boat to celebrate the Fourth of July properly. The rest of the evening was a blur, so I take it we all enjoyed our holiday.

Prospect Rock and Ice Cream
We said goodbye to Karma who had to go to work. They were super awesome hosts and we were sad to leave. Mike showed us a nice view of Greenwood Lake on our walk back to the trail and met us later with our packs at Bellvale Farm for some ice cream. There were a lot of nice views of the lake and blueberries to munch on along the way and we passed Prospect Rock which is the highest point in New York on the AT. 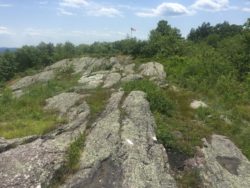 After our ice cream fix, we said goodbye and happy birthday to Mike, and only hiked 2 more miles to the Wildcat Shelter. It seems the bubble is creeping up on us. The shelter was pretty packed.

Blueberries and the Lemon Squeezer
We only hiked 14.3 miles the next day, but it was pretty brutal and seemed never ending. It may have taken less time if we weren’t so invested in eating all the wild blueberries. 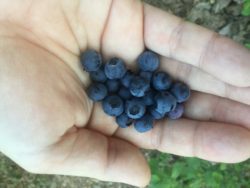 As we climbed up and down several mountains, we passed by numerous lakes and highways. Water was iffy so it was nice to see water jugs laying near several of the road crossings. We slid through the “Lemon Squeezer” and climbed several cliffs before we reached Fingerboard Shelter. 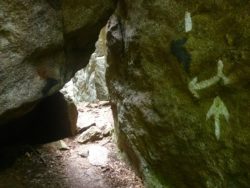 We heard there were a lot of bears in the area who have been tearing down bear bags and hoped our bag was hung well enough.

A Bear and NYC Skyline
It was raining in the morning, but we were glad our food bags were untouched. We decided to wait out the bulk of the rainstorm before hiking and got quite the entertainment as we waited. A medium sized bear started foraging up towards the shelter and spotted some bear bags hung up PCT style. He was determined to get the food, and wasn’t responding to our clapping. Once he was about to get them, Frisbee yelled and the bear took off. 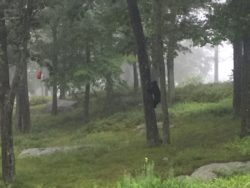 It stopped raining around noon, so we got our day started. We skipped Lake Tiorati Beach since we got a late start and it was too chilly for swimming, but we got plenty of nice scenery, including views of New York City’s skyline along our way to Bear Mountain. 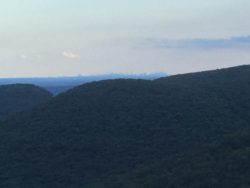 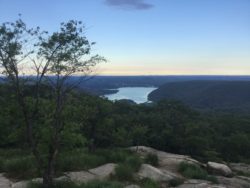 Perkins Memorial Tower was closed and I had sausage fingers from not using trekking poles, but all wasn’t bad. The view was nice and I scored a bonus Orange Powerade from the vending machine (my favorite flavor). We were going to stealth camp by the tower, but security was driving around, so we walked a half a mile down the mountain and found a spot for the night.

Fort Montgomery and Trailside Zoo
We knew the Trailside Zoo would be closed, but weren’t anticipating even more poorly maintained trails on the blue blaze towards Fort Montgomery. New York’s trails have thus far been poorly marked and overgrown with weeds. 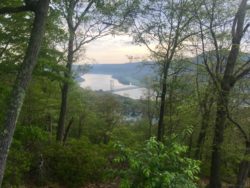 We humped it to the Bagel Cafe where we ate breakfast and stunk up the joint for a couple hours (food was great by the way). Afterwards, we resupplied at the Chestnut Mart which had overpriced and limited products, however the cashier hooked us up with some free goods and added a few bags of jolly ranchers for each of us. From the parking lot, we snagged a ride back to Hessian Lake so we could walk through the zoo. It was small, but better than expected. The Bears seemed less depressed than we had heard from last year. 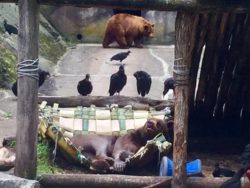 A lot of the animals were rescued from various scenarios; some struck by cars, others shot or abandoned after birth.
We exited the zoo to cross the Hudson River, then back up the mountain. 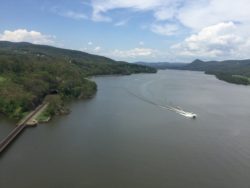 New York’s trail maintenance has been disappointing so far and there’s also been a lot of trash on the trail. I’m hoping it’s just because there’s so much human traffic since we’re so close to the city. New York has been bumming me out. After a long break at a much better stocked quickie mart with a deli (really regretting my resupply) and a wasp sting on my leg, we made it to Graymoor Spiritual Life Center where there was free camping in the ball field. Early in the night, we could hear a concert and fireworks echoing in the distance.

The Beach and a Cankle
A large group of people showed up in the morning to play football (the soccer kind), so we watched and rooted for the Rojo team a while before returning to the trail. I was sick of having sausage fingers and my left leg (the one that wasn’t stung), has been hurting a bit, so I decided to use my trekking poles. My speed increased significantly! Just like the rest of New York thus far, I had to stop 20 times to locate the poorly marked white blazes, and had to reroute around the many fallen trees on the trail. 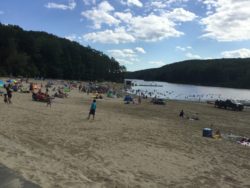 Eventually we made it to the beach at Clarence Fahnestock State Park, but wouldn’t stay long since we heard there was trail magic from a guy named Joe at the campsites. I regretted not packing Benadryl since the wasp sting had taken a turn for the worse. I had quite the cankle. 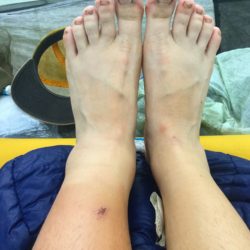 Joe made us egg sandwiches and provided soda after we squeezed into the AT hiker designated area. I begged the other hikers for some antihistamines and managed to get several Diphenhydramine packets. It was a Sunday so I would have to wait until morning to see if I could get meds sent to the pharmacy in the next town. I hoped my shoe would fit in the morning.