The Dirt on the Trail: Chapter 9

Dalton and Cheshire, MA
We all slept pretty well at the Cookie Lady’s place. Elmer Fudd, Bubba, Bobo, Frisbee, Gumby and I took turns mowing the yard, a favor for Roy, before we hiked on. 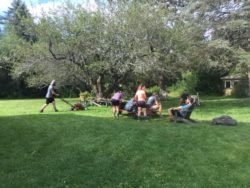 We took a break by the power lines before hiking into Dalton, MA where we hitched to the Taco Bell on the other side of town. Our crew slowly accumulated nearby at Barnes and Nobles where we all lounged for a while. We got separated at this point since the bulk of them were taking it easy as we pressed on and passed the campsite they planned on stopping at. The guys pushed ahead of me to Cheshire, so I stopped to take in the view at The Cobbles. 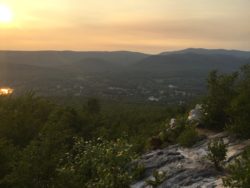 It would have been nice to see the sunset, but St. Mary of the Assumption Church, where we would be sleeping for the night, closed their doors around 9. We ran back into Elmer Fudd and the Wisconsin Brothers there.

Mt. Greylock and Watermelon
After getting breakfast at Dunkin Donuts and playing with a whoopie cushion in Dollar G, we started our climb to Mt Greylock, the highest peak in Massachusetts. 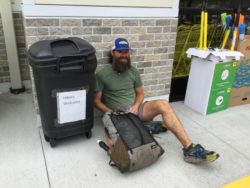 The climb wasn’t as bad as the rumors, and we passed a cute little cabin on the way. 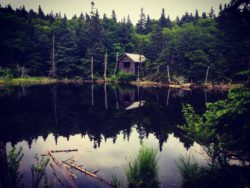 I was a little bummed out that the Lookout Tower was closed. So far, all the towers in the north have been shut down. This time it wasn’t off limits or due to a government shut down, but under construction. 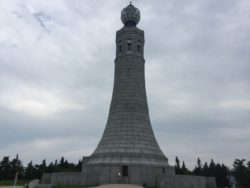 We stopped on the hill for lunch and there were a bunch of people walking around with orange shirts on. One of them approached us and I chatted with him a while. They were all part of the “High Pointers Club” and they hold conferences annually at different state “highest point” locations. They were kind enough to share their watermelons with all of us. 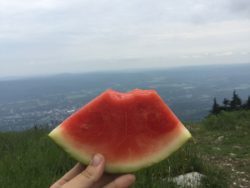 After pushing on, we reached North Adams, MA. Even though it wasn’t far, we hitched to the Papa John’s since they provided a “half off” deal for hikers.
We got a few beers from the discriminating liquor store next door (The guy working there was not hiker friendly and a total boner), then we hitched back to the trail. We passed a super creepy scarecrow and a bridge suitable for “The Blair Witch Project” before hiking a couple more miles to Sherman Brook Campsite. 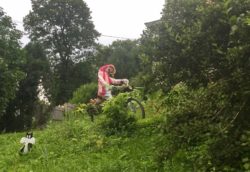 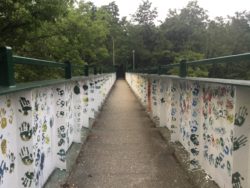 We celebrated Elmer Fudd’s belated “Dirty 30” properly with the beers we packed out.

Welcome to Ver-mud
It was a cool, cloudy day, which was rather nice after all the humidity we’ve been dealing with lately. We crossed into Vermont and I would also hit my 600 mile mark that day. 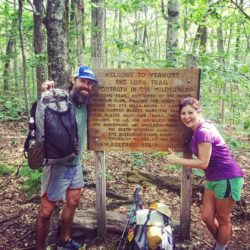 Our hike was nice excluding the confrontation with 4 dirt bikers on the trail. Gumby nearly got run over and when I tried to explain to the guy in front that they were on a “footpath only” trail and should turn around, the guy insisted dirt bikes made the trail and asked me, “What are you doing hiking way out here anyway?” I lost patience and responded, “You’re riding on the Appalachian Trail you idiot!” To be fair, after hiking on and following their tire tracks, it appeared they creeped up on the trail after following the power lines and there wasn’t a sign posted there to inform them not to ride there. I just hoped no one got hurt due to their ignorance.
We passed an “infinity pool” made by beavers before stopping at Congdon Shelter. 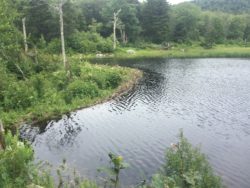 The guys were waiting on a package in town, but it was Sunday, so we called it a short day.

Bennington, VT
We hiked an embarrassing short day. It was a very cold, very wet day. If it were warmer, maybe we would’ve pressed on as we intended. We got a hitch into Bennington, VT by the wife of fellow thru hiker, Subway who was temporarily slack packing her husband. She dropped us off at Walmart, we shivered as we resupplied (I briefly lodged myself under the heat lamp with the rotisserie chickens), headed to McDonalds to eat, then called it. We stayed at the Knotty Pine Motel nearby where we got hot showers and cleaned our wet, stinky clothes.
Later we heard Bobo, Lil Wayne and Sir Pass Alot made it to town and met up with them for some brews and grub at Madison Brewing Co. 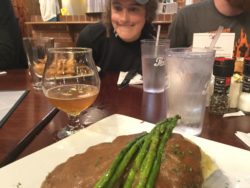 We were there a while and luckily got a ride back in a Range Rover. We were glad we had showered first.

A Zero in Bennington
”Twas a slow moving morning. It was cold and drizzling too, so we weren’t feeling so motivated. After we checked out, we went to South Street Cafe and Bakery where we ran back into Primo. He needed to resupply so we followed him to Family Dollar. As he got his food bag together, I investigated a giant chair across the street. 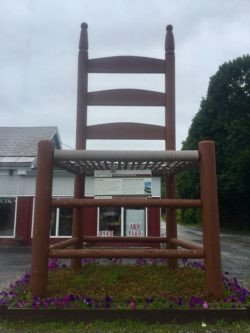 We headed back in town to eat lunch at Ramunto’s Brick Oven Pizza then were surprised to run back into Chestnut who we were afraid we wouldn’t see again. He was done his section hike for the year counting American Chestnut trees along the trail. We all checked out a toy store that had a lot of instruments to play with, then called it a zero after running into more hikers.
We all hobbled up the street to Catamount Motel where we split a room with Gumby and Primo. The place was nice, but after seeing a few shady characters walking around town, I questioned if the plastic bag of powdered potatoes would result in a broken window.
Before recruiting more Tramily to the motel and getting beer, we had a drink back at Madison Brewing Co. and got Chinese takeout. 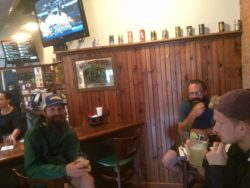 We drank in the motel parking lot and some weirdo who was staying there with his wife tried to sell us flashlight knives and tasers.

A Day of Views
We all crammed in Friendly’s for their half off breakfast deal in the morning and Chestnut was kind enough to buy everyone’s meal. We said goodbye to him and prepared ourselves to leave. 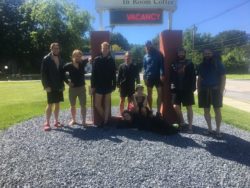 The motel owner took us back to the trail and we got moving.
We ate a late lunch at the Lookout Tower on Glastenbury Mountain. I was thrilled that the tower was open to climb and even more so when I saw the amazing view! 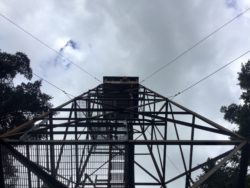 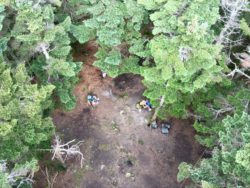 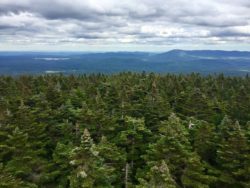 So far the mud hasn’t been so bad (it actually feels good on my joints), and I’ve been loving how green and lush Vermont has been. 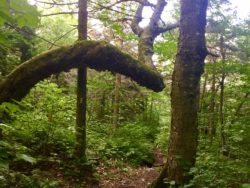 We stopped at Kid Gore Shelter which had a nice view as well. It was a cool night in the shelter. 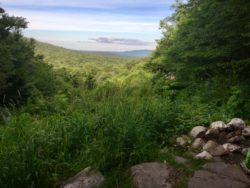