Another rainy day where we mostly dodged the bullet, i.e., we got rained on some, but enjoyed a great deal of hiking time without rain.

The full moon was just rising as we set off, and though it played peekaboo with the clouds it made hiking in the dark a trivial exercise.
Another fun day of hiking, really. A lot of the usual things; Lucky tried to make friends with various cats (not so much luck today), we stopped once in a bar (not like bars at home, though some overlap), I hiked a good part of the day alone, taking some photos along the way. Etc.

One meaningful moment was about halfway into today’s hike, when I got my first view of the sea. From there on, of course, we saw it a lot.
When we got fairly close to the town (Fisterra) we were on a sort of boardwalk near the beach. Lucky started ahead on the trail, while Milky and I detoured to put our hands into the ocean, as a sort of “essentially there now” moment.

Fisterra from a distance as I start to walk along beach

Lucky turned back, saw what we were doing, and apparently decided that we were going to walk along the beach instead (?).    So I did that, following him after a bit, while Milky decided that he wanted to stay on the marked trail.

I’m glad that I walked the beach. Very windy, but a great way to finish out the day. And as a big bonus, we ran into Heinrich and Gerd (apologies, as I had been getting Gerd’s name wrong in previous blog entries). They had bussed to Finisterre and were just walking along the beach. Very nice to see them one more time. 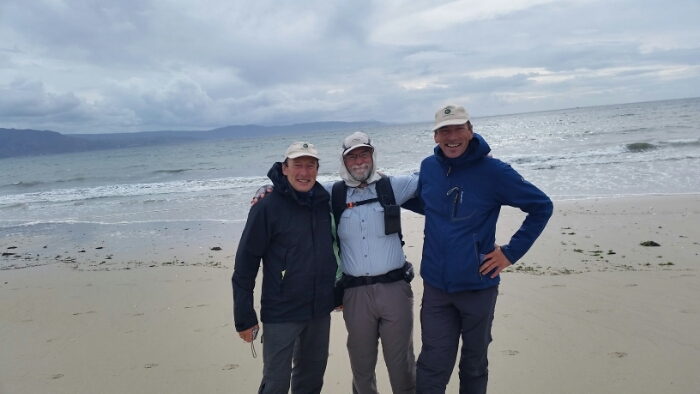 Heinrich, me, and Gerd

Unfortunately, the three of us had quite a time reconnecting, each doing what seemed to make sense, but there was some extra wandering around before we found each other.

Of such things are adventures made, I guess.  We did run into Ignacio during our wandering around, so that was good.

We also went to get a different completion certificate, this one for those that continue on to Finisterre, just because we could, I guess.

While there we encountered a Spanish woman in red rain gear with a racing type of dog (a whippet, Lucky informs me) in matching red rain gear, even with its own hood.  Very cute. She told me that since they’re from Andalucia – – where it rarely rains – – the dog wasn’t used to, nor is a big fan of rain. 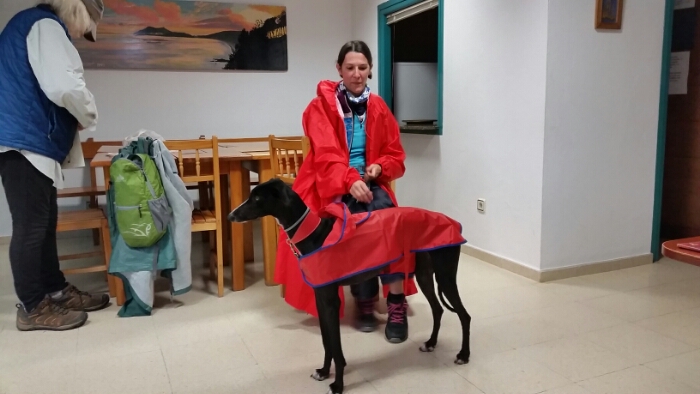 After we settled into our Albergue, we went to visit a sort of tourist thing, the Lonxa (Lonja in Spanish).

This is an active fish market where there’s a daily auction of freshly caught fish. For 1 euro, you can walk along an elevated periphery and look down through glass at the buyers and sellers and listen to the auctioneer do his schtick.  We walked around the town a bit more, but the rain came again, so we decided that nothing but dinner (fish, of course!) would shift us out of our comfy dry Albergue. 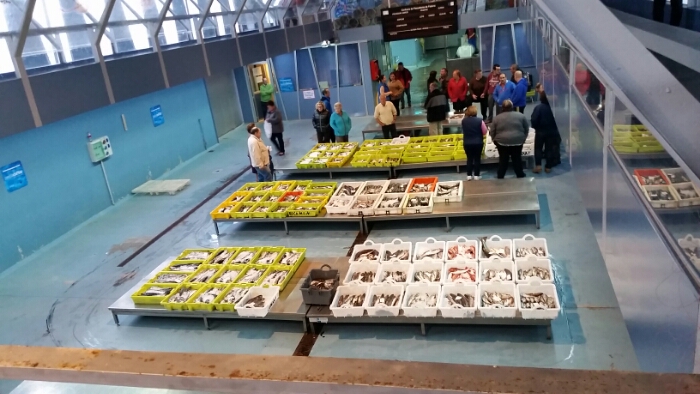 But of course we did shift for dinner, a pleasant celebratory meal. I had fish & shellfish soup followed with garlic prawns. We chatted at the bar beforehand with Leo and three pilgrim women that we knew slightly (Lisa, Barbara, and?). I mention these names just to reinforce what a very social trail the Camino is.

Then partway into our dinner, Vladimir showed up and joined us. He said that he’s going to on to Muxia.

Since the day wasn’t as bad as forecast, and the next day looked no worse, Milky decided to continue hiking to Muxia, whereas Lucky was disinclined to hike in any more rain, and so opted take a bus back to Santiago.   I decided to continue hiking with Milky as, what’s a little more rain to a Pacific Northwest boy like me? The plan then is that we’ll reconnect with Lucky the following day in the room-for-three that we reserved earlier.

So the next morning, (Wed Oct 28th), we all three hiked the couple or three kilometers to the lighthouse at the “furthest point west”. We had deferred this in favor of the fish market visit (only possible in the late afternoon). This includes the “milepost zero” Camino marker. 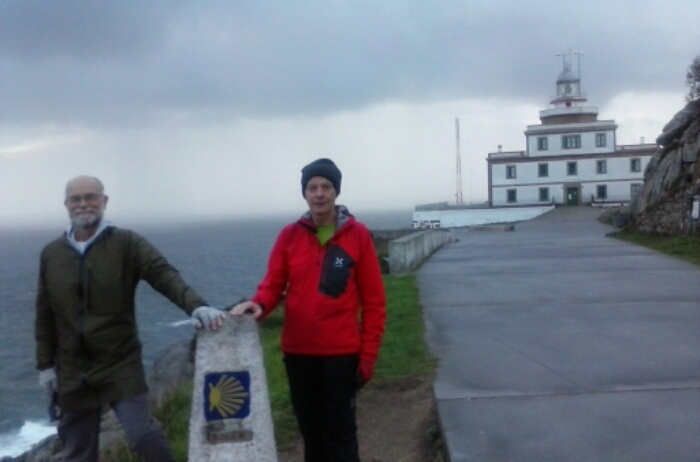 It’s also where pilgrims traditionally burn their clothing, but in fact we saw no naked pilgrims en route back. Good thing, as the morning wind off that exposed point was fierce.   We did see various burn marks about, but good luck starting a fire on the rocks in that wind.

Then we retraced our steps, Lucky beat feet to catch his bus – – and we presume that he succeeded, as he wasn’t to be seen when Milky and I walked by the bus stop.  And from there, Milky and I got a late start out of Fisterra towards Muxia.

The weather turned out, once again, to be a lot better than one would guess from the forecast. Some rain, a good bit of wind, but we were okay in shirtsleeves for most of the day.

Some views of the coast, but forested inland views for the most part. In fact, I’m confident that we saw more trees today than on any other day of the trip. 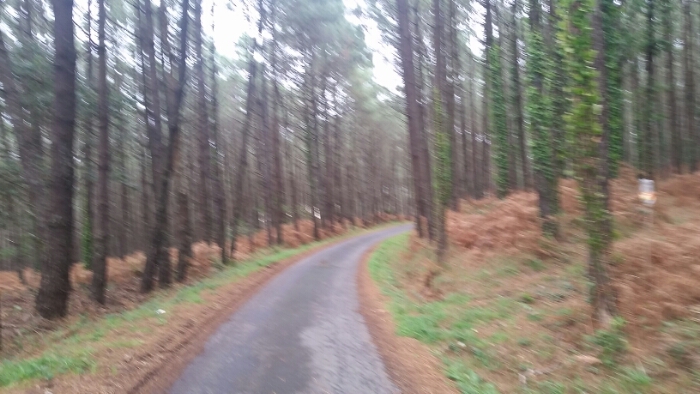 In fact, we saw a sort of reverse “soup-to-nuts” forest products process as we walked. A couple of places early on we saw some new house construction: rare in Spain these days, but I guess there’s still money for such things in touristy coastal areas. Then we came across a sawmill operation with a lot of finished lumber stacked, with that fresh cut wood smell pervading the air. 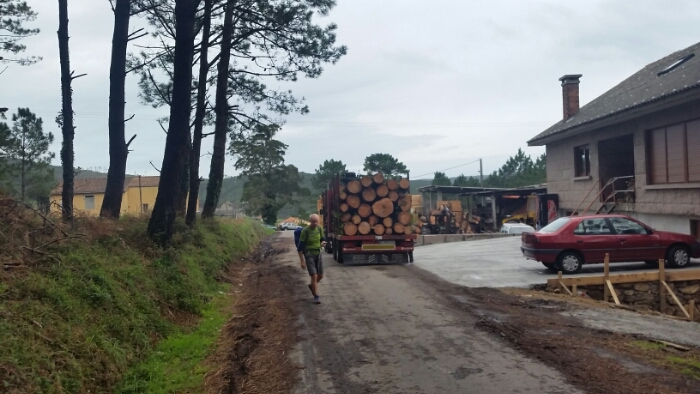 Queued up on the other side of this sawmill / lumber yard was a modest sized logging truck, full of decent sized logs ready to mill. Later in the forest we had to hurry our steps to find a safe place to step aside for another logging truck to go by.   Then later as we walked we heard the sound of chainsaws in the forest nearby.

Finally, we saw some fairly recently planted trees.   So: soup-to-nuts. In reverse.

Really, there seemed to be more of rural Spanish work-a-day sights today than normal. We saw a guy driving a specialized machine that goes through a cornfield and harvests the corn while simultaneously cutting down the stalks. Pretty interesting to watch. 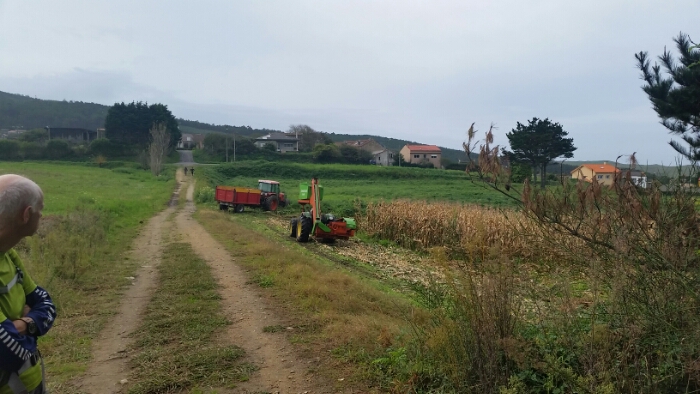 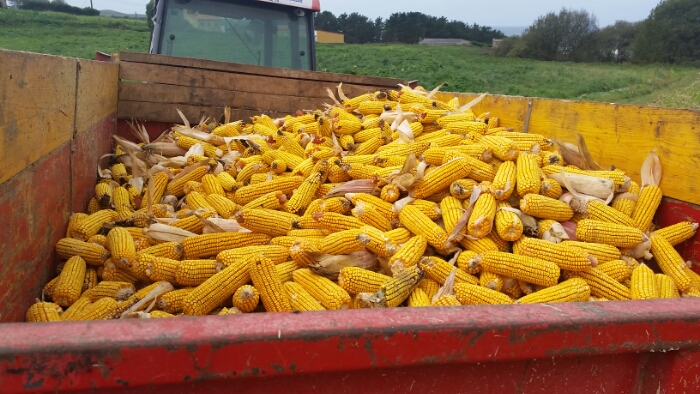 We got almost to Muxia before rain began in earnest, and had we been quicker to select an Albergue, we would have gotten in almost dry. So perhaps Lucky has the last laugh just for the final 10 minutes of our hike.   Well and for additional wetting as we stumbled around looking for a grocery store later, and for our bus stop for tomorrow.

And so now we’re really done.  Milky and I will bus to Santiago tomorrow morning early, and then spend 5 days or so based out of there, with one or two days bussing to see other parts of Galicia. 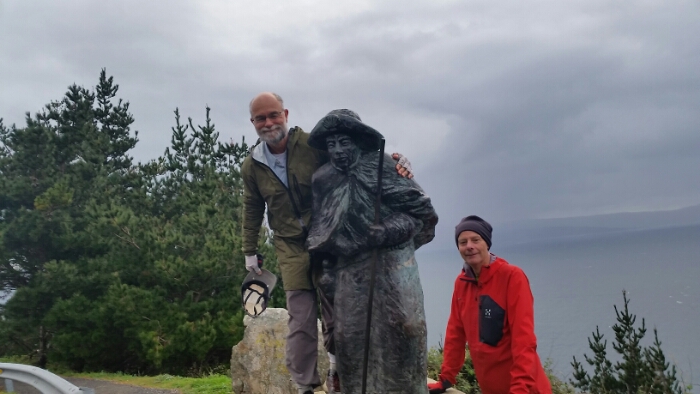 I will try to put together a post-trip summary of data, and maybe a note or two about how we spent our free days in Santiago.   But insofar as this blog is about hiking the Camino… we’re done.

And it was very much worth hiking a second time!  Sometimes one finishes a long distance hike feeling very ready to quit having to walk for many hours per day, but we both felt quite content today to be hiking a bit more. I guess if I ever get truly tired of it, I’ll take up a new pasttime.   Quilting? Extreme Ironing?  (yes, this is a “thing”, google it). For now, I reckon I’ll just keep walking places.