I woke up early, around 5:30, and was wide awake so I started quietly packing up my stuff. I was on the top part of the shelter so I had to be extra quiet sneaking down the ladder with my stuff in hand. It was pitch dark so I made some hot cocoa while I looked at my maps, planning for the day. When the sun rose, I packed up my stuff and headed on my way.

About 0.5 mile away from the shelter, I noticed my pack felt lighter than usual, even with 1.5 L of water. I started a mental checklist and then ripped off my pack to confirm my fear: my sleeping bag was not in my pack!

Out of all the gear I could’ve left behind, my sleeping bag was the absolute worst. I wouldn’t be able to survive a night in the 20’s without it. I left my pack on the trail and ran back to the shelter, where the other hikers greeted me smiling, my bag in hand, “left your sleeping bag, huh?”

I was kicking myself for loosing a mile of hiking, delaying my start time, and feeling generally foolish for not double checking the top bunk in the dark before I climbed down, but it could have been way worse. I could have realized it was gone when I unpacked tonight, 15 miles away! I feel like this was a small test to remind me to do one last walk around every morning.  I will definitely be double checking my pack before I leave from now on. 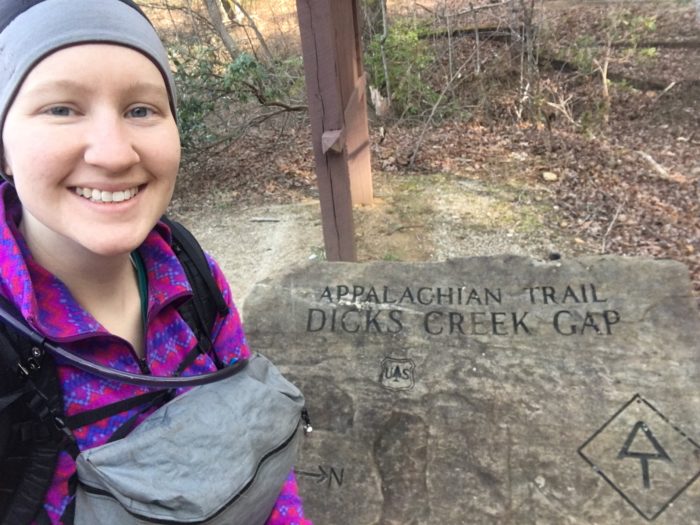 When I finally did return to my pack, I started up first hill of many that I had to climb today. I passed Dick’s Creek and the shuttles for Hiawassee, and I was envious of the hikers going into town. I plodded along for a couple more miles alone, and then on a steep climb while I was resting, I saw a hiker behind me. He caught up to me and introduced himself as Andrew. He is also married and his spouse is also cheering him on from afar. We hiked for a few miles together, talking about married life and trail life, and then he hiked ahead. 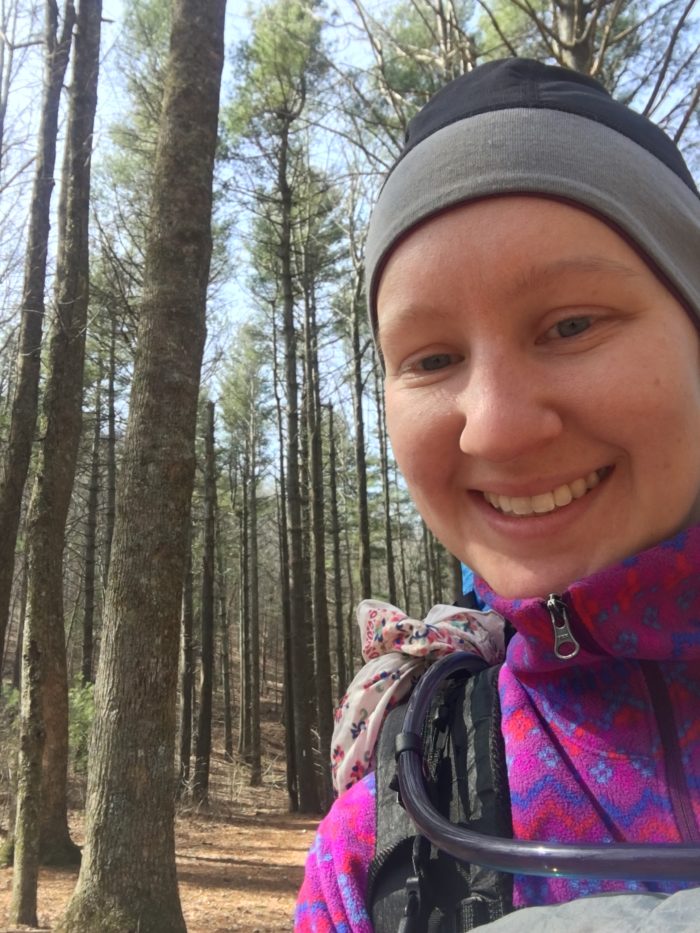 I passed two women from Cuba who were day hiking. They thought I was 16 years old and tried to feed me to make sure I had enough food. They were so kind that it lifted my spirits. I hiked on, passed Andrew, and then we met back at the Georgia-North Carolina border. I thought it would be a more spectacular milestone with fanfare, but all it consisted of was a tree with a small sign. Finally one state down! 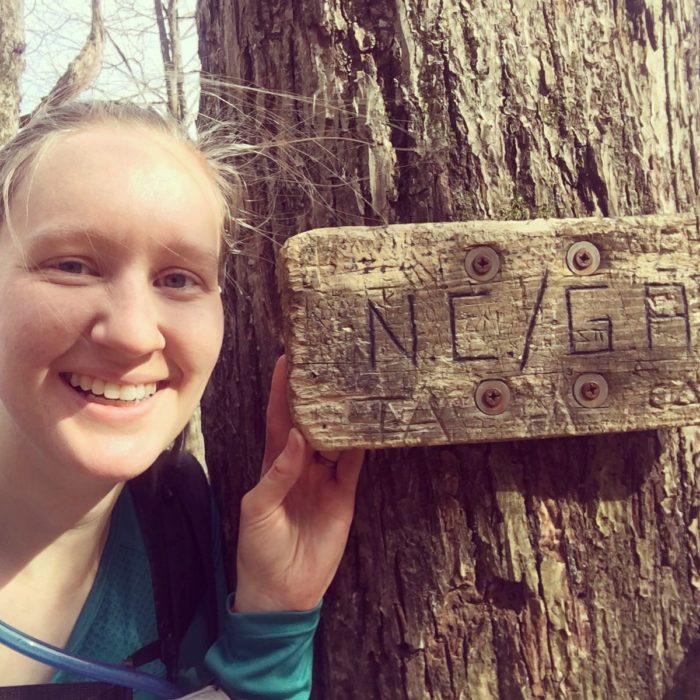 By the time we reached Bly Gap camping area 0.1 past the sign, I was exhausted. I thought about camping, but the enticement of the shelter a mere 3 miles down the trail pushed me and Andrew onward. I didn’t pay attention to the elevation change, however, and it was dramatic. The climb was steep, with log stairs so high they came up past my knees. As I was climbing, the sun started to set. The temperature dropped dramatically from sunny and warm to dark and chilly. I went from only my long sleeved shirt to a fleece plus rain jacket for warmth.

We made the climbs very slowly, stopping at intervals. This was the most exhausted I’ve felt yet on the trail, physically and mentally. Talking about Louis with Andrew all day made it so much more evident that he wasn’t here. We finally saw the shelter and filled up water at the big stream right before camp. Even though the shelter was mostly full, the other hikers graciously made a little more room for me. I was not in the mood to set up my tent or be alone.

Engine and Caboose were there along with a bunch of other hikers I’ve never met: Captain, Acorn, Earlybird, a brother and sister from Pennsylvania, and a few others. I felt like an outsider, though, since the other hikers in the shelter seemed to all know one another. Caboose and Engine were talking about the possibility of seeing snow in the Smoky Mountains with temperatures much lower than we were seeing now. They were preparing with microspikes and extra layers of clothing. I didn’t even know what microspikes were, and I was already cold in this weather, so I started to get nervous. Maybe I wasn’t cut out for this after all.

After the sun went down, despite wearing every single piece of clothing in my pack, I was shivering while making my dinner of mashed potatoes, sausage, and cheese. While I was waiting for my pot of water to boil, I was thinking about how much I miss my husband. I closed my eyes and felt the weight of the sadness hit me like a truck. For the first time since I started, I truly wanted to quit the trail. I didn’t feel I was prepared enough for the cold, and I wanted to leave all this loneliness behind and go home to my dogs and my family. Caboose, who I’ve only talked with once or twice before, must have figured something was off, because she approached me and asked if I was praying since I had my eyes closed. I told her no, that I was just mentally and physically exhausted.

I thought about what would be involved in quitting. Louis would have to drive the 2 days back down to Georgia to pick me up. I wondered where the closest town was that I could hike out to. Was it behind me or in front of me? I then thought about how many people are cheering me on. People from Facebook that I haven’t talked to in years are following my journey. I thought about how unaccomplished and defeated I would feel leaving. I pulled out my short “reasons for doing the AT” list and read it over a few times, and I thought back to the Angela Duckworth book about grit.

I gathered enough energy to shove my food and cookware indiscriminately in my food bag and hung my bag. I crawled into my sleeping bag in the shelter, pulled it over my face, and kept telling myself it would get easier and it would all be worth it in the end. 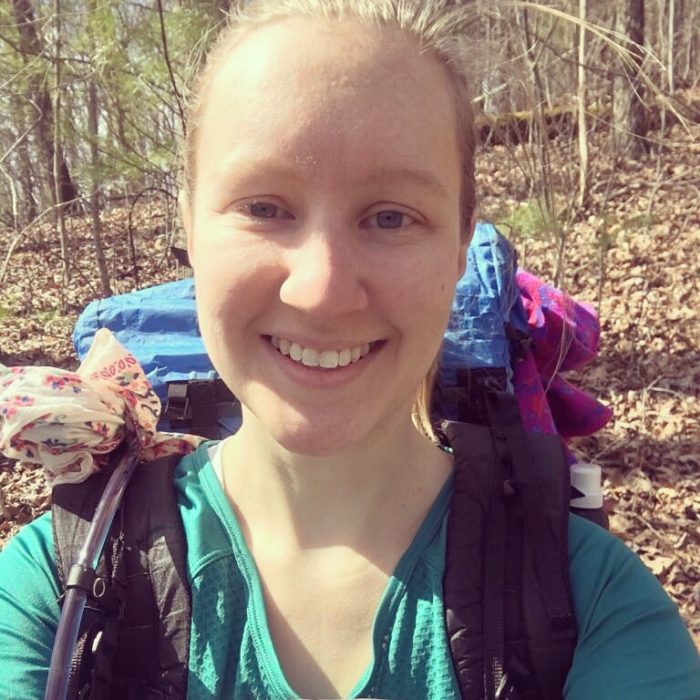 It will all be worth it in the end

Since I had such a long and emotionally taxing day yesterday, I decided to treat myself and let myself sleep in, all snuggled warm in my sleeping bag. I only had 12 miles to do, and compared to the last two days of 15+ miles, 12 felt like a breeze. It had rained a bit overnight and it was sprinkling when I got up.

I left around the same time as Kara and Kris (the brother and sister from Pennsylvania), so I hiked with them for a bit. I stopped when I had cell service and ordered microspikes and some a few beefier cold weather gear items on Amazon to arrive at the hostel where I was planning on staying when I got to town in Franklin. It was so cold my phone kept on shutting off, and the touch screen was barely working because of the rain. I had been stressing out about being prepared for the Smokies after hearing Engine and Caboose talk last night, so getting the order placed was a relief.

I was listening to music, plugging along, and if I needed to use my phone I used my nose instead of my fingers since my fingers were either gloved or freezing. Luckily, no one was around to see how ridiculous I looked. 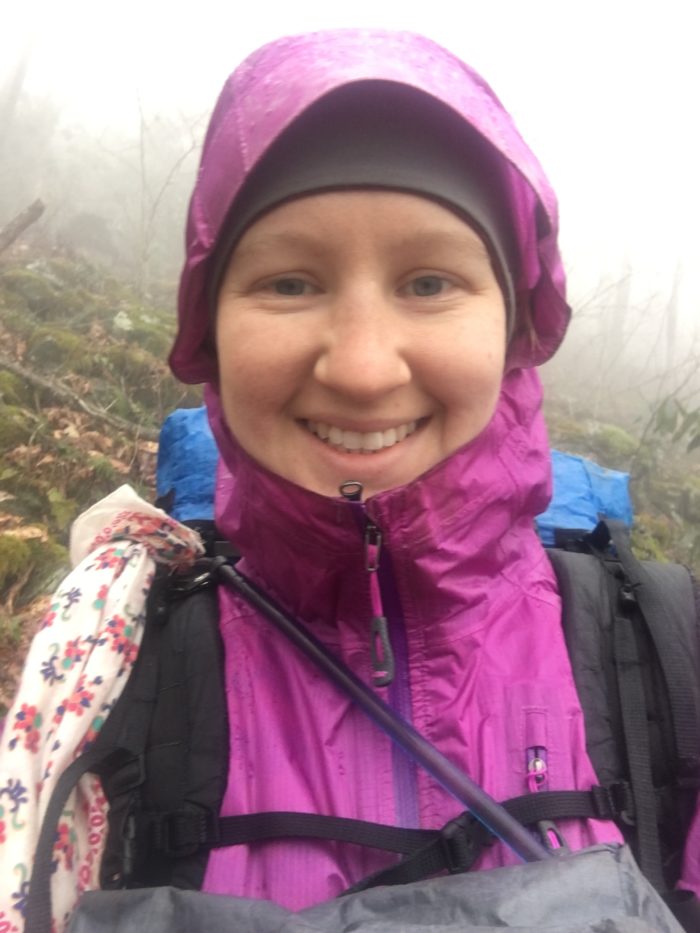 It was a nice hike once the sun came out, and it was relatively flat. I took a long, leisurely break for lunch and didn’t rush myself at all. I was lamenting the fact that I was on a deadline to finish in time for school to start, since the trail would be so much nicer if all days were like this.

Most of the forests today were full of pretty green little ferns and mosses, in the trees were covered in a pale green lichen, so even though they didn’t have leaves the forests were still green. The other forests I walked through were creepy remnants of charred and fallen trees. The forest fires that came through in December left their harsh, burnt mark. With the fog it felt like walking through a graveyard, so I didn’t linger. 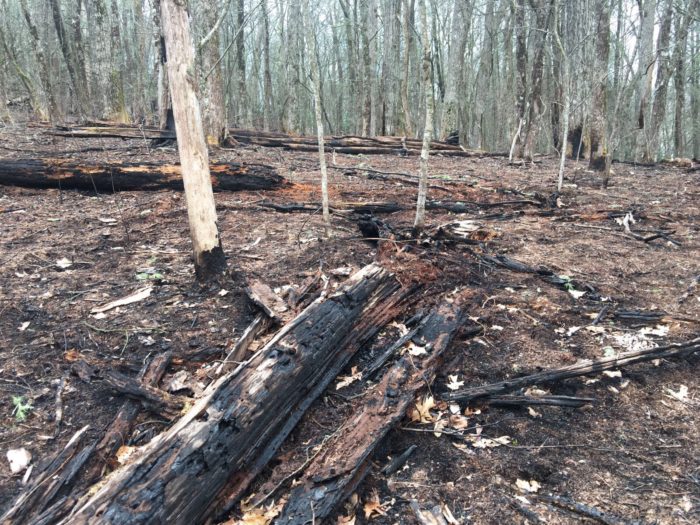 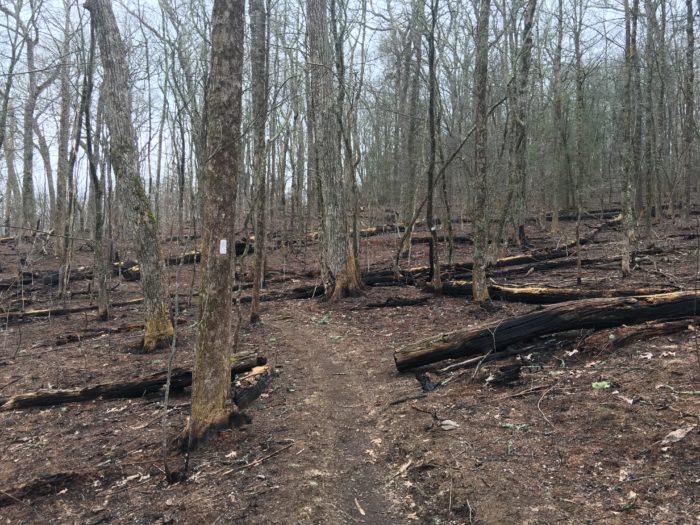 When I got to camp, the shelter was full since the forecast is calling for rain tonight, so I pitched my tent. Little Card gave me pointers on how to make my bathtub floor more elevated. My tent looked like it was set up by a pro!

I made dinner (my new favorite of mashed potatoes, hard salami, and babybel mozzarella), tied off my bear bag, and chatted with the hikers. A few of us still didn’t have trail names, so we were asked about embarrassing stories about ourselves. Besides leaving my sleeping bag at the shelter, I couldn’t think of anything noteworthy. The brother from Pennsylvania, however, had an allergic reaction to Permethrin after he treated his clothes before his hike, and was dubbed Rash. He embraced the name. A few minutes later, I pulled out my snack bag and started eating gingersnap cookies. I saw Earlybird watching me, so I offered him one. Then I thought it would be rude just to offer him one, so I went around and offered them to the whole shelter. Caboose then looked at me and said, “your name should be Gingersnap!”

I was planning on stopping in Franklin to charge my phone and resupply food. Hydration, Kara, and Rash (formally Kris) were thinking of going into town too, and the company would be nice. My charger is officially dead after giving it’s last breath of life to my GPS, and my cell phone is at 24%, so I’m writing this on paper and I’ll type it up when I get to town.  I’ve found days are emotionally harder to get through when I don’t have enough cell battery or service to talk to my family, so I’ll use a little bit of that 24% to see how they’re doing and save the rest to call the shuttle tomorrow. In one of the packages that will be waiting for me is another battery charger, which I desperately need for my emotional health on the trail.