Down Pours Down South

It has been a while since I last wrote here. I’ve been in and out of hostels with no wifi, and I have been hiking long miles causing me to be too tired to write. But I am now in Damascus, Virginia staying at the Broken Fiddle Hostel thanks to the recommendation of my friend Cascade who thru hiked in 2020. I’m taking a nero day and will be out on the trail tomorrow to tackle the Grayson Highlands. Here is a recap of my past week.

I left Standing Bear hostel at around 8:30 with plans to do an easy 20 mile day. Today I would be hitting the famous Max Patch area of North Carolina, so I was really looking forward to that. I hiked with two other guys that day, and we all made the climb together up to Max Patch. After doing a 30 mile day the day before I was feeling very fatigued. Max Patch was very windy, but it was the quite the sight. I can understand why so many people would want to camp up there (Max Latch is closed for camping this year). We ended our day with a hike to Catpen Gap campsite. We shared camp with three ladies from Florida who got to observe how three hungry hikers replenish calories at the end of the day. I can only imagine the shock watching someone combine ramen with instant mashed potatoes and calling it a day. I felt like an animal in a zoo.

I woke up early in the morning because I wanted to get to Hot Springs, North Carolina as soon as possible. I was joined by one of the other guys I was hiking with, and we did a 10 miles before 10:00. We got to Hot Springs around 11:00 and immediately hit a restaurant. We opted for a place called Spring Creek Tavern, mostly because they were the only place open at the time. It ended up working out because the food was delicious. The music selection for the tavern was great also. Allman Brothers, Crosby, Stills & Nash, Marshall Tucker Band, etc. I had a pulled pork sandwich some tater tots which satisfied my hiker hunger.

My friend and I considered taking a nero here, but I convinced him that we push on because we just were at a hostel a few days ago. Instead we decided to hang around town for a few more hours and then head up Rich Mountain in the evening. My Sawyer Squeeze had malfunctioned because I had twisted it to tight and created some sort of hole that leaked water when I poured. I bought a new Sawyer at the Outfitter store. One of the employees told me to watch out for a bear on top of the mountain that had stolen someone’s food the night before.

We spent the rest of the hours in Hot Springs on the side of the road popping blisters. I also had three soda bottles by my side. Since I was in the south I had to embrace the culture and consume the specialty drinks. I went to the local market and bought a Nehi peach soda, Cheer Wine, and RC Cola. I sat there in the side of the road drinking all three of those while simultaneously draining my blisters with a hot needle. I never felt more like hiker trash. The people of the town would pass and seem to not care. Something tells me they were used to this sight.

We started climbing up the 8 miles to Rich Mountain at around 4:00. Before the climb I quickly consumed a BBQ rib sandwich that I bought at the local market. That powered me up the mountain and by 7:30 we made it to the top. There was a fire tower at the top, so we decided we would sleep up there. We were joined by a few others on the fire tower. I got a beautiful sunset and a 360 degree view. However cowboy camping up at the top wasn’t as dreamy as it sounded. It was extremely windy, and I had a hard time falling asleep because of this. Regardless, the view was well worth the climb. 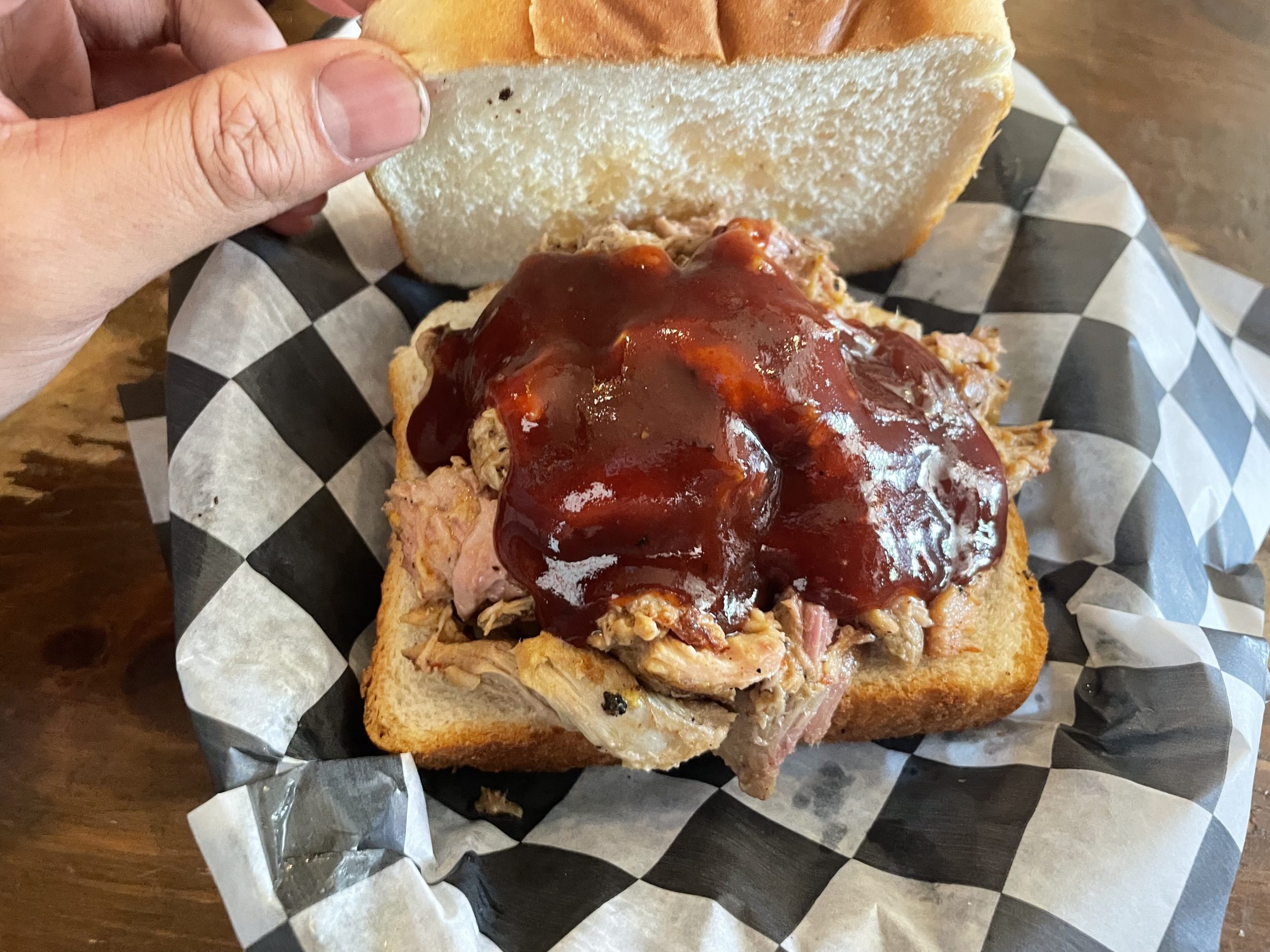 We slept in a little bit at the top of the fire tower to observe sunrise. The plan for the day was to get 22 miles. We made our way down the trail without a hitch. It was sudden, but when we reached Laurel Shelter it started to rain. We waited for a little bit underneath the shelter until it stopped. We then continued down the trail. We got to the junction of Whiterock Cliffs and had the decision to take the bad weather bypass route or the route to the exposed cliffs. We looked at the sky and saw some dark clouds but the sun was still beaming. We decided to take the scenic route, or what I like to call the “character building route.” Once we got to the exposed ridge a thunder storm broke out. Flash, Bang! My partner and I stood there completely exposed at the top of this ridge. We bolted down the trail and slipped on the slick, wet rocks. It started to rain as well. Eventually we made it under a rock that provided cover from the rain. We waited under there and regretted our decisions. It was now pouring down rain and the thunder and lightning wasn’t stopping. I saw a bolt of lightning strike a cell tower in the distance and a flash of light illuminated the sky. We stood underneath that rock for a good 20 minutes before we decided to push on. Eventually we got off the ridge and onto a lower trail. As we were on the trail we saw a wild turkey strutting down the trail as well. It was as if he was leading us to somewhere. We followed the turkey’s brisk pace and just as suddenly as it appeared, it disappeared. But we were now looking at the 300 mile marker of the AT. The turkey lead us to the marker (we want to believe this)! We stayed at Jerry Cabin Shelter. We met Blue Sky, Turbo, Socrates, and a couple called Spayeti. When the storm stopped we all roasted our clothes over the fire to dry. I had the great idea to use trekking poles and sticks to “BBQ” our clothes. It worked great. We were wet and cold, but we were in better spirits at the end of the day. 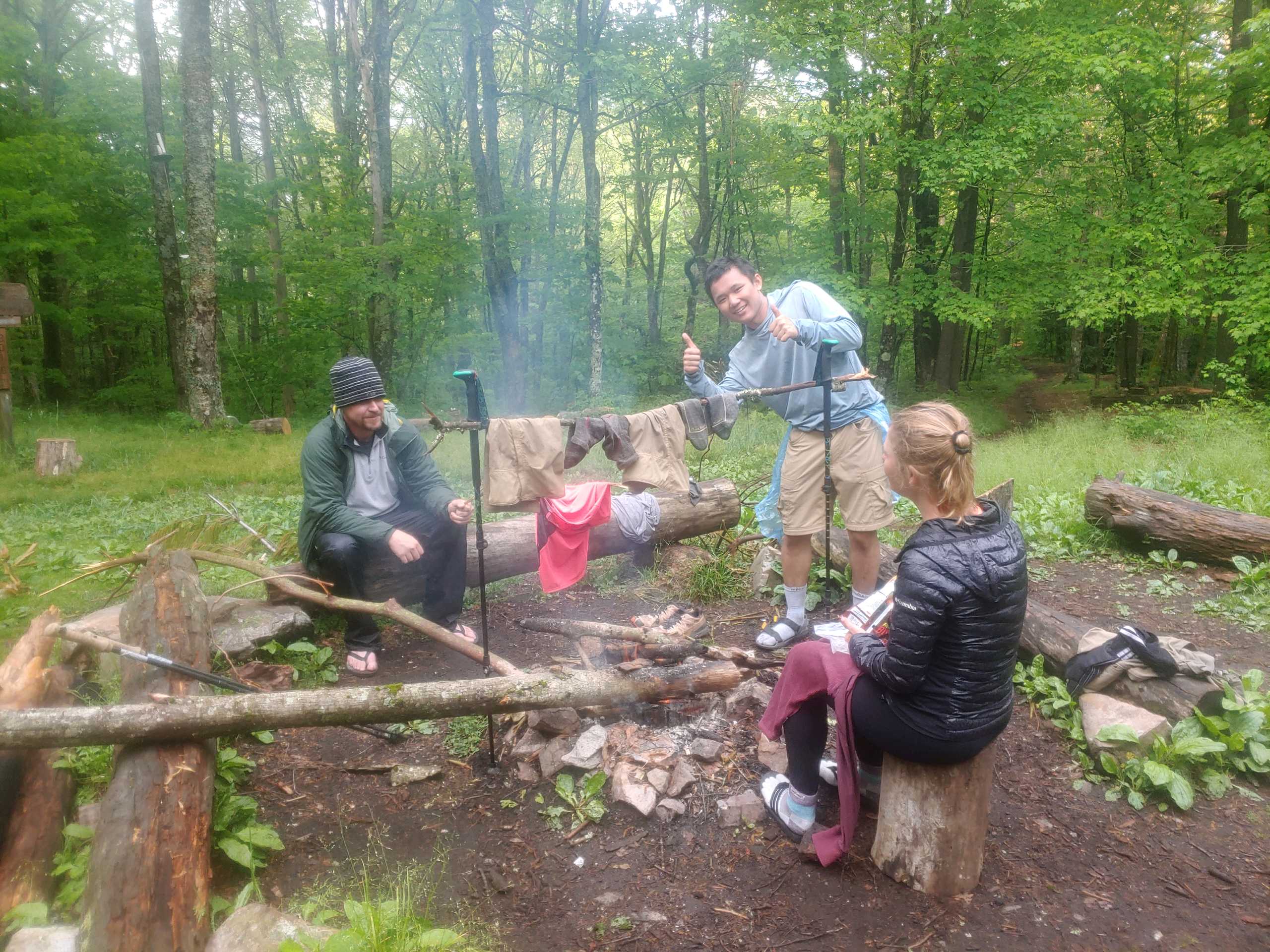 My partner and I wanted to go to a hostel now. We had wet gear, and we wanted someplace warm to sleep. We found a place called Nature’s Inn that was able to pick us up at Sam’s Gap. After mediocre climbs we got to Sam’s gap and was picked up. We were joined by two other hikers named Two Pack and Easy. Nature’s Inn was a really cool place. Because I had a partner I was able to split a cabin. However, Nature’s Inn is not in a city so the options for food or resupply were limited to what the hostel already had. That’s when Miss Janet came to the rescue. Miss Janet is a trail angel that shuttles people around and accepts donations. We called her up and she willingly agreed to pick us up and take us to Erwin, Tennessee. When we got to Erwin we were dropped off at a Mexican restaurant and told that we were going to be picked up in an hour and a half at the food lion down the street. My hunger kicked in, and I ordered a side of guacamole and a Carne Asada meal. Ate every last bite of it. I then went to the food lion and resupplied on 4 days worth of food to get to the Roan highlands. We went back to the hostel and quickly went to sleep while the rainstorm came back for a 2nd round. 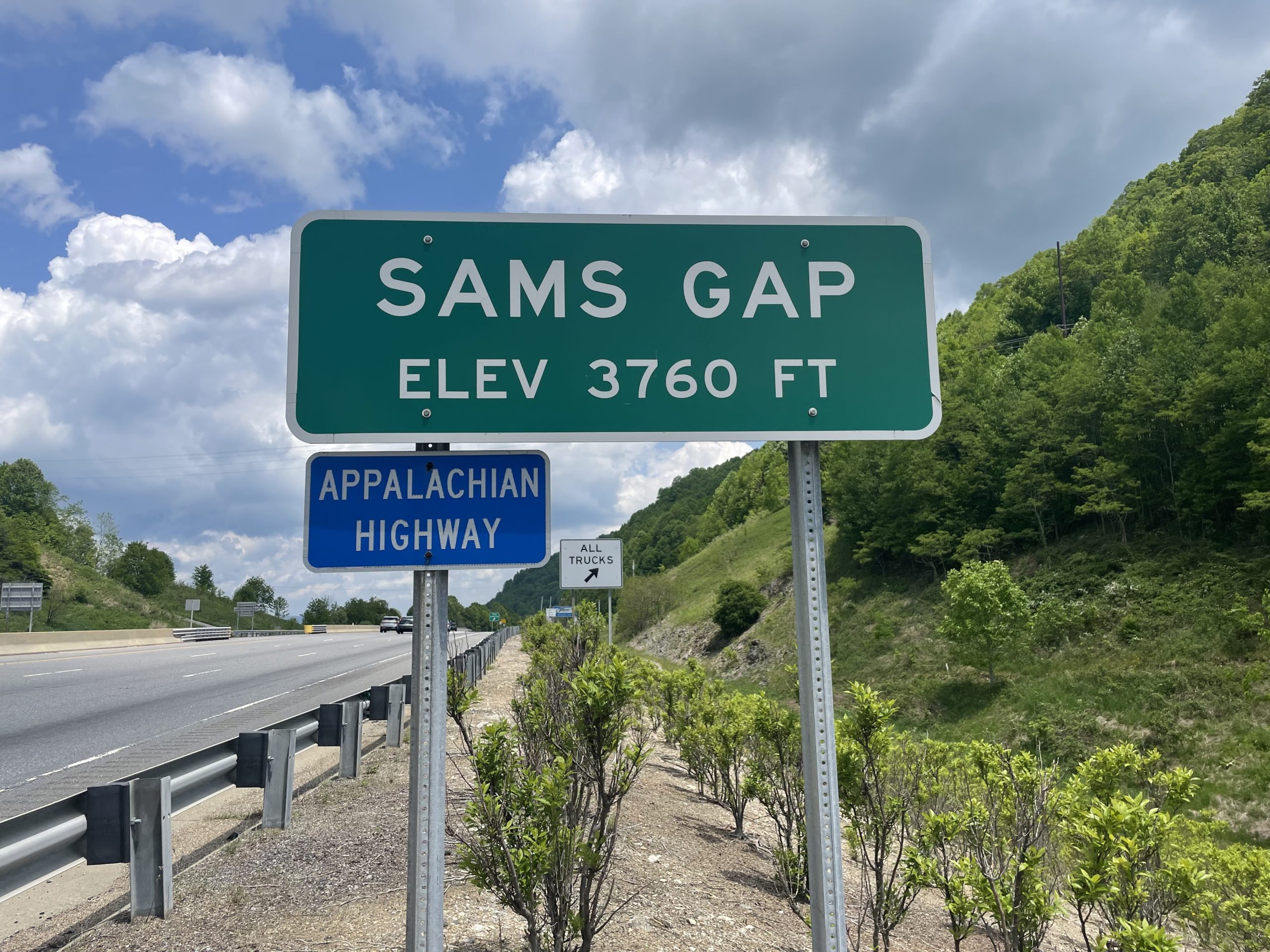 We were dropped off at Sam’s Gap at 8:00. However, I didn’t start right away. I had left my camp shoes at Jerry Cabin shelter two nights ago and a fellow hiker was coming to meet me at the gap to drop it off. My hiking partner started the trail and we agreed to meet at No Business Knob Shelter. I waited for two hours but still no sandals. It started to rain so I huddled underneath the bridge and waited.

The highway was surprisingly quiet when all of a sudden a beat up Nissan low rider pulled over on the side of the road no further than 15 yards away from me. The driver, who was sporting a confederate flag shirt and hat, stepped out of the car and said to me that his car was getting to hot. He then sat about 15 yards away from me and went on his phone. I didn’t leave my spot. I just stood there spitting sunflower seeds. After a few minutes he turned to me and asked what I was doing here. I told him I was a thru hiker waiting for a fellow hiker. He said he’d pray for me to finish and then added that he had lived in the town of Erwin his whole life. He sat there and I stood there as other hikers passed us, none having my shoes. I suppose it was an unusual sight to see underneath a bridge, but I felt comfortable and the man seemed to be very genuine and supportive of my hike. After some time he decided it was time to leave, and we said our goodbyes. But I noticed he had forgotten his pack of cigarettes on the ground so I called out to him before he left about this. He climbed back out and retrieved his pack. He thanked me for saving his cigarettes and then offered me one. I don’t smoke, but I have to admit that I did pause and think about the idea of sharing a smoke with this man underneath a bridge. Oh the story I could tell. I politely declined, but he was insistent and said he owed me. I again refused politely, and he accepted this. He thanked me again, and we said our goodbyes again as he drove off.

I eventually gave up on the sandals because it was running out of time to get to the shelter. I’d figure out another way to get the sandals or something close to it. The rain poured all day and when I got to Big Bald, I could see nothing. The wind was bad and the rain never stopped. After hours of hiking I eventually made it to the shelter where I met my partner who was waiting for me. It was just us in the shelter so we spread out all of our belongings to dry. Today was another short mile day due to the weather. 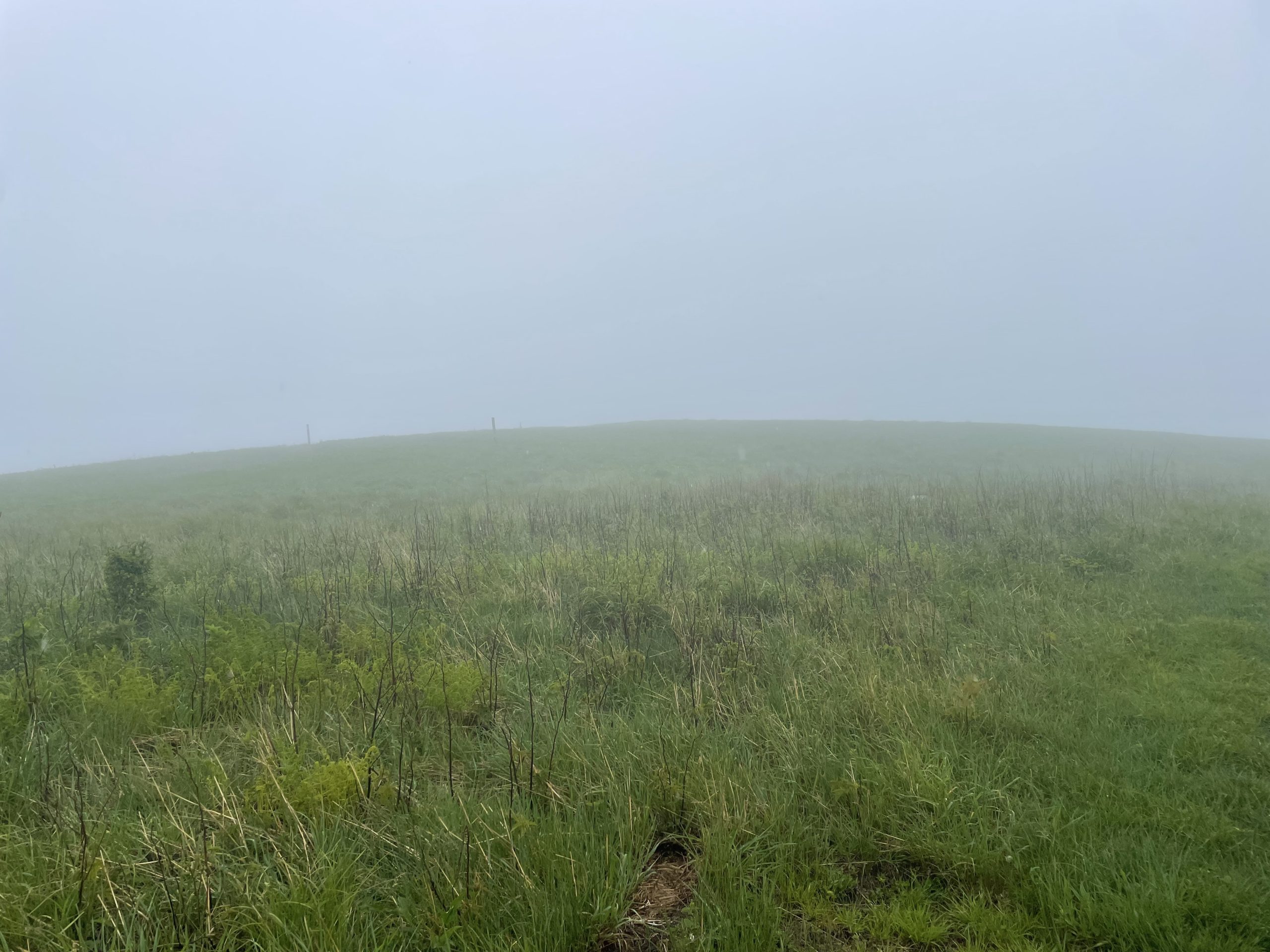 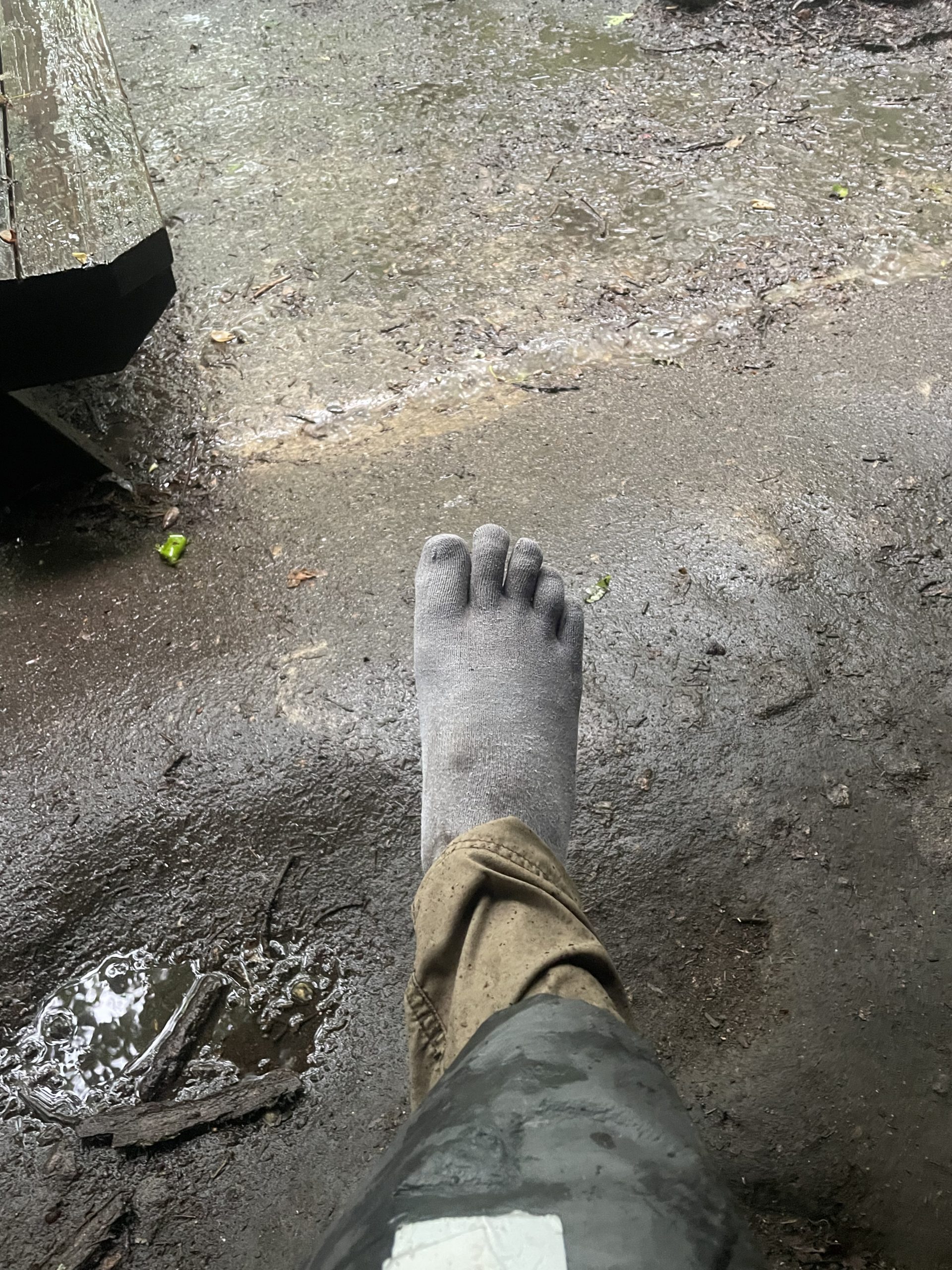 Soaked toe socks make it look like I have cement feet