I woke up before Bri and Piñata and jumped in the shower. I still felt clean from yesterday but standing in the hot water felt great. I made my way to the kitchen where all the boys were still sleeping and started making pancakes. People started waking up and we made breakfast together. I got the alternative trail name “Den Mother” because I washed the dishes and kept us on task. 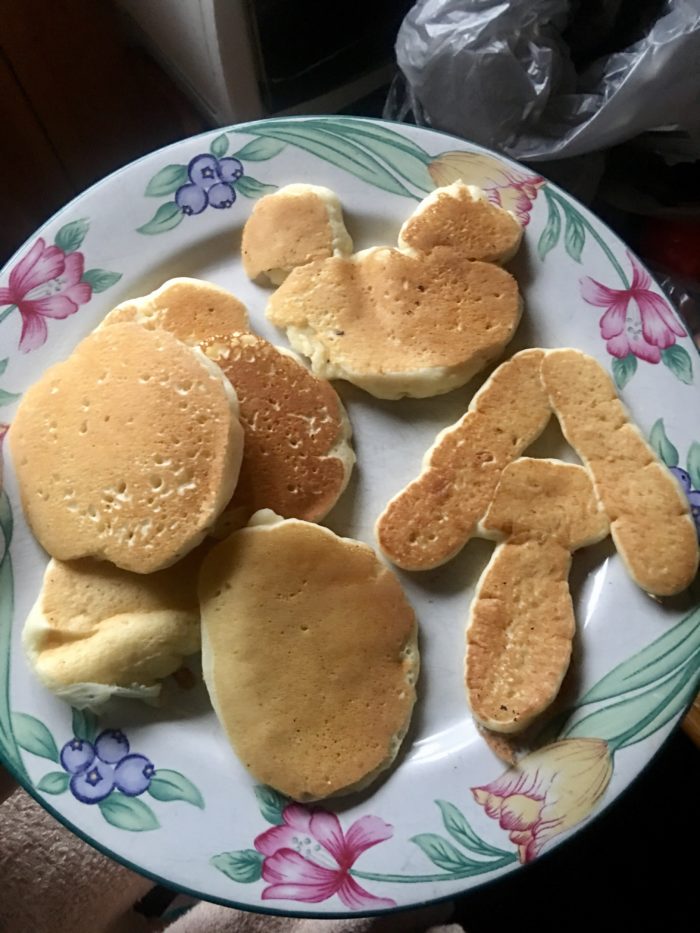 Bri and I packed up some dry pancake mix to take on the trail along with a split jar of Nutella and marshmallow fluff. I’m going to put my tiny nonstick egg pan to good use. Someone gave Bri 5 huge eggs in a grocery bag. We didn’t know what they were from. They were too big to be a chicken, and we spend some time deciding between duck and goose. She gave some to the boys and kept one to pack out herself. 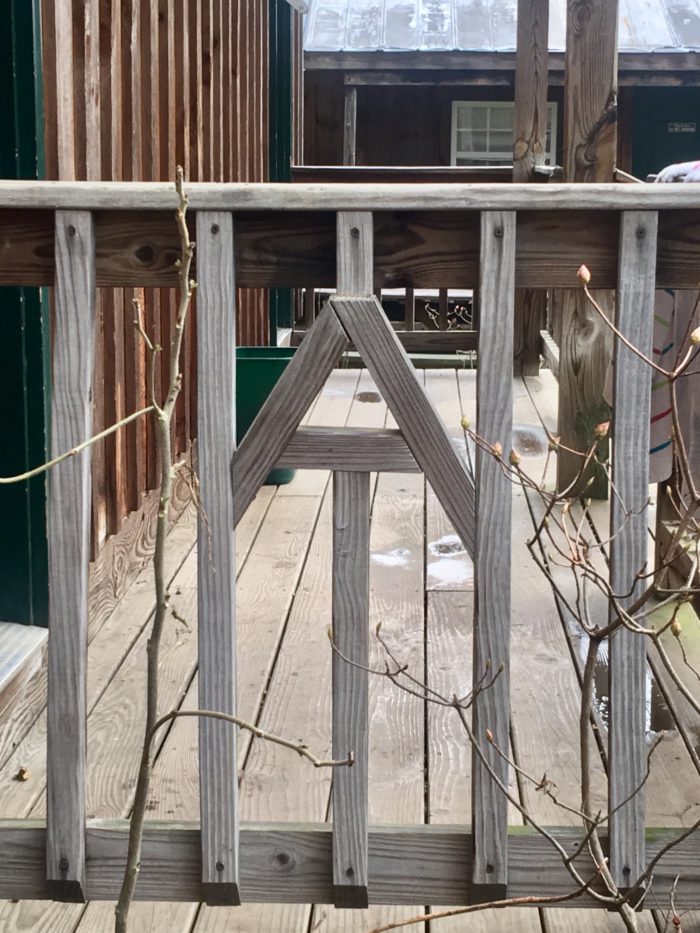 We checked out but waited on the porch at the hostel socializing with the other hikers when Caboose, Engine, and Earlybird showed up! It was really great to see them, and turns out they missed our little crew too. They’re hiking out tomorrow so I’m sure we’ll see them on the trail. Captain and Sitting Bull were planning on hiking out later. Rash, Pinata, Bri, and I left at noon to do the hilly 4 miles to the first shelter.

The hills were awful and steep to the first shelter, but thankfully went by quickly. We got to the shelter around 2 and met Scooby, Jeeves, and Kevin. They moved onto the campsite 8 miles away. It’s supposed to rain tonight so we decided to stay put. Not long after we arrived, Captain and Sitting Bull arrived, and then Blackfoot. Blackfoot set up his hammock across the upstairs bunk. We all played 20 questions, laughed until we cried, and had a great time. Captain and Sitting Bull are planning a big day of 20 miles tomorrow to the next hostel, and I’m not sure where the rest of our crew will end up.

We woke up to rain early in the morning. It slowed down but the wet trees still dropped loud drops on the shelter roof until it was time to get up. I was thankful we didn’t push on to a campsite because we would’ve gotten soaked. Bri made her goose egg for breakfast and added some cheese to the mix. I had a bite and it was delicious. 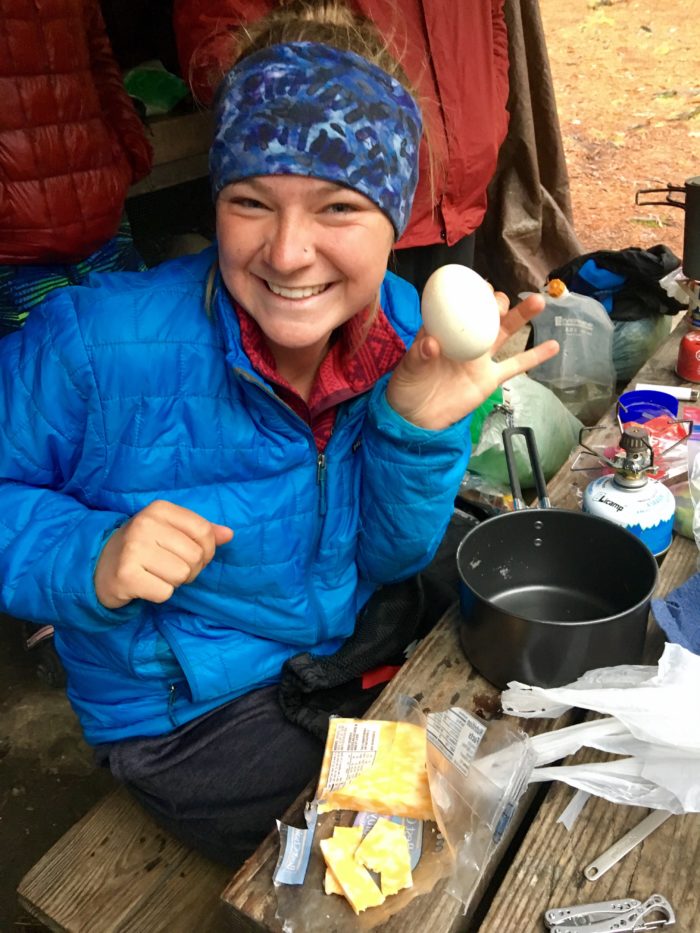 Bri with her goose egg

We packed up and headed out up the steep climb out of camp. We were doing around 13 miles today and the elevation looked like a long, slow, climb was in store for us.

The weather was cloudy, drizzly, and a little cold most of the day. Surprisingly despite the weather, we saw a lot of day hikers. I tried to keep my shoes dry and was successful most of the day, except towards the end I slipped and my left foot sloshed in a muddy stream. I felt the water seep in my shoe and cringed. 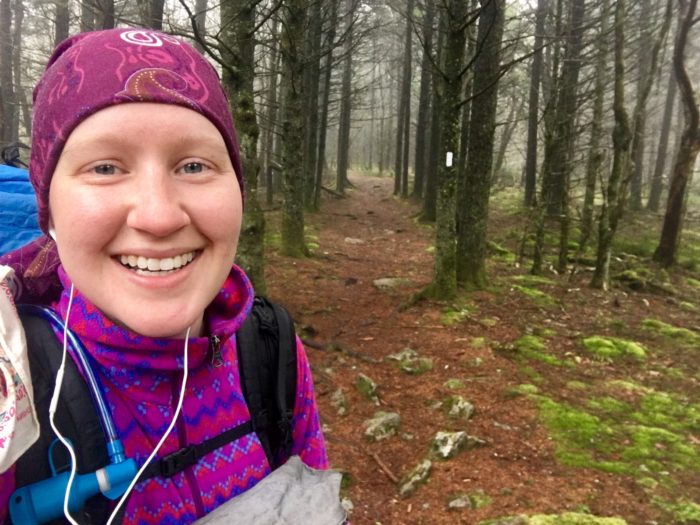 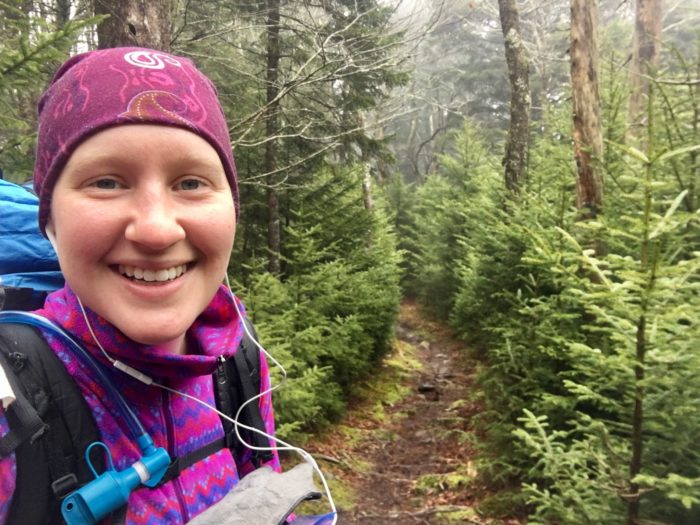 I arrived at the shelter before 3 and met Rash and Piñata. The sun finally came out and we sat in it, soaking up the warmth. I made a lot of my food. I was starving and I was tired of carrying around so much weight. I mixed pancake mix and made blueberry pancakes fried in butter in my little nonstick egg skillet. I put Nutella and marshmallow fluff on them and shared them with Rash and Piñata, then Hummingbird when he rolled into camp. They were a big hit. 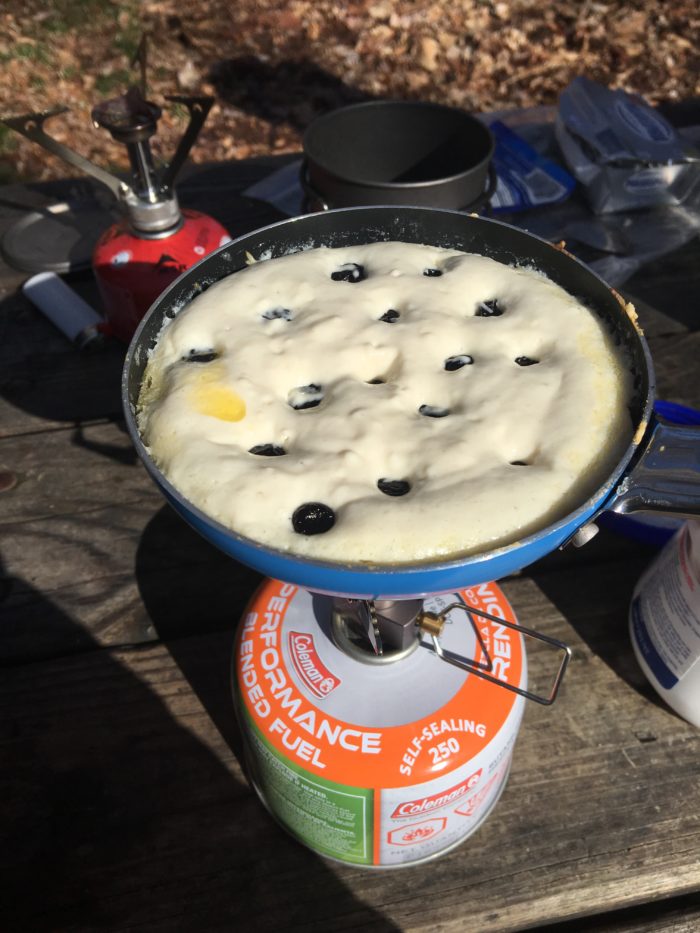 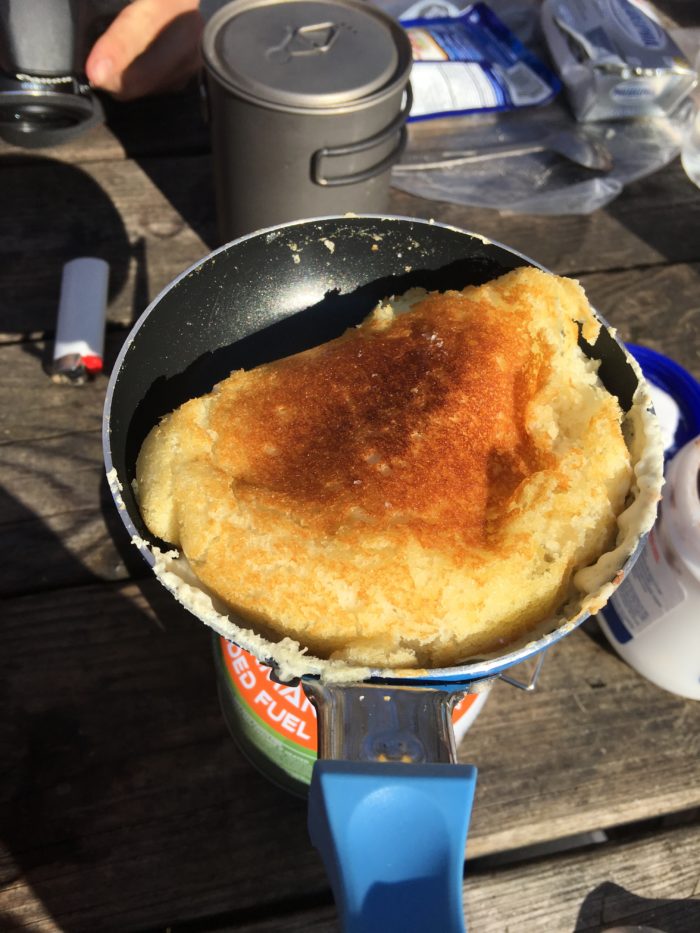 Since I still have overflow food, I have to hang a bear line. Rash and Piñata found a good spot, but I couldn’t get the rock over the branch, so Rash helped me out. This was all very complicated and I was grateful for my Ursack. Next time I just need to have self control to take less food.

The campsite was full of people but Rash, Piñata, and I were the only 3 in the shelter. Hummingbird chatted with the 3 of us. Almost near dark, Ramsey (formerly Crow from my first week on the trail) rolled into camp and pitched his tent right beside the shelter. I put earplugs in so I couldn’t hear the mice scurrying around and we went to sleep. 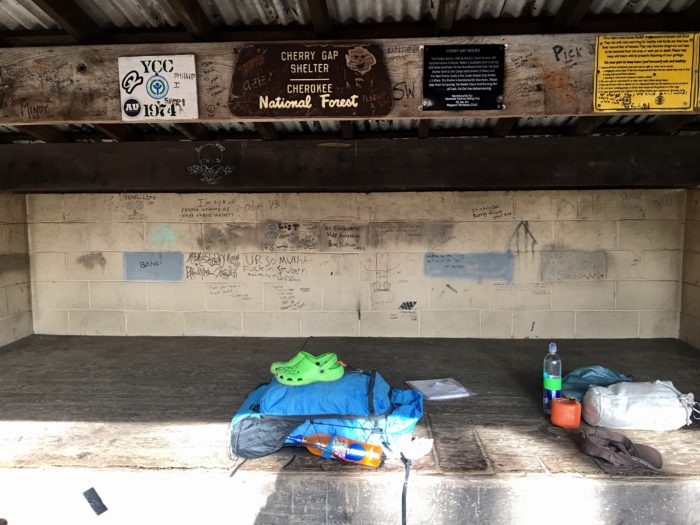 One of the more graffitied shelters I’ve seen

This morning I woke up at 5:30 from Ramsey’s alarm. It was such an odd electronic noise to hear in the woods. I couldn’t go back to sleep and apparently neither could Rash, so we both went to the bathroom. I lay awake for a while before dozing off again. I woke up later to Rash and Pinata packing up. I wondered if it was still early, peeked my head out of my sleeping bag, and was hit in the face by direct sunlight. It was after 8, which is like sleeping in until noon in the real world. I wished Pinata a happy birthday but stayed in my sleeping bag. I deflated my sleeping pad which usually gets me moving but this morning I was feeling like molasses. I laid on the hard cold shelter floor it for another few minutes, not wanting to get up.

I finally got up, fetched my bear bag, and decided to make oatmeal to lighten my food load. I’m not a big morning cooker, but I still had 4 packs of apple cinnamon oatmeal I was carrying around. I boiled water for 2 packs and mixed in a touch of cream cheese. It was delicious and tasted like an apple danish. Washing my pot which was surprisingly easy. Maybe I’ll convert to a morning cooker after all.

Hummingbird chatted with us while we ate and then he literally ran off down the trail. Rash and Pinata left as I was slowly packing up. I was left with some day hikers as I got all packed up and started down the trail at a very late 9:30 start.

The terrain was small ups and downs all day with a big climb at the end to the campsite. It was 15.5 miles and I took them slowly. I was feeling good, courtesy in part to my morning oatmeal, and I was enjoying the beautiful sunny day. I stopped when I felt like stopping and just strolled along. I started layered up since it was a little chilly despite it calling for a hot day. I used to shed all my layers at the shelter right before I started hiking, but it took forever to warm up, and it was pure misery waiting to get warm. Now I’ve taken the motto “hike your own hike” seriously and I start my hike comfortable, then stop and shed layers as I need to. This morning about an hour in, I stopped on a big rock and took some layers off, then put on sunscreen.

I met a bunch of day hikers today enjoying the beautiful weather, and every single group commented on my white blaze hat I got in Hot Springs. Every day on the trail I feel more and more like a thru hiker, and today it felt even more apparent than usual. I wonder if they can tell us apart from the 1-2 day section hikers that come through. Day and small section hikers are certainly easy to spot for us.

I was listening to my music as I hiked along, but I had a feeling instead of my usual two earbuds in, I should just have one in today. A large part of the trail today was in different terrain. It was in what looked like a large drainage ditch going up the mountain. A few times I checked Guthook’s to make sure I was on the right path. I was crunching along in a somewhat deep bed of dead leaves on the trail when I heard leave crunching that didn’t come from my trekking pole on the side of the trail. I inspected the area and came across my 3rd snake of the trail! What a huge treat. He was a small garter snake, less than 6″, and he was not pleased by my presence. I snapped some photos zoomed in on his little pink flickering tongue and left him be. 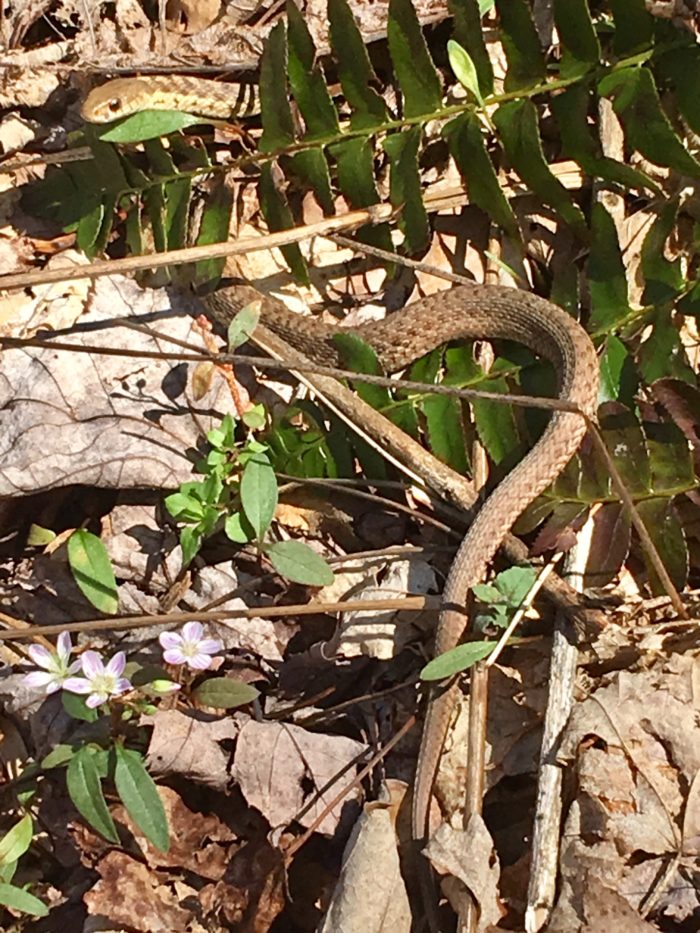 A little before noon I hiked past a couple packing up their tent on the side of the trail, and I was instantly jealous of how long they got to sleep in today. I feel like I might be doing the trail wrong. Maybe once I get back on schedule I’ll allow myself that luxury. I told them about the awesome snake I saw, and got their names: Credence and Clearwater. A little while later I saw Sunshine chilling in her hammock by the side of the trail, soaking in the sun and taking a little nap. Sleeping in late, taking naps?! I obviously have a lot to learn.

I came to the shelter 9 miles from where I started and it was already 2:30. I still had 6.5 miles to cover. I tried to not think about it and hung out with Earlybird who was laying out on a tarp in the sun. Credence and Clearwater arrived right before I left and they said they might make it to the campsite tonight. Earlybird said Engine, Caboose, and the rest of the gang were coming to the shelter tonight and trying to make it to Overmountain shelter (a large converted barn) tomorrow. That’s where we’re planning on being tomorrow so now I have something more to look forward to.

I tried picking up my pace the last few miles. I was dreading the last 3 miles which were straight uphill (the campsite is halfway up Roan Mountain), but it was mostly switchbacks and the habitat change was beautiful. It went to rocks and fir trees, and the view was gorgeous. It’s calling for rain tomorrow so I doubt we’ll get views on top of Roan Mountain. 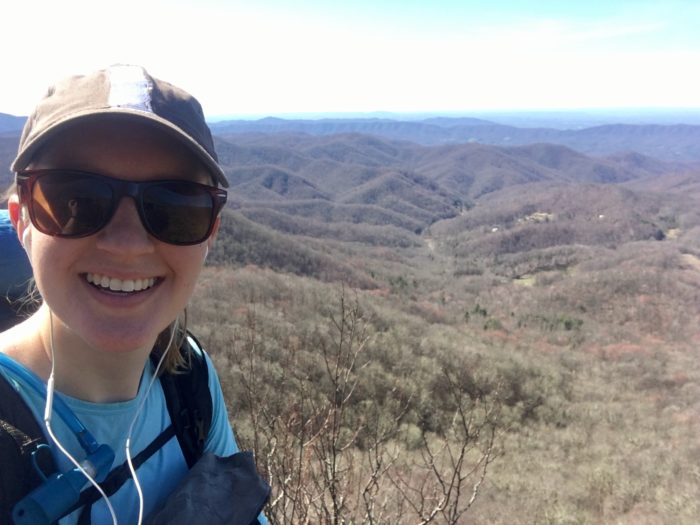 When I arrived at the campsite, Rash and Piñata were hanging out, and Kentucky Straight was setting up. Kentucky Straight told me he saw a bear on Unaka Mountain 2 days ago! I had a feeling walking through those fir forests it was a good spot to see a bear. He said the forests we’ll hike in tomorrow on Roan Mountain will be similar to the ones on Unaka (lots of firs and rocky) so keep our eyes peeled. We had dinner, and I fetched water down a terribly steep and long water trail. My overflow food is finally condensed into just my Ursack, so thankfully I don’t have to hang a bear line. Rash wasn’t feeling great so everyone turned in early. We’re going to try for an early start tomorrow to beat some of the rain.