I’ve been walking and hiking a minimum of 5 miles a day since the fall. Ian and I did a 50 mile trip in MD in December. So, even though I’ve been a little less enthusiastic in February due to all the snow (I was thinking maybe shoveling my driveway was enough) I felt I was ready when I signed up to climb Mt Washington and sleep overnight in the observatory (MWOBS).

The snow and ice made it worse, but I was definitely not ready for the elevation. My legs were sore for 4 days afterward. Still, it was a fantastic trip. Two sons, Ian and Mark, joined me on this guided excursion.

We booked our trip through Mooney Mountain Guides. I can’t say enough nice things about Mooney. I’ve worked with them on a number of rock climbing and ice climbing excursions with my Scout Troop.  In addition, Ian, Mark and I took an “Introduction to Mountaineering” course with them last January. We thought that summiting Washington in the winter would be a challenging next step.

We got up way too early on a Friday morning in March, so that we could drive to Pinkham Notch, New Hampshire from Massachusetts and be there by 7:30 AM. After checking out equipment and our clothing (layers), we set out around 9:30 up the Tuckerman’s Ravine Trail. The pace was slow and leisurely, as we were not allowed into the observatory on the summit until around 4 PM. No sense is racing to the summit and then freezing outside for hours. This was very lucky for me as the slow pace was exactly what I needed.

Having been to Tuckerman’s Ravine and the summit of Washington many times in the warm weather, I was expecting things to be very familiar. Not so. The trail was completely different.  The beginning was actually easier. In summer, the trail is pretty rocky and takes attention in placing your feet. In the winter, all those rocks are buried under snow and a Snow Cat that goes up and down from Hermit Lake actually smooths the snowy trail out. Its like walking on an interstate highway – albeit uphill – always uphill…. 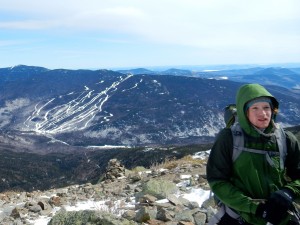 Hiking up Mt Washington (Wildcat in the background)

This is all done wearing mountaineering boots and crampons. It takes a bit to get used to these. They have a warm inner lining inside a rigid outer plastic boot. There is no “give” in the sole so your foot does not bend at all. This is great in climbing up an ice wall because you can anchor the front teeth of your crampons in the ice and then stand easily on the boot as if you are standing on a board. However…. it makes hiking a little more challenging. Basically you have to walk like a duck, putting your feet flat on the ground. That uses slightly different muscles than the ones you usually use in hiking.

Once we left the Tuckerman’s Ravine trail behind to ascend over Lion’s Head, we attached the crampons to the bottom of the mountaineering boots. Now we were walking in deeper snow and having to climb up steep icey inclines. In a couple of places we used ropes for safety.

The weather was beautiful and got better as the day wore on. It started out pretty cold with the temperature in the single digits, but warmed up to the high teens as the day progressed. There was little wind below the tree line and  the wind speeds at the summit dropped to a sedate 30 miles per hour or so by the time we got up there.  This was rare weather indeed for the summit of Washington. 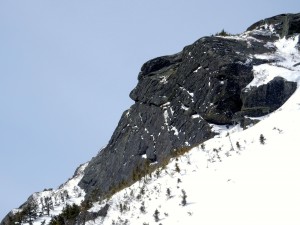 Now, I made a bad mistake that morning. I didn’t eat breakfast. I was too excited and was concerned about the drive and arriving on time. In addition I only brought a little snack food for the trail, thinking that they would be feeding us once we got to the observatory. Consequently, I started seriously running out of gas once we passed Lion’s Head. It was still a mile or so to the summit and I started flagging in the energy department. I definitely had to channel my “inner Dory” (from Finding Nemo – “just keep swimming, just keep swimming…”). So – slower than anyone else, but still before the time they would let us into the observatory building – I made it to the summit. 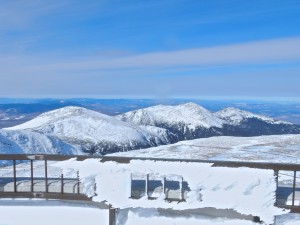 The observatory was wonderfully interesting. It is a totally private, non-profit operation. It’s not connected with the government although they do contract to provide the government with their weather data. The crews stay on the summit for a week at a time and collect weather measurements 24 hours a day. Part of their funds are raised by hosting tourists like us. They fed us dinner and breakfast, and gave us a tour of the observatory. We went outside to see the sunset, but the clouds had moved in so we didn’t see much of anything.  The staff then showed us their equipment and described the challenges they face in dealing with some of the worst weather on the planet. For example, they do not use an anemometer to measure wind speed, as these get too beat up by the wind and the ice. They use a pitot tube like those used on airplanes to measure air speed. While we had relatively calm conditions while we were there, they had a day with 140-plus mile an hour winds only a week or so before we arrived. 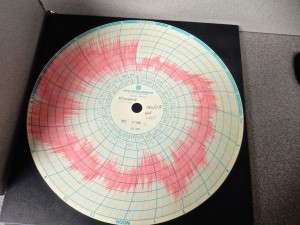 One of the observatory crew, Nick, was an intern from the University of Washington. Nick was working in the observatory until May. Once he finishes his internship, he’ll be spending the summer working on the Croo at Madison Hut. It also turns out he is friends with Ian  (the caretaker – and 2014 AT thru-hiker – Linda and I met at Zeeland Falls Hut back in November). Ian is working this summer at the Lakes of the Clouds hut. So I have some visiting to do once I make it to the Whites this summer…. 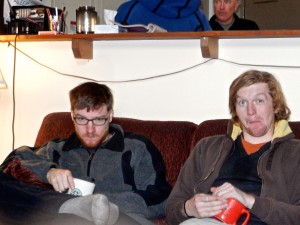 After dinner we sat around and chatted about the mountains.  We spent some time talking about the woman who recently died near Mt Adams and Mt Madison.  One of our guides was part of the recovery crew.  It was a somber discussion, but very interesting to hear their comments and insights.  They were much more understanding toward the hiker compared to many of the comments made in the newspapers.  While the result clearly points to the fact that she made some bad decisions, their take was that they had made potentially questionable decisions at different times in their lives and were lucky to not have bad consequences.  They also recognized it’s easier to judge a decision in hindsight.  These were clearly people who respected the mountains and understood risk, but were still willing to take it to experience the rewards the mountains have to offer.  They were also willing to take risks to help rescue or recover a fellow hiker.  I guess if you never leave the safety of you house, hiking in the mountains in winter will always seem foolish.  But if you are like minded in the desire to experience the outdoors, you can be more understanding.

After breakfast, we made the trip down, retracing our steps to Lion’s Head and down to the Tuckerman’s Ravine trail. I had tons of energy on the way down, but think this is where most of my leg soreness came from. Going down hill and being “flat footed” in the mountaineering boots took its toll on my calves and my quads.

Hopefully none of this experience is immediately applicable to our thru-hike. At least the boots, crampons, ice axe, face mask, goggles, etc. Hopefully we won’t deal with snow that deep, winds that high, or temperatures that low. Still, there are a couple of things I definitely will make sure I do differently over the next few weeks and once I get on the trail.

1. I need to eat breakfast!  That and have some high energy snack foods with me (my pack is gonna get heavier). Being hungry really saps your motivation.

2. In need to practice hiking up and down some serious mountains before we leave for Katahdin. If one mountain can tire me out, I’m never going to make it out of Maine. I have a little less than 60 days. I’ll be making some day trips to some of our closer mountains to get used to hiking up and down. I think January and February, with all the snow, let me get a little lazy…

The next time I see Mt. Washington, it will be a lot warmer (I hope!).