Embracing the Suck: My Little Moan About the AT

Don’t let this post mislead you. I am still having a wonderful time on the AT. I love this trail and the experiences it is giving me. But sometimes thru-hiking really does suck.

One day someone asked what my favorite and least favorite things about America were so far. My answer was the same for both: The people.

But in reality my only negative comment about the people I’ve met is that they’re too happy. Obviously, it’s not all sunshine and rainbows all the time but generally the Americans I’ve met will always have a positive outlook on things. This is great but I’m British and there’s nothing British people like better then a good old-fashioned moan. So here it is, here is my moan about the AT.

This has been one of my biggest challenges on trail. Anyone who knows me knows I need a lot of sleep. I’ve never been one for lie-ins but a solid nine hours a night is generally what I require to function well. So far I have not managed to sleep a whole night without waking up at least once on trail. It’s getting better as time goes on but I always struggle to sleep in new locations, which is not ideal as each night on trail is a new location. Being in my tent is now very familiar and tends to be where I sleep best but I’ll still wake up a couple of times a night. Shelters are tempting as they save the effort of putting up a tent but they end up being noisy and cramped. The thought of a nice bed in town is always very tempting but so far I’ve found hostels and hotels just as difficult to sleep in as I’ll be sharing a bed or at least a room with several people. Whatever the reason, I’ve found sleeping on trail to be difficult, making the tough days even tougher. 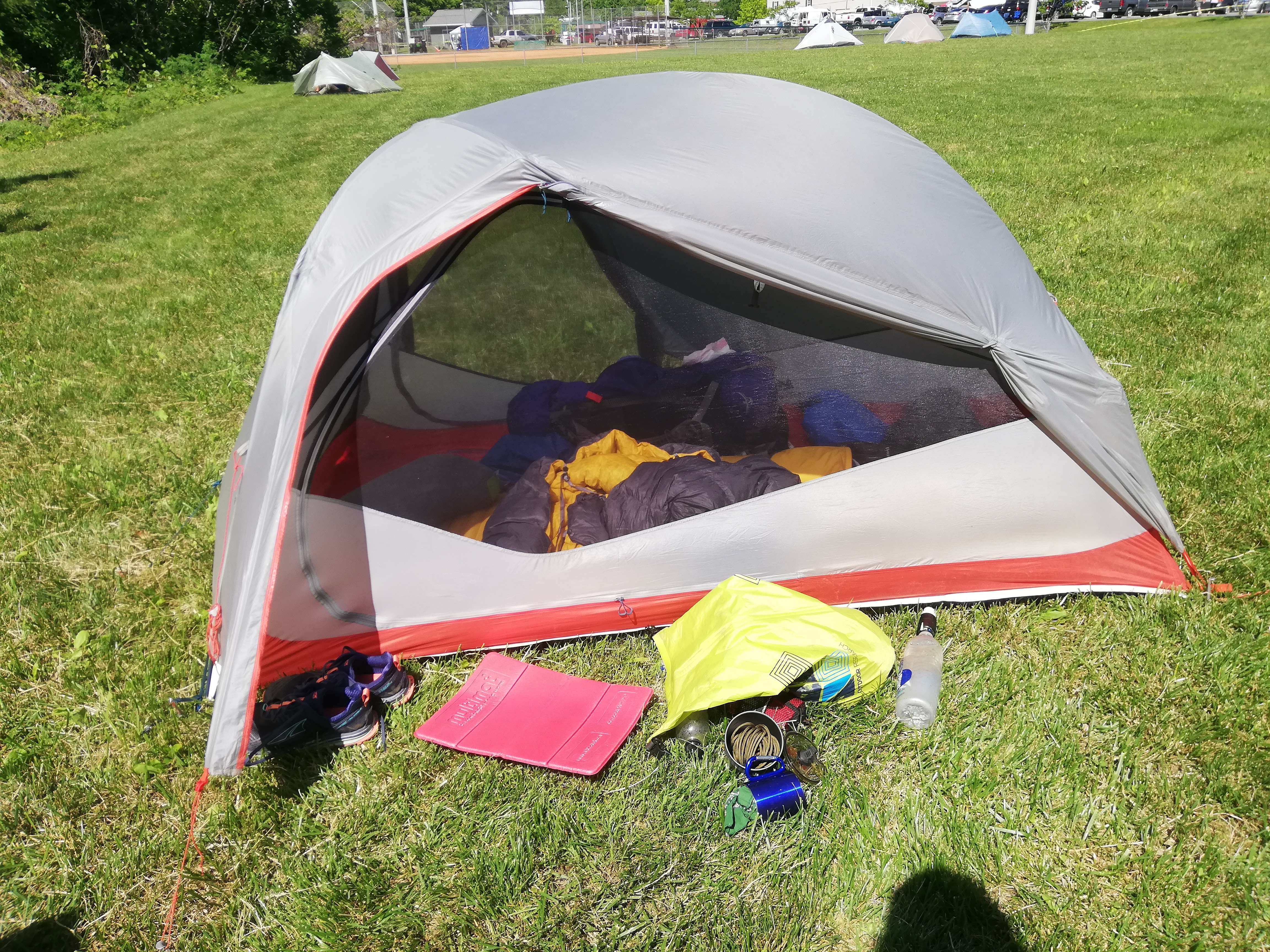 Setting Up/Taking Down Camp in the Rain

Being inside a tent in the rain is fine. Walking in the rain is doable. What’s difficult is transitioning between the two. Arriving at a campsite dripping wet and trying to keep everything dry whilst setting up a tent is hard. I have a double-walled tent so it’s especially difficult to keep the inside dry as this has to be set up before throwing the rain fly over. Even worse is in the morning when you have to do all that in reverse with the knowledge that you’re going to have to carry a wet tent all day. I’d estimate that it takes me about twice as long to pack up on a wet morning. And most of that is just me sitting in my tent summoning up the motivation to go outside! 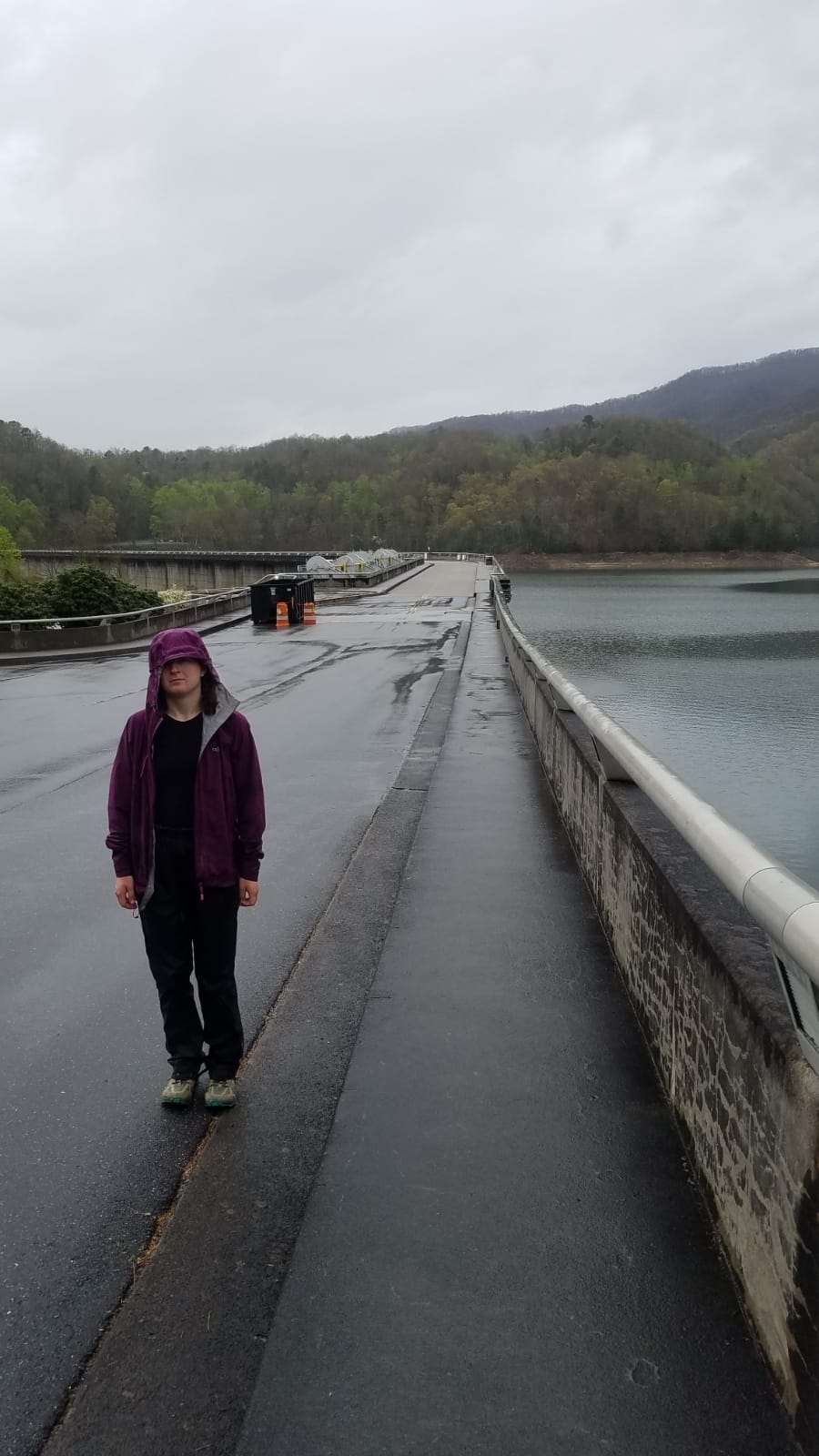 Me, very happy to be heading over Fontana Dam in the rain.

This is a weird one. Everyone who I’ve met on the AT has been friendly. Ninety-five percent of people have been really friendly. When you put a lot of really friendly, slightly crazy people together under testing conditions, friendships form fast. The issue is that just because you get on well with someone doesn’t mean you’re going to be able to hike with them. Everyone is out here to hike. Everyone hikes at different paces. Some people want to do 20 miles in a day, some people are only able to do ten. This means that over time, groups break up. For the first few weeks I was in a pretty solid group that camped together every night. Then the day we hiked into Fontana everyone stopped at different places for various reasons. Suddenly our group of six had disintegrated and it was just me and Slouch heading into the Smokies as a pair. It took about three weeks before we found another group going at a similar pace to ourselves. This makes us now a group of five. I am very solidly in the middle of the group in terms of hiking pace. This week I have spent each night with a different combination of people in the group as we’ve all been going at different paces. Sometimes I’ll make it to where the super fast people are going, sometimes I can barely make it halfway. This all makes it difficult to maintain a solid group of friends. Although by now I have many other friends on the trail and always enjoy meeting new people, it can be hard when you have people that you connect with and have been through a lot with steadily fall ahead or behind you.

By now I think I could write a book on all the different ways that hanging a bear bag can go wrong. I amaze myself every day by finding some new way to mess it up. But on average I am getting better. The hardest part is finding a suitable tree. I have been tempted by an Ursack (a bearproof sack that you don’t have to hang in such a complicated way) since before I got on trail but having seen one of these be punctured by a fork I’m not sure I’m willing to pay the $90 or carry the extra weight. (Trust me, my pack is heavy enough already!) So for now I’m going to struggle on and hopefully become a master at throwing rocks over high branches by the time I get to Maine. 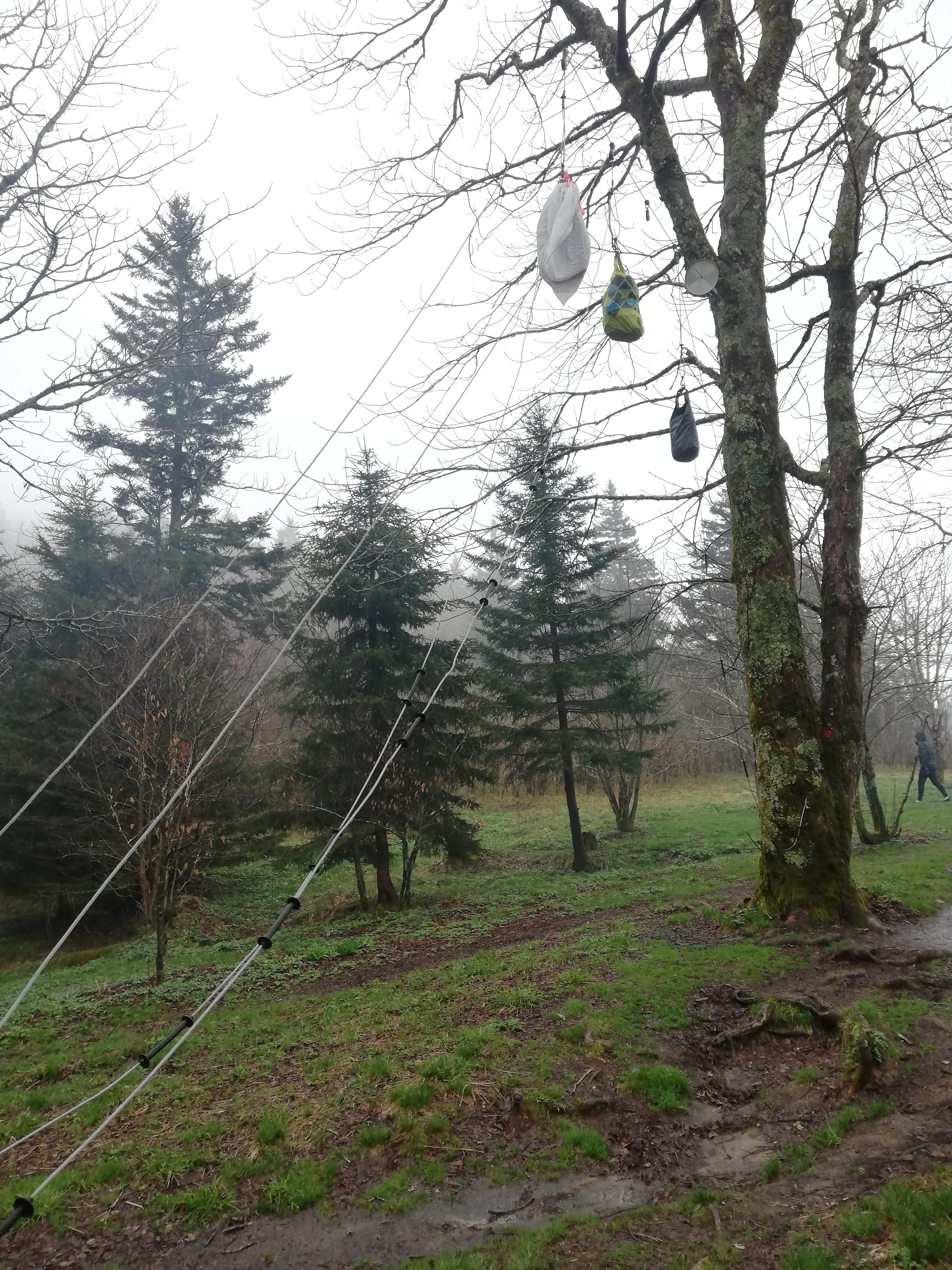 Bear cables, a rare but very welcome sight that make bear hanging so much easier!

Biting, stinging, buzzing, irritating, whatever they do bugs are never a welcome sight on trail. Last week I counted 37 bug bites on my legs. One night we were literally being rained on by inchworm poo and we’ve spent days walking through inc worms hanging from their webs. I pulled six of them off one sock. My new favorite bit of kit is insect repellent wipes. I’m yet to tell if they actually work better than bug spray but the act of wiping yourself with them is refreshing on a hot day!

So my whole body is itching with bug bites. Add to that itchy eyes, nose and throat from hay fever.  I constantly need tissues within arm’s reach and have to take eye drops multiple times a day. The irritation to my nose also makes me more prone to nosebleeds. One day I had four nosebleeds whilst hiking. This is irritating enough in normal life but having to carry the anti-allergy tablets, eye drops  and a substantial quantity of tissues (both clean and used, there are no bins out here!) is very unwelcome. I’m currently experimenting with a snot rag to cut down the volume of tissues required.

I thought rocks wouldn’t be something that I had to worry about until Pennsylvania, but apparently I thought wrong! The worst ones are the ones that just litter the trail and prevent you from being able to walk at a decent pace. They tire our your feet and provide endless opportunities to twist your ankle. Bigger rocks are generally OK, but if they’re at all wet they become lethally slippery. Rock scrambles can be fun but the weight of a full pack on your back makes them a dangerous game. The descent from Dragons Tooth was crazy and really cool but the whole time I had a nagging thought of “one wrong step and your hike is over.” 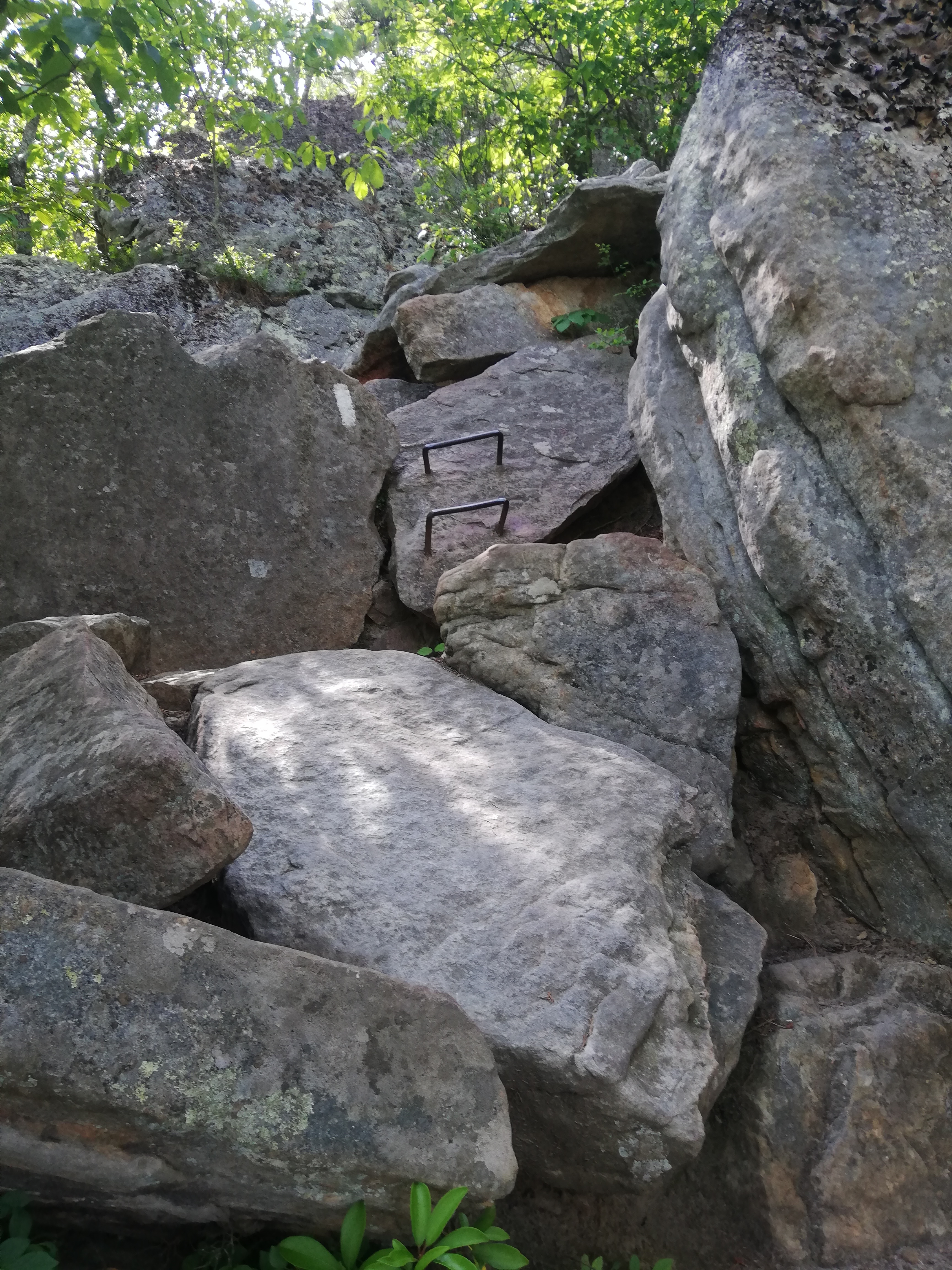 The descent from Dragons Tooth.

Now that I’ve got that out the way I should probably end this post on a more positive note.

Things that don’t suck as much as I thought:

Walking in the Rain

I’d still prefer it not to be raining but it can be nice once in a while. 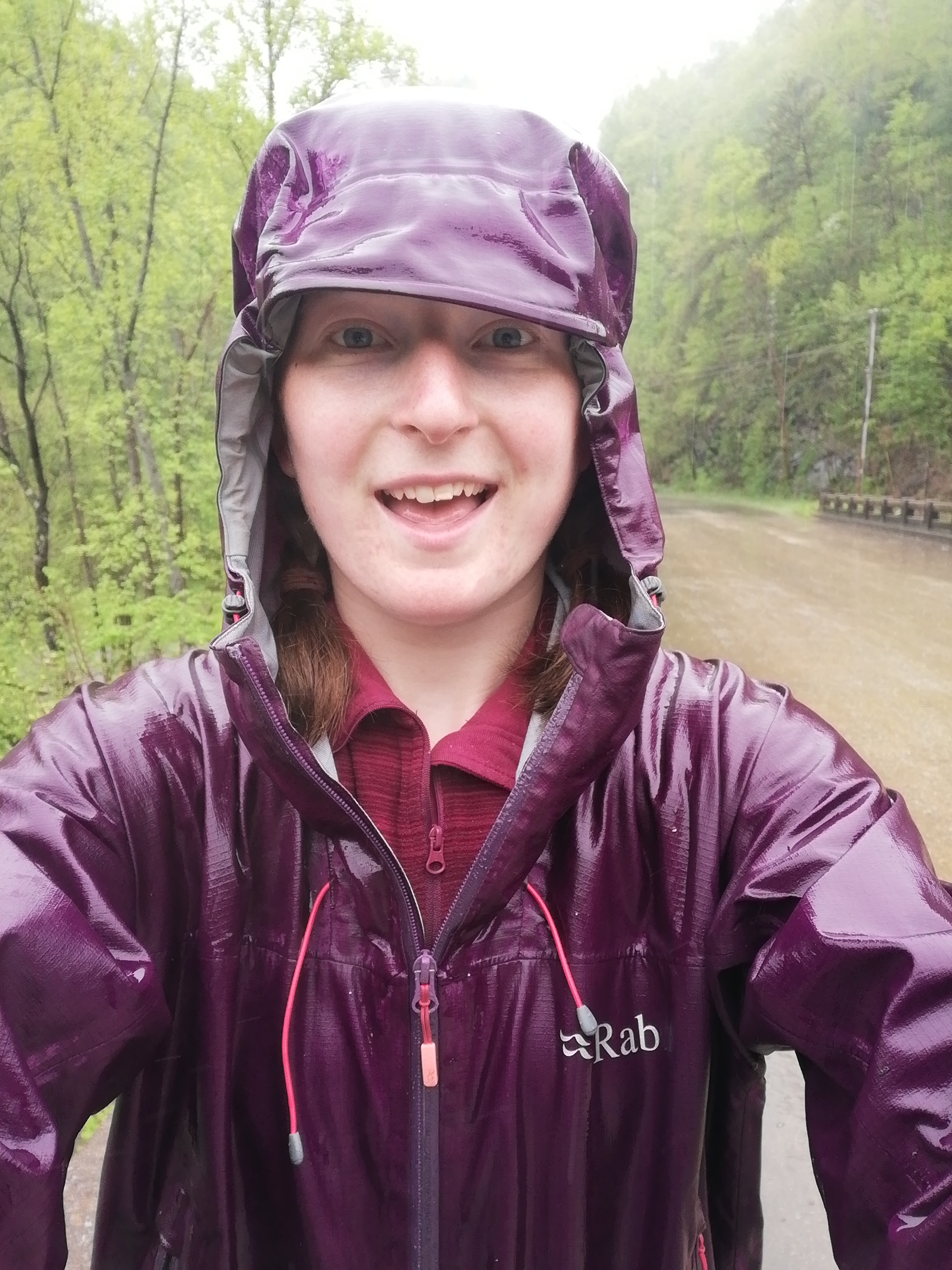 Happy to be walking in the rain. Not so happy when my phone broke from water damage.

I grew up with a huge fear of dogs and usually take awhile to get comfortable around a new dog. However, most of the dogs on trail have been well trained and therefore not intimidating and I’ve even made friends with a couple!

Sleeping on the Ground

Although I struggle to actually sleep I do find my sleep setup really comfortable. Having an inflatable sleeping pad and pillow makes it is easy to forget that I’m just a couple of centimeters off the ground.

By this I mean I don’t find the act of going to the bathroom in the woods as gross as you might expect. Privies are gross but much easier than digging catholes. so where possible we’ll try to camp near a shelter with a privy. This is much easier now than it was last month in Tennessee, where there are no privies! 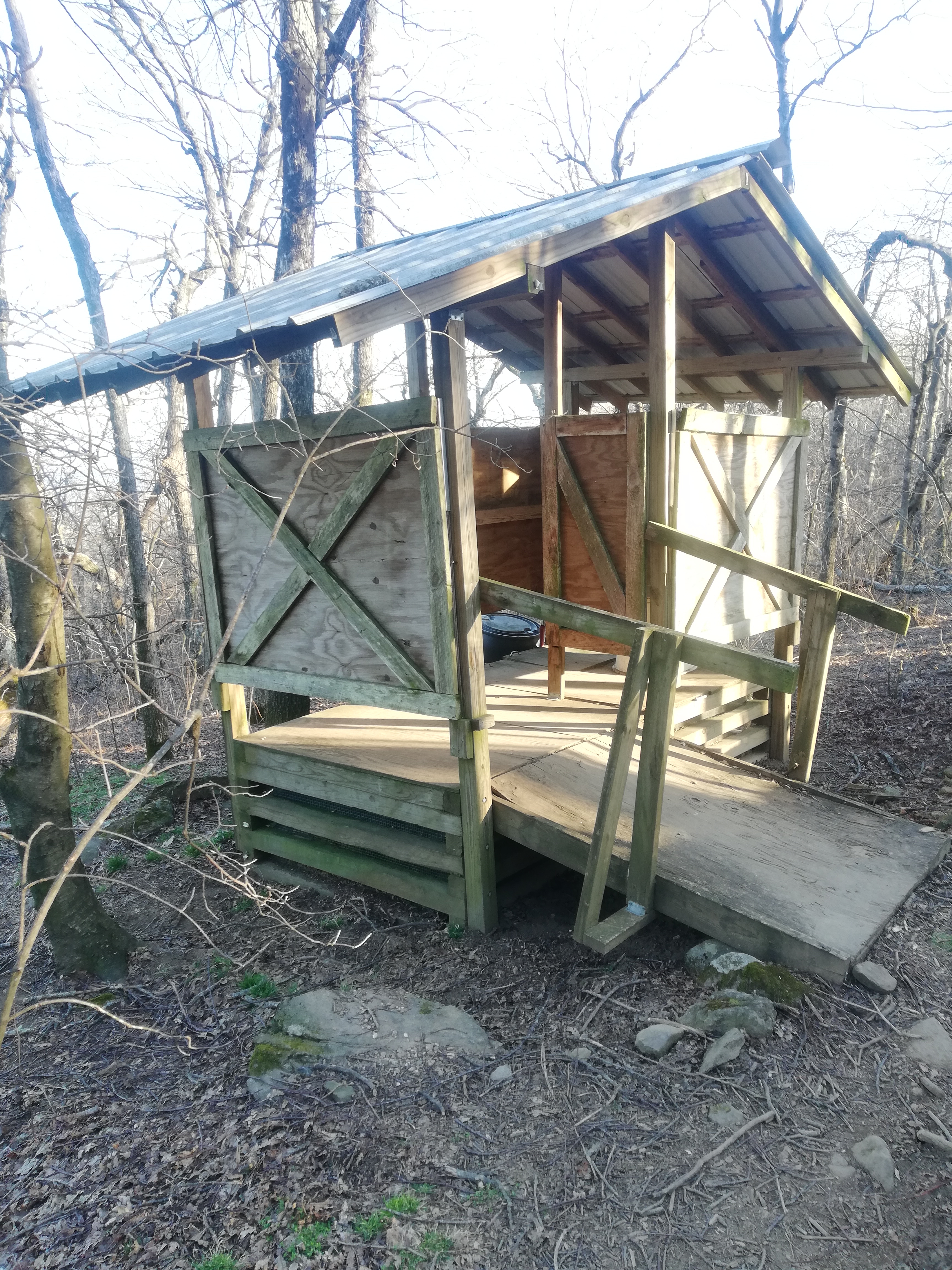 As privies go, this one wasn’t bad!

Carrying a pack is hard but it definitely isn’t as bad as I was expecting. I was expecting bruised hips and shoulders right from the start, but if anything I’ve found that as my pack has gotten lighter I’ve found it more uncomfortable! This week my pack was the lightest it’s ever been but somehow I ended up with a large lump on my hip from where my hip belt had rubbed.

Overall I’m still so glad to be on the trail but things seemed to have ramped up in difficulty in the past few weeks. However, I did come out here to challenge myself so it feels like I’m finally getting to the part I’ve been waiting for. And no matter how bad the day, things always feel better after a good moan!