We woke up this morning and lounged in bed, delaying getting up. I called my mom and ordered suitcases online, then we went downstairs for breakfast. I feasted on a bagel loaded with cream cheese, apple sauce, hot chocolate, and a poppy seed peach muffin. We went upstairs and packed up, checked out, and loaded in the van. Eric checked if 2.0 would be joining us, but he was still in his bunk.

Eric dropped us off at the trailhead, which was a paved road up a hill. We applied the well needed Deet and headed up the hill into the woods. The trail was beautifully flat and covered in soft pine needles. We did the first few miles in record time, so we stopped at the shelter for water and a snack right before the first big climb of the day. The caretaker came by and said hello, and we could hear people laughing and yelling at the nearby beach.

We started up Pleasant Pond mountain, and the heat was stifling. Rash and I went ahead, and Piñata got stung by a hornet or a wasp on her calf. I was glad to be done with that climb, and we came to the rocky top where we had a great view of the Bigelow mountains. We chatted with a day hiker and tried to see Katahdin with no luck.

The rest of the trail to Moxie Bald mountain was enjoyable. The climb to Moxie was long, but not as steep as our climb this morning. Towards the top, we came across a huge rock slab suspended over the trail and took a quick break. I had service and we checked the weather, which was bad news since it was supposed to rain all night and tomorrow.

At the top of Moxie Bald, there were blueberry bushes everywhere. The blueberries were tiny things but sweet and warmed by the sun, which was a weird contrast to the blueberries bought in the grocery store and kept in the fridge. I picked 5 or 6 handfuls of the sweet treats, and didn’t even make a dent in the stock of ripened fruit. 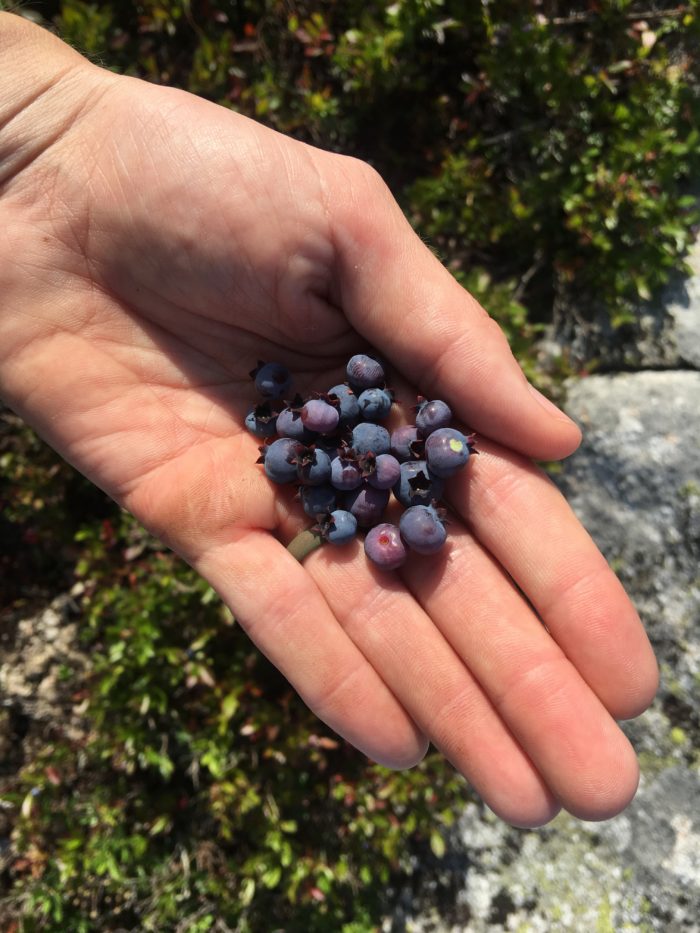 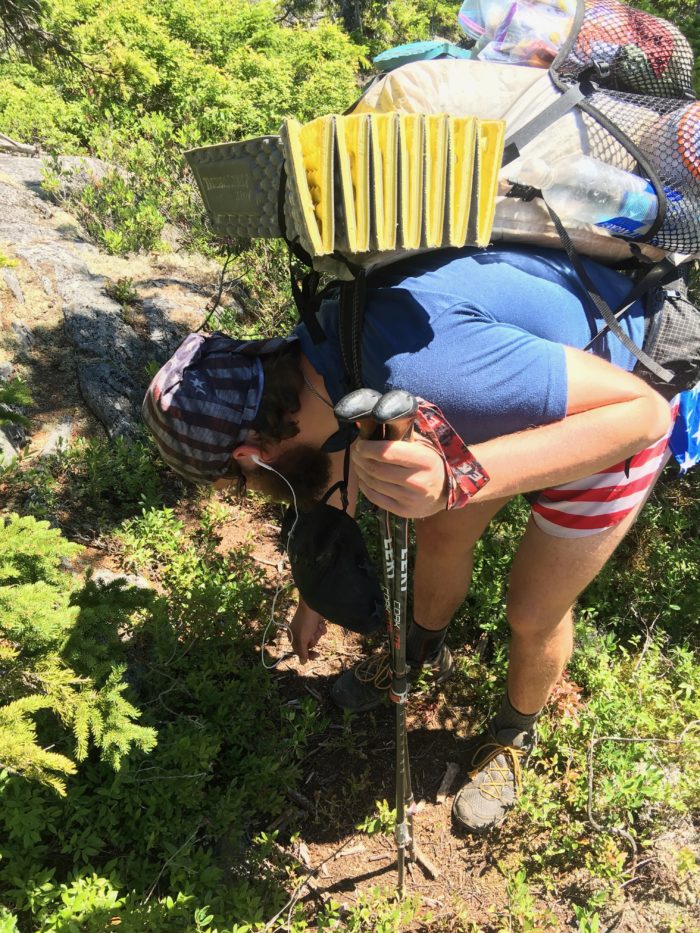 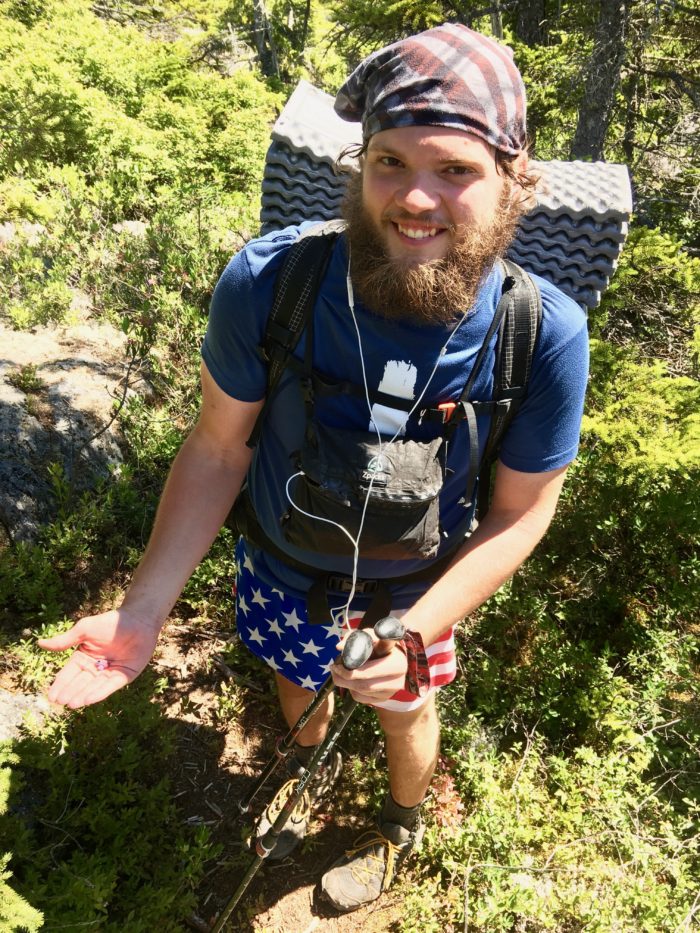 The trail down the mountain was easy, and we were at the shelter in no time. We set up our hammocks by the pond with the older lady from the Sterling Inn (a section hiker), Flip (a flipflopper), and another hiker whose name I can’t remember but sounded like Mario Batali. We ate dinner on the big rock slab by the pond and watched Flip go fishing. He caught a medium sized fish but threw it back. It was peaceful sitting by the pond listening to the loons, but I started getting attacked by hoards of mosquitoes, so I hurried to the safety of my hammock and bugnet. After changing into my sleep clothes, the mosquitoes don’t seem to mind that I have Deet on underneath my long shirt and pants, and bite me through them. 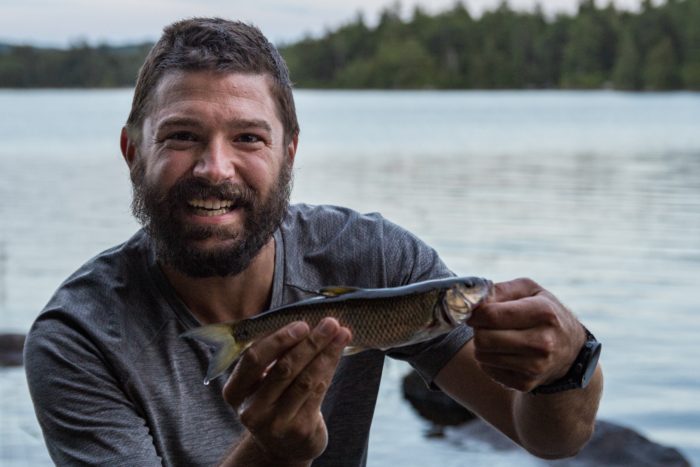 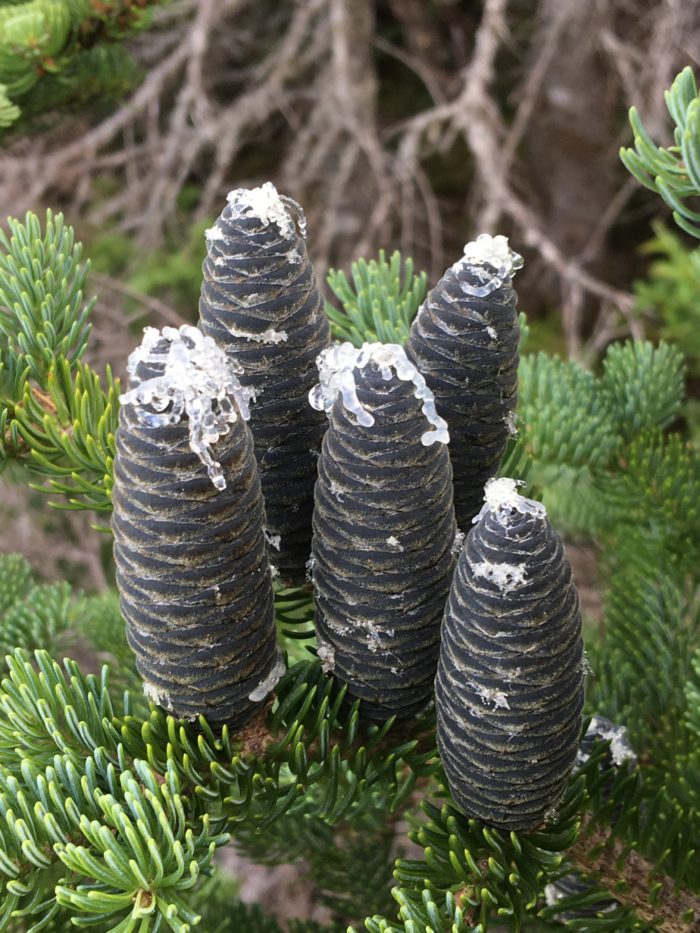 Sap on the upright pinecones 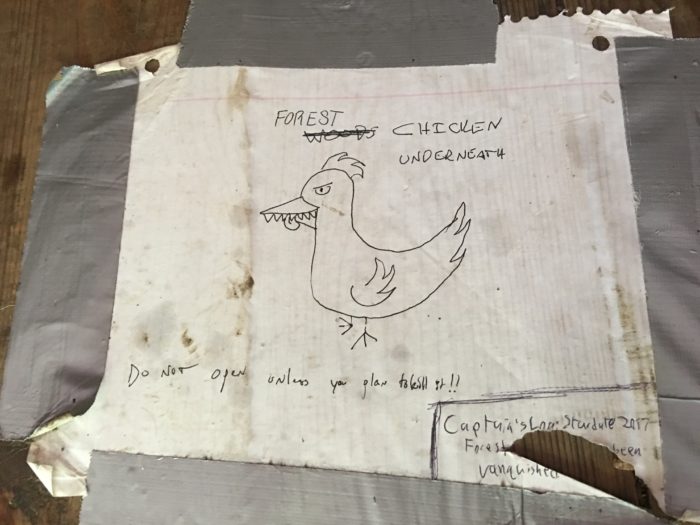 Last night I woke up around midnight to splashing in the pond. We were camped right next to the pond. In the shelter log, someone had written how a moose walked right in front of the shelter a few days ago. I was too tired to get up and investigate, and I figured if it came into camp I could shine my light and see what it was.

It rained overnight and a little in the morning. I woke up to the soft sprinkling of drops from trees on my tarp. We ate breakfast in the shelter and shared Rash’s gas since mine ran out last night. Tiptoe, Flip, and Mario were eating breakfast with us. Tiptoe is in her 70’s, soft spoken, and had some great stories. She told us a story about doing her section a few years ago and breaking her ankle during a fall. She didn’t have a cell phone, so she patiently waited for hikers to come by and help. Thankfully, 2 hikers come by that also happened to have wilderness medical training and got her evacuated. Breaking her ankle didn’t deter her from hiking in the least, and she was back on the trail the next year, but her children now force her to carry a cell phone.

Rash, Piñata, and I started our hike at a brisk pace. The terrain was flat with some rocky parts. On a flat part with a high drop off to the river below, I had a sudden pain on my left lower leg. It was a numbing pain like from a stinging nettle, so my first thought was somehow a nettle made its way inside my legging. I pulled up my pants and felt a bug on the outside of my legging that fell off. No nettles were inside my pants, and I realized the bug that had fallen off was probably the culprit of my excruciating pain. Piñata got stung yesterday and this was probably something similar. Neither of us saw what kind of bug it was, but it hurt like the dickens. No stinger was embedded thankfully. The area on my leg got a little swollen and hard, and was painful for the rest of the day. 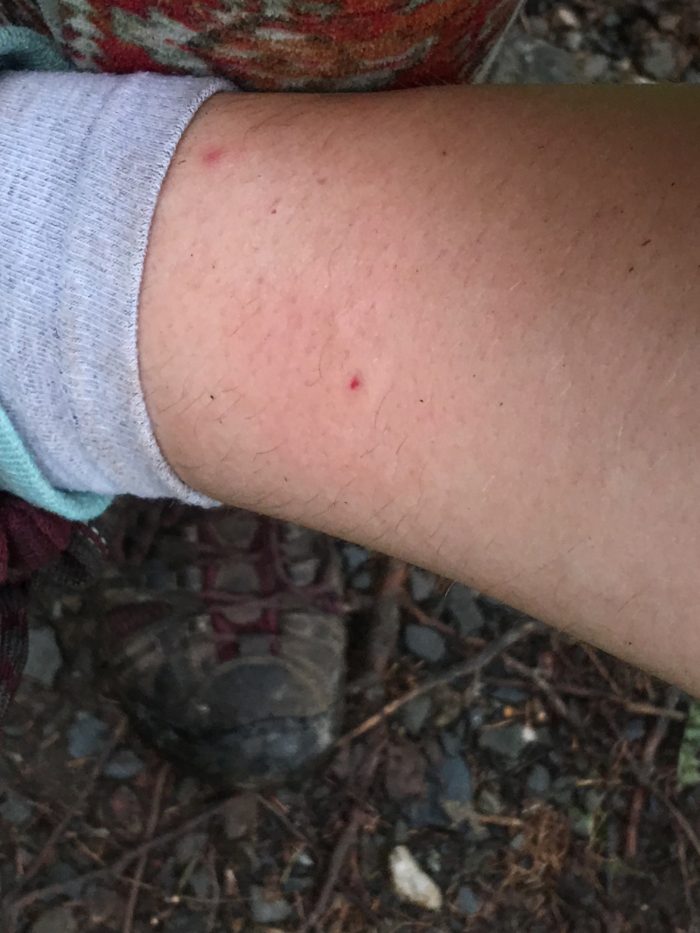 The result of an angry insect

We came to our first river ford of the trail. A SOBO was on our side relaxing, and as we took off our shoes, she told us we had another ford ~7 miles down trail. Rash crossed first, then Piñata and I as Rash took a video. Flip came up as we were drying our feet and hiked on. Mario crossed but left his boots on the south side, so the SOBO hiker met him half way with his boots in tow. 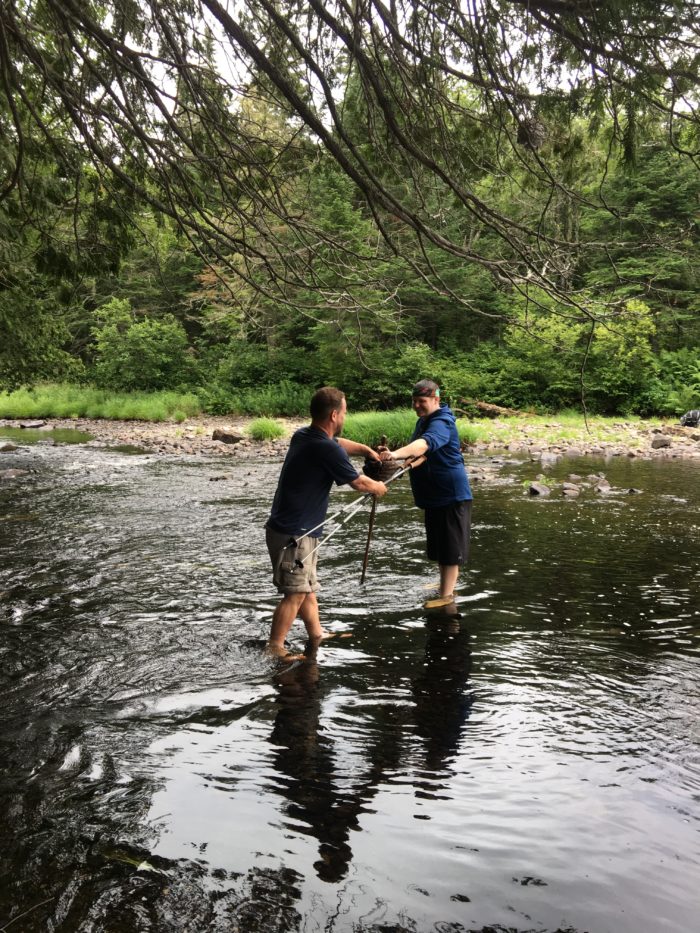 Mario and the SOBO with his boots 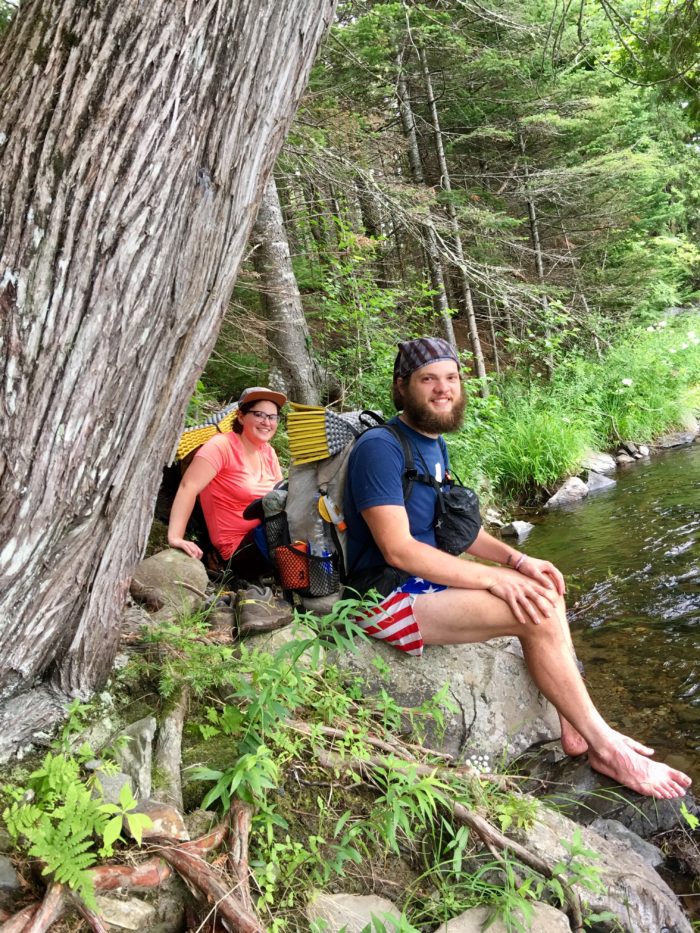 Rash and Piñata drying their feet 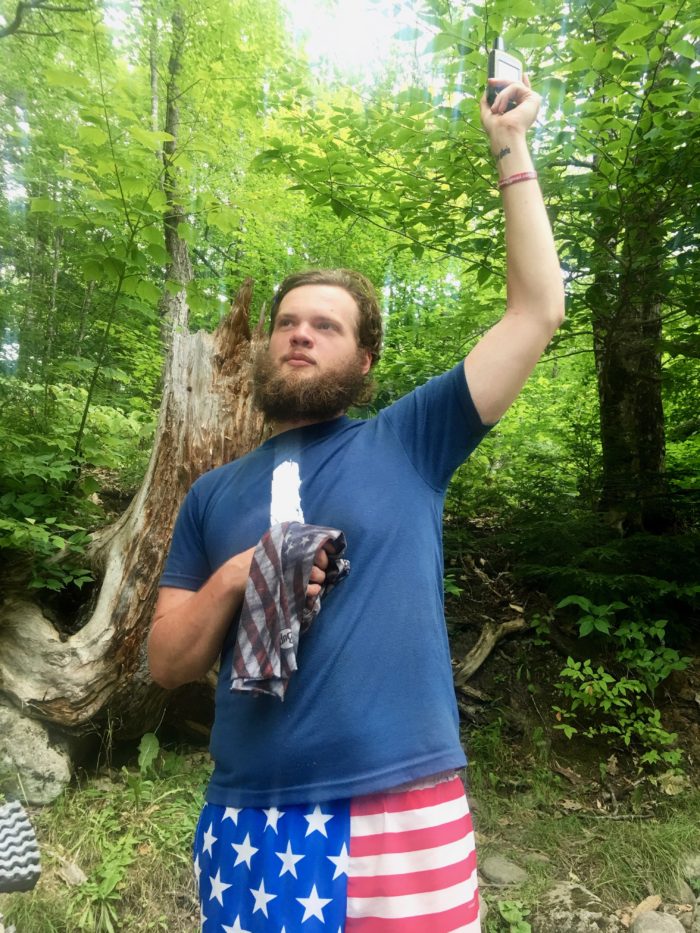 We hiked to the next 2 fords listed in the book, but someone found a trail around the stream that crossed 2 very shallow areas with rocks. We stopped at the shelter just as it started raining lightly and ended up taking a nap. I texted Louis from my tracker and we got water while we got eaten alive by mosquitoes. The next ford we came to was deeper than our first, and we had to roll up our pants past our knees to not get wet. We came to the road, and I called the shuttle to pick us up.

Rash was ahead in the parking lot, talking with a guy and a girl. They offered us pizza, and when Piñata came up, she immediately recognized the guy as Clean Skittles from his YouTube videos. We got the shuttle to Shaw’s, and found a ton of hikers we knew: Sauce, Snooze, Keller, Flip, Flicker, Gandolf, and Surefoot (who we hadn’t seen since Virginia). We went to dinner and sat outside watching the sunset. I got pot roast which was delicious, and we turned in back at the hostel.

I woke up early to use the restroom. I walked from the bunkhouse, petting Zander as I passed him. I got back in bed afterwards, but couldn’t go back to sleep. I was nervous about starting the last leg of my journey. Around 7, I joined Rash, Piñata, Flicker, Gandolf, Keller, Flip, and 2 girls at the kitchen table for breakfast. I ordered eggs over medium and got a huge plate of eggs, hash browns (little cubes- my favorite), and bacon. The pancakes came out later: huge stacks of blueberry pancakes with butter and maple syrup. We feasted like hiker royalty, and it made me sad for the nearing end of our trip when I wouldn’t be able to eat mounds of food and still be in shape. 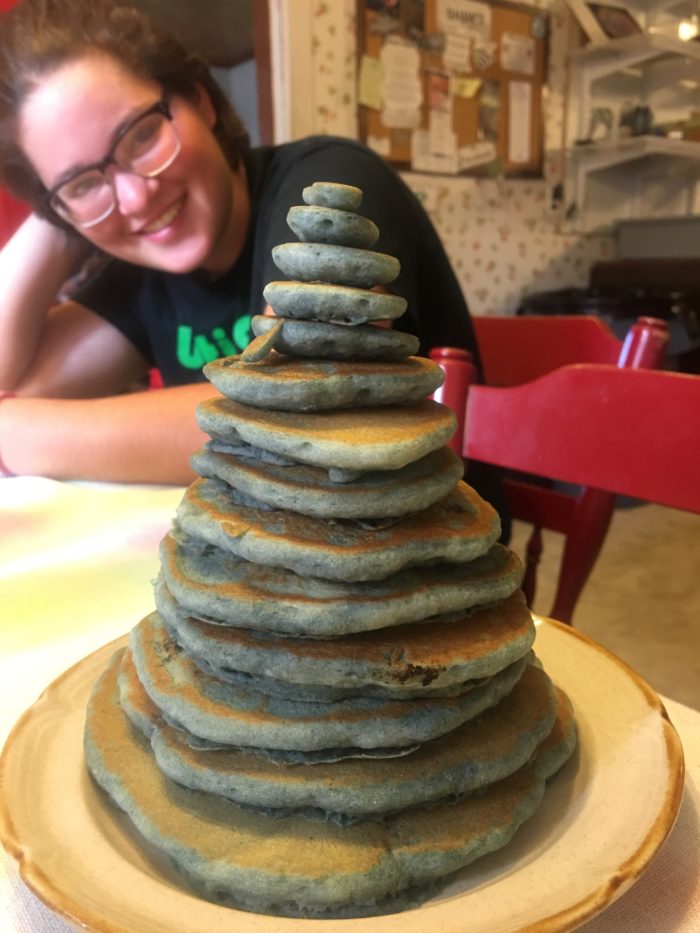 Piñata with the pancake carin 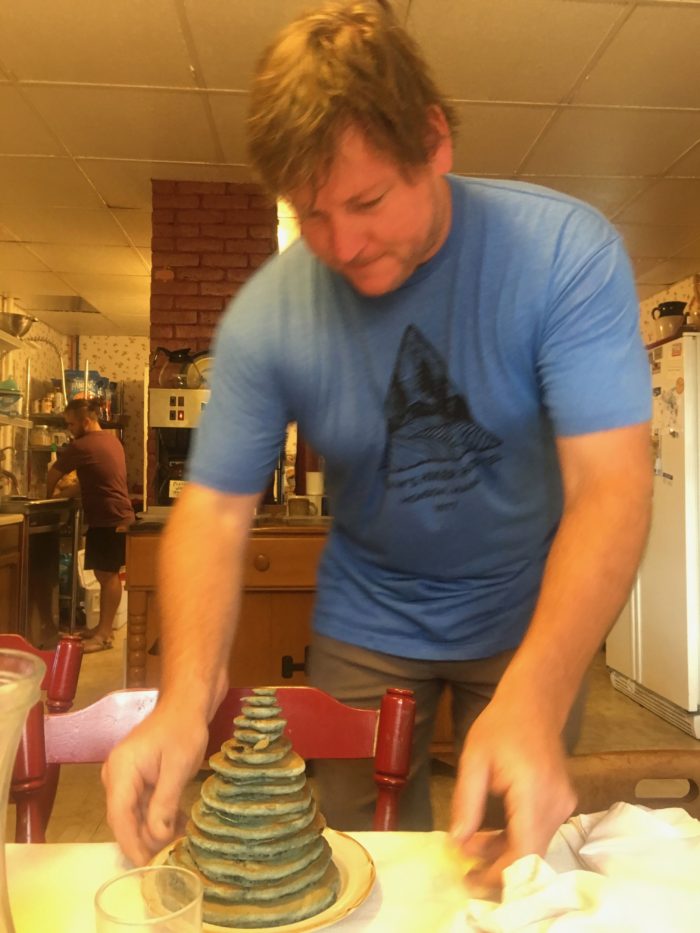 Only the finest blueberry pancakes from Shaw’s 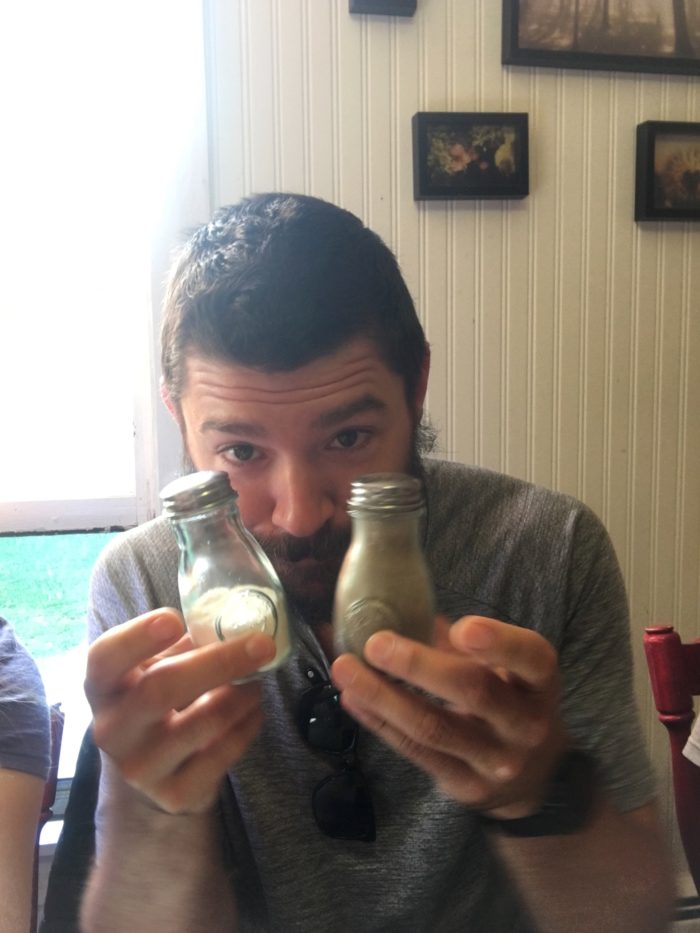 Flip displaying the salt and pepper shakers, which “always go together” 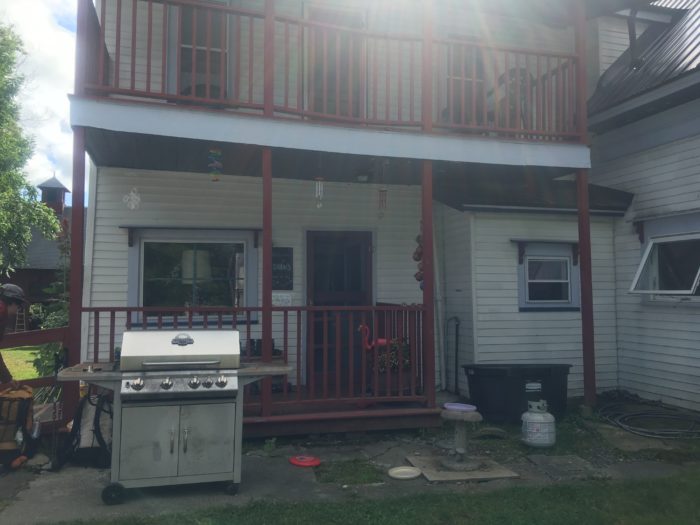 Barb came to Shaw’s to pick us up and bring us to the grocery store in Greenville. We made a stop by the post office where I picked up my food box and my new socks my grandma sent. Thanks Grammy! We shopped quickly and sorted out our food on the bed of Barb’s truck. I made sure I had 7 days (6 days with 1 extra in case) which barely fit into my pack. My pack was ridiculously heavy, and reminded me of hiking in the Smokies with my heavy winter gear.

Barb took us to the trailhead and we thanked her and said goodbye. We hiked into the woods, saying goodbye to civilization for 6 days, and started our 100 mile wilderness. The terrain was rocky with roots, but the first few miles went by quickly. We took a quick break at the first shelter, talked with some section hikers and some MATC workers. We left just as a large group of very loud teenager girls showed up to the shelter.

*Welcome to the 100 mile wilderness

We had to ford 2 rivers. The first river was shallow and short. The second river was much deeper, and we struggled to get across. It hasn’t rained much, and a few of the listed fords we’ve thankfully been able to rock hop. I wonder how other hikers will fare with the second river crossing after a hard rain, because it was borderline dangerous when we crossed.

We hiked to the shelter where we originally planned on staying the night, but decided to push onto the next shelter 4.7 miles ahead. The rest of the hiking was enjoyable, even though my feet were hurting from the rocks. We got in just as it was getting dark, and set up our hammocks and ate dinner in the dark. I had leftover pot roast I had frozen and packed out, along with a packet of chicken. It was the perfect meal to end a long day.