Leaving
I finally left Erwin and hiked out slow and steady to protect my leg.  I didn’t see a lot of people hiking that day other than one couple who had one of their packs weighing less than 16 pounds (mines 35).  I collected some water and camped by myself that night right next to a gap.  It felt good to be back on the trail.
That soggy sandwich
The next day at about noon it started to downpour. I was able to see beauty spot right before it started and the clouds and fog  were settling in.  Other than eating a soggy tuna wrap that I made in the rain and being cold, the rain helped me climb a relatively steep mountain and gave me reason not to stop too much.  The downhill was painful and I was the first one at the shelter so I claimed a spot to stay dry.  I hadn’t seen any people that day but around dinner many people showed up who had hiked from town.  I was impressed but content I hadn’t spent that long in the rain.
Greasy Gap Friendly
I had planned to resupply at a place called Greasy Gap Hostel.  I read that it was self serve on Saturday and hoped for the best.  I ran into a man serving coffee and bananas at one of the gaps and hung out then walked till my leg was bothering me and stopped.  A man named White Owl showed up and I walked with him to greasy gap.  He set a good pace and pointed out different plants to me while talking about Maine (where he was from).  We parted ways and I headed down an old forest road marked with purple and green duck tape.  After what seemed a mile I saw the hostel and walked in.  It was inside a woman’s house named who was named Connie.  I bought some food for a day and then saw that she had amazing Ben and Jerry’s ice cream.  I settled in for some Tonight Dough and watched the movie the other hikers had picked out.  I was going to head out but then one of the dudes named Lassy said he was going to pick up cheese burgers and they started another movie.  I decided I might as well stay but didn’t move my pack inside till about 8 that night.  It was a pretty chill place and Goose was there from my party zero day.  Plus it was nice going to sleep in a bed.
Roan
I paid for Connie to make me some cheese grits the next day and I have to say they were some of the best grits I’ve had.  I had a late start but the terrain was pretty mild.  I planned to have lunch at the gap right before the 2300 foot climb to Roan Mountain.  When I got there two ladies had set up some trail magic of pulled pork BBQ sandwiches, Pringles, Dill pickles, cupcakes, and drinks.  It was the best spread I had seen so far and enjoyed lunch and learned that one of the Woman, Kansas, had thru hiked last year.  After fueling up I headed up the mountain which was not an easy climb at all but I did ok on time.  I got to Roan High Knob shelter (the highest shelter on the AT) about an hour before sundown and had just enough time to set up and cook before it got dark. 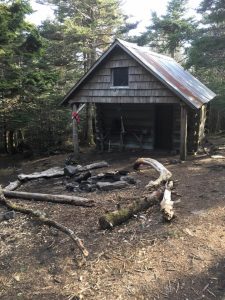 The Barn
The next day I hiked down to Carvers Gap and entered my first familiar territory on the AT.  My second ever backpacking trip had been with my father and his friends from Carvers Gap to route 19.  The trail felt different this time and I feel like more switch backs had been added.  I also got to go through it in better weather.  I went up two balds and got fantastic 360 degree views that included roan mountain in the background.  I think my favorite bald of the trip was the second one, Jane Bald just because I could see where I had come from and there were nice rocks to relax on.  I walked down to the barn we had once camped at and no one was there.  The porch overlooked the view of a valley and I couldn’t resist a night there so I set up camp early.  I spent most of the afternoon enjoying the view and a few more people came so I wasn’t alone.  That night there were lights in the valley and surprisingly sounds of wild turkey calls! 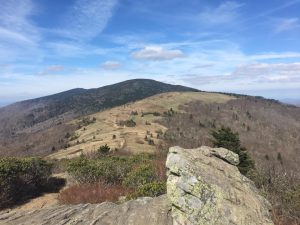 Finishing another state
The next day I watched the sunrise color the valley from my sleeping bag.  Then it was time to climb up to little hump bald.  On the way up I could see the barn in the distance.  At top I got a view of hump mountain.  It looked a little intense and soon enough I was going up it.  On top It was windy and the sun was hidden by clouds but I could just make out on top the ridge I had followed to this point.  From there it was all downhill, and a rocky one at that.  I was in pain going down.  I got to the route 19 and walked on the side of the road till I came to Mountain Harbor Hostel (I had heard of there breakfast and needed food).  I bought a few days of food and then Frisbee showed up and wanted to go to town so we stood in front of the road and for the first time of the trip I was smiling with my arm outstretched and thumb up.  We got a ride in the back of a pickup truck that had just hitched some hikers.  We went and got burgers and delicious milk shakes.  When we were done someone got us a ride back in a work vehicle.  I took a shower and put on clean cloths when I got back and couldn’t of been happier.  I was getting pretty close to Virginia with only one town left in Tennessee to pass.  Oh and I also left the North Carolina boarder sign that day so two states done!
< Previous Post
Next Post >