Strolling through the peaceful little town of Hot Springs, NC, you don’t get the feeling that you get in so many other cities, the uneasy feeling that makes you want to watch your back. Instead, what you get is a pleasant place to kick back, relax, let down your guard and recover from the rigors of the trail.

But, unnoticed by many is a man who blends into the background; quietly watching, a keeper of peace, an enforcer of law and order. 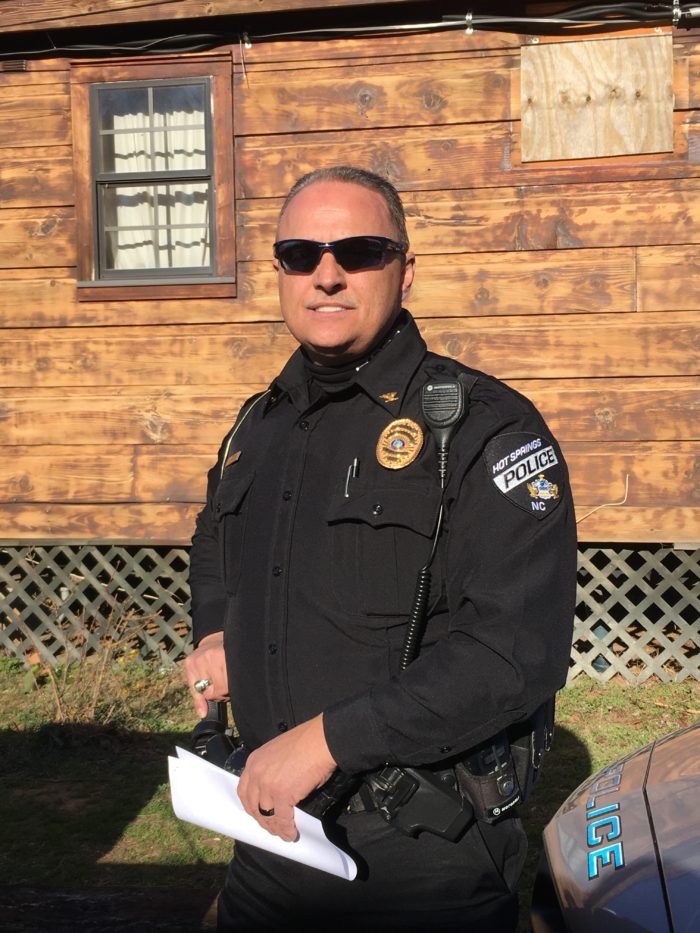 When I first met officer Shelton, he was chatting with some men sitting at a picnic table beside the sidewalk. Shelton was a sharply dressed, physically-fit guy—a cop who looked like he could handle himself in any situation. He was observant, sizing me up the moment I walked up to introduce myself. However, to my relief, he let down his guard and agreed to an interview.

Since it was windy and cold out on the street, he graciously invited me over to his downtown office, and sat across from me at his neatly organized desk.

As I began asking questions, I noticed his body language. He sat there rigidly, his back straight, his chest and torso puffed out with the extra thickness of his body armor. He was a clean-cut, clean-shaven man, wearing a black uniform that was neat and orderly,, with all its accoutrements in impeccable order. Even his fingernails were neatly trimmed. Yes, Officer Shelton was the embodiment of calm, cool ,and collected—a no-nonsense policeman.

David Shelton grew up not far from Hot Springs, in the Spring Creek area of Western North Carolina and has been living around here for all of his 50 years. A police officer for 14 years, he divides his time by working two jobs, as most policeman do out of economic necessity: Chief of Police for Hot Springs, and an officer for the North Carolina State Police.

He said that many years ago, his initial impression of hikers was that they seemed educated, and were most likely to be teachers, lawyers, and other such white-collar professionals. Therefore, he thought of them as mature, responsible adult professionals who (for the most part) behaved themselves.

He said that things have changed since his early years dealing with hikers. They’ve changed to a much more youthful crowd, many seeming to be right out of high school, or between college and other pursuits, not yet established in in a profession. Because of this, plus the sheer increase in the volume of hikers, they’ve unfortunately caused some problems for the town.

The first thing that usually happens was the hikers would stroll into town, leaving their large backpacks strewn up and down the sidewalks. On top of this, he said many hikers would recline on the sidewalks, making it difficult for pedestrians to walk past without forcing them to either step over the hikers, or have to walk in the street. He said he once observed an elderly resident with a walker having a difficult time making her way down the sidewalk. This is when he usually has to step in and ask people to move.

Officer Shelton said it starts when hikers, having been without alcohol for several days, come into town and want to make up for lost time. Consequently, they drink way over their limit and become public nuisances. The routine problems he often encounters are open containers in public. “I can work around it with a warning on the first offense,” he said, “But when you’re standing downtown, across the street from my office, holding a beer in one hand and relieving yourself on the railroad tracks, we’ve got a problem.” Yes, this actually happened once.

From drunken hikers stumbling in the streets, to accosting people walking down the sidewalks, to fights, excessive alcohol consumption does makes his job extremely difficult.

He has had to deal with some tense hiker situations. During one of the festivals, a large group of intoxicated young men (mostly hikers) gathered in the streets downtown, arguing with another group of drunken hikers. With this situation threatening to turn into a riot, Officer Shelton strode into the middle of these groups and persuaded them to break it up and move on. He said that he was glad that they complied, or “they could have easily overpowered me.”

On another occasion, Officer Shelton had to chase down a young man on foot, a former Army Ranger who was still very fit. He said that he almost wasn’t able to catch him but that he persisted, finally catching up and making the arrest.

When asked if he ever had to draw his gun, he said its been extremely rare. He said that he chooses the level of force to employ based on the situation. He made it clear that his response to trouble has always been one of restraint.

There is group of hikers Officer Shelton has the most problems with, what he calls the “two-percenters.” He said he can spot these kinds of hikers mostly by the way they dress. They are drifters who live mostly on the trail, hiking from town to town, and can be identified by blue jeans, combat boots, and other clothing/gear not made of the modern, lightweight materials that most thru-hikers wear.

He said that whenever they are in town, crime increases dramatically, mostly in the form of shoplifting, theft, and drug use. Oftentimes, the two-percenters will bring drugs to sell to the hikers as a way to make extra money. He gets a lot of complaints of narcotics sales, especially during the festivals hosted by Hot Springs.

Officer Shelton said that when hikers come to Hot Springs, he would like hikers to “Know your limitations and don’t exceed them.”

He also added that, during the city festivals, since he often puts in 18-20 hour shifts, “Don’t be offended if this makes me seem a little irritable.”

See ya around, Officer Shelton!

Officer Shelton seemed like a fair but firm policeman; one worth getting to know. If you see him around town, why not walk up and give him a handshake and a big “Thank you” for the important job that he does.