After several decent nights of sleep, the lean-to love affair was over. Shortly before dusk last night, we were joined by Bob Cratchit and his dog Tiny Tim. He was an informative sobo thru-hiker and the dog was cute. However I slept poorly, partly because Bob snored and partly due to anxious waking to check the time. Eventually I deflated my pad, signaling Serendipity and Tracks that it was time to rise. We were on trail as it got light enough to see.

At first I worried about Dinglebeary, but he checked in. Then it was a mad dash to cover 13 miles by 1 pm. The trail went over three 4,000 ft. peaks, dipping down after the first to cross a stream on a bouncy wood plank set between two rocks. We passed the 2,000 mile mark. Such a huge milestone! Afterwards it was mostly downhill, we did 3 mph and happily reunited with Hobble-It. The four of us climbed into the Hostel of Maine van. 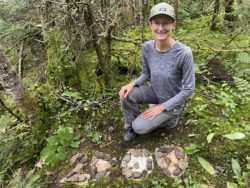 At the hostel, I put items needed for the stay into a paper bag. My pack went into an outdoor wooden locker (it does smell rank). All of us were required to shower before we could enter the hostel, which was so nice. The interior walls were wood-lined. My bunk had a nook, reading lamp, and its own outlet. There was a common room filled with cozy chairs and a dining room with lots of natural lighting.

A resupply box from my Colorado friends was waiting for me. It contained cheddar biscuits, coffee cake, and brownies as well as fresh veggies. There were fun surprises such as honey sticks, boba candy, olives, and my favorite flavor of Luna bar. I put a cheese tamale in the microwave and smiled at the veggie blend sent by little Wren. As I read three cards with sweet and supportive messages, I was overcome with love for my friends. 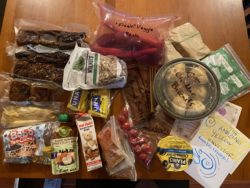 Dinglebeary arrived on the 4:30 pm shuttle, reuniting our tramily. We feasted on copious amounts of food. All too soon the day was at an end.

An overcast morning arrived and I reassembled my pack. There was an excellent continental breakfast. I was excited to have both coffee and orange juice. A big group of us headed back to the trail, filling the van. It had a cool painting of Horns Pond which featured a moose and a suave duck family. 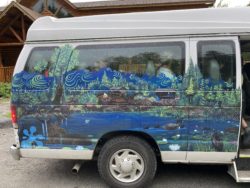 Whereas yesterday my entire focus was making it to the hostel, I was immediately happy to be back in the woods. Squirrels berated us from the trees and one ran down the path toward me, its mouth full of leaves. The forest was absolutely beautiful. It dripped, vibrant green moss coated rocks, and I spotted so many different mushrooms. The first viewpoint offered glimpses of a lake as fog drifted across distant hills. 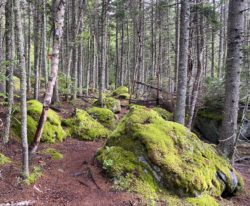 Today confirmed that Maine is my favorite state of the trail. We hiked over Bigelow Mountain’s West and Avery Peaks, the last time we will be over 4,000 ft. until Katahdin. The climb took us into the alpine zone and along a ridge with fantastic views. To the north stretched Flagstaff Lake with pale shoreline and multiple islands. I hoped several moose were foraging in the shallows of the lake or relaxing amidst the pines. We ate lunch on the first peak. On the second peak there was a memorial to Myron Avery, who spear-headed the trail’s creation. 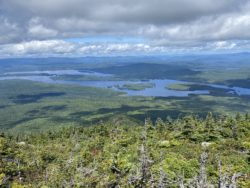 When I arrived at Little Bigelow lean-to, I was surprised to see quite a crowd. A group of college students and a dozen of us thru-hikers. One guy started a fire and I ate dinner next to it along with my tramily, Rawhide, and Florida Man. It got chilly. I put on my down booties as I prepared for bed and kept them on all night. They are so cozy!

I had more fuel than I needed to reach Katahdin so I cooked my oats for breakfast. Dinglebeary joined Serendipity and I where we sat eating. Suddenly green pinecones began to fall, one every quarter minute then more rapidly. It appeared that a squirrel was targeting us. I had been eating in my tent doorway so I finished packing it up and got hit in the neck. Dinglebeary later found a stray pinecone in his food bag.

As we hiked, the squirrels chittered and I heard pinecones fall from trees. Perhaps the cold night triggered them to ramp up food storage? Serendipity and I watched one squirrel drop a pinecone in a hole and bury it. She tried to help by adding a couple more.

It was a gorgeous day, sunny but not hot. The terrain was flat for the AT, though plenty of rocks and roots kept my eyes on the trail. Near noon, Serendipity and I took a snack break on a fallen log. I enjoyed and shared Forrest’s delicious coffee cake. Shortly after, we reached East Carry Pond. It had a sandy beach upon which Hobble-It sat. Serendipity and I stripped down to our underwear. She waded in and I went for a swim, joined by Dinglebeary who arrived shortly after. The water was clear, cool, and refreshing. I sat on the beach to dry. 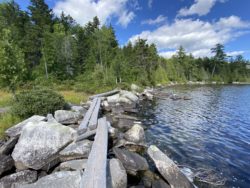 Since I felt sluggish in the afternoon, I started The Ballad of Songbirds and Snakes. Kneelynd appeared and we chatted for the last mile into Pierce Pond Lean-to. I found the rest of the tramily waiting for me. We decided to end the day and set up tents on the hilly shore of the pond. Serendipity and I had a nice area near our tents so the others joined us and we sat in a half circle to eat dinner. From the WhatsApp chat we found out that Cricket & Hummingbird summited Katahdin yesterday. So awesome! The first of our extended tramily to finish.

Following breakfast, the day began with a ford of the Pierce Pond outlet. I took my shoes off and waded across in bare feet, the water nearly knee deep in the middle. Dinglebeary managed to rock and branch hop his way across the stream. It was then a four mile walk to the Kennebec River, most of it along Pierce Pond Stream. There were occasional deep pools and small waterfalls.

The Kennebec River is 400 feet wide with a strong current. Due to the danger of fording, the ATC provides a free canoe ferry from 9 am to 2 pm during peak hiking season. There was already a line when I arrived at 9 am. I took pictures of Tracks and Serendipity in the canoe. When it was my turn, I sat in the middle while Rawhide sat upfront. He paddled on the left side while the canoe operator, Greg, paddled on the right. It only took a few minutes to go across. 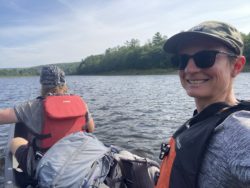 I felt good and took only a short water break before stopping for lunch on Pleasant Pond Mountain. It was nice to climb a mountain after yesterday’s flatness. Plus there was a breeze and cell service on top. As I enjoyed a brownie and coffee cake, Serendipity and Tracks arrived and joined me in the shade.

During an afternoon of descending, I spotted a garter snake and a tiny toad. The five of us camped shy of Bald Mountain Brook Lean-to in a spot near its brook. We had the campsite to ourselves, which was a welcome change from the last two nights.