My son and I were asked what the best part of our thru-hike was. Here is what we came up with. 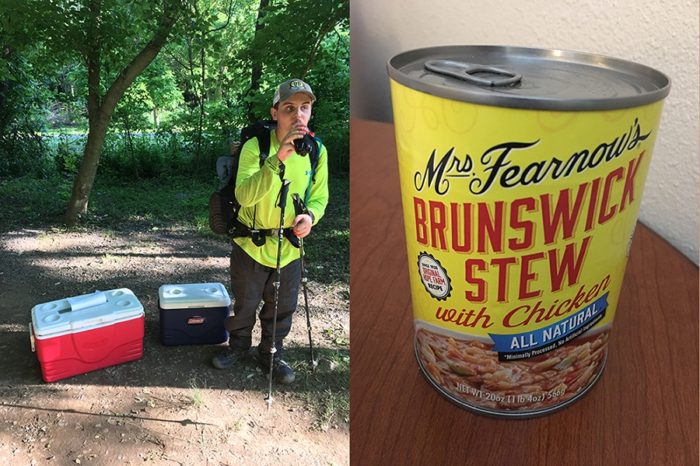 On the trail there are very few things that afford thru-hikers relative comfort. No matter how many luxury items you sneak into your pack, a thru-hiker lives in relative squalor. We experienced our first instance of trail magic early on our first day. I was so unsure as to what I was witnessing that I was reluctant to accept the generosity of strangers. By the time we reached Red Truck and Green Truck’s hiker feed in Deep Gap, I was no longer reluctant. I must have drank a gallon of Coca-Cola and consumed equal amounts of their Brunswick Stew. Our last trail wagic was bottomless Cokes and piles of Peanut M&Ms on our last day in the 100-Mile Wilderness… and it was as good as it gets. The kindness of others is one of the things that drew me north. Even though the instances of magic thinned out the farther north we hiked, I was always surprised and appreciative of the gestures that made our hike a little bit easier. 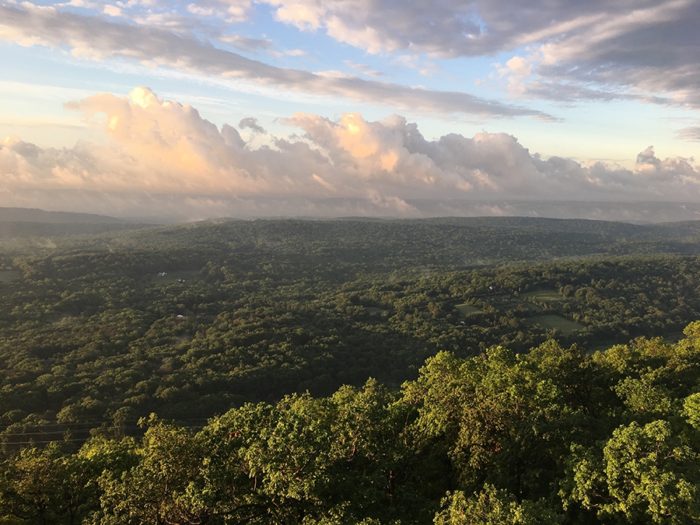 In our experience, it was often tree-covered summits or heavy clouds that masked any glimpse at the grandeur we assumed existed beyond. It wasn’t until we reached Indian Mountain fire tower, just shy of the 100-mile mark, that we shared our first truly magnificent view. After hiking hundreds and then thousands of miles, I thought perhaps the views would lose their luster or become mundane, but they did not. I am happy to report that the special feeling you experience when standing atop a mountain is as fresh and rewarding as each time before. 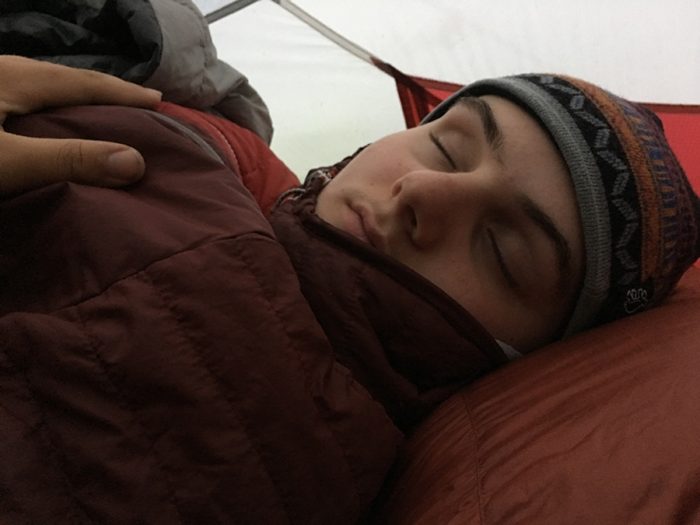 I don’t want to suggest that as a thru-hiker you will ever be dry, but on the odd occasion you can manage it, being dry is the most satisfying state of being I have ever known. Just the rare fleeting feeling of being completely dry for the brief moment when you climb into your sleeping bag is glorious. 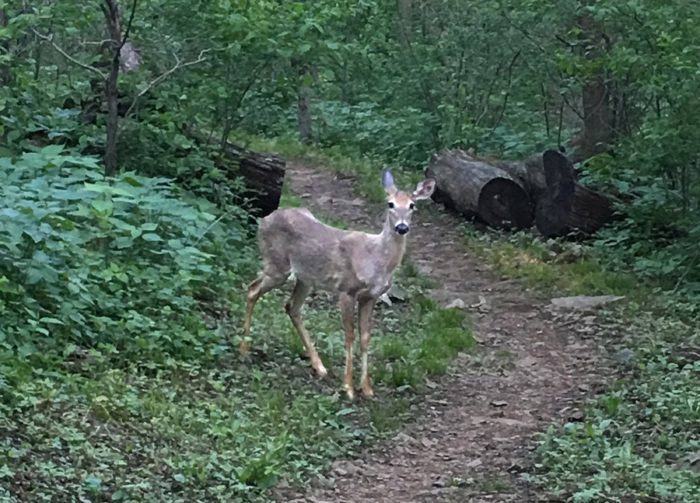 There are few things as magical as spotting a deer only feet away when you pause for a brief respite, except perhaps spotting a tiny fawn peeking out from behind its mama’s legs. The abundance of wildlife along the length of the Appalachian Trail is enough to keep you hiking just a little farther each day. 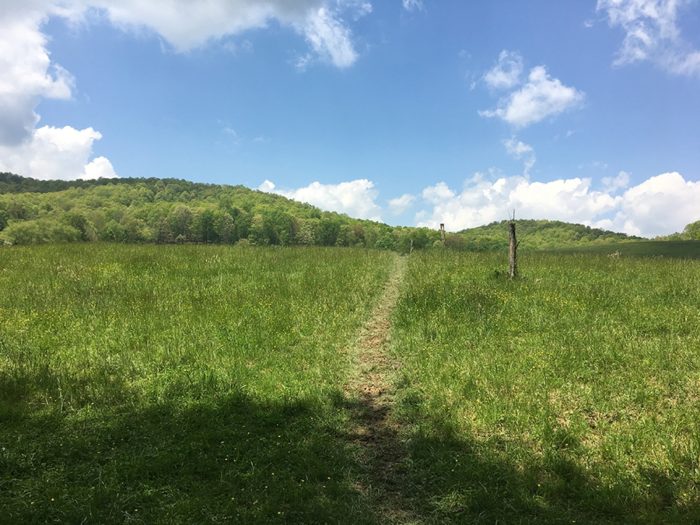 Three out of every four days of our thru-hike it rained – hard. The rain tested our mental fortitude and our physical limits in equal measure. It rained so often and for so long, we were confused when we spotted a patch of blue sky or a glimpse of unfiltered sunlight. A sunny day was a gift not to be squandered or taken for granted. Not only does a sunny day boost morale, but it gives you a much-needed chance to warm up and dry your clothes and gear just in time for the next deluge.

1) Sitting in a Pine Grove on Roan High Knob

My son was good at keeping to our schedule of stopping every hour for a snack and a rest. It was a regimen than kept us moving with relative efficiency and longevity. Our breaks were quiet, utilitarian affairs. However, every so often there were moments when Aidan would insist on a break because he liked the feeling of a place. These unscheduled, inspired little stops transcended the necessity of feeding and recouping, and became magical near-spiritual meditations. We had been climbing Roan High Knob, leapfrogging a handful of other thru-hikers for a couple of hours, when we entered a pine grove. Aidan was taken by this pine grove in such a way that he insisted we stop. He dropped his pack and leaned against a tree looking up into the canopy. I followed his example and was quickly transported from the stresses of the day to a place of peace and tranquility. Aidan commented on how peaceful the grove made him feel. We sat there for a long time. Other hikers passed and asked if everything was alright, as there was nothing particularly notable about the grove. I just smiled and waved them on. My son was near enlightenment.

Our miles each day became longer and our goals more ambitious. We would hike from sunrise to sunset every day. There were some nights when our ambitions were not matched by our speed and we were relegated to arriving at camp after dark. On one such night, we were pushing hard to make camp before sundown, and we were feeling the strain. We crossed a crystal clear creek and I decided we were going to stop. I pulled off my boots and socks, and plunged my feet into the ice cold water. Aidan resisted the invitation to do the same, as he didn’t want to removed his boots, socks, and Band-Aids. He didn’t want to have to go through the process of drying his feet and rebandaging them for the rest of the hike. After some negotiation, I convinced him to join me. He was immediately glad he had. We dropped two cans of root beer into the creek and soon after were slurping the sugary elixir. We hiked into the night and giddily set up camp in the dark, happy as clams and rejuvenated by the stolen moments at the creek.

3) Stealth Camping away from the Rest of the World 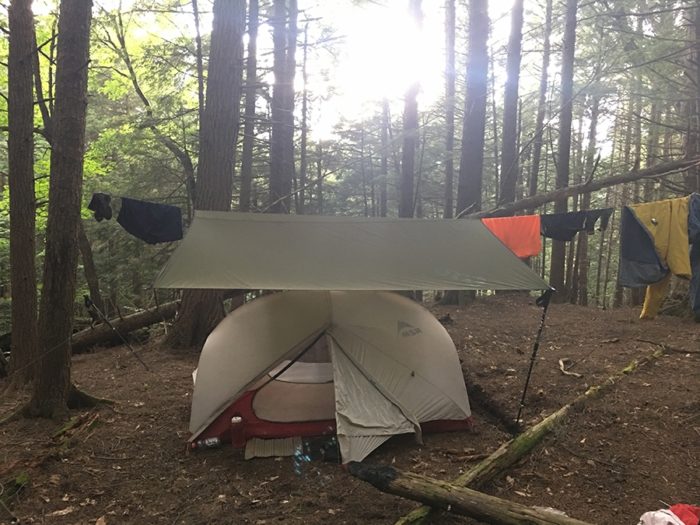 We stopped by a farm stand just outside Woodstock, VT. They sold fresh-baked pies. We each ordered a pie. I chose a blueberry-peach pie with a crumble topping. Aidan chose a raspberry-cherry pie. I ate mine, and half of Aidan’s, who couldn’t finish his. I then took a nap. We continued the hike up the next mountain. We had plenty of time and loads of energy to reach the next shelter. Aidan spotted a beautiful stealth site among 100-foot trees. We opted to stop, set camp, and enjoy the early evening. Finding solitude is difficult, even along the Appalachian Trail, but when you do, it is nurturing and regenerative. 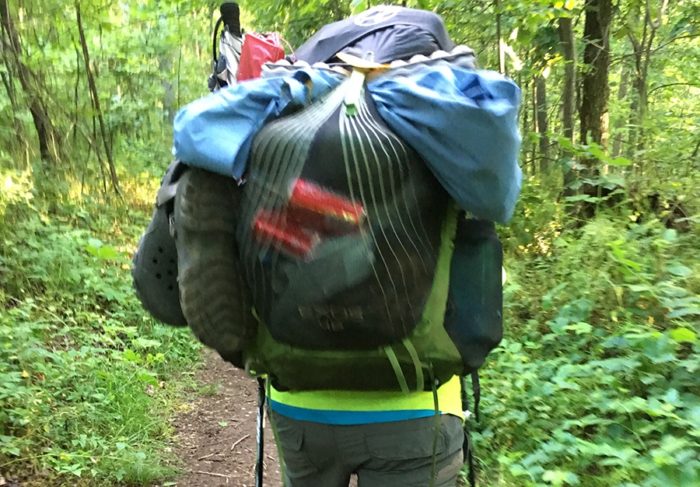 We would carry a six pack of Coke out of every town. Yup, cans of soda. How’s that for lightweight backpacking? When the Cokes were gone, we would carry spare change in case we found the odd soda machine at a road crossing or parking area. Coca-Cola is a magic elixir that would carry Aidan up the steepest, longest climbs, or to hike those extra miles.

5) Hiking with My Son

No more to say about that. 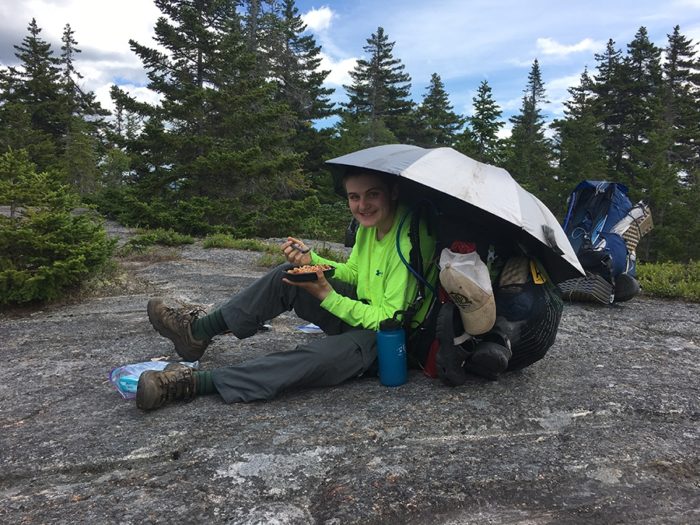