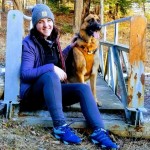 Welp. The week has come. We’ll load up in a few days, my parents, my grandmas, my grandma’s adorable disabled corgi, and myself. We’ll drive down to Georgia (a whopping 17 hour drive). We’ll drive up Springer, they’ll hike to the summit with me, take the customary pictures, probably cry, and then I’ll be off.

That’s it. I’ll be on the Appalachian Trail. This many-year-in-the-making-dream will suddenly and instantly become a reality. I’m pretty shaken about that, and at the same time it feels unreal. It hasn’t hit me yet. The pre-trail nerves and anxiety have, however. I’ve been checking the weather pretty aggressively  (thankful I’ll miss most of the snow and cold this week) and am horrified by the ever fluctuating chance of rain. I’ve done rain before, don’t get me wrong, but starting the first three or four days of this six month journey in a cold downpour sounds like a pretty crappy beginning.

In the last few days, I’ve been trying to check off the last of my to-do list items.

Crossed the T’s and Dotted the I’s On Gear: 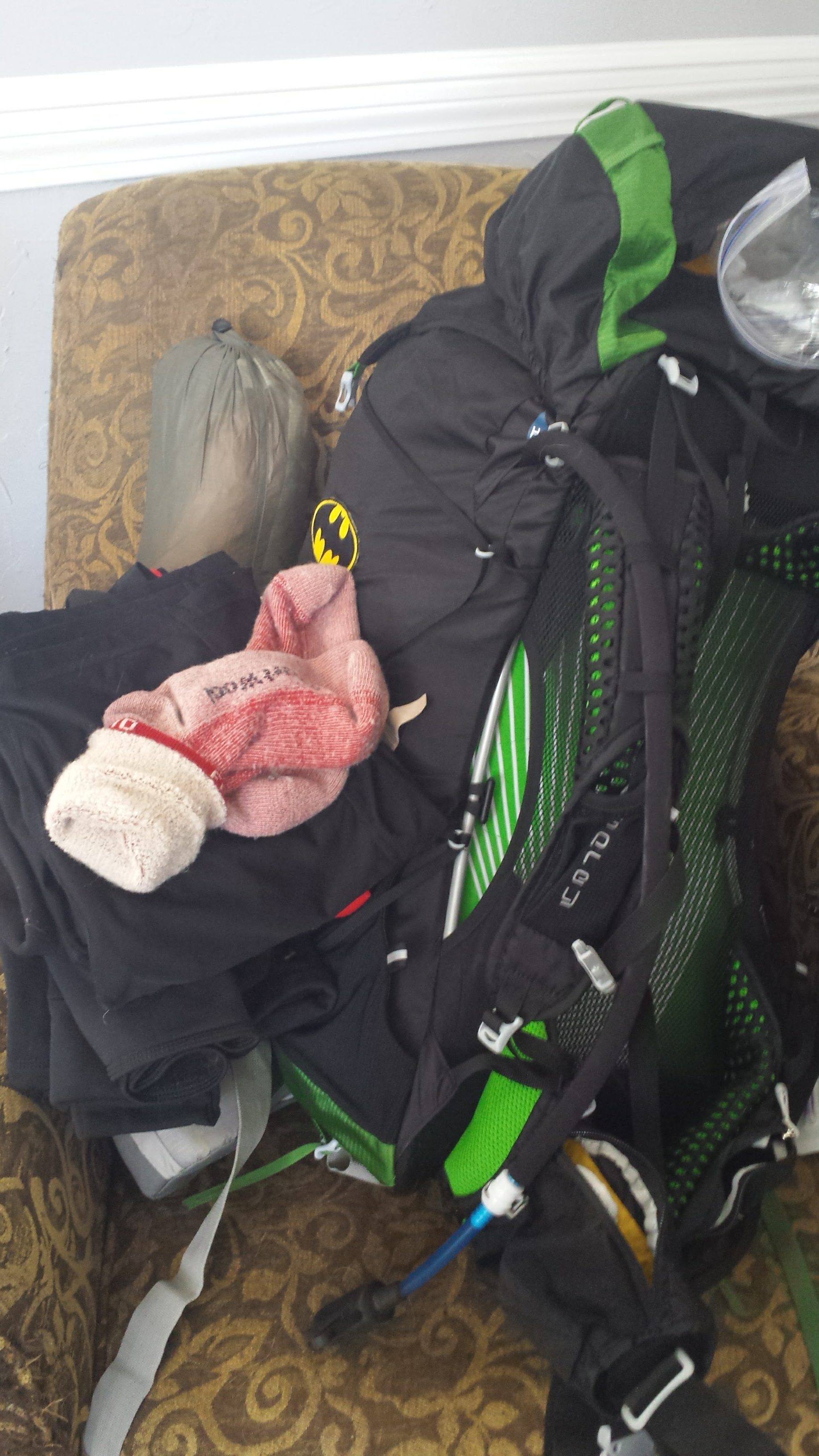 I sewed patches onto my trail famous bag, the Exos 58, to help demarcate it from the other thousands out there. I probably joined a group of patched packers that is equal in size to “people with unmarked Exos,” but at least mine will have Batman and pizza on it. What more does a girl need? For the record: buy iron on patches. Hand stitching those buggers on as someone who is totally inept with a needle and thread was one of the more frustrating tasks I’ve done this week and I would much, much rather risk losing the iron on than go through that again.

My trail clothes went a round in the washer with a little extra OxiClean, and danced with not one, but two, dryer sheets in hopes of imparting on them a little bit of home and resilience against my potent trail stench for….two days probably. Also, fluffy socks. ‘Nuff said.

The tiny things that have been floating around in my personal belongings made their way into my gear, including nail clippers, pens, the repair kit, BodyGlide, and some stolen dermabond and butterfly closures. I’ve put the final touches on my rough plan (and my less-than-rough plan for the first couple of weeks) and thus made my AWOL guide very intimate with Google Sheets. 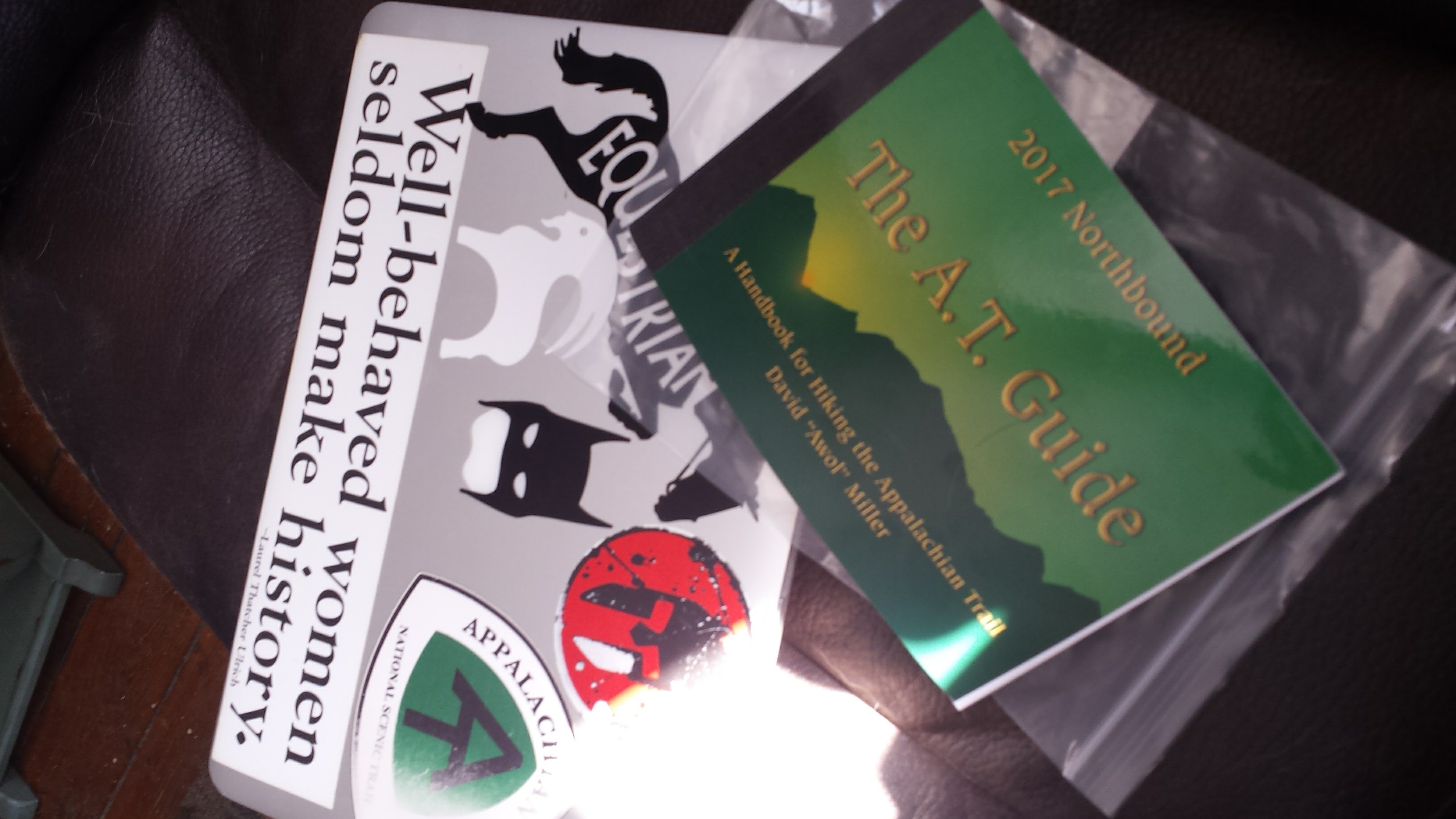 I switched my phone service to Verizon, as well. I was pretty dissatisfied with both my previous provider and the defective antenna in the current phone I had, which made the switch to the network most thrus recommend pretty easy (and why I chose to forgo a pre-paid type service). To cut costs, I swapped to an older model of a popular phone.

Remember when batteries weren’t built into a device? Yeah, I barely do either. But this phone came with a removable back panel and battery, and Amazon introduced me to something very beautiful: extended batteries. These are not charging cases or power banks, they’re literally a bigger, hardier battery for your phone. Sure, they add some bulk and a new, extended back panel for the phone, but many of the reviews toted up to 40 hours of use time. All it took was a little imagination about how far I could stretch that on airplane mode to prompt my purchase. I am going to start my hike with a power bank with every intention of being able to send it home and cut a good chunk of weight.

And of course, last but not least, I’ve taken my butt on a few shakedown hikes. The featured image for this article is from Ragged Mountain in Connecticut, and included one of my many goodbyes to friends.

There is nothing more beautiful in Walmart than the wall of Knorr pasta and rice sides. So many choices, so little time, and a couple disgruntled noises when I discovered the pesto takes something like 15 minutes to cook. Other important Walmart-safari notes: Lil’ Debbie oatmeal cookies have 330 calories in a single cookie (what even), and dried, salted carrot slices are even more delicious than expected.

I decided on four mail drops, based on this Trek post by Zach Davis, personal experience, and my desire to test my abilities and limits for resupply. My support group back home, though comprised mostly of three dogs, is trustworthy enough to put together more drops if I need them. In part, this is why I’ve concentrated my drops earlier on (and left my boxes untaped). My drops included the NOC, Fontana Village (I’ve sent about 4 days with some excess snacks, to either get me to Gatlinburg or be supplemented at Fontana to make it through the Smokies), Harpers Ferry (where I will also pick up the other half of my AWOL guide), and Monson, ME. I will also be closer to friends and family in the Northeast and don’t expect resupply to be in short supply.

In my gleeful packing of nearly unexpirable chicken packets, it occurred to me that their presence would probably be heavily eclipsed by tuna packets, and somewhere along my venture I may have to give up my life of refusing to eat seafood for some variety and protein. A second kick in the gut. First no pesto pasta, now tuna!???

This one is going to be hard to miss while chugging along with my trekking poles. Or holding my head in my hands asking myself why I thought this was a good idea. 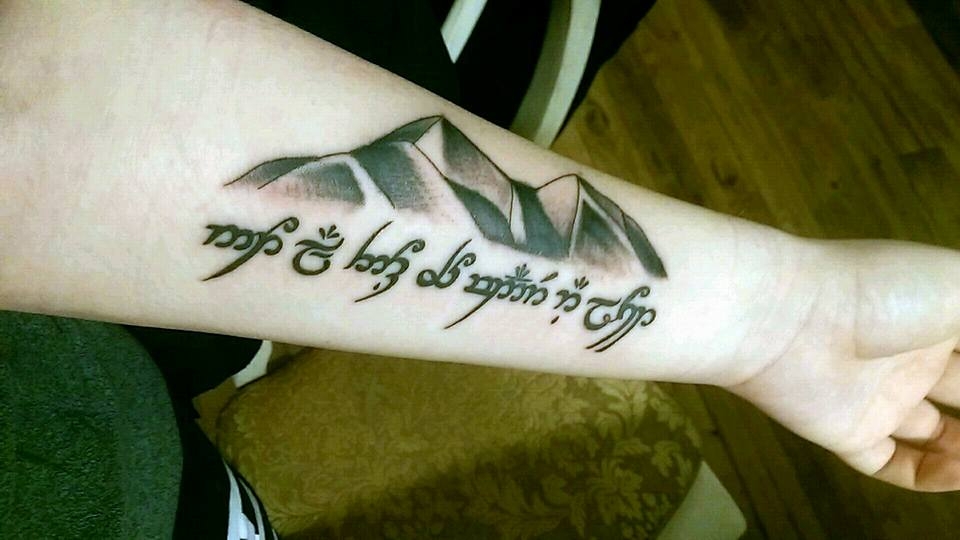 The script is Tengwar (Elvish), and is a famous and admittedly slightly cliche Tolkien quote, “not all those who wander are lost.” It highlights, for me, why I decided now was the right time for this hike and what this hike is about.

Do I advocate everyone gets a tattoo to bolster them on their hike? I don’t think I’m allowed to do that. Do I think it was a baller idea for me? Without a doubt, 11/10 decision. That said, the 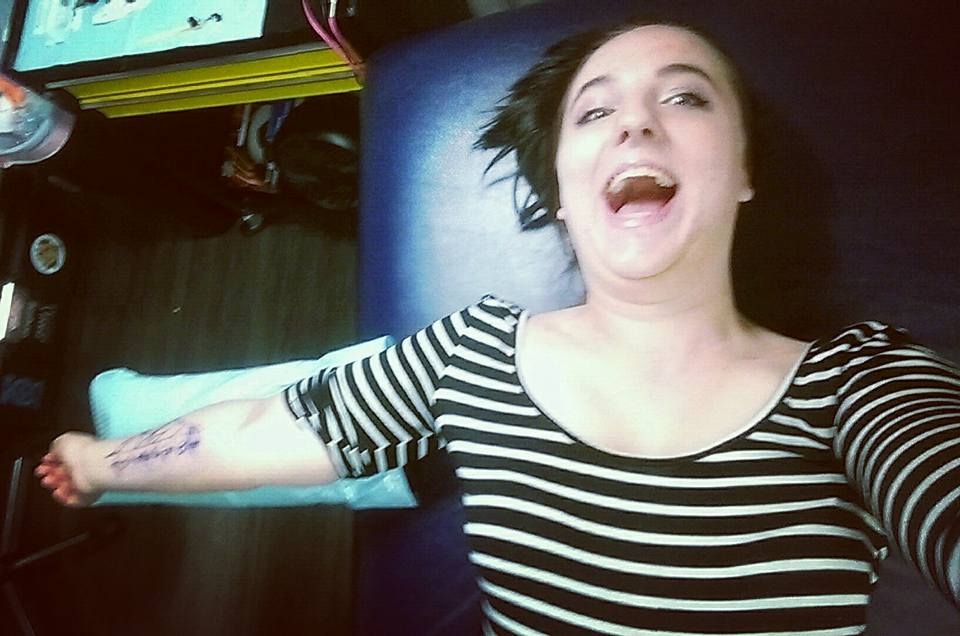 piece intentionally has no direct mention of the AT and thus, while I’ll be sad if I cannot make it to Katahdin, it will remain a beautifully done testament to my time out there rather than a sneer at my inability to finish. If (when) I finish, I will get “GA –> ME ’17” added along the mountains to signify my accomplishment — or another AT tattoo altogether.

Frankly, we can just call it a trial run of my masochism before entering the trail.

And the Hard Part: Goodbyes 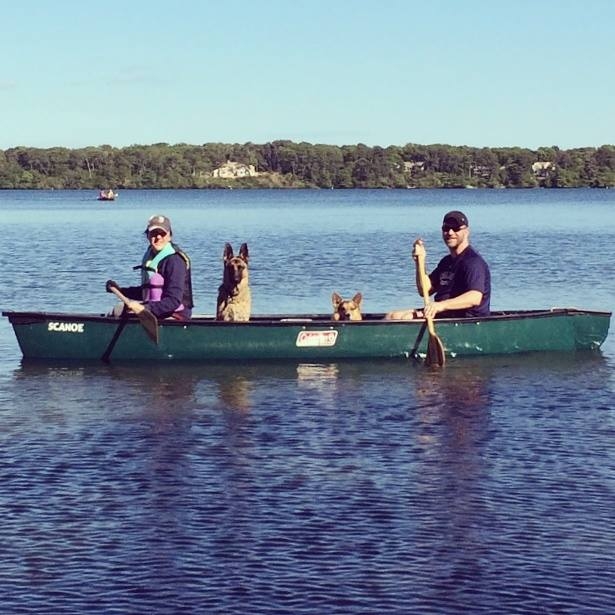 Summertime with my dad, corgi (Clover), and shepherd (Rhea)

My life has been scattered across a couple of different states and a fair number of different communities, and from this came a scattering of my friends. I’ve been making drives, planning dinners, and receiving a slew of support and people both saddened to see me disappear for six months and eager to follow my journey. There have been hugs, tears, and refusals to say goodbye. There has been quiet handholding, attempting to judge what things would look like in 6 months. Many of my friends are at equally climactic points in their lives, leaving a markedly high chance that opportunities arise that call for them elsewhere, and making these goodbyes that much more difficult to stomach knowing they might last for much longer than my thru-hike will take.

While I will certainly miss my people, I can communicate with them about my intentions to return, 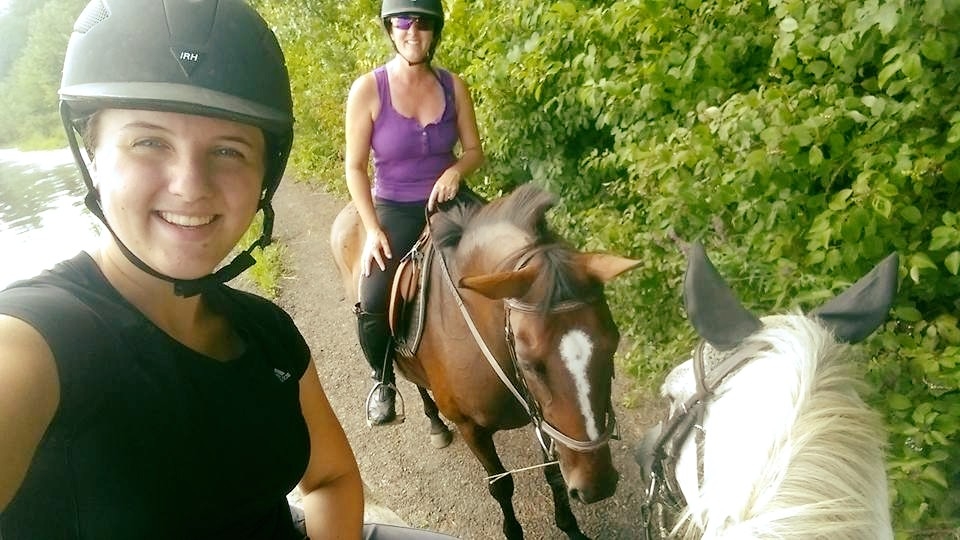 and I know I will stay in touch with many of them in the woods (an admittedly startling number of friends and family have asked to receive postcards from me, and a good handful are planning to do sections with me). I cannot do the same with the two cats, three dogs, and eight horses that make up an integral part of my life. It will be strange, at least for first couple of weeks, not waking up to a German Shepherd using me as her own personal heating pad.