I slept in the next morning with no major rush to leave. At 11, I finally made my way out the door after a little too much soda and Doritos (for some reason I had thought this was a good idea). The trail was gentle today but the sun was hot and the Doritos had given me a stomach ache. My legs felt like jelly on the smallest hills so I decided to camp early at Ore Hill Campsite with the motive of trying to meet the Omelet Man in the morning (his station was very close to the campsite). I ran into Kaleidoscope there who I hadn’t seen since Virginia. Another girl showed up and offered me cookie dough brownies (yum). I stayed up late chatting until it started getting dark and I hurried to get my bear bag hung and go to sleep.

I packed up quickly the next morning on omelet mission. I walked up to a large tarp set up with buckets hanging from the trees and folding chairs propped up against a table. There were water jugs there so I filled up with water and sat a little wondering when/if the Omelet man would arrive. In 20 minutes I saw him walking up the trail carrying some supplies. The Omelet Man’s name is Carl and he tries to come out and do trail magic every weekend and leave water during the week. He brings out boxes of eggs and makes Thru Hikers omelets and also had a supply of orange juice, muffins, cookies, and bananas. I was super impressed with his set up and my omelets turned out delicious. I hung out for awhile with some other hikers who’d shown up and then continued on. I discovered my mouth piece for my bite valve had fallen off so drinking water would become a little bit more difficult than I was used to. Mount Cube didn’t look threatening on the profile and it didn’t feel as bad as anything I’d climbed recently. Yet for some reason I dragged up it very slowly and at the top I felt weak and pathetic. What was wrong with me? Had the whites destroyed me? Why was I getting weaker? Would I ever go back to my old pace and actually get some miles in? A loud group of girls were yelling on top and I couldn’t help but glare at them even if they didn’t notice. I slowly descended the mountain and the rocks came back. I wasn’t going to make it to my planned destination but I’d at least get to the brook at the bottom of the mountain. Another couple was camping there I chatted while setting up and realizing I’d only eaten omelets over the whole day. Quickly I ate dinner, hung my bear bag over the bridge near by, and hoped that I’d feel stronger the next day. 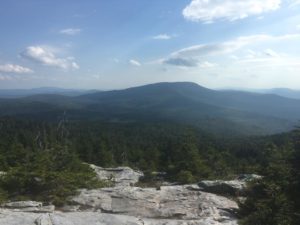 I didn’t feel stronger the next day but I felt motivated. I pushed up Smarts Mountain which had a fire tower on top. I climbed up to get fabulous views where I thought I could see the last white mountain in the background. Getting down smarts involved a lot of walking on slab rock and took awhile but I got some nice views on the way down. I ran into Wildfire at my lunch spot and pushed on to the top of some ledges where an older fellow was impressed by me and I couldn’t help but smile. I was told there was no camping below but a group of Dartmouth students said I could use some of their water from the jugs at the road below. I got to the road just short of 7:30 pm with day light leaving fast. I was able to find a flat spot and settle in fast after my first 13 mile day in what seemed like forever. I was excited because all I needed to do was another 13 miles and I’d be in Hanover New Hampshire the next day. 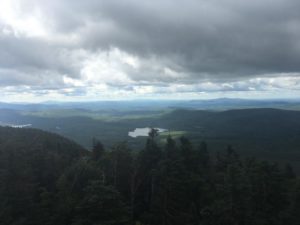 I ate an orange crush pop tart for a breakfast experiment the next morning and I highly recommend everyone to NOT get that flavor. I had one mountain to climb and then it would be smooth sailing to Hanover. Moose mountain was uneventful and I saw no moose (I still haven’t seen one unfortunately). There was a good view at the south peak and then I headed into a valley with a field where to my surprise ripe blackberries lined the edge of the trail. I feasted as I walked. The rest of the day was full of walking on soft trails of pine needles. It was luxury! I got to the edge of town planning on calling a trail angel but found a group of people camping in the forest just out of sight from the baseball field. I joined them and after seeing two boys carrying in a pack of Pbr I caved and set up my tent. When I was finished I asked if anyone would like to join me for Indian and three agreed (it’s a rare thing to have an Indian restaurant on the trail so I wasn’t going to pass on it). The food and the company where very good and it was easy walking back to our campsite at the end of it too!

That time I was Goldie Locks

I struggled to wake up the next morning and as I was packing I saw the familiar face of Earl Grey! We talked for awhile and I ended up helping myself to a breakfast beer. I was finally packed at 10 and headed off to the COOP. It was an awesome grocery store with bulk food bins and spices. I wandered around happily in it getting some spices, chocolate covered coffee beans, and more hummus. I wish there were more stores like this along the AT because I’ve been having my parents send me those things on the trail once in awhile. I grabbed some hot food there and then headed to the recreational building where I showered and did laundry. On my way out of town I stopped by the post office to pick up my new boots, inserts, and a new mouth piece. I was ready for business ! It was around 2 pm but I was finally leaving town with big miles still planned. I crossed the river and entered Vermont. It was a sweaty hot entrance that eliminated any good the shower had done immediately. I stopped by a deli in the next town to grab lunch and then continued on the trail which was still a road. I struggled up the hill and as the day became later I tried to reevaluate my plan but I stubbornly thought I could still make my destination. I was meeting Patrick the next day at a road crossing and I wanted to get as many miles out of my way so the next day would be doable. All my north bound friends had told me of this barn where a couple let you stay for free and had dinner if you showed up in time and made you breakfast the next day. I wouldn’t be there till 9 or 10 but the few people I ran into said that was ok and that the barn was always open and the couple stayed up late. So at 7:30 PM with 4 miles to go I turned on my headlamp and continued on my way. Night hiking isn’t my favorite but I wasn’t that spooked this time. I got to the road and followed the trail to the bridge where I was told to look back and find the blue barn with the AT logo on it. I spotted it but saw no sign of life from the barn or the porch of the house where the couple apparently hung out. Out of options, I walked around the barn and found steps leading up to a room with 6 mattresses set up, a huge dvd collection, and a power strip. It looked like a hiker room for sure. No one was there and it was eerie so I called my mom who told me to go to bed as soon as possible so no one would realize I was there. I picked a bed and as I went to sleep I felt like Goldie Locks from the “Three Bears”. 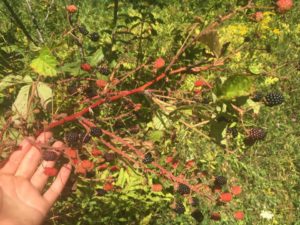 I slept in the next morning and then ate some granola and packed up. No one was on the porch still as I left except a dog that barked at me. I hadn’t found a hikers book so I couldn’t write a thank you and I felt bad and sketchy but I don’t know what else I could of done that night. I just walked on and tried to push the memory away. My legs felt like jello and I was struggling on every little hill which upset me for awhile until I realized I had until 9:30 to hike. I walked through more fields full of blackberries and helped myself to more than a few handfuls. It was a very hilly day of hiking but I made progress. The last two hills really wore on me but the motivation of seeing Pat and having three zeros kept me going. I brought my headlight out coming down the last hill making this my second night hiking in a row. When I got down the hill I found the AT parking lot hidden on the side of route 12. I cooked ramen while waiting for Pat and when he showed up he told me he’d passed by three times even with the coordinates. I threw my pack in the car and he drove me to Applebee’s for a late night dinner and then to the hotel for showers and sleep. What followed was a beautiful Labor Day weekend camping at Gifford State Park (20 miles ahead on the trail). We explored, ate a lot, read the new Harry Potter Book, and made some awesome fires. I’ll pick up where I left off in the next blog 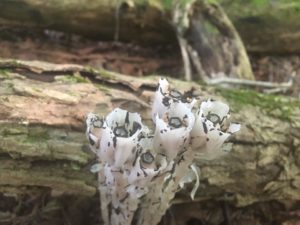