Wow, I’m finally here, starting the Appalachian Trail! It is so exciting and a little hard to believe after months of planning and training.

Will and I flew into Georgia to stay with friends who live in Cummings. He is accompanying me for two days. Afterwards I will continue on solo, though I have a couple friends who plan to join me for six day stretches.

Our friend Aly drove us to Amicalola Falls State Park on a beautiful sunny day. We went to the visitor center so I could get my ATC tag (#2717) and weigh my pack. My base weight is 20 pounds and with six days food and one liter of water, the max I plan to carry, it will be ~32 pounds. After the weigh-in we sat for a talk by an ATC volunteer, he went over leave no trace principles and urged shelter to shelter camping & privy use as 4,000+ people are expected to hike the trail this year. We took the obligatory arch pictures before heading out on the 8.5 mile approach trail to Springer Mountain.

The falls are a beautiful series of cascades, well worth the 600 step climb. Platforms allow viewing from the bottom and from 175 steps up. The falls are a portion of the 2,000 ft. climb the approach trail takes to reach Springer’s summit. The Appalachian Trail Conservancy (ATC) recommends this route to reduce wear on the dirt roads used to access the small summit parking area. Personally I enjoyed the journey, it felt like a preview for what is to come on the trail.

At the top of Springer, I signed the logbook and we admired two plaques, from 1934 & 1993, embedded in the rock. The terrain was rolling for the rest of the day with numerous streams. We passed a couple of shelters and set up our tent at Hawk Mountain Campsite. The site has thirty tent pads, but we saw only three other tents. It felt luxurious, there was a privy nearby and we had a bear box all to ourselves. We ate spicy peanut ramen for dinner. Then Will & I competed to see who could better disperse their toothpaste. He won hands down, spraying out a fine cloud while mine made a dribble line. It was chilly out so we ended the evening with a game of spicy Farkle. I was ahead by 10,000 points until Will made a big comeback and won. 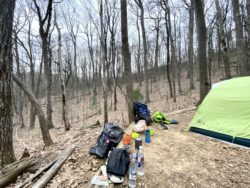 Prior to the trail I had four days of early wake-ups so it felt great to sleep in. For breakfast, I excitedly dug into Walnut Date oats while Will had Cherry Pecan. We were soon on the trail; birds sang in the trees and plants thrust green shoots through last year’s dead leaves. It is definitely spring here in Georgia. Most of the trees are deciduous and currently leafless, allowing for views of rolling tree covered hills in the distance.

Shortly after lunch we came across jugs of water clustered by a cooler full of trash. A family offered to cook us a hot meal. We were full and declined, but I was excited for this first glimpse of trail magic!

We reached Woody Gap in the mid-afternoon and picked a campsite far up the hill from the highway. (By the way, a gap is what we call a saddle or pass in the west.) The Gap has two poke stops and a gym so we played Pokémon Go for an hour after dinner. Each of us caught a Tapu Bulu in a remote raid. It’s neat that so far the trail has shown up within the game, which I wasn’t expecting. We turned the gym yellow before heading to bed.

Upon waking, Will & I quickly packed our gear then headed downhill to the picnic tables near the Woody Gap’s restroom. Aly arrived shortly after 8 am and brought us yummy GF chocolate oat cookies! Also wet wipes as I miscalculated how many I needed until my resupply. While the three of us were hanging out an AT trail ambassador wandered by. She knew the name of this cool purple flower I’ve been seeing alongside the trail. It’s called Trillium and apparently comes in three colors. (Spoiler: I see the yellow variety later in the day.) After breakfast Will and I said our goodbyes then he and Aly took off. 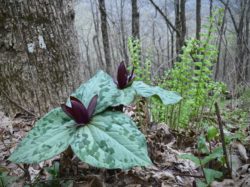 The morning was a bit of a struggle. I couldn’t capture a sense of awe and my stomach was upset. Still I walked in silence, determined to spend my first day solo without audio distractions. Then I met a guy named Brave Bird. By lunchtime I was on Blood Mountain summit; Georgia’s high point on the AT. There is a really cool shelter on top that is built from stone and contains two large rooms. I was excited to try my cheesy broccoli quinoa meal. It was delicious!

I intended to camp on the ridge top, but the weather report warned of thunderstorms and rain so I camped at Baggs Creek Gap. Despite my early struggles, I put in a 15 mile day. There were fours others at the site; I met Highlander, Psyched, and Ira. Since it was really windy, I eyed the trees carefully before placing my tent next to two sturdy ones. I had trouble falling asleep so I put in ear plugs.