First few days on the trail

Everything went as planned for my first morning on the trail.  My parents hiked a mile to Springer with me and a mile back to the car.  Then I was on my way.  Well… Not really.  I hugged them goodbye and right when I was about to shed a tear, this kid came up offering me trail magic.  There was some confusion, my parents walked away, I turned the trail magic down, felt like the biggest jerk in the world and grabbed a honey bun to go.  But for the record, I appreciated the trail magic and would NEVER EVER turn it down again.  Around mile 7, I came across more trail magic!  This time from The Georgia Adventurer’s Group.  I grabbed an orange, some chai tea, and a jolly rancher. The hiker hunger hasn’t set in yet, but the trail magic was still awesome. Thank you so much to Kaylan and the Georgia Adventurer’s Group for the trail magic! I can’t think of a better way to start off my hike.  I reached Hawk Mountain Shelter around 6:30, which was way later than I thought I would get there. Hiking with a 30-35 pound pack is no joke. There were probably around 30 hikers or more camped around the shelter.  I enjoyed hanging out with other hikers by the fire and went to bed around 9:00. 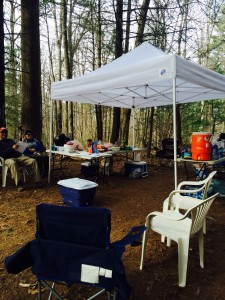 I woke up around 5am on this morning, started packing up and was up and running by 6:00. I thought the sun would come out at like 6:30. This is not the case. It actually doesn’t come out until around 7:15, so I hiked in the dark, went the wrong way and then turned around. It was cool seeing the sun rise. The picture I have really doesn’t do it justice. About a mile in I met Bamboo at a road crossing.  He’s with a group of like 15 disciples or something that will be hiking and preaching and doing trail magic all the way to Maine.  They have vans that will meet them at road crossings.  If trail magic wants to walk with me to Maine, I’m all for it.  I arrived at the shelter around 12:30 and thought about going further but I got cold and decided to stay the night there. Good thing I did because it absolutely poured. And it continued for like 11 hours straight. There were about 30 people in and around the shelter. Maybe more.  I slept in the shelter with 13 other people.  Appalachian Trials blogger Kayla and her boyfriend Noah were on the upper level.  They are so cute with their Tennessee accents.  I also met Appalachian Trials Blogger Brittany and her Beaglebagel, Scout. 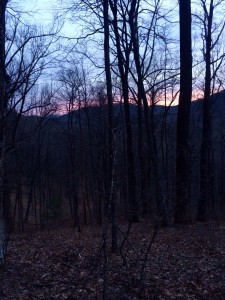 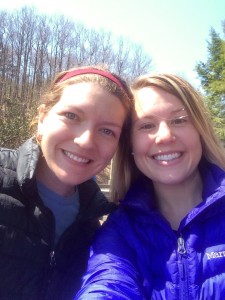 It was cold and rainy, so most people who stayed in the shelter decided to keep their spots and take a zero day. There were no shelters up ahead, so staying there was a better option than camping. What does one do during a zero rainy day at the shelter? Play Yahtzee, cook, eat, cleanup, get in the sleeping bag to stay warm, make a fire when it’s not raining, watch people hiking in the rain come through, watch people who’s stuff is wet try to dry it when the rain breaks, cook, eat, clean up again, and just sit around and chat. 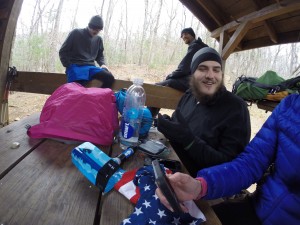 Sean taught me how to use my GoPro. That’s Ken in the background with the mustache and hat with Walter White.

When I woke up, there were Heineken cans on the picnic table about 5 feet from where we were all sleeping.  Apparently some guy rolled in around 2am, drank a few beers, and left before we woke up.  This is creepy for a few reasons.  We all went to bed at 9:00, he sat in the dark and drank beer by himself, and backpackers don’t usually carry beer so I’m thinking he wasn’t a hiker.  The only reason anyone knew he came is because Walter White  (trail name. He looks so much like Walt. It’s awesome.) woke up around 3:00 to the sound of the beer can tab popping and saw the guy sitting there.  After I left the shelter that morning, I passed a guy with pig tail braids and a hiking skirt. He said “Hey! Are you having fun yet!?” I said yes and he said “Cool, Happy Trails!” The people out here are great.  I arrived at Lance Creek Campground in the afternoon where I met up with the crew.  The crew consists of Ken and his little brother, Sean. Ken is 30 and has lots of tattoos. I didn’t see them at first and then it was like surprise! Tattoos everywhere. He’s cool and quiet and his little brother drives him crazy. They argue and it’s quite entertaining. Sean is 20. He’s loud and pretty funny and has a lot of tattoos too. Ken tends to stand behind Sean and Sean yells things like “Yo, why are you always so creepy bro? You’re always creepin’ behind me.” People ask  if Sean and I are dating or if we are brother and sister a lot because we argue all the time too. We just argued about taco sauce a few minutes ago. It’s not the same as salsa.  Then there’s Tony. He’s the man. He’s a retired philosophy professor and he’s hilarious. It’s a funky bunch, but we get along and we hike the same miles so it works out wonderfully.  We hike separately but cross paths and meet each other at the end of the day. 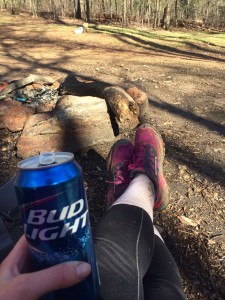 Finally made it to Neels Gap. I expected to be here 2 days ago but the zero day and the bear canister rule slowed me down. There is a 6 mile or so stretch of trail where a bear canister is required for camping. I don’t have one, so I couldn’t camp there. I had to do weird miles because of this. I only brought food for 2 and a half days, but I got lucky with the trail magic that first days, and people who packed too much tried to get rid of their food so I did alright. I ended up having salmon and chocolate for breakfast this morning. It was all I had left. But Ken was nice enough to give me a cliff bar and some peanut butter crackers and that was the best gift ever! Today was a great day over Blood Mountain.  Words can’t explain the view and again, the picture doesn’t do it justice.  I don’t think I have ever seen anything like it.  The hike was pretty good except for the last 2 miles. The mile uphill was tough and the mile downhill was steep. The uphills are hard for your muscles, the downhills are hard on your joints.  Around mile 6, I realized I had been hiking with a pair of underwear bunched up around my knee under my leggings all day.  What a dork.  Currently, I’m at the Mountain Crossings Hostel in Neels Gap. Still in Georgia. I’m loving it out here! I thought not showering was going to kill me but I’m not really bothered by it. With the open air, I don’t smell myself, and I just cover my hair with a bandana and I feel pretty darn good about it. 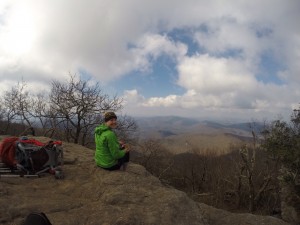 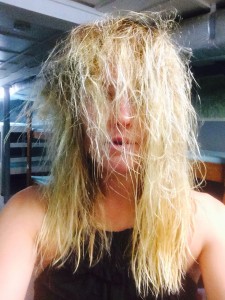 Life without conditioner is rough

It’s 8:15am and I’m hanging out at Neels Gap finishing this post before I leave. I woke up this morning and my head wasn’t on my pillow, so I went to pull my pillow closer and it was covered in fur and it was alive. “What the f*%#”.  I had a small moment of panic but then I realized it was just my hostel kitty friend I was taking selfies with yesterday. Hostel Kitty somehow snuck into the hostel and then into the bedroom part of the hostel and onto my bed. I’m pretty sure Hostel Kitty threw up on the couch and then came in and licked my face. I’m not mad. 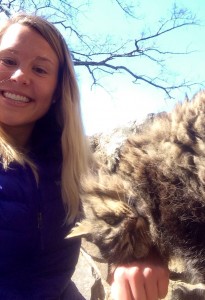