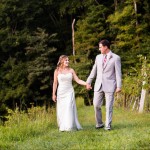 Our First Taste of the Appalachian Trail: Visiting Grayson Highlands

The emotions were overwhelming that day: excitement, anticipation, fear, uncertainty.

We were going to see a part of the Appalachian Trail that a lot of thru-hikers rave about. This is the first time we’ve been able to venture more than 2 hours outside of Raleigh, North Carolina since deciding we wanted to thru-hike the Appalachian Trail. What if one of us decides we don’t like it, and our entire plan gets disconcerted? But more importantly, what if this tornado watch in effect for our area gives us the worst weather ever?

There was a death in Taylor’s family and we had to take a couple days off to venture to the mountains of Virginia for the funeral. Our job schedules never give us more than 18 hours together, making it very difficult to leave town unless we use our very limited number of vacation days. Although the circumstances were sad, we really wanted to take advantage of our time together during the trip. We decided to stop and do a very short trail in Grayson Highlands on our way home.

As we left the tiny mountain town of Lebanon, Virginia, we made our way towards Grayson Highlands. It was later than we had planned on leaving, but we were determined to do this hike. We knew rain was in the forecast for the entire day, but we weren’t going to let rain stop us. When we’re thru-hiking the AT we won’t be able to escape the rain. Why let it stop us now? In fact, I was almost glad for the opportunity to get a better idea of how it feels to hike in the rain. Plus we could put our rather expensive rain jackets to the test! What we weren’t prepared for was tornadoes.

AT WHAT POINT DO WE CALL QUITS?

Shortly after hitting the road, the radio announcer started reading a weather statement for tornado warnings in the area. We weren’t really listening that closely until she gasped, then said, “Oh, the lights just flickered there a little bit.” Taylor and I looked at each other wide-eyed. That’s unusual to hear on the radio. She continues reading the warning for a few more seconds then it stops altogether. Moments later we hear her saying, “Oh, I think I got you guys back now. Goodness. We’re losing our signal. This has never happened before. It’s kind of exciting.” At this point, I start to get a little nervous. Back home, it’s not uncommon to get tornado warnings in the spring, but we often don’t even see a thunderstorm during the warning period. I have to admit, hearing ‘tornado warning’ doesn’t really get me too alarmed anymore…unless the radio announcer is alarmed. Then I’m definitely a little alarmed. But I didn’t say anything because I really wanted to go on this hike!

We turned off the main road and started winding up and down the skinny mountain roads that drop off to your death just a few feet to your right. It was raining off and on, and there was so much fog. We hit a stretch of road that was just completely white all around us. We couldn’t see more than 20 feet in any direction. That means we couldn’t see if there was a huge drop off on either side of the car. Did I mention I’m a little scared of heights? Well, let me tell you, I was scared then. At this point I said, “It didn’t occur to me that in order to hike in the rain, we’d have to drive these roads in the rain too.” But we were both committed, and we knew it. Just to reassure us, the clouds were kind enough to clear out as we hit an open valley and provide us a beautiful view of the mountains towering ahead, sprawling in both directions. It was so beautiful. We will be hiking atop those mountains in less than a year. My fear quickly changed back to excitement. 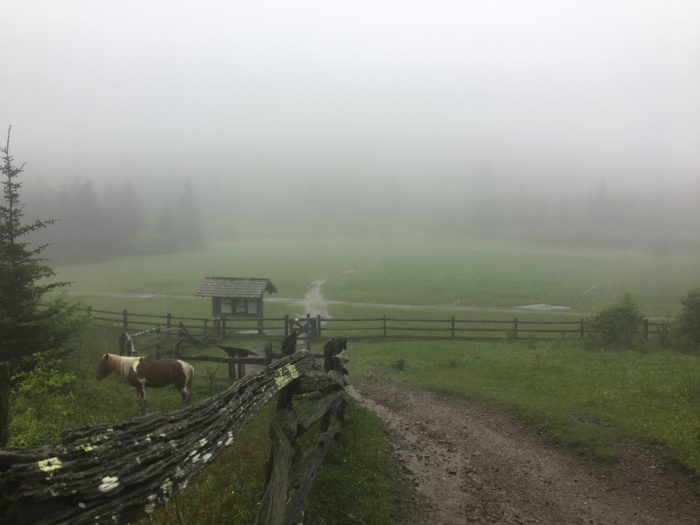 We finally arrived at Grayson Highlands State Park and it was pouring. We were both like giddy kids in a candy store. We got out of the car and while we were getting our stuff together, some hikers came by and asked us for directions to the campground. After they left, we looked at each other and Taylor said, “I think those were thru-hikers!” We met real life thru-hikers!  Although, I don’t think we gave them very good directions. We couldn’t even figure out where we were supposed to go. The map indicated three trailheads in the parking lot, but we only saw two, and one of them wasn’t even marked with either trail name we saw on the map. We wandered in the parking lot for a few minutes before deciding to try the unknown trail. Right before we stepped on the trail, I turned around and said, “We’re definitely doing this?” Taylor nodded his head and off we went. I have to admit I was still a little nervous that one of us would be so miserable after this dreary hike that we would reconsider if we were really ready to commit to the Appalachian Trail next year.

WHERE IS THE WHITE BLAZE?! 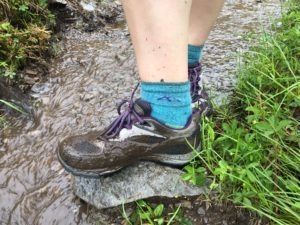 We started up the trail that was looking more and more like a creek. Our feet got completely swallowed by the mud if we stepped in the wrong spot, and we still weren’t seeing any kind of signs or markings indicating if we were going in the right direction. After about 7 minutes the trail opened to a huge field with benches, and signs, and roads. Ahead was a wooden fence and a covered sign that looked like it had a map.

It was so foggy, we could really only see shapes in the distance. As we approached the sign, we realized there were ponies on the other side of the fence! That’s where we were going! A small sign at the gate entrance warned that the ponies are wild and can bite and kick. We looked up from the sign and saw that there were four ponies completely blocking the trail. How are we supposed to get past these biting, kicking ponies? There was a guy on the other side of the ponies who seemed to be thinking the same thing. He just stood there and watched while we tried to cautiously maneuver around them. I now think the guy was probably just amused because the ponies were clearly quite mellow. 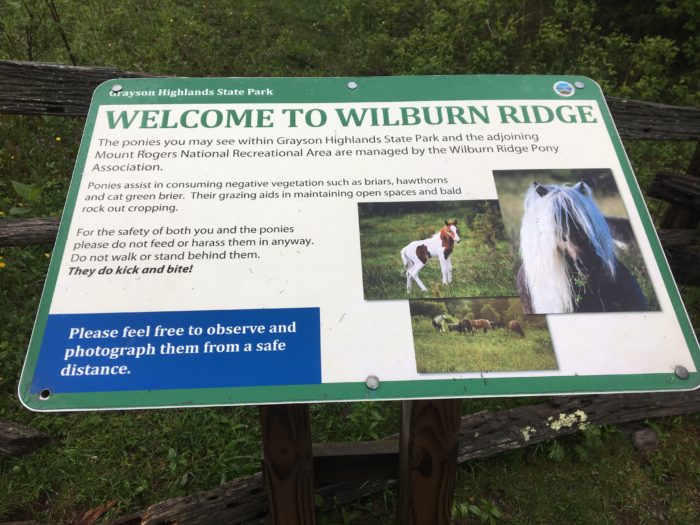 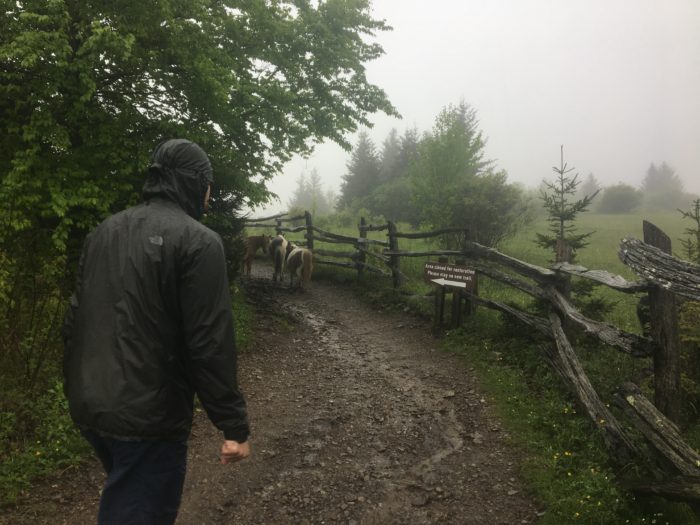 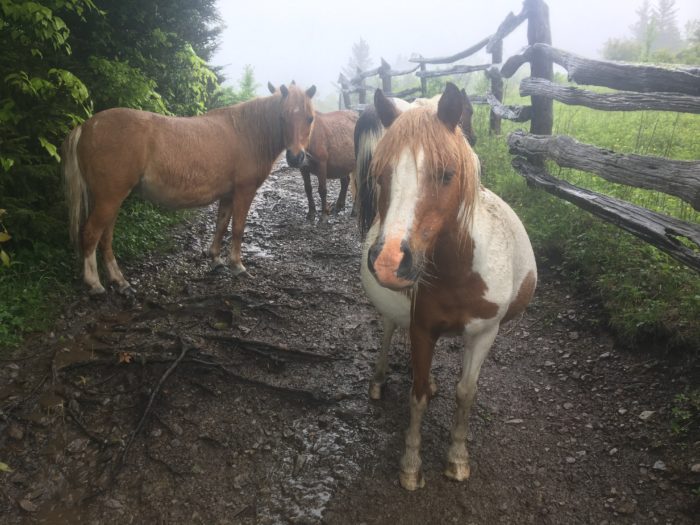 After we passed the ponies I couldn’t help but think that we weren’t going to find anything much more exciting. I was so wrong. When we saw a sign for the Appalachian Trail with a hiker passing by, we were both ecstatic! We took a bunch of pictures and dreamed of just heading north on the trail, buying our stuff at the next stop, and calling home to say we wouldn’t be back for a few months. We followed the trail for a little bit through the park back towards our car, pointing out the white blazes as we went. This experience truly sealed the deal for me. We could obviously get past the miserable weather and still enjoy ourselves. We just had to wait nine months to begin living in the woods as we journey towards Katahdin, Maine! 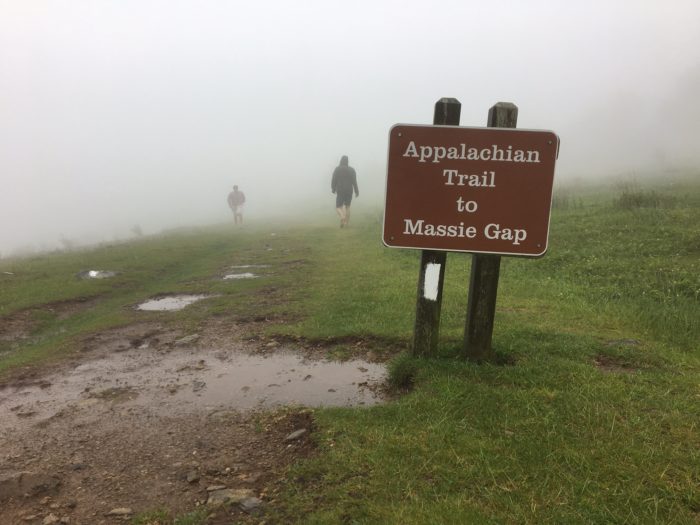 We're the Swords and we are starting our northbound thru-hike of the AT on March 19! We're in our late 20’s and since we met in high school we've been doing life by the books-graduating high school, going to college, getting a job, getting married. We've really been very fortunate so far, but the problem is that we love the outdoors and traveling, and our current jobs have really limited our ability to enjoy those things. We’re planning on making big changes in our lives, and we’re using this hike to kick start a new lifestyle. Hopefully, it will lead us to great things!