Hi everyone!  I am in Franklin, North Carolina!  I thought I would be updating before this, but the Internet was so bad at the first hostel I stayed at, I couldn’t even access the page. Best laid plans, right?  So here is a belated first post of the first five days of my hike. Everything has been amazing so far!  I am having so much fun and I can’t believe how lucky I am to be doing this.  I will upload the rest of the first two weeks as soon as I can and I promise I’ll keep up better than this in the future.

My dad and I drove down to Georgia and stayed the night in Gainesville before driving to the Visitor’s Center at Amicalola Falls State Park.  I checked in with Clarity at the center, got a photo with Noah at the front of the arch, and said goodbye to my dad before heading up the trail.It was a slow day of hiking. I’d been running before I came down, trying to get in shape, but I was not prepared. The state park is beautiful, but the stairs are not a joke. I didn’t realize that they are metal grates, and they were really hard on Noah’s paws; I thought I was going to have to carry him up the last hundred.  We took a rest at the top, and then started up the approach trail. We took it slow, resting a lot and chatting with day hikers, and finally made it up to Springer Mountain in the late afternoon. There was a huge crowd there, and the noise was intense, so I decided to keep going to the next shelter. I signed the log book, but didn’t get to take a picture of the stone because it was covered in section hikers.  I got to Stover Creek Shelter, said hello to the other hikers, set up my tent, checked Noah’s pads, and was out pretty much immediately, too tired to even eat.  First lesson learned: don’t worry about asking people to shove over so you can get a picture, otherwise you’re going to lose the opportunity.

When I woke up, it took me over an hour to force myself to eat breakfast. Noah was very stiff and tired, and I was worried about him, and still too tired to be hungry. I got packed up and out of camp after everyone else left, and decided to cut a long day into two shorter days. It wasn’t a bad hike, but I carried Noah’s pack for him all day and that brought my total weight up to about 54lbs. It was a hard haul up those hills, let me tell you. I still rolled into Hawk Mountain Shelter around 3pm. There was a young couple from Canada sitting in the shelter who had passed me earlier on, and while I was talking to them, a man named Chris came in and sat down, joining the conversation. A young woman was floating around in the background doing her own thing. I didn’t know it yet, but those four people, Tom, Robyn, Chris, and Aly, would become my trail family.

I’m still having trouble making myself eat, because I feel so queasy every day. Sassafrass and Justus mountains were super tough. I carried Noah’s pack for him again for most of the uphills.  Spent some of the day hiking with a guy named Hawk who is doing a six day shake-down hike in preparation for his own thru next year, wonderful guy from Michigan, as well as a younger guy named Daniel.  By the time we all got to Gooch, I was too tired to sign the log. 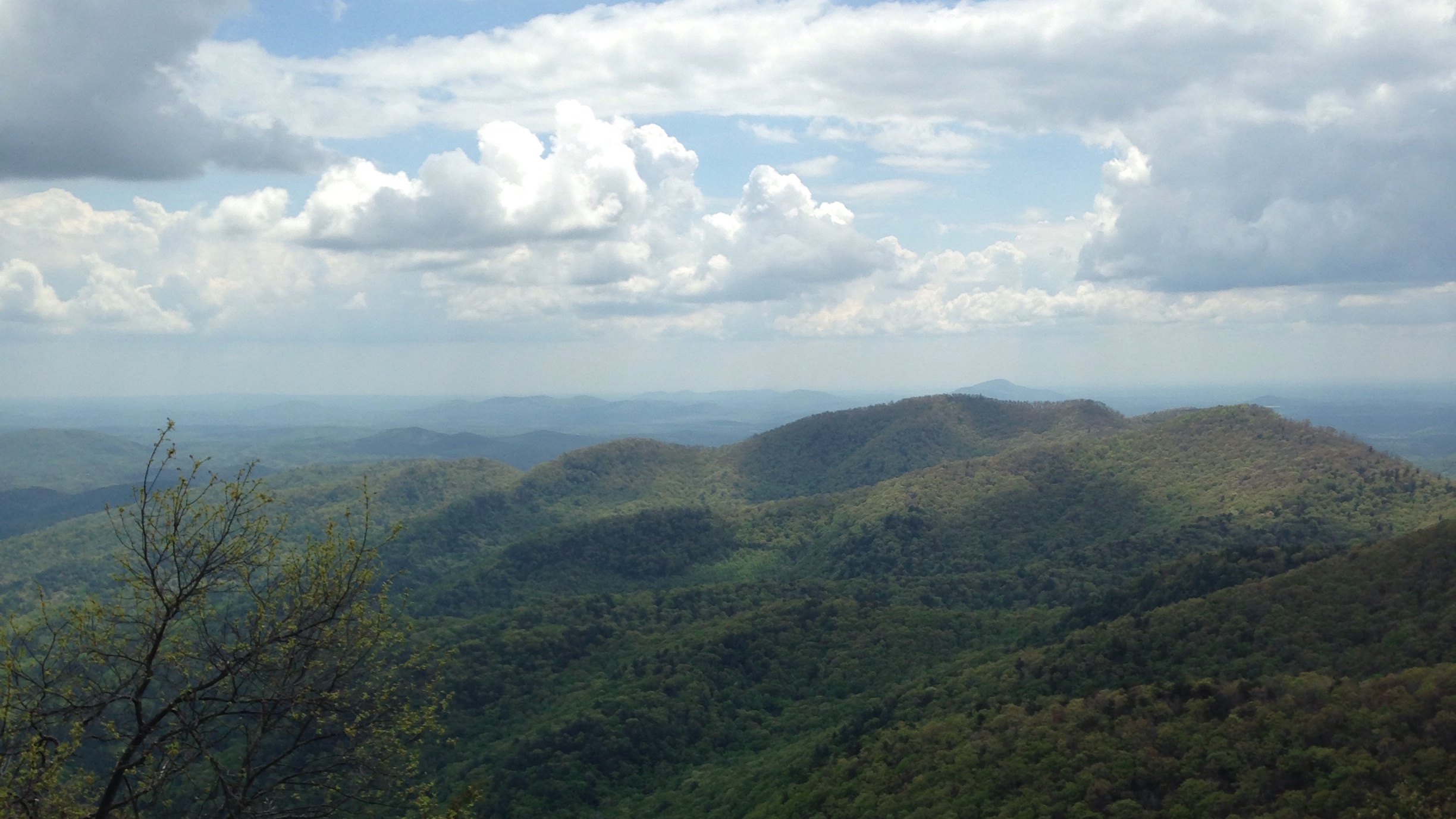 Great views on this day!  Noah and I were both feeling stronger on the hike today. I’m resigned to carrying all his food, but he carried his water all day today and did all right. Still hiking with the same crew. I rarely see them during the day but we all meet up in camp at night. We all compared notes at Lance Creek and everyone was feeling pretty peppy, but Blood Mountain is tomorrow, so we’re taking it easy. Noah ate a ton today, and his paws are looking better as well. He has two rubs on his front paws that are tender at the end of the days, and I’m keeping a hard eye on those, wrapping his paws as necessary. I gave up keeping him on the leash today and we’re both much happier. 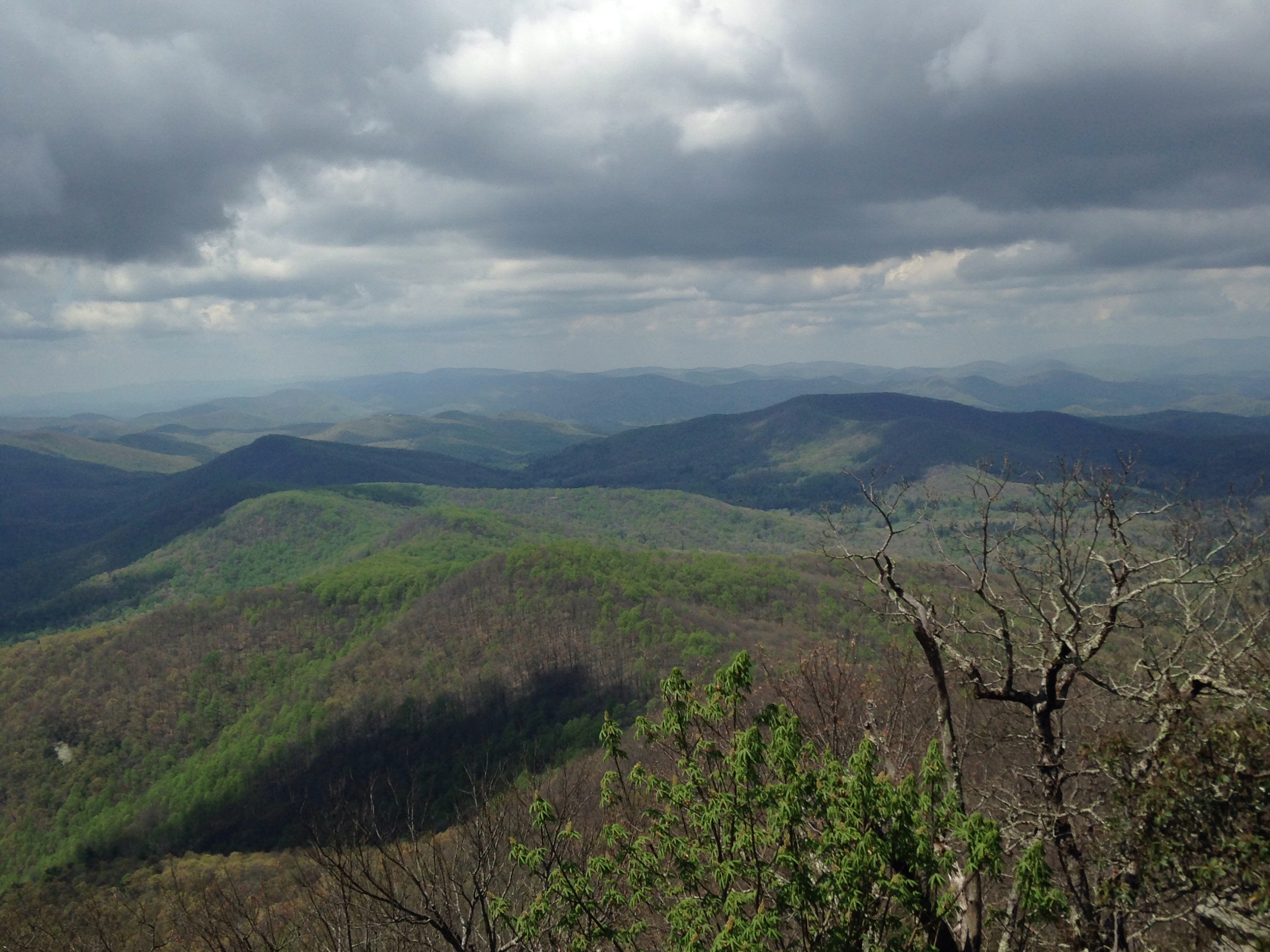 Got over Blood Mountain just fine.

The stairs at Blood Mountain are rough!  All the effort that went into building them and I do not appreciate it. At.  All.  There’s a beautiful stone cabin at the top, and a huge boulder you can scramble up for some great views. I talked with some day hikers who were so impressed at the idea of an attempted thru.  Reminds me of myself a year ago!  After Blood we hiked down to Mountain Crossings outfitters at Neel’s Gap, well known for the tree in front that is decorated with hundreds of pairs of hiker shoes, thrown into the branches by hikers who packed it in after Blood Mountain. I picked up a little extra dog food for Noah, some oranges (a craving that has not left me since day one), and a root beer. Tom, Robyn, Chris, and Aly all got a cabin in town while I hiked on to Bull Gap with Hawk and Daniel.  I threw my first bear bag, and it only took about a million tries before I got it right. I spent most of the night awake, watching mice run up and down the mesh inner wall of my tent like it was a trampoline.  I felt tired, and Noah is exhausted every day, but like Chris says…there is not one day that I would give back yet. Not one. Every second has been amazing.

In the next update: my new trail name, the perils of hostels, and leaving Georgia behind. Happy trails everyone!