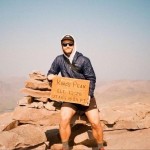 Fishbowls and Forest Fires: Reflections from Around Mile 500 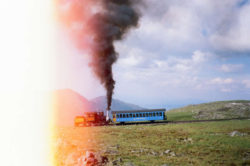 In middle school I used to fish. It wasn’t anything fancy, until it was. Like most of my pursuits I became slightly obsessed, going through brief phases, and even getting a fish tank. One black and one white and orange gold fish. An ash-ridden, plastic log instead of a thrifted coffee table rested in their home. And despite trying to make it a comfortable, aquatic, humble abode, there’s that urge jutting from the fingertip to tap the glass. It’s mean. It’s horrifying. So, I used to imagine myself in their water. Not scared of breathing, but instead watching the top swirl and move over like a stream of consciousness.

Hiking produces similar streams: squirrel-like attention spans sometimes too. You’re zoned in all the same though. With four walls of glass around you, nothing seems real. Just what’s under your feet and farm stand pie in your belly from Vermont Route 12. Step. Crunch. Walk. Do I have to pee?

Filtering water always makes me have to pee. Bending past the wooden-warlocks (I mean trees) with a large water carry from Winturi Shelter, I reminisced on the watery thoughts in my mind. I turned a corner though. Tap, thud, crack. 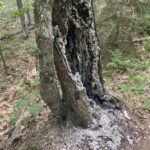 We smelled it first. The smoke was pungent and crawling up the bark, but the real damage was done on it’s internal structure. I recalled in elementary school we learned that first people used to hollow out trees for canoes by burning the inside of the trees out. Who is making a five foot canoe on the side of the trail though?

Homework and I examined the situation, noting spitting and eager flames on the side, leg hairs fearing the warmth, and knowing that this needed addressing. This is how forest fires start.

It didn’t take long, obviously. To decide to dump the water carry from the shelter. It needed to be done. It wasn’t enough though. On our toes, we relieved the stress of the situation by relieving ourselves one at a time.

It still wasn’t enough though. The coals just kept interrupting my nerves with warm pops.

Utilizing a gripping bar from AT&T, Homework called 911 not knowing who to call. GPS coordinates were then given. Instructions to head back to the intersection of the shelter and trail were then recommended. 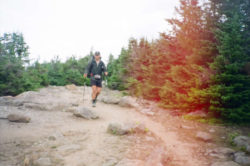 Thus, we headed back. We were northbound now I guess.

“That really took the wind out of my sails,” Homework projected over his shoulders.

Same here. I hadn’t taken into consideration the outside world for about 500 miles honestly. Escapism is a common headspace in the trail’s early miles. The mind detoxes from club lights, car stereos, and awful, but needed, news. It’s in those miles where the thinking is done.

What do I do after trail? How can I keep doing this? I like being alone. Is that bad?

Whenever I do think of the future it is naturally in the context of pre-trail. Pre-trail was a kaleidoscope of self-hate and recovering. There were lots of colors though.

For example, in my senior year of high school a middle schooler got shot in my district, but lived. There was then a secondary bomb threat on my high school. Not knowing it was a bomb threat, we thought it was another shooting. The teachers put us all in the science storage closet, tying the door shut with an extension chord. We pleaded with her not to open the door when we heard a knock. If it was the SWAT they could bust in, and sure enough, they did. The shovel I was gripping was silly looking back now, but at the time I felt comforted. No finals either that year. Hell ya? Moving with the media, my mind sprinted onto the next thing: college.

“I’m a designer,” I would tell myself in undergraduate.

I design bags and stories. Staying up late to finish projects was the norm, but COVID made it difficult. Motivation lacked alongside self-care to the point where starting anything seemed like a 4K. Ah! There’s that trail metaphor. They got done all the same though. Project after project piled up on the shelf, but self-actualization and pride began to lose their strength after completion. How come?

I turned back to running like I did in high school. To feel sweat drip leads work to be seen as easier. Gratification is easier in the similar vein that having a hike to do everyday is. Avoiding my internal dialogue once again though, I remained incredibly sociable and un-rested. This, combined with a poor base training to lend hand, led to an unknown stress fracture in my foot. By October the unknown was full-blown, and surgery happened in December of that year. 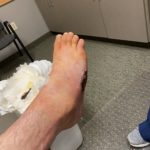 I dreamed a lot post-op. When my foot was a burrito, coyotes and jack rabbits painted and speckled dry, purple, landscapes, within the feathered confines of my pillow-thoughts. They danced and I began to smile with my eyes closed: self-inflicted happiness. It was much like my injury. I then doubled down on idealism and healing. After all, the Appalachian Trail is this for many people.

I am around mile 500 now. Sitting in a coffee shop, visiting a torn-dollar college friend, and resting an achy hip in Burlington, Vermont. It’s a wonderfully blended space. Even so, I am antsy for the trail. I am antsy for the routine and simplicity. However, I realize now more than ever escapism is more of a selfish endeavor than the trail itself. 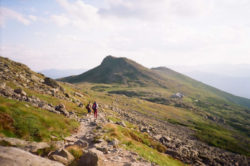 We have all been given the confines of society. I have been stamped with black ink on my forehead: a hippie, granola, hopeful, communist, but the black ink on my shoulder is just for me and my memories of four years out west.

With the ink already dry before trail I have realized that no spiritual and eye-opening thing has to happen in the woods. It’s not like that for everybody. These colonizer ideals of conquest and calling Mt. Washington a, “beast,” are awfully played out. The metaphors are too easy to grasp. So I implore hikers to consider that this is just what we must be doing. Hiking and walking is an animalistic and sacred ritual to be given thanks to. Not a leap to the top, but the tiny steps needed to undoubtedly be the best and nicest capitalist you can be in a capitalistic world. So, ya know, shout-out Mother Nature.

How can I keep doing this forever?

Heyo! My name is Nash Calvin. I am headed south on the Appalachian Trail this year. My spirit animal is probably a jackrabbit or a sea otter. I design things and write things in my free time. Stoked to walk for awhile!