The flapjacks at Harrison’s were amazing. For a meager $12 I got stack of pancakes, breakfast sausage, scrambled eggs, and a bowl of fruit. And not to mention a refreshing glass of orange juice. It was an honor to sit inside Tim Harrison’s quaint cabin in this part of Maine. A lot of history and a lot of thru hikers have sat in these chairs and it was a unique experience to add to it all. Margarita and I were joined with three other hikers for breakfast, and we traded stories of the trail around the breakfast table. There was a man I met at breakfast who actually thru hiked in 1978 (I believe). Amazingly, he told us that he ate breakfast here as a teenager all those years back. Even more amazing, Tim Harrison, who was the same man who served him back in 1978, still had the hiker log from that year. The man at the table pinpointed to us his name that he wrote in that book. As little bit of an AT nerd, I was loving this. I was asking him questions about the trail in 1978, particularly the Kennebec water crossing that I was about to see in a few miles. The man recounted running from here to the water crossing in order to fjord it at a lower level. Today, thru hikers and section hikers are afforded a short canoe ride to the other end. Very different times we’re living in. 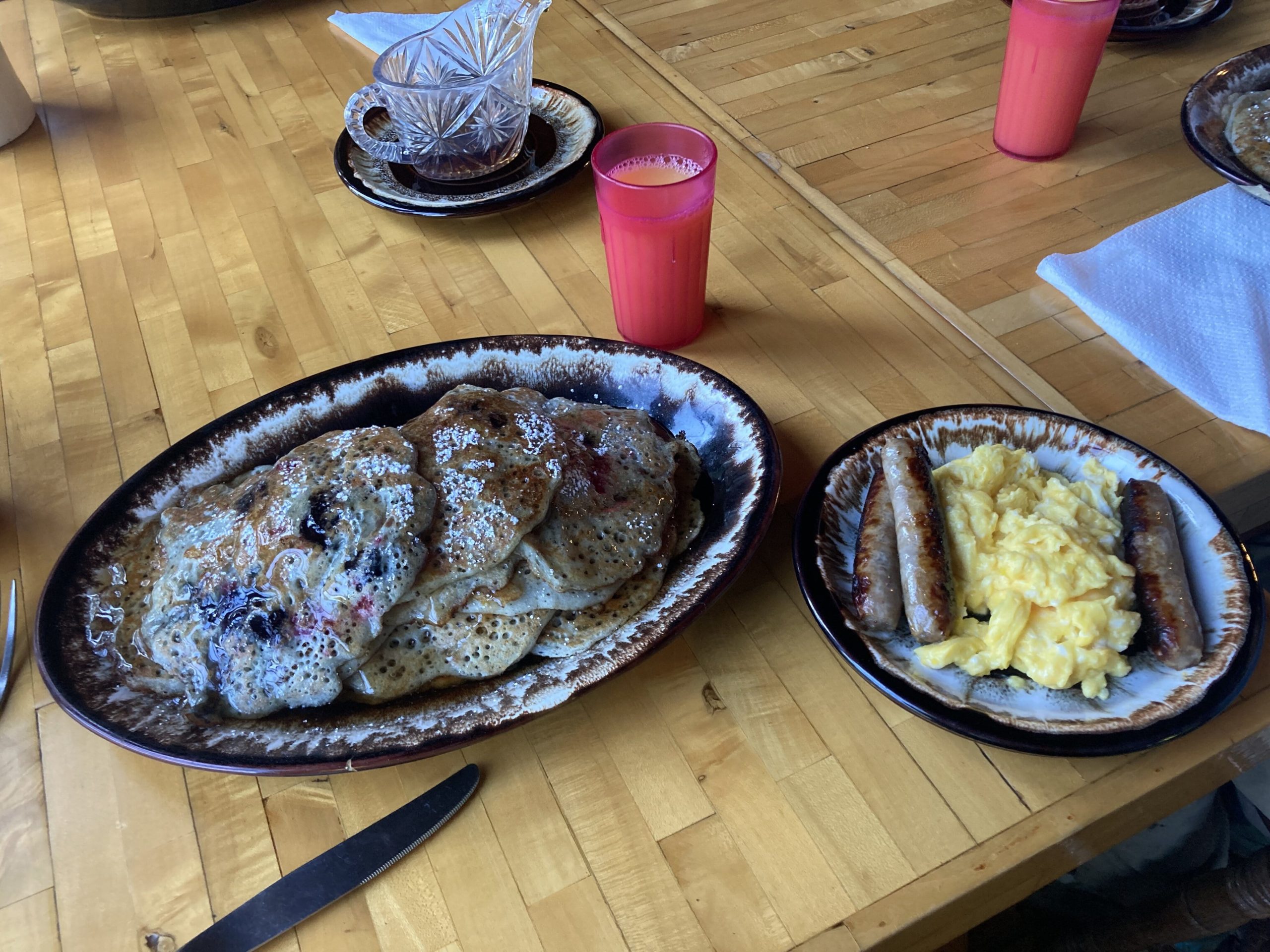 Look how delicious this looks

After a nice social hour, I sensed Margarita wanted to start hiking. She was right. So we said our goodbyes, thanked Tim for his hospitality and paid him ( I had a brain fart and thought Tim had shorted me money. I stupidly said he owed me a few more dollars, only to realize I just miscounted. I felt so dumb and rude for this. Even if he did short me, I shouldn’t have cared). The trail from Tim Harrison’s to the river was easy with little to no elevation gain. When we got to the crossing, we saw that the canoe was up and running. We waited patiently for our turn. When the man in charge of ferrying hikers came to us, he gave us waivers to sign. We dug around the papers and saw the name of Peach Fuzz who had been the last hiker to cross yesterday. Margarita crossed first because the ferryman left the other life vest on the other side. As I waited for him to come back, the boys group from last night caught up to us and were waiting to cross as well. The ferryman eventually came for me, and I boarded with one of the boys from the camp. The boy took the paddle, so I just sat back and enjoyed the ride. 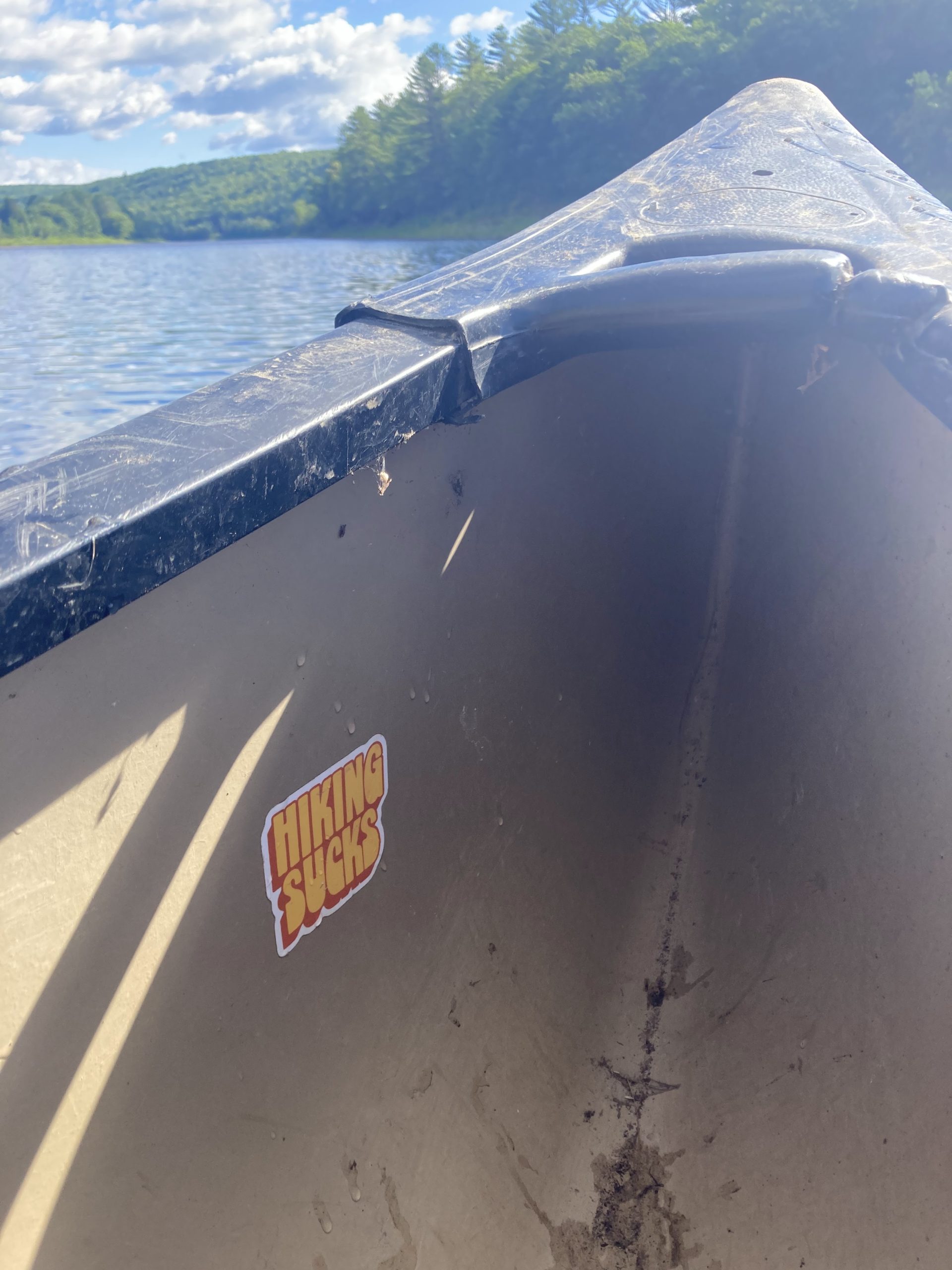 Margarita was waiting for me at the other with a coke in her hand. Some trail magic awaited hikers who crossed! But Margarita and I had a dilemma. She only had enough food for today, nothing for tomorrow. She needed to resupply. Caratunk was the nearest town, but it was about a mile away, and we had no reception to call a shuttle. To make things even harder, there was only one place to resupply in this town. A place called the Sterling Inn. Margaritaville being the more seasoned, braver hiker than I started walking down the side of the road with her thumb out. I am not a hitch hiker. In fact, I had not received a single hitch from thumbing so far (I know, so unconventional). I just always scheduled resupplying at trailheads with good reception to call a shuttle driver, or at a hostel, or if I pass right through a town. We marched towards the Sterling with Margarita trying to thumb a ride whenever a car raced by us. To no avail. At some point we stopped and realized that we would be wasting so much time getting to the Sterling, resupplying and then walking back. I had food for today and tomorrow, so I tried to give her some of mine to offset her deficit. But this now meant that we both had an inadequate food supply. We were going to take our chances. We started walking back to the trailhead, but out of nowhere, the big, white van with the words Sterling Inn passed by us. They must be dropping hikers off at the trailhead. We stopped and waited until eventually the van came back our way. The driver pulled over to the side and told us to hop in. Magic! The owner of the inn had picked us up!

We got to the Inn and were greeted by one of the most hiker friendly establishments. Free shuttles to and from trailhead, an extensive resupply shop, and a nice living room to relax in. Also outlets to charge our phones. We got our food for the next day and then rested in the living room. There was a piano, so I indulged myself to a few tunes that I remembered from years back. I then found an old book that detailed the history of the Maine section of the Appalachian Trail and was enthralled by the old photos and texts. It is humbling to read these old stories of the early days on trail. Further cements my deep appreciation for this Appalachian creation.

Margarita and I asked the owner for a ride back to the trail in which he obliged. Caratunk is a very small town, so I think he enjoys the constant flow of thru hikers coming into his place. In another trip I would have stayed in his inn for the night. He dropped us off and told us not to worry about the next few climbs. They were nothing compared to what we just went through. And indeed he was right. We went up and over them in no time. The trail flattened out, we were walking faster, and everything felt like it was all coming together.

The final climb stood before us. Moxie Bald Mountain. Looked bad on FarOut, but it would be the final big climb until Monson. I guess I had been saying this for almost every climb, but I swear this really was the final one. The climb was easier than expected, and we reached the bald quicker than expected. It was a beautiful view up there with the evening sky, and the even higher North Peak beckoned Margarita slightly. She asked if I wanted to take a blue blaze trail to it. I said I’d think about it and let her know when we get to camp. 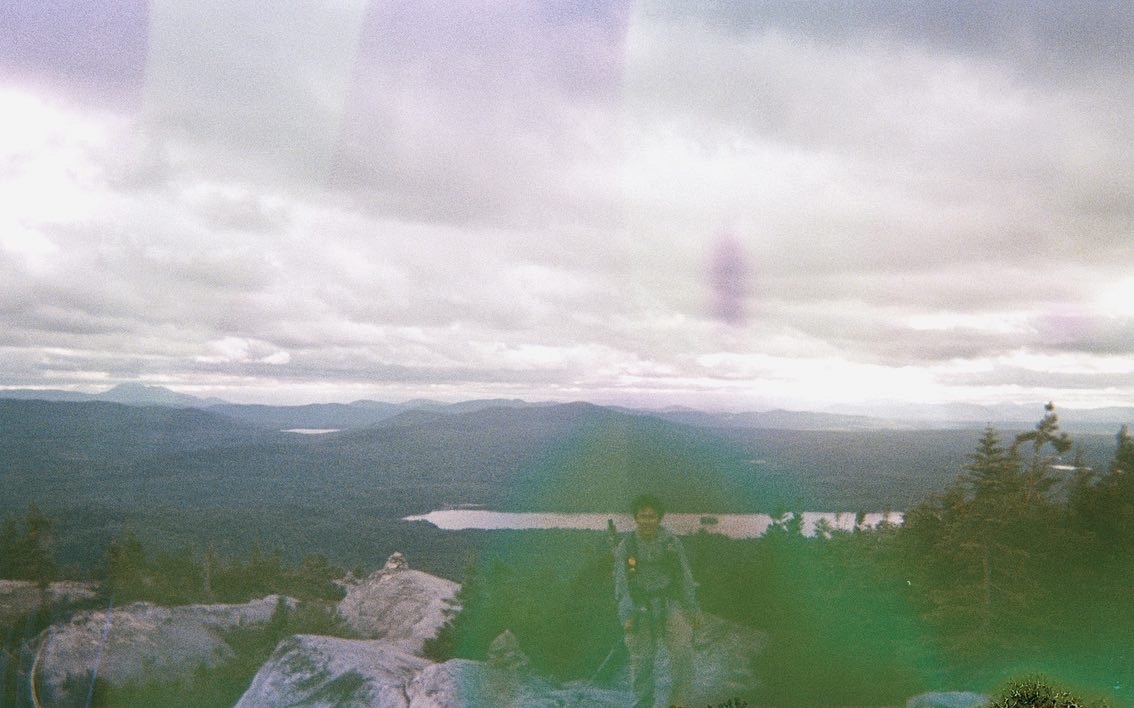 These were all taken with my film camera. Water damage compromised every photo I took leaving only a few to be salvageable. 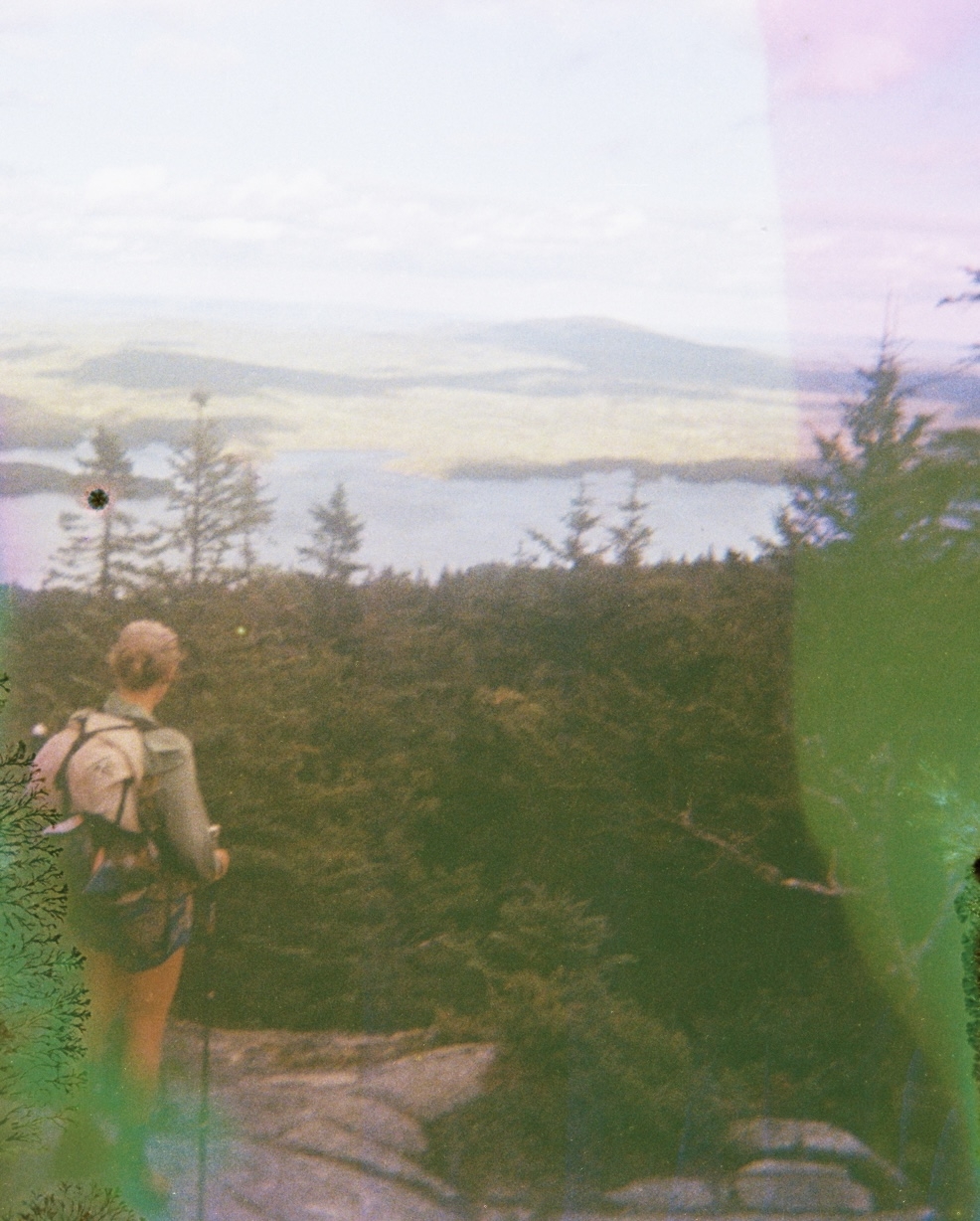 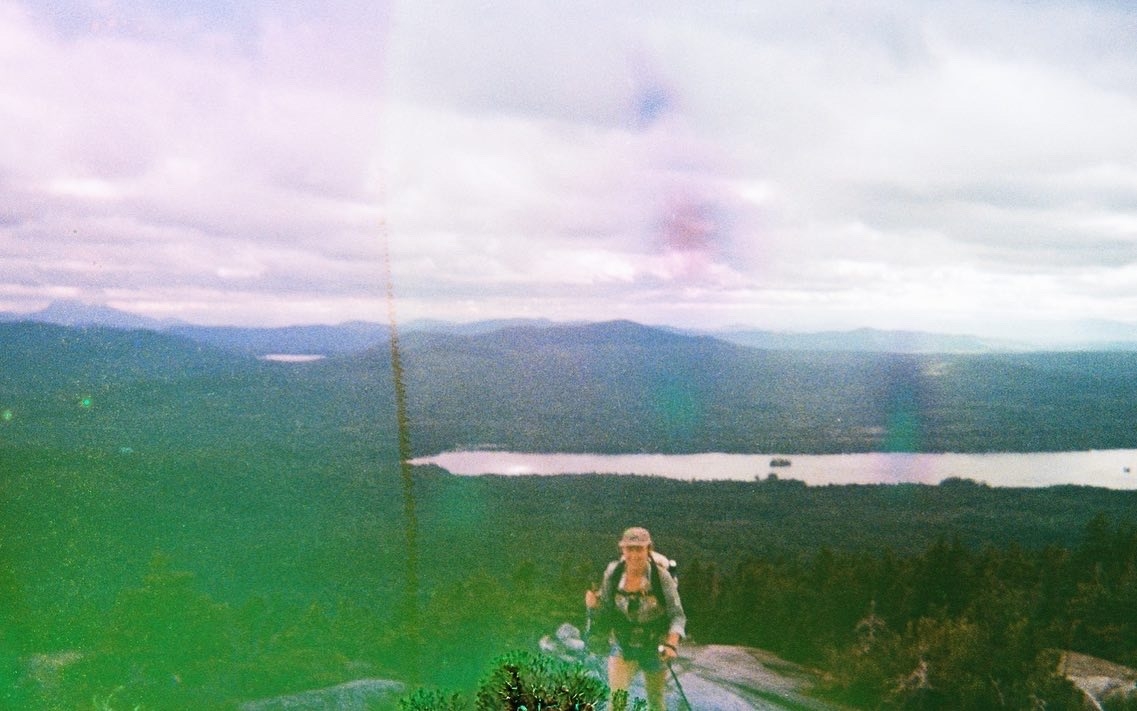 Margarita with Moxie Pond in the background

We descended to Bald Mountain Lean-to where we met a cluster of other hikers eating dinner. We introduced ourselves and set up our tents at the site. We filled our waters up at the pond and then made our way to the table for dinner. It was at this point I told Margarita that I didn’t want to take the blue blaze to North Peak. We had a nice laugh about it. Some SOBOS ate dinner with us and warned us about a muddy brook crossing tomorrow. They said it was impossible to stay dry. Yikes.