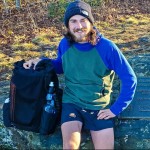 Out of the Fog, into the Clouds: A Prospective Thru-Hiker’s Path to Sobriety

Throughout my life, I’ve always found comfort and solace in the woods. A trip to a campground in Estes Park, Colorado, with my dad and brother when I was four was always my favorite vacation and one of my fondest memories from my formative years. The smell of the trees in the thin mountain air was burned into my brain. I always bragged about catching my own Colorado rainbow trout and cooking it back at camp over a coal-fired grill. Sure, I caught it in a stocked pond and my dad did all of the prep and cooking, but I never felt that fact helped my narrative much.
As a teen growing up in Connecticut, I’d get into your standard pubescent mischief in the woods by my house. My friends and I would spend our time building bike jumps, smoking pot, and drinking the beer we’d get from the bodega in Hartford willing to sell to 17-year-olds. We’d run wild through those trails, the trees keeping us shrouded from the harm and judgment of reality. We were always just glad to be with friends, unsupervised in the great outdoors, learning about life on our own terms; away from our adolescent duties if only for a little while.
Right after I turned 20, I ended up moving to Colorado, the magical place that never left the back of my mind from when I was a kid. I hadn’t been there in 16 years, but the Rockies were just as idyllic as I remembered. I spent as many days as I could riding my bike to the base of the Flatirons, locking it to a tree, and getting lost in the forest for a few hours; I’d push up and up until my legs were sore and my gaze stretched far over Boulder County. Though I eventually moved back to Hartford two years later, I felt as though a part of me never left the aspen-riddled expanses of those Rocky Mountains.

In  July 2018 (the 17th if we’re counting), I made the difficult decision to give up alcohol. My drinking had started off in my early 20s as a deep interest in craft beer and wine. I was working in a fine wine and spirits shop and visiting breweries on a weekly basis. I saw my relationship with it from a hobbyist’s perspective. My obsessive nature with everything I take interest in came to bite me this time, though, as it quickly and inevitably sent my drinking habits spiraling downward.
By the tail end of 25, I had admitted to myself that I had lost control of my drinking and my life, and I needed a drastic change. I was drinking four to five times a week, always in excess; no longer for the love of the craft, but for the escape it brought. During one particularly bad hangover I decided I never wanted to feel that terrible again in my life. The all-too-familiar forests of Connecticut were the first place I ended up.

Getting Back to Elevation

In my first days of sobriety, I would go for a hike every morning and every evening through the woods behind the farm that I had now been staying at for a few months. Walks in the woods have always been my go-to for finding myself; something I was in desperate need of, more so than ever before in my life. I was mostly unemployed, staying at a friend’s in exchange for farm work I was barely doing, and felt completely lost as to where to move forward.
These walks were a godsend for stepping away and viewing my newly sober life with some scope, helping me calculate the obvious next steps in my life. Among the obvious moves of getting a job and moving into my own condo, I decided upon the biggest challenge of my life: preparing for a solo thru-hike of the Appalachian Trail.

The AT had been in the back of my mind for years, mostly as a thought along the lines of “It would be cool to hike the whole thing,” never as anything I’d fathomed actually accomplishing in my life. But at the juncture I was at, it was clear now was the time to do it. I didn’t have a career I was committed to, I wasn’t in any sort of relationship that would be hard to leave behind, and if I stayed active, I would be young and healthy enough to handle the physicality with ease. I had done plenty of camping and lots of hiking, but no backpacking up to this point. Still, even without the obvious prerequisite of having ever backpacked, it seemed like the perfect big goal to work toward to give me some focus and purpose throughout my early sobriety.
Over the course of the next year, I began researching obsessively, chipping away at my gear list piece-by-piece. I bought an AeroPress for brewing coffee at home in the morning. Next I picked up a Jetboil and a Sawyer filter so a friend and I could brew coffee to celebrate six months of sobriety on a snowy mountaintop in my home state of Connecticut. Rock climbing came into my life on a regular basis, so I purchased a pack to use as my crag bag in the meantime. For my first overnight climbing trip to Thacher State Park in New York I bought a sleeping bag. Lastly I bought a tent, tasted how close a fully functioning setup was, and drained my modest checking account getting the last odds and ends.

The sky finally clears up on my shakedown hike of the Pemi Loop. Just in time to reach the parking lot.

I took my new setup to do a solo hike of the Pemi Loop in the Whites the following weekend. This shakedown hike was my first backpacking trip ever, and it was the perfect place to put my gear and my mettle to the test. The loop itself is 31 miles with 9,000+ feet of elevation gain, plus a few miles of approach and return, reaching the summits of eight of New Hampshire’s 4,000-footers. I got rained on two and a half out of the three days I spent there, accidentally descended and reascended 2,500 feet and five total miles off course, and dodged lighting alone on the ominous Bondcliffs, but it was the happiest I’d been in years. I confirmed that I truly loved backpacking and that I had what it took to rough it in the woods solo for a long period of time.
One of my biggest fears when I gave up drinking was that I would be giving up a part of myself; that I wouldn’t feel complete without this thing that seemingly everyone my age is doing. But now that my thru-hike looms a mere five months away, and I happily tote more than 15 months of sobriety and growth, something has become clear: Whatever I’ve given up to get where I am has been filled with something much larger, and much more whole than anything I’ve left behind. I don’t know what I’ll find on the Appalachian Trail, who I’ll meet, or who I’ll become. But I know I’m ready.

I'm a Connecticut-based prospective Appalachian Trail NOBO thru-hiker, gearing up for my first attempt at a thru-hike. Currently working as an axe throwing coach. My hobbies include rock climbing, riding my unreliable 34-year-old motorcycle, not being any better at skateboarding than I was 10 years ago, brewing coffee in the woods, and pounding half-gallons of store brand moose tracks without repent.