Now, where were we?

At last we spoke, I was busy pillaging my closets, raiding REI, and ordering on Amazon in an attempt to assemble a well-rounded but not too poundly pack. My base weight is floating between 18 and 20 pounds right now as I make final clothing choices and decide if it’s really necessary to bring five pencils.

June in a Nutshell

Base weight aside, I grossly underestimated the toll that working as a full-time special ed teacher Monday through Friday and a nearly full-time server Friday though Sunday would have on my sanity over the last two months. Racing from crowded classrooms to an even more crowded waterfront restaurant while making lists in my notebooks and waiter pad about beef jerky vs. dried mango while trying to move out of my apartment, graduate from my master’s program, and go out ferociously with every group of friends because #thruhiking? Not a perfect recipe for sanity or sleep, though I’d like to think the back to back to back double shifts have prepared me mentally for at least some of the ardors of the trail.

When I’m slogging through mud in the 100 Mile Wilderness, soaked to the bone and wondering why the fuck I quit two solid jobs and abandoned a well-decorated apartment, I will remember. I will remember the horror of getting punched by a middle school student, the wrechedness of being spoken to in condescending tones by people who believe jewelry matters, the irritation at being berated by a gluten-free granny who didn’t read the menu, and the sheer frustration of screamed at by a parent for her child’s failing grade when he hasn’t been to school for two weeks. When I’m sore and blistered and choking down ramen for the sixth day straight, I’ll remember that very few people get to be free.

Once my base weight was set, I realized that it was about to double. What would titanium pots and thimble-sized stoves be with naught to cook within and upon them?

Food, for the record, is heavy. Since we (my boyfriend is section hiking the first two weeks with me) are starting with Katahdin and the 100 Mile Wilderness, we packed the recommended 10 days of food. Calorie-dense crap. Sodium-soaked soups and sides. Chocolate – so much chocolate! Chocolate squares, chocolate bars, chocolate-covered fruit, chocolate-covered espresso beans, hot chocolate…it’s going to feel like Christmas every single day. After loading five days/10 pounds of food into my pack, I realized that a food drop would be necessary. My boyfriend initially felt that this would be cheating, but after hoisting his 22 pounds of food into his Osprey, he quickly acquiesced to the drop.

Here are a few shots of the meticulous food packing party that’s been going on over the last month. Seriously, who knew the Yonkers Family Dollar contained so many treasures in such a small perimeter? 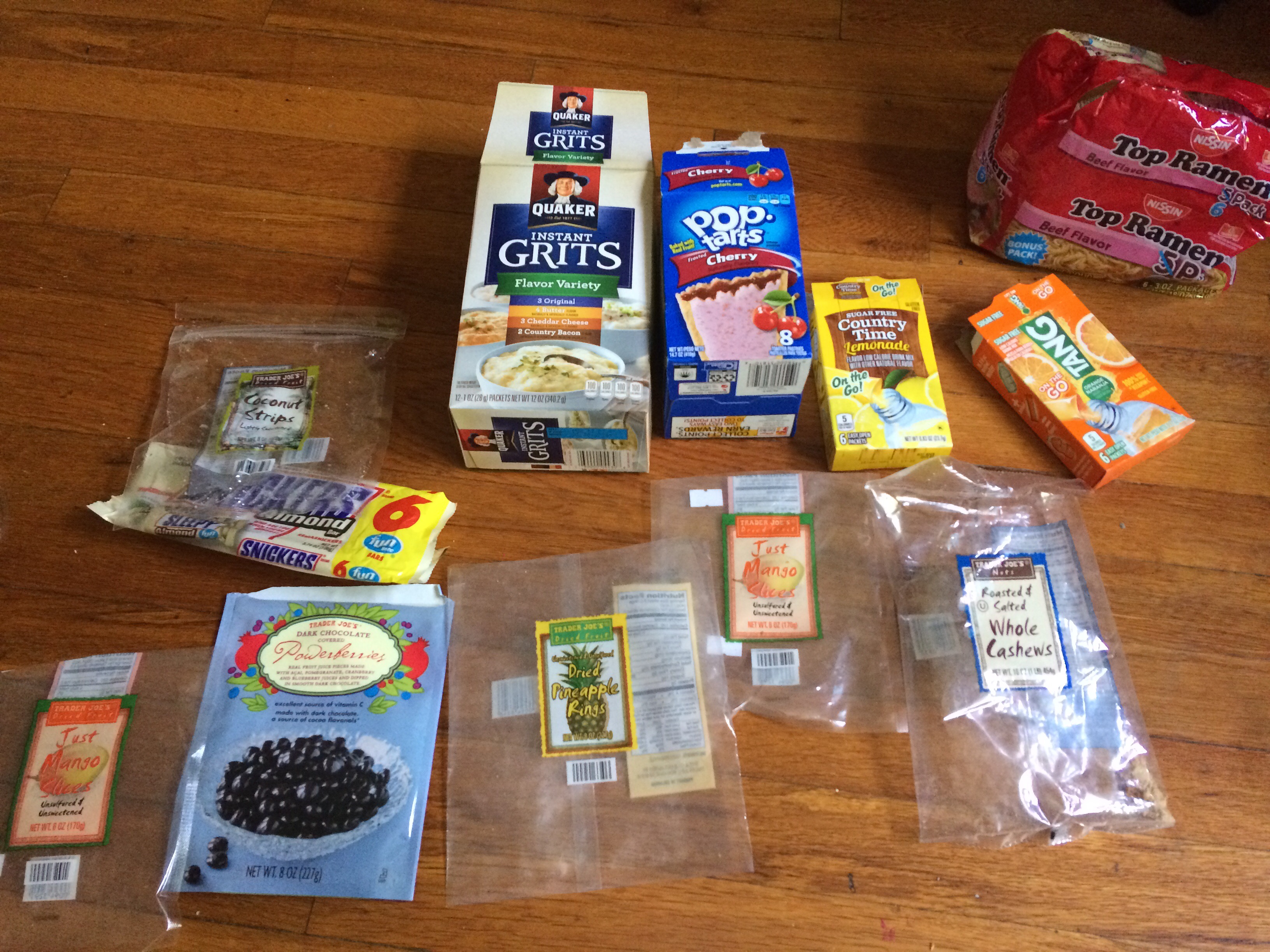 Breakfast and Snacks: Pop Tarts, Grits, everything they sell in the Trader Joe’s snack aisle, and various juice mixers 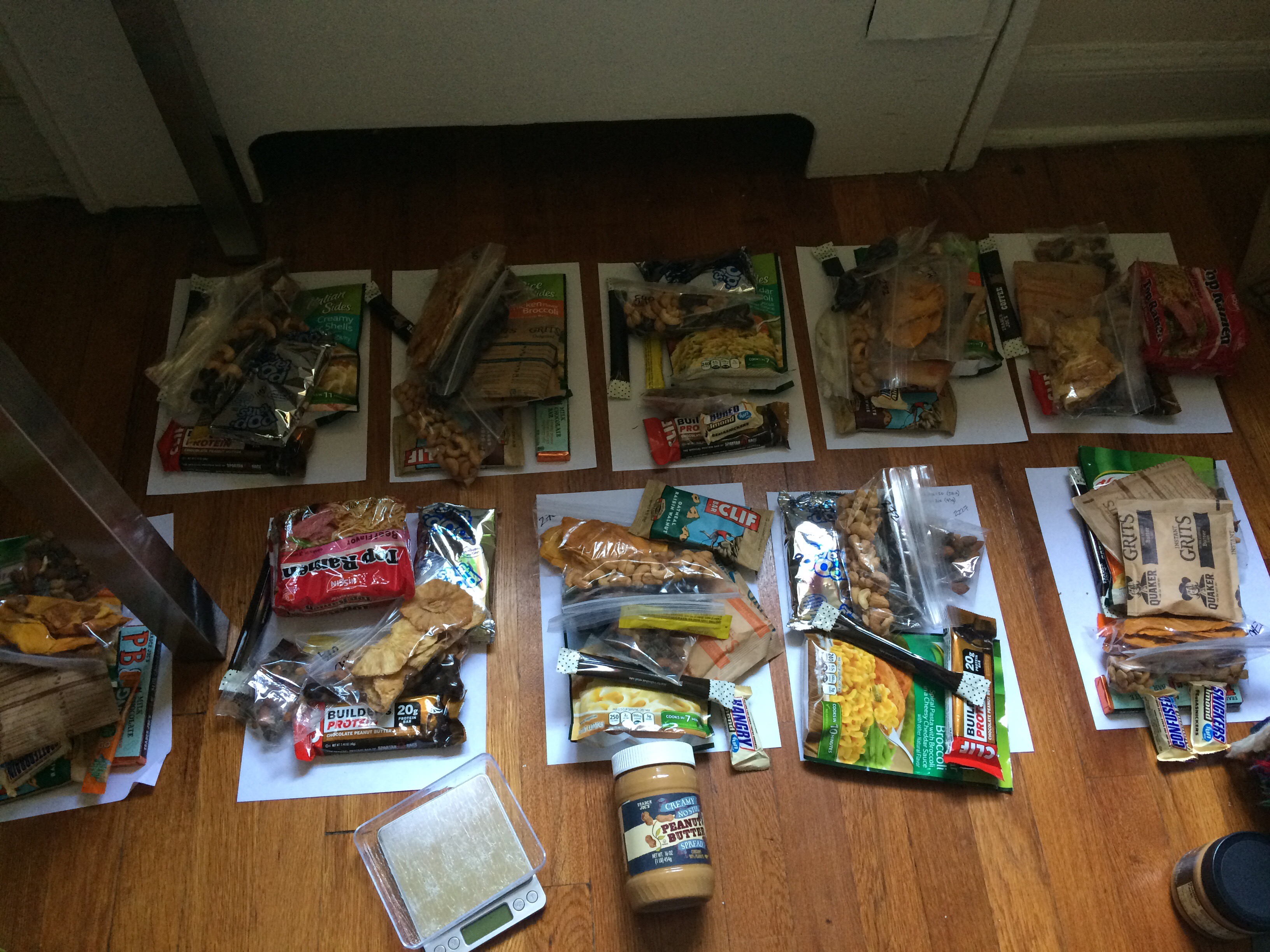 Square on squares of packaged food: Who knew there were so many Knorr’s Sides? 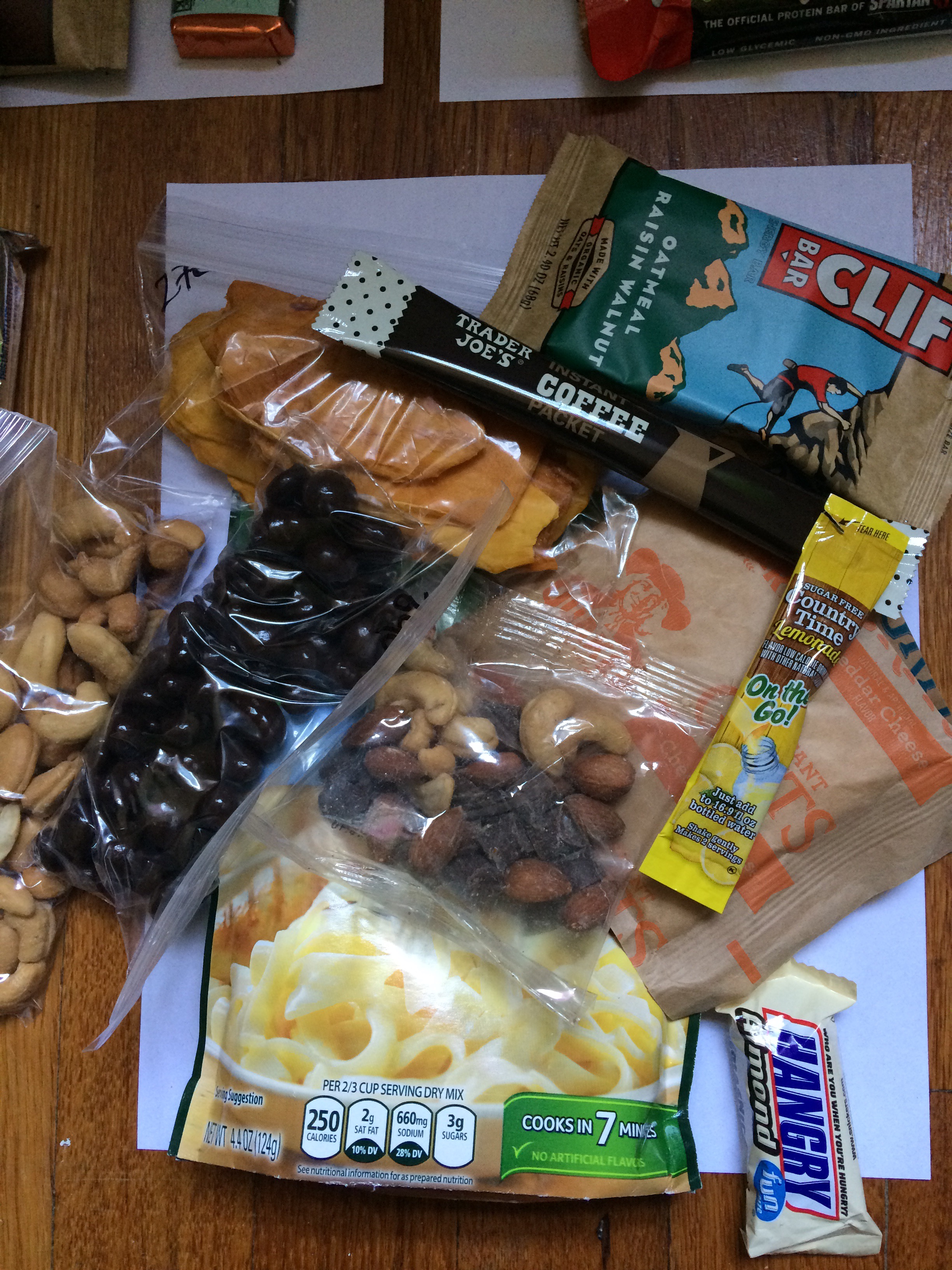 Up close and personal with daily rations! The tiny nut/chocolate bag packs 260 calories into a handful of mix, or at least claims to.

NYC to Maine: An Odd-essy Indeed

And then, amidst the frenzy of packing and ordering and returning and grading and partying and good bye-saying, Thursday the 29th had arrived. Our bus left Port Authority at 4 am, so we eschewed a ride from my parents in favor of taking the last train into the city. 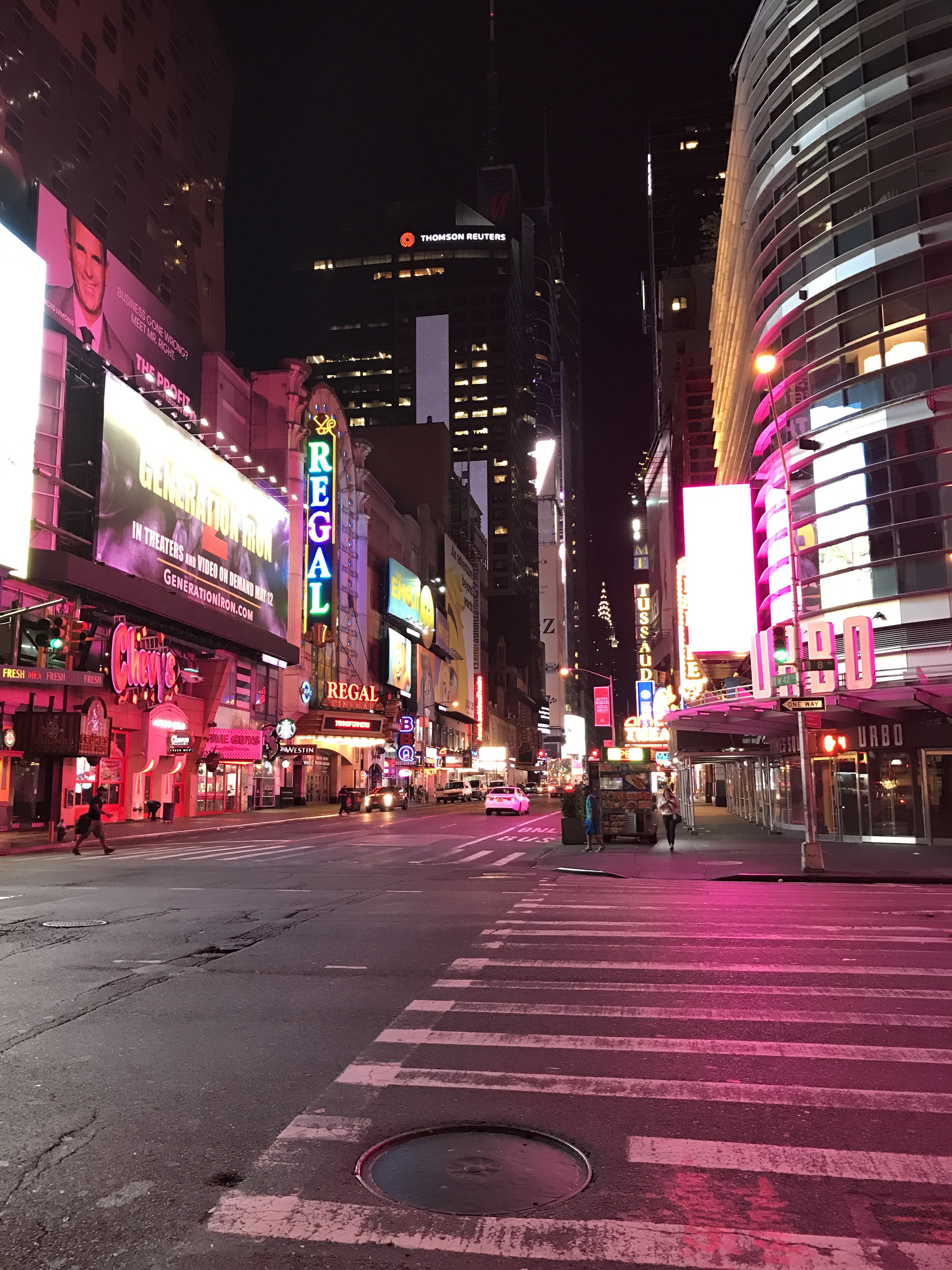 An assuredly striking juxtaposition with the next three months.

There’s no place like Port Authority in the wee hours of the morning to make one long for days upon days of solitude and nothingness. In a zombie haze of pseudo-awareness, we drifted in and out of sleep from New York to Boston, and then Boston to Bangor.

Are we really going hiking? Or are we going the be in bus limbo for the rest of our lives?

But the end is nigh! The second to last leg is underway, and the bus has fewer people without packs than with packs. Z-Lite sleeping pads bounce light beams back and forth: We shall hike! With excitement, and with almost 100% assurance that this motorized journey is almost done, I sign out.