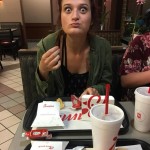 “Yeah, you have a very… particular kind of body. I haven’t seen too many people with your kind of problem”, Turner the REI guy told me. He was an older gentlemen: looked like he would be a really nice grandpa.

I was with him for about an hour trying on different packs. Women’s, men’s, unisex, small, medium, different hip belts, anything that would fit my waist.

“Well, it’s a lot better than what I have now. I am gonna walk around with it a little and see how I feel,” I replied gratefully.

Apparently, in the world of backpacking, tall, thinnish girls are a minority. After a week on the trail I shrunk out of my Gregory pack. When I tightened my hip belt all the way the buckles would touch. This caused all of the weight to fall on my shoulders and made my collar bones bruise and bleed.

We settled on an Osprey in women’s medium. I had a couple of inches left on the hip belt before the buckles touched. It wasn’t perfect but it was better than what I had for the last 60 miles.

“Just don’t lose anymore weight! You hear!” Turner told me as I was checking out; clearly worried for me, but how could he not be after we spent so much time together.

I laughed and said,  “I’ll try to eat more candy bars. Thank you for all of your help.”

After two hours in the store, I left with a new pack and raincoat (s/o to REI’s exchange policy), ready to take on the next 2,160 miles.

I couldn’t blame him. He was an older gentleman, 67, with blisters. His grandson was sick and he missed his wife. I never judged him, but almost got teary-eyed myself when I saw his daughter cry as he drove away.

As we continued to hike out of Dick’s Creek Gap, I decided to give his daughter some space. I figured she needed some alone time.

I stopped and took off a layer to let the gap form between her and I more naturally.  It was getting hot anyway and I knew I would be good just hiking in my base layer and raincoat.

I shoved my fleece into the outside pocket of my new pack, put it back on, snitched down the hip belt, and. . .

“W-what?” I choked out, taking another step.

“Why?” I demanded from my hips. Why did they all of a sudden start feeling so terrible? I was fine for the past two days. Why was this happening to me?

Then all of the sudden, clarity of the situation came to me.

I unclipped the hip belt and let all the weight fall to my shoulders, taking slow steps uphill to a nearby log, a result from a tree fall.

I removed my pack and slowly began lowering myself down onto log until I was lying down.

I pulled down my leggings, relieving my hip bones, and there it was, just as I thought.

They were red, burning, and raw.

My fleece layer was protecting them from the full weight of my pack, but as soon as I removed it, the padding just wasn’t enough and my bones finally felt the 35 pounds for the first time.

I lay there for a second, taking deep breaths. I couldn’t hike with that many layers on all the way to Maine. I knew it would take time for my hip bones to callous up just like my feet, but that wouldn’t happen in the next ten minutes from just lying here on this log.

I thought about taking out my extra pair of socks and placing them on my bones, but they were buried deep inside my pack, and I didn’t wanna dig for them.

Instead, I grabbed my trekking poles, and started unraveling the duct tape wrapped around them.

I tore off two strips, lay back down on the log, and slapped them over my hip bones.

Now stay! And stop hurting!  I told them.

I pulled my pants back up and carefully laid my shirt back over them, zipped up my raincoat, and placed my pack back on.

I tightened the straps and winced.

No, I told them as warning.

I took a step.

“Better,” I sighed, “So much better,” I said out loud to the trees.

I grabbed my trekking poles and started uphill, content with my tape job.

I couldn’t help but smile.

What the hell am I doing to myself?

Hey y'all! My name is KD. I am a super tall, super outgoing, super goofy AT Thru Hiker! I've been wanting to Thru Hike since I was 16 years old, and after 3 years, 2 majors, and 4 eighteen credit semesters I finally am getting my chance. I had a really cool job in college where I got to take students on Adventure Trips. I am an LNT Trainer, lifeguard, and WFR, but a real achievement of mine is being able to eat an entire bucket of movie theater popcorn. Things that I've done that make my mom worry: Dirt-bagged around the Pacific North West, hung out with bears, hitched hiked around New Zealand, smelling really bad, befriend hobos, and Thru Hiking the AT!