Franklin to Fontana Dam
The balds 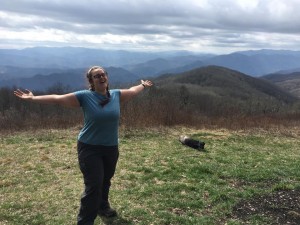 I woke up early so I could go to the hiker breakfast.  The baptist church in Franklin almost every morning during thru hiker season serves a bacon and pancake breakfast.  They came and picked us up from the hostel and fed us graciously.  Afterwards I waited for the other two boys at the hostel to ready their bags so we could all be driven back to the trail.  It was going to be 11 miles of mostly uphill that day but I was more than capable.  I saw my first bald mountain of the trail (Siler Bald) which had almost 360 degree views. I continued slowly through the afternoon heat until reaching the next bald (Wayah Bald) which had a stone tower for viewing on top.  On my way up I got the end of some trail magic as two rolling a cooler down the hill handed me a Corona.  I drank it at the tower and took in the amazing views.  Then with a mile left I got to camp during sunset.  While hanging my bear bag that night the branch broke with a loud crash so I had to throw another line.  Other than that it was a perfect day! 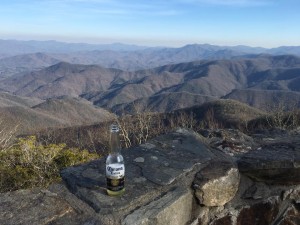 Wesser bald
The next day I walked about 10 miles up and over cooper ridge and Wesser Bald. There were good views on ridge and on the top of Wesser Bald there was a platform.  I went up the old shaking wood steps to an open platform with 360 degree views.  I was in awe.  The climb had been difficult but totally worth it.  On my mile journey down to the shelter it started to rain so my timing on top had been perfect.  We had a fun time in the shelter that night cooking dinner with some funny thru hikers asking some silly questions (super power, last meal, ect.). A family that were section hiking from deep gap to the NOC gave us bracelets to carry to Maine which was really special.
I want water!
The next morning we all headed down to the NOC (Nantahala Outdoor Center). It was a pretty steep downhill and I almost slipped several times.  There was a fog lifting and as I walked the ridge I saw mountains slowly being uncovered.  There was an awesome view at a place called the jump off. I walked with Nesquick (a guy who had been at the hostel and at the same shelters for the past 2 nights) and Dawn (who’d been at the shelter the night before).  Got to the NOC and ate a huge lunch at the restaurant there.  It was hot and I was feeling lazy so I left at around 3 pm hoping to camp at a place called grassy gap which looked flat and had water according to the guide book.  It was a steep hill and I got exhausted fast.  When I finally got to Grassy gap there was no sign of water.  I had a quarter of a liter and would have to walk another mile to a spring that hopefully had water.  I was scared about the situation and cried. Then I got up and walked and when I saw water I almost cried again in joy.  I collected 3 liters and just as I was finishing up Terrible Lizard and Tumbleweed come past me.  They had a few beers in town but we’re going to try to get to the shelter.  I followed while I could but it was starting to get dark.  Luckily I saw a stealth camping spot a foot from the trail on a ridge and I settled in.  I ate dinner during the sunset and was really satisfied with my first solo camping spot on the trail and I went to bed happy.
I almost lost my phone
I woke up safe after my first night alone.  As soon as I was packed I started up the hill.  There was a steep uphill to Cheoah Bald  which had a really nice view on top.  The downhill was super steep and I had to butt slide a view times on the rocks.  I was curious of the time so I went to the pocket in my pack that always has my phone and it wasn’t there.  I took off my pack and double checked.  It must of fallen out, but when?  I had taken a photo on top so it could be anywhere in between.  I rushed up the hill glancing on both sides of the trail (it’s unbelievable how fast I could move without a pack).  Within 5 or 10 minutes I found my phone sitting on a rock I had slid down.  I don’t know what I would of done if I couldn’t find it but I didn’t want to think about it.  I was just so happy that I had stopped when o had.  Exhausted from the adrenaline rush my energy was drained and I had trouble getting down the hill to my lunch spot.  I wanted to camp there but after talking to my mom I moved on to the next gap where a group was planning to camp.  I was greeted by a no camping sign and I wasn’t feeling well again so I called a hostel (Cabin and n the Woods).  I was picked up by a nice lady named Donna and since I had the cabin to myself because I was the only guest that day.  I also got to shower again!
The quick day
The next day it was drizzling in the morning as I got ready to go back.  I got driven back to the gap and began the trail.  With no warning the trail became one of the steepest  grades I have come across so far.  It snaked up the mountain.  I was on Jacobs latter.  By counting my steps I got up and the rest of the day was easy in comparison (just foggy and cold).  I got to the shelter extremely early and with nothing to do I went to sleep before it was dark outside!
Fontana 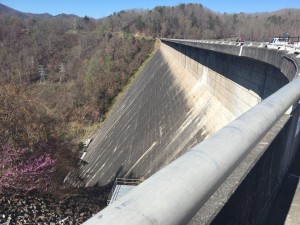 I slept in a little because there was some rain the night before.  I was getting to town so I threw my wet tent in my bag and started hiking to warm up.  The ridge line soon gave views to the giant lake in Fontana and eventually the giant dam holding it all.  I finally got to the road where a shuttle picked a few of us up and brought us to the lodge where I received my resupply package (thanks parents!). I organized it and dropped off about half at the post office to be sent to Gatlinburg TN.  I Had drinks with Terrible Lizard, Tumbleweed, Footlong, BooknBoot and then split a room 4 ways with some more hikers (Moses, Fob, Stitch).  Tomorrow I hit the smokies!
< Previous Post
Next Post >