We woke up the morning of March 17 to a beautiful, blazing sunrise at the top of Tray Mountain. Shortly after that, the clouds rolled in. 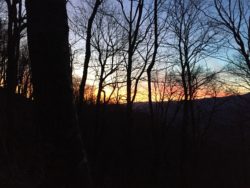 St. Patrick’s day was long and trying for both of us, though exactly why it was is difficult to say. Perhaps it was because I had spent the night without a sleeping pad to lay on, or because I had lit my hair on fire cooking my cream of wheat that morning. Maybe it was because the trail consisted of slick, dark mud that made us slip and slide with every step, or because when we stopped to eat lunch we got so cold that we could barely hold the Clif bars and trail mix in our hands. All I know is that when we finally arrived in Dick’s Creek Gap to pick up my new Thermarest NeoAir sleeping pad from the Top of Georgia hostel, Chelsea and I both were feeling pretty spent.

We only intended to pick up my package and leave, but then Chelsea mentioned that maybe we should have dinner there, and then the people working there told us there were two bunks left so we better act fast and then the next thing we knew we were filling out waivers and forking over money even though neither of us recalled ever having said we wanted to stay. In the end it was our fault, but we couldn’t help feeling a bit swindled and it put us in a salty mood. We thought we might try and salvage the night by heading into town and celebrating the holiday in a proper fashion, but when we asked the hostel personnel for bar recommendations, they told us there weren’t any places to drink except the Mexican restaurant, which served beer. Defeated, we sauntered off to bed at 7. Our stay wasn’t a total waste, though, because at least while scrolling through a bunkmate’s iPod we found a band that happened to have the perfect trail name for Chelsea: Foxy Shazam.

We left the hostel the next morning under dreary, drizzly skies and hiked out of Dick’s Creek Gap in a fury. The conversation was decidedly feisty. Our rage targeted hostels, the government, baby boomers, creepy old men, creepy young men, men in general. We came up with an idea for a book that we intended to call “Trees We Respect. People We Hate.”

We arrived at Plum Orchard around 5 and cooked our dinner there, but as the shelter filled up, we found that we were not digging the vibe. We knew that the state line was only five miles further, and we figured that if we had to use our headlamps it wouldn’t kill us. It was time to get out of Georgia.

We walked along the high ridges, watching the shadows of the trees lengthen between the patches of golden light as the sun sank deeper on the horizon. We arrived at Bly Gap, a tent site just a few yards North of the Georgia/North Carolina state line at the exact moment that the last glorious spec of daylight gave way to total darkness. We woke up the next morning freezing, but exhilarated. One state down, thirteen to go. 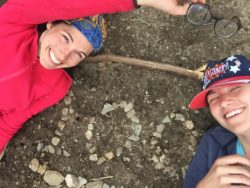 Crossing the border marked the first big accomplishment in a string of major milestones that we were to reach over the next few days. On March 19, we walked fifteen miles for the first time. The following day a grueling, nearly vertical climb up stone steps spit us out onto the summit of Albert Mountain. There we found a fire tower and a sign arranged out of stones announcing that we had officially walked 100 miles.

It was around this time that we really began to feel the effects of the distances we were traveling and the loads we carried. We would get into camp each night with aching feet and burning legs. In the mornings when I woke up, I could feel every individual joint in my body from my neck to my toes screaming in pain and begging for mercy. As I took my first few wobbly steps out of the tent, I would think to myself that this must be what mornings feel like when you’re 150 years old. About a day and a half into North Carolina, we also noticed our fast dwindling food supply and shortage of fuel for our stoves. During our long daily marches, we would fantasize about juicy burgers, pizzas, pints of Ben & Jerry’s, fresh fruit, and cold glasses of beer. We started talking about Franklin, NC as though it were literally the promised land. 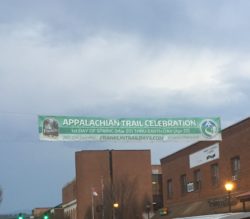 Franklin did not disappoint. If there is a more hiker friendly town in the world I would like to see it, because I cannot believe it exists.

We arrived the morning of Tuesday, March 21 after spending the night in the Rock Gap shelter four miles away. As we waited in the Winding Stair Gap parking lot for the free shuttle to take us to the Budget Inn, Foxy noticed that a piece of gear was missing. Just as she was talking about walking back to the shelter to look for it, a woman entered the parking lot from the trail and asked if we needed a ride to town. She had just finished a section hike with her daughter and had to drive in that direction anyway. We told her about our predicament and she offered to give us a ride to Rock Gap, which happened to be located right off of a forest service road. When we got there I watched as Foxy hopped out of the car, took about five steps, and bumped right into Dabba Do, who promptly produced Foxy’s gear from his pocket and handed it to her. She gave him a big hug with a look of relieved disbelief on her face. It was going to be a good day.
When we got to the Budget Inn, we were greeted by a sign outside that said “welcome AT hikers!” The man who checked us in told us that there would be a free 4 o’ clock shuttle to the Walmart and Asian King all you can eat buffet. He also advised us to check out the Lazy Hiker brewery and the free pancake breakfast at the First Baptist Church (a shuttle for which would also be provided the following morning).

After we settled into the hostel and took our showers, we agreed that our first order of business was to eat and drink as much as possible. We looked in my AT guide and saw that there was a sushi restaurant in town. Sure, we weren’t exactly near the coast, but sushi was certainly not the sort of thing we were ever going to get on the trail. We decided we were game.

We walked downtown wearing our most ridiculous possible outfits. I wore my cropped thrift store patchwork flannel and rain pants, and Foxy wore her spandex shorts and wild printed blouse with gold buttons. Both of us completed our looks with gas station shades and a pair of Crocs.

We arrived at Sakura Japanese around 2:30 and immediately ordered a bottle of sake. It was gone before the waitress took our food order so we ordered another one. In addition, we split a salad and three chef specialty rolls. All of it seemed 100% worth it until the bill came. We each dropped about $45 on one meal, which we realized probably wasn’t sustainable if we intended to keep this up while unemployed over a five month period. “Never again,” we kept repeating, “never again.”

That afternoon, we rode the shuttle to Walmart and resupplied our food in a far more aggressive manner than our impending thirty mile trek to the Nantahala Outdoors Center warranted. Then we went back to the hostel and split a six pack and a pint of Ben & Jerry’s while we sat outside talking to Sherpa and Bambi.

Mr. Watters, what a guy

The following morning, we walked over to the First Baptist Church and were treated to an unlimited breakfast of pancakes and bacon. One of the volunteers from the congregation came around and took all of our pictures and gave us each a copy along with a piece of paper and an envelope so that we could send them to a friend or family member. She asked us to please let her know if there was anything that they could do better to solidify Franklin’s standing as the best town on the AT, and she assured us that the congregation prayed for us every Sunday. The pastor got up and said a few words about how hiking the trail can be like following the path to eternal salvation through Jesus. And then just as we were about to head out, Foxy and I met a suede fringe jacket wearing, Jeep Wrangler driving 90-something year old man named David Watters. He introduced himself as a volunteer shuttle driver for thru hikers, but we learned that he was also a WWII Army Air Corps veteran, former NASA scientist, congressional lobbyist, and avid outdoorsman, among other things. We exchanged phone numbers and email addresses with him.

When we finally said our farewells and cleared out of the church basement, we returned to the hostel to take advantage of the hot showers again before checkout. We then indulged in a 75 minute restorative yoga class that Foxy Shazam had arranged with a local instructor that did wonders for our sore bodies. Then we went to the local outfitter, Outdoor 76, which is legendary for their exceptional customer service and shoe expertise. Foxy spoke to a fellow named Jeff and worked with him for over an hour trying, to find the right pair of shoes to deal with her blisters. She walked out with a new pair of Innov8 trail runners to replace her Lowa Renegade boots.

Finally, we decided it was time we got back to the trail. We thought it might be nice to see David Watters again, so we called the number he had given us to ask if his shuttle was currently running. He said it was, and he would be there to get us in five minutes. He drove us out of town back to Winding Stair Gap. The trip was just long enough for him to tell us the story of how he got a parking lot in Virginia named after him. Then he dropped us off, told us we didn’t owe him a dime when we tried to pay him, and told us to keep in touch. Then we took off into the woods again.

All in all, it was a great stay in a great trail town. I look forward to meeting Foxy’s eventual firstborn, whom she has vowed to name Franklin.