From Rocks to Bears

Hobble-It and I slept in somewhat, packed up, and had breakfast at the viewpoint. We got on trail later than usual; Come Along and Cricket quickly caught up.

Mid-day we stopped at the Thunderhead Lodge, a restaurant just off the trail. It had a water spigot, the only easily accessible water in 18 miles. It also had food and an outdoor patio with shaded tables. I sat with Hobble-It and Cricket while several thru hikers joined Come Along at his table. We drank glasses of ice water. I ordered sweet potato fries that I paired with food from my pack. It was a nice break.

Soon after lunch I came upon “The Knife”, a gigantic protrusion of steeply slanted rocks. I carefully picked my way across. The view was excellent as was that at Baked Oven Knob, a couple miles further. Before and after the knob, I encountered long sections of rocky ground that required care to navigate.

Near day end we were all tired and eager to reach our destination. For around a mile, the trail wound along the edge of the ridge with a view into a valley which contained a winding river, small city, and forest. The AT is usually stingy with views so I was impressed by the length of this one. A Canadian thru hiker pointed out tiny blueberries growing in low lying bushes beside the trail. I snacked on at least a dozen and they were delicious.

The trail descended steeply to George Outerbridge shelter. We camped at a slanted spot in the woods, slightly downhill from the shelter’s crystal clear spring. It was dark by the time we finished dinner. A few fireflies appeared and I heard fireworks in the distance.

I loaded my pack with three liters of water since we had a 16.8 mile carry. The trail crossed a bridge over the Lehigh river and quickly ascended. Soon I was using my hands and feet to clamber up a rocky face. I found it fun as I used to rock climb and there were large foot and hand holds. At one point, a water bottle slipped out of Cricket’s pack and plummeted to a stop in front of me. I recovered it and handed it up to her. 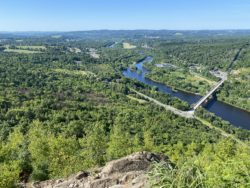 There was a water cache at the next gap and Cricket topped off her fallen bottle. The next ridge ascent trail took us over rocks inter-mixed with dried pine needles. In the midst of a gentle forested section, Cricket, Hobble-It and I stopped at a fallen log for lunch. We talked about Cricket’s eagerness to leave Pennsylvania behind; how she woke dreading the trail. Not me, I woke happy to see trees overhead. Each day is unique and I love that about the trail.

It was Independence Day and all of us hoped for trail magic. We came upon it at Smith Gap road, the last road crossing for the day. Two friends, David & Nancy, offered hard-boiled eggs. I eagerly said yes and took a seat. A thru-hiker from last year, Second Shift, placed a water cache at the road and came over to join us. He brought chips and snap peas. We asked him questions about the coming trail sections.

Our plan was to camp at the next shelter, but Come Along continued three miles past. We decided to join him as it would make the next day shorter. Hobble-It continued on while Cricket and I filtered water from the shelter’s spring. Dusk was falling as we reached camp. I heard a lot of fireworks, but did not see them. I prefer fireflies anyway.

A mile walk through the forest brought me to a highway. I was about to head to a motel with a spigot, but I spied a water cache where the trail reentered the woods. I filled up two liters. A 55 year old thru-hiker named All The Way came up the steps behind me. We walked together most of the morning and all afternoon, stopping briefly for lunch at the next shelter.

All The Way is a neat guy. I identified with things he said like how it will be hard to sleep in a bed again after so many nights waking in the woods. Also how he hopes to forge a new path forward after breaking away from the lifestyle others expect him to live. We talked about jobs we had and those we could possibly fit around backpacking summers.

It was sprinkling and I saw a vibrant red-spotted newt on the trail, which was then an old road. I hadn’t seen one since Virginia and was excited as they are amongst my top trail critters. All The Way spotted one that was a dull orange and then I saw a tiny one, no longer than the top segment of my pinky. They were all over; we kept looking for them and keeping count. Far down the road we spotted blazes and turned onto a path that generally ascended. We ran into a couple who asked why we were headed south. I was confused, apparently looking down for newts we missed a blaze and skipped a section of trail. Oh well, worth it to see 36 newts! We turned and followed the couple into Delaware Water Gap. 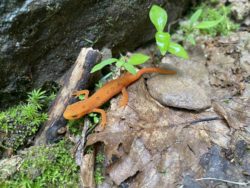 For my last night in Pennsylvania, I pitched my tent in the yard of a Presbyterian church. Come Along slept in the church’s hiker bunk room. It is donation based with a bathroom, outlets, and hiker boxes. I searched the boxes for treasures and got a fuel can with about 5-6 burns left and some first aid items. Hobble-It and I got sandwiches and sweet potato waffle fries at a cute bakery. She and Cricket were in a motel room and I used their shower before heading back to my tent. The forecast overnight rain didn’t come.

I ate breakfast, packed, and waited for the post office to open. The postal lady was kind and helped me find the least expensive method to mail a handful of items home. Then I took the trail out of town. I crossed the Delaware River on a pedestrian walkway beside I-80. Paint on the cement marked the New Jersey state line. Yay, it is my first time in the state! 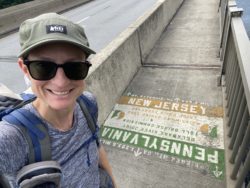 The trail used an underpass beneath I-80 then entered a recreation area, gradually climbing uphill beside a creek. I took a picture at the 1,300 mile point. At Sunfish Pond I saw a frog and a garter snake. A little later I encountered a colorful snake that vibrated its tail at me as it quickly slid off trail. It had no rattle and from research I think it was an Eastern Milksnake. My audiobook felt fitting for as I hiked so did the fellowship of the ring.

Shortly before 2 pm, I walked down a road to the Mohican Outdoor Center. Cricket hurried off to make miles and meet Hummingbird tomorrow night. I took off my shoes and rubbed a tendon in my right shin that was bothering me on downhills. Hobble-It and I chatted with Come Along, then he sped off to make miles and catch up to his friend Jill. The center had a deli and I ordered a sandwich from its teenage manager. Like I was in school it came with chips, a fruit cup, and a fruit rollup. Hobble-It hung out with me while I ate lunch then we continued on together. 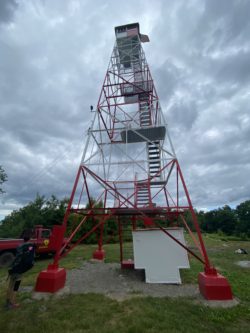 The red-painted Catfish Fire Tower perched on top of the next ridge. We climbed the 60 foot tower and its attendant, Bob, talked about his job looking for fires. It was a great view and he pointed out our route for the next couple days. At a Lilly pad covered pond that smelled slightly of sulphur, we got water and I saw several frogs. My right shin felt much better in the afternoon, perhaps the softer trail?

Shortly before we made camp I spotted a bear. It chowed down on something but eventually looked up, spotted us, and lumbered off. We were getting our dinners ready when All The Way arrived at the site. He set up his tent nearby and showed us cool pictures of a salamander and beavers that he saw at the Lilly pad pond.