The Smokies to Bazooko Circus

It seems that early morning is my time to write. It’s currently 2 AM and I again lay in a shelter joined by no less than 6 people who should be carrying small generators and C Pap machines. I think that every gear list for potential thru hikers needs to include a pair and a spare set of ear plugs. No offense to those members of the snoring hiker community, I too am a member.

The day following my first trail update was full of torrential down pours. It was the first time I hiked part of a day, let alone an entire day through the rain. Somehow we managed to smile the whole day and laugh about it. We passed several folks headed south bound on section hikes and we must have seemed to have lost our minds as we greeted them with smiles. I’ve never been so soaked in my life. It was amazing. I hiked behind my friend Hawaii through the rain that day.  I gave up trying to keep my feet dry after about a mile.  Surprisingly he kept weaving back and fourth on dry ground, trying to avoid the inevitable for an impressively long time.  Eventually he stopped and turned and commented on how he now had soaking wet feet.  I responded with; Yea I gave up an hour ago. Within eye sight of the shelter I ran into a fellow AppTrials Blogger James Scott.  His trail name is Friar Tuck, the most fitting of trail names.  He too had been hiking in the rain all day.  Covering himself and his pack with a yellow poncho he was not too pleased with.  As we passed him I immediately recognized him and introduced myself.  I had been following his trail updates as well as his trail preparation.  I can honestly say I was really excited to meet him.  He was and is one of the most positive and goodhearted people on the trail anyone could care to meet.  The evening at the shelter was filled with a warm fire, one hypodermic section hiker and her most likely soon to be ex boyfriend.  More on this in a separate post.  She’s fine, but of course it’s a story unto itself. 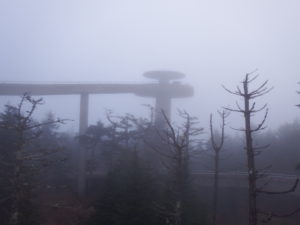 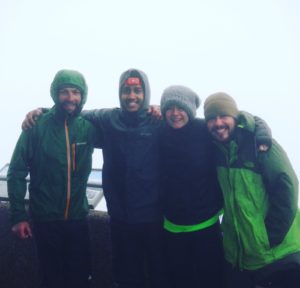 We attempted to catch a morning sunrise at Clingmans Dome. After breaking camp at 4 am and heading north we arrived at Clingmans in time to see two other tourists and fog dense enough to mask our disappointment. Although we did hike 11 miles before 10 am and made it to Gatlinburg for resupply and some hard earned 1 liter beers.

As I set off from the Newfound Gap parking lot I allowed myself to get distracted in conversation after sending an email to my backpack manufacturer. I did receive some free chocolate from the strangers though.  I left my Vargo BOT, stove, and spice kit on the stone wall where I unpacked my bag to take pictures to send to the manufacturer. When I made it to the shelter I had my first NBD(nervous breakdown on the trail) after I realized what I had done. Honestly, it took the good sense of some friends to talk me out of making the 10 mile walk back to the parking lot to go get it. It’s funny how one can rationalize adding 20 miles to their day when such an important, and extremely expensive part of their trip is gone. Luckily the friends I have been hiking with helped to make sure I could have hot meals for dinner until I can figure out how to fix my stove issues. 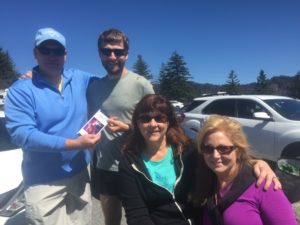 That evening I met Kid from New Hampshire and a large group of section hiking professional type men.  They had gotten together for many years to hike the various trails of the park together which they had nearly completed at this point.  Around 5 o’clock one of the men, an attorney from Chicago with braces on his bottom teeth took off his hiking shirt and announced it was cocktail hour.  He replaced it with a long sleeve button down plaid dress shirt.  Everyone had a laugh and joked about his civility in the woods.  He then proceeded to break out the fine, well aged, fancy bag of Merlot wine.  Which he drank from a Stanley aluminum cup.  I wasn’t too ashamed to join him for cocktail hour in my hiking shirt with a borrowed cup from Onterio for a few glasses to ease my pain of the lost cooking kit.  The man thoroughly enjoyed his fine Merlot.  So much that he ended up tripping over a hammock campers tarp tie down lines and into her hammock.  This was shortly after we watched him attempt to hang his backpack on the hanger by standing on a log in front of the fireplace.  He fell not once but twice in a row while standing on the log.  The term “ass over tin cups” was coined for just this type of spill.  Luckily the only thing hurt was his pride.

It took a few days but I ended up ordering a new set up from my friends at Vargo. They were sympathetic to my problem and really helped me out once again. They are first class for sure.

Once hikers leave the Great Smoky Mountain National Park the first stop is typically Stand Bear farm. Or as I like to call it Bazooko Circus. This place is a combination of the Lost Boys movie and Trailer Park Boys.  Both are excellent movies but no where i would prefer to stay for an extended period of time.  Lets just say its like the Las Vegas of the AT.  As I approached the hostel I watched a small rock fly over the hedgerow and my head, and land in the woods across the road.  It was immediately followed by 4 dogs racing to hunt it down and retrieve it first.  Including Blue and Riley.  Blue and Riley are two trail dogs I already had known previously.  The other dogs were a pair of speeding bullet Boston terriers that lived there.  Blue and Rileys’ owners left them there while they hiked through the SMNP. 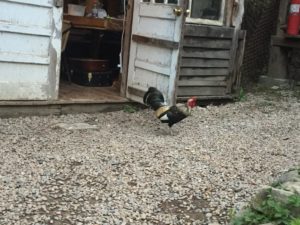 At Standing Bear Hostel I got a hot shower, clean sheets and a bed with a roof.  I also did a small resupply in their little shop based on the honor system.  They took credit cards which was pretty impressive for the small operation.  I met up with my Spanish friend Yellow Arrow.  Ninja Roll, Onterio and Bullseye were also there so we got to catch up on the rest of our trips over a few beers by the campfire that night.  But more about Bazooko Circus… Apparently the night prior to my arrival at Standing Bear was Lumpy’s birthday.  Lumpy was a caretaker of sorts that pretty much ran the place.  From what I could gather it was a pretty intoxicating celebration causing him to either quit or be fired.  So now the day to day operations are run by Morgan.  A younger man with long hair scraggly beard and several piercings, but not much experience running operations.  A woman from the west coast was hanging out for a few days doing trail magic and made everyone a large free breakfast of bacon and pancakes.  After watching “Pizza cat” the cat, a friend of the resident chickens, that seemed to be living in their open air kitchen walking all over the dishes and counter top, I decided to politely excuse myself back to the savagery of the woods and headed north. All in all it’s a decent place to spend a night if only for the resupply and story  alone. 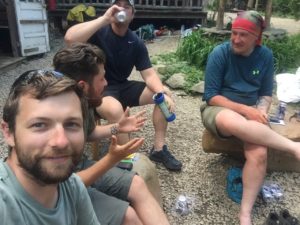