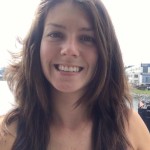 The oft discussed gear list. Do you have all the lightweight items?  What was your budget?  Since my preparations began, I have been trying to balance lightweight with budget, taking in to account the many items I already own. It’s been a struggle, with wanting to get my base weight as low as possible, but my pack will be notably heavier than many thru-hikers. I have adjusted my thinking throughout this process, realizing that I am strong enough to carry a 35-pound pack vs a 25-pound pack. It may not be ideal, but it is practical.

Starting ten months ago, my husband and I began selling and giving away nearly all of our belongings. We sold our furniture, pieces of artwork, Xboxes, chickens, clothes, cars, and eventually, our house.  Some people may call us Minimalists, but we call ourselves Memory Millionaires. We now travel around the United States in an RV, collecting memories rather than things. Spending money to replace gear I already have was no longer practical to me; I have chosen not to replace any of the items I already own with newer, lighter gear. My goal has been to spend as little as possible on items I need, while still choosing lightweight items where feasible.

I am going to go through each of the items I am packing, beginning with items I already had before starting this venture. 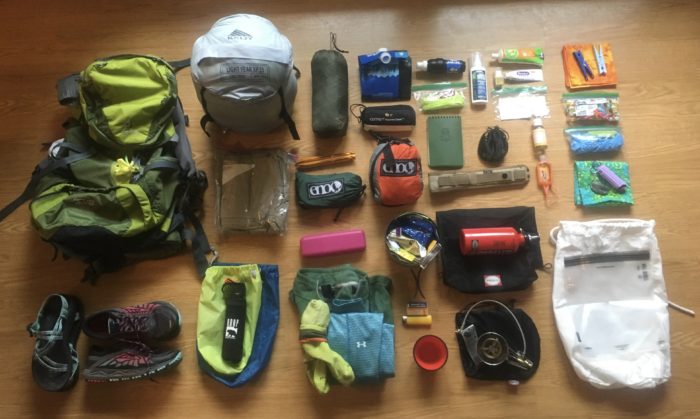 Deuter Pack I bought this four years ago for a trip to a music festival and have used it a few times for backpacking trips. It is familiar and fits me well, no need to change.  Cost is $0 for me ($180 new) 52-ounces

Kelty Light Year XP 20 (Long) This is my husband’s sleeping bag. He has owned it for about four years.  It’s lighter weight than my sleeping bag, so I’m borrowing it. This one is discontinued, but similar new bags range from $120 to $200.  39-ounces

North Face Women’s Glacier 1/4 Zip I will be using this for my camp/sleepwear. I received this as a Christmas gift two years ago, cost to me is $0, $55 new.  7-ounces

A four or five-year old Arcteryx hoodie. Except mine is too old to have the sweet ponytail hole.

Convertible pants, but I have had them for about 10-years and at some point lost the leg portion; now they are just shorts. I have no idea how much they cost when I bought them.  I bought a pair of the new version of the same pants from Columbia ($45), but the sizing has changed; the size that fits my waist is annoyingly tight around the zipper for the removable legs. For now I’m going to stick with these for shorts. 6.85-ounces

Smartwool Ski Socks Used for a few seasons of snowboarding, these are also part of my camp/sleepwear. My feet run cold, and I prefer long socks so that I can fold then down for a double-layer over my feet as needed. No cost to me, $25 new. 1.5-ounces

Darn Tough Socks (not pictured) I became a Darn Tough devotee two years ago.  These cost me $0 for AT prep, but cost $18-$20 new. They are well worth the price, and come with a lifetime guarantee. I hope to take a day off the trail in Vermont in order to visit their mill (and buy a few more pairs of socks, of course!) 1.3-ounces per pair.

Primus Omnifuel Stove My husband and I bought this for a backpacking trip three or four years ago.  $0 ($170 new) 15.9-ounces (without fuel). I am also carrying a Bic lighter and a box of waterproof matches.

Stoic Titanium Cookset (similar to this one)  Stoic brand has been discontinued, but I have owned this cookset for at least 4 years.  I ditched the pan; I doubt I will ever need a pot AND a pan, and it saves some ounces. No cost to me, but new this is around $50-$60. 18.4-ounces

A Black Diamond Headlamp, which cost $40 when purchased earlier this year.  3.2-ounces (not pictured)

Ka-Bar Knife If you plan to hike the Appalachian Trail, someone is likely to tell you to carry a gun. Many seem to believe the trail is a dangerous and lawless place, with muggers, rapists, and murderers. Or that a handgun will save me in case of a bear attack.  “No I will not carry a gun,” has drawn many wide-eyed looks. I already owned this, but a new knife can set you back anywhere from $10-$200. Don’t worry mom, I have a knife! 9.5-ounces

Bear Spray I’m from the Pacific Northwest and have done several hikes in the Olympics and Cascades. Bear spray is just something I’ve become accustomed to always hike with.  I already owned some, but a new canister will cost about $50. 12-ounces

That covers everything I already owned, so let’s move on to items I purchased new for the AT:

#1 most important item: Shoes!  I started with a pair of hiking boots, but after one 13-mile day I knew they were NOT the right option for me.  I have WIDE feet, and my poor toes were being pinched together. I spent an afternoon at our local running store and left with Brooks Caldera trail-runners. I bought two pair, at $140 each. They weigh 9-ounces, and feel great. I’m working in my second pair on the days leading up to my hike so they are ready when I need them. I also bought myself a pair of Chaco sandals, not specifically for the trail (I had just completed a 60-mile bike ride and had hours in town before I went home, I was not walking around town on a warm summer day in biking shoes!)  They cost more and weigh more than I had wanted for camp shoes, but after walking several miles in them, I am glad I got a pair of sandals I could actually hike some miles in over easy terrain. They cost about $100 and weigh 19.5-ounces for the pair. Since buying them, my mom’s best friend told me she’s owned her Chacos for 20 years and only replaced the straps within the last two years!

During REI’s Anniversary sale I was able to save big on a few items. First was my Patagonia Nano Puff jacket, which retails for $199, but I scored for $130.  I didn’t get the color I wanted (Gallah Green rather than Magenta), but for $70 savings I would wear a turd brown jacket.  A medium weighs 10-ounces. (not pictured)

For my camp/sleepwear I ordered a pair of Under Armor Infrared Leggings, which I hope keep me plenty warm on cold nights. They cost $50 when I bought last-year’s color, and weigh 7-ounces.

For rain gear I went cheap, lightweight, and far from stylish with Frogg Togg’s Ultra-Lite2 rain suit, only 10.4-ounces for $25.

SHELTER
I purchased a tarp for my hammock from Warbonnet, along with six stakes.  The tarp cost me $80 and weighs 17.5-ounces, with the stakes costing $9 and weighing 9-ounces.

HYGEINE/FIRST-AID/SURVIVAL
I also bought a Sawyer Squeeze water filter system at the REI sale, which set me back $40 and only weighs 3-ounces.

I bought two bandanas, green for snot and sweat, orange for a pee-rag. I’ve yet to try the pee-rag method, so some field-testing on the trail will tell whether it’s a method that will work for me. $4 and 1.5-ounces

Deuce of Spades trowel, because poop. $20, 4-ounces (not pictured)

Picaridin, insect repellent. I bought the spray rather than the lotion for ease of use.  3-ounces cost me about $7

I have not completed my First-Aid Kit, but have several items set-aside already.  I need to find smaller containers for diaper rash cream and benadryl.  I have Ibuprofen, Tylenol PM, Benadryl, Alka-Seltzer, Imodium, heartburn pills, fish oil, a multivitamin, and a clod/sinus medication.  I’m also bringing along nitrile gloves and self-adherent wrap.

MISC
I scored on the sacks I bought at REI as well; they were a previously opened item, so I got them for $13 rather than the $30 retail price. 2-ounces

I don’t want to completely ruin my husband’s sleeping bag with my stink, so I bought a Cocoon Silk Mummy Liner, a purchase I have yet to justify at $65 and 4.5-ounces.

I used my 20%-off REI-member coupon URSack bear bag. This may be a bit of overkill for the AT, but I plan to use it for future hikes in the PNW as well. Full price is $95 and it weighs 8.7 ounces. Bonus, it fits my cooking pot, utensils, and about five days worth of food inside. I also bought a pack of two Loksak Opsak for dry storage of food or other items as needed. The last part of this system is paracord for hanging bear bags, only $7.

Coffee is an essential part of my day. I went with the Sea to Summit X-Cup, since it’s collapsible and lightweight.  It set me back $12 at only 1.6 ounces.

DeLorme inReach Satellite Tracker. Mark, a man we met while camping in the Olympic National Forest convinced me this is superior to a cell phone.  DeLorme was bought-out by Garmin, so I saved quite a bit by purchasing an older model. It was a big expense at $260 and 7.2-ounces, however there are many features that justified the cost. A $60 monthly plan will get me unlimited text messages, SOS messaging, weather forecasts, and what is sure to make my family and friends very happy, MapShare, which will track my location online at preset intervals. (not pictured)

GoPro Hero, a cheap, no-frills GoPro, for capturing shots on the trail. Waterproof, with quick capture, only $110 when I bought it ($219 new), and only 3.9-ounces. (not pictured)

Music.  Tunes.  ESSENTIAL! I bought an old-model, refurbished, iPod Nano for my music and audiobooks. I didn’t know that this generation iPod came with a video camera, which I probably won’t use much, unless I want to get a quick shot without getting out my GoPro. I paid $50 for the iPod; iPod, charger, and headphones in a drawstring case weigh 2.5-ounces.

I want to be able to charge my iPod, GoPro, and Fitbit on the trail, so I bought an Anker Solar Charger which I can hang on the outside of my pack to absorb the sun’s power.  I got it on sale for $40 (regular price $70) and weighs 12.5-ounces.  Along with this I purchased a USB Battery Charger to charge my headlamp batteries on the trail.  $15, 1.6-ounces. (not pictured)

A Rite in the Rain notebook for journaling, $4 and 2-ounces.

A small pepper-spray, and a mini-multi tool round out my kit.

Items on the Chopping Block
2 Clothes pins, in case I need to hang something to dry.  Not sure if I will be needing these.

SheWee: it makes peeing a bit less messy, however I’m not sure it is enough to justify the weight and space it takes up in my pack.

Well, I think that’s everything.  If you have any recommendations I would love to hear them!  I am still working on my First-Aid Kit and completing my clothing purchases (I’m debating a pair of pants or just walking in workout leggings).  I have those two things and FOOD to sort out in the next two weeks.  Woo!

Thanks for reading! More to Come!
Megan 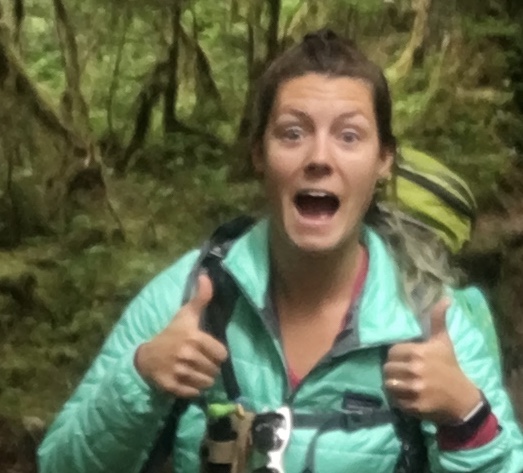