All the Gear and No Idea: My First Tests

Here is my first attempt to talk about every hikers’ favorite topic: hiking gear.

A lot of my gear hasn’t been properly road tested yet so for now I wanted to explain a bit about what I’ve got and why I’ve got it.

For a year and a half my thru-hiking plans existed only in my head, and in this time I didn’t make any physical, financial, or even verbal commitments to my hike. In August last year I started to panic. I felt I needed something physical to prove to myself that this hike was actually going to happen. So I made my first purchase toward my thru-hike.

What was this monumental purchase?

Specifically, Injinji liner socks. Inijinji makes toe socks with glove-like bits for each of your toes. The idea is that they reduce the likelihood of blisters forming between your toes as it prevents your toes from rubbing against each other. The style I bought are a thin liner sock that I’ll be wearing under more traditional walking socks. I blister easily and always wear liner socks when running so have tested these a lot and am loving them so far. Sadly, as a habitual odd-sock wearer I was disappointed to find that they only make these in one color so I can’t mix and match. 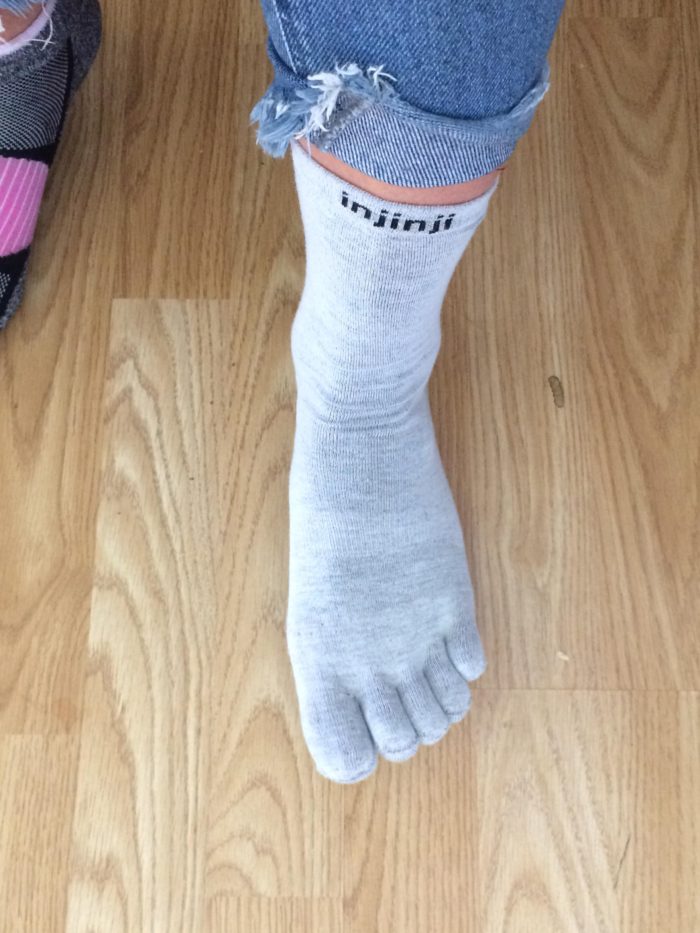 What they lack in style they make up for in comfort.

And my second purchase?

This time it was some Darn Tough hiking socks. These seemed very popular amongst other hikers and they come in loads of different colors so I felt they must be worth checking out. These are what I’ll be wearing over the Injinji liners. Again, so far so good.

The fact that I was living in France and had sent my socks to my home address in the UK so couldn’t actually use them for a month didn’t seem to bother me at the time. It was the fact that I was finally able to tick something, albeit a small something, off my ever-lengthening to do-list that was important.

But I Was Going to Need More Than Socks

All the hiking gear in my household is roughly 20 years old and although it has served me and my family well over the years I don’t think the word ultralight had been invented when this stuff was made. I’ve therefore had to start my gear list completely from scratch.

Who knew there was so much gear out there? I’ve lost whole days to gear research. The biggest thing I’ve learned is that hikers love to talk about gear. The internet is full of gear lists, reviews, and comparisons. The difficult bit is that each hiker has a different opinion, there is no definitive “best” piece of gear as it depends on so many variables. Every time I think I’ve made a decision to buy something I stumble across another cool alternative. Gear research could literally go on for ever.

As my start date draws nearer I’ve finally stopped researching and started spending some money. Well, I’ve actually spent quite a lot of money. I was initially aiming to spend around £1,000 (about $1,300) on gear. I think I’m now in the region of £1,500 ($1,900). It’s been hard to break my usual habit of “just buy the cheapest one” but I’ve allowed myself to spend an extra bit of money on my main gear items.

As of last month I’ve got my big three (tent, pack, and sleep system) and I’ve finally committed to a pair of shoes. I’ve still got a few little things to buy but it feels good to have an almost full pack. All that’s left to do now is to work out how to use it all.

As a Christmas present from my parents I received my pack (thanks mum and dad!). I’d originally been tempted by the Osprey Eja but had read in a few reviews that the shoulder straps were thin and became uncomfortable when carrying heavy loads. I also didn’t like the fact that it didn’t have hip belt pockets. In the end I went for the Osprey Ariel 55 Although a fair bit heavier than the Eja it has more padding around the straps and has those all-important hip belt pockets. Once on trail if I decide I want to ditch some weight, the removable top compartment means I can easily lighten my load, but would lose a bit of volume in the process. Another appeal of this pack is the J-zip down one side that allows me to access things without having to dig down from the top. 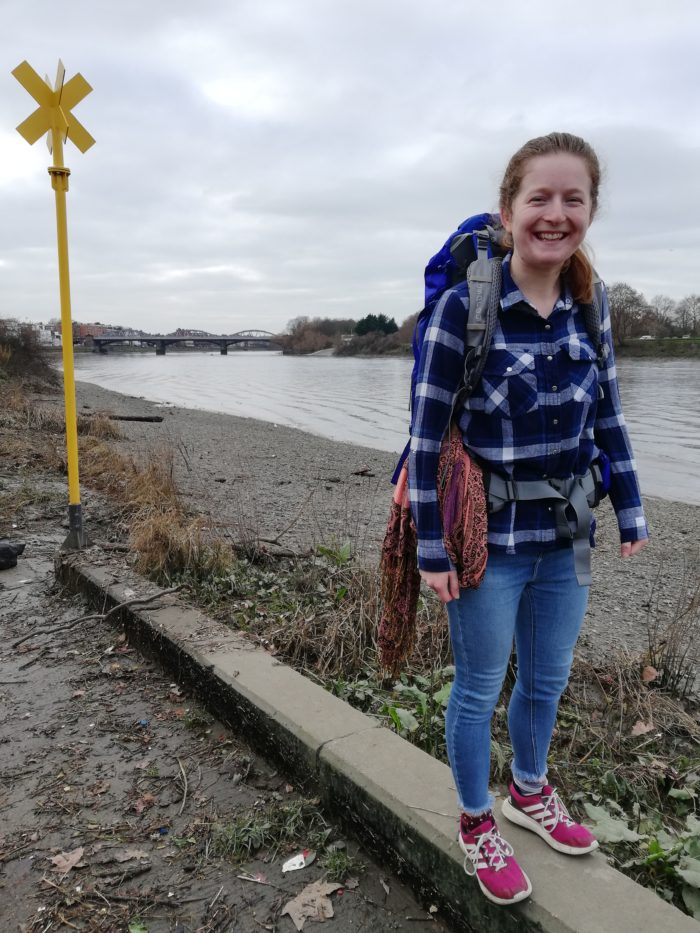 Taking my pack for a walk along the Thames. (Thank you Zoë for letting me walk with you and taking nice pictures.)

Having had a very busy few months the first time I was able to take my pack outside of my house was on a trip to London to visit some friends. I know walking around the flat, tarmacked London streets is no comparison to hiking a trail but my initial aim was just to get used to walking around with weight on my back. I’d intended just to carry it with me when walking around the capital but was pleased when a friend suggested we take a Sunday stroll along the river Thames. She didn’t seem to mind me cramping her style by carrying my massive pack around all day. It also proved a useful shopping bag when we popped to the supermarket on the way home. Overall it was about a six-mile walk on completely flat terrain. This was a definite Sunday stroll, but as I said, I had to start somewhere.

The next day, when returning to Kings Cross Station, I decided to get off the tube a few stops early so I could use the notoriously long staircase at Covent Garden tube station. I thought it’d be good to remind myself what walking uphill with a pack on actually feels like. Fifteen stories worth of stairs later I was definitely feeling the burn.

Since then I’ve done a few walks in the countryside near my house. I live in a very flat area with lots of fields and not much else. I’d therefore always dismissed my surroundings as pretty boring in terms of good walking routes. I’ve been surprised to find that not only are there several well-marked local walking routes but that I’ve actually enjoyed exploring them and seeing my local area in a different way. One downside is that the mud round here is pretty much clay so walking through it feels like walking in treacle. 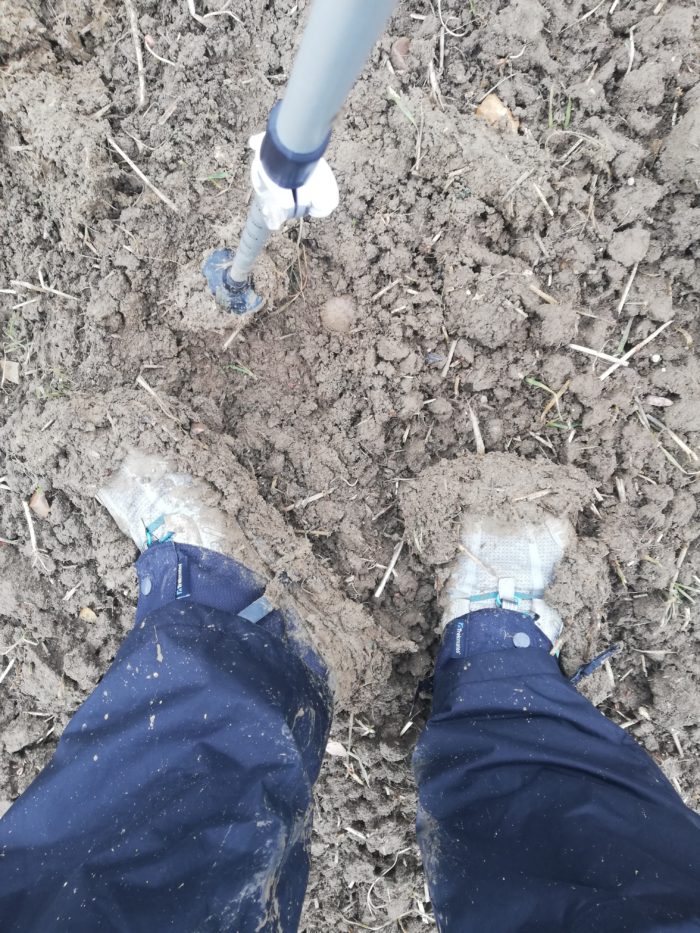 So far I’m loving my pack. I’ve had a bit of rubbing from the hip belts but I think that is inevitable. The biggest thing I’ve learned is not to wear anything with thick seams on the hips; in London I was wearing jeans, big mistake. The anti-gravity system seems to work wonders, and I can barely feel anything on my shoulders. Hopefully that’ll still be the case once I’ve got a couple of days worth of food in there. The stretchy side pockets are really useful for things I want to access quickly. Though I am still working on a technique for getting my water bottle out without having to take the pack off; my arms just don’t seem to bend that way.

On these walks I’ve also been testing out my chosen footwear, the Altra Lone Peak 4s, and of course my beloved socks. I’ve now bought second pairs of both the Injinjis and Darn Toug’s because I like them so much. Having spent much of my childhood trudging around in uncomfortable, heavy boots, I knew pretty early on that I would be going for trail runners rather than boots. I was toying between Altras and Salomons for a while, but as I have wide feet, the wide toe box of the Altra’s swayed me in the end. These have the increasingly popular zero-drop feature (designed so your toes and heels sit on the same level), so while they aren’t stiff boots that require breaking in in the traditional sense they do require a bit of an adjustment period for your muscles to get used to walking in them. 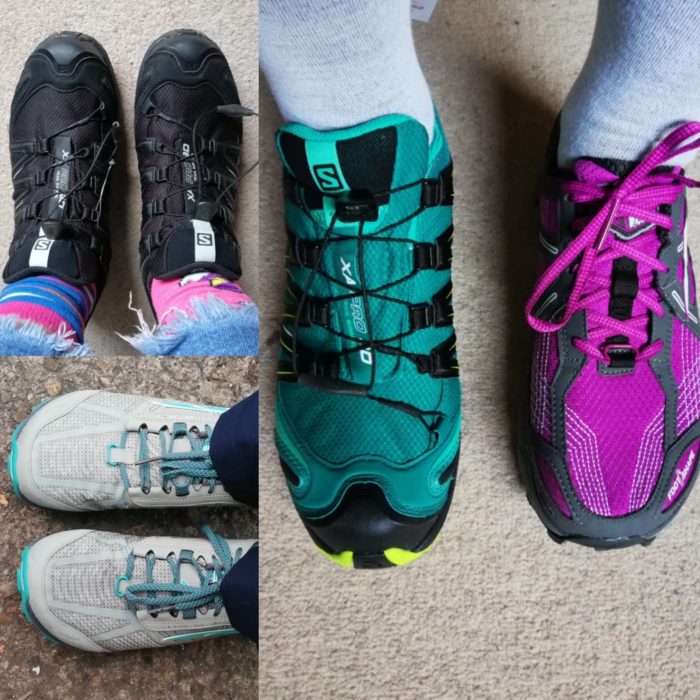 So far, they are living up to the hyp., I think they may be the only shoes that I’ve ever walked in for more than a couple of hours without feeling any rubbing. I initially wasn’t going to go for non-waterproof shoes, but having worn these a couple of times I’m really glad I did. If it’s raining a lot my feet will inevitably get wet but it’s nice to be able to walk on wet tracks or through wet grass without getting wet feet.

That’s All for Now

It’s still early days for me and my gear and I can’t wait to see how it all performs when I finally get to go out on some hills. I’m sure my gear list will change over time as I learn what works for me, but for now I’m pretty happy with the choices I’ve made.

Keep an eye out for the part two of this post when I’ll be talking about how I got on spending my first night in my tent.