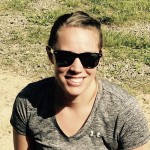 With about two and a half months until my start, I thought it was about that time to go through what I have and figure out where my holes are. Literally and figuratively.  So here goes:

Over the past three years, I’ve dropped Salomons in favor of a wider toe box, which I found in Altras. There was a brief period during which I tried Trekstas but found the outside didn’t fit my foot well and the mesh ripped through within 150 miles. Which was disappointing because they were comfortable. Like, really comfortable.

In addition to having a wider toe box than a lot of brands out there, Altras are also a zero-drop shoe, which means the heel and toe are the same distance off the ground.  When I first switched, I didn’t notice a difference until after my first five mile run in them and my lower calves and arches were sore, so I overlapped a couple weeks of using both Salomons and Altras to transition. I use the Superiors for indoor training and shorter trail runs. For ultras and other hikes, I use Lone Peaks. I liked the 2.0, but my pair recently reached critical miles on them and I replaced them with 2.5s. So far, so good. I plan on using them for the duration of the AT. 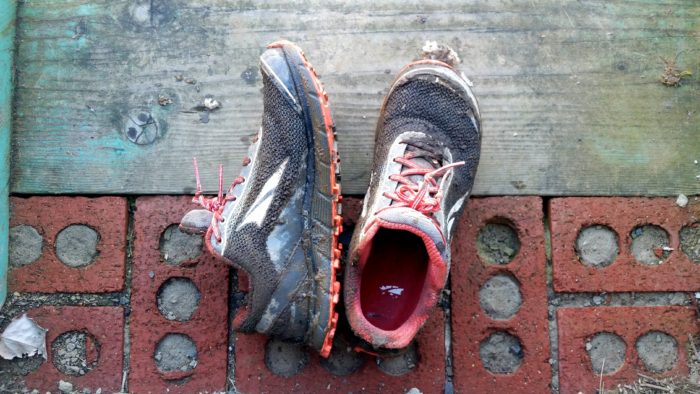 Taken after a muddy run, but you get the idea.

Ah yes, The Pack. The iconic image of backpacking (see, right there in the name) and one of the most thoroughly researched and reviewed piece of gear among the outdoor community. For good reason: a thru-hiker has to spend a long damn time carrying it from one end of the country to another. It helps if it doesn’t fall apart and you have to rig together a new strap out of a plastic bag and duct tape. I’ve never done that and to be honest, I don’t even know if that would work, but it doesn’t sound fun to try and figure that out in the middle of the woods.

I have about 4,500 miles on my Osprey Exos pack and I nearly accepted we were closing in quick on retirement. But then I remembered: Osprey has the All Mighty Guarantee. This is a lovely offer that states: “Osprey will repair any damage or defect for any reason free of charge – whether it was purchased in 1974 or yesterday.” Here, see for yourselves.

Pretty sweet deal for one of the most important pieces of gear, am I right? I have a couple holes, mostly in the mesh, and one strap has seen better days, so this seems like the logical choice. I briefly looked at other companies, lighter packs, guarantees of this, that, and the other thing, and not to say that they aren’t good packs and good offers, but I figure why switch something that’s been working perfectly fine for me for four years? 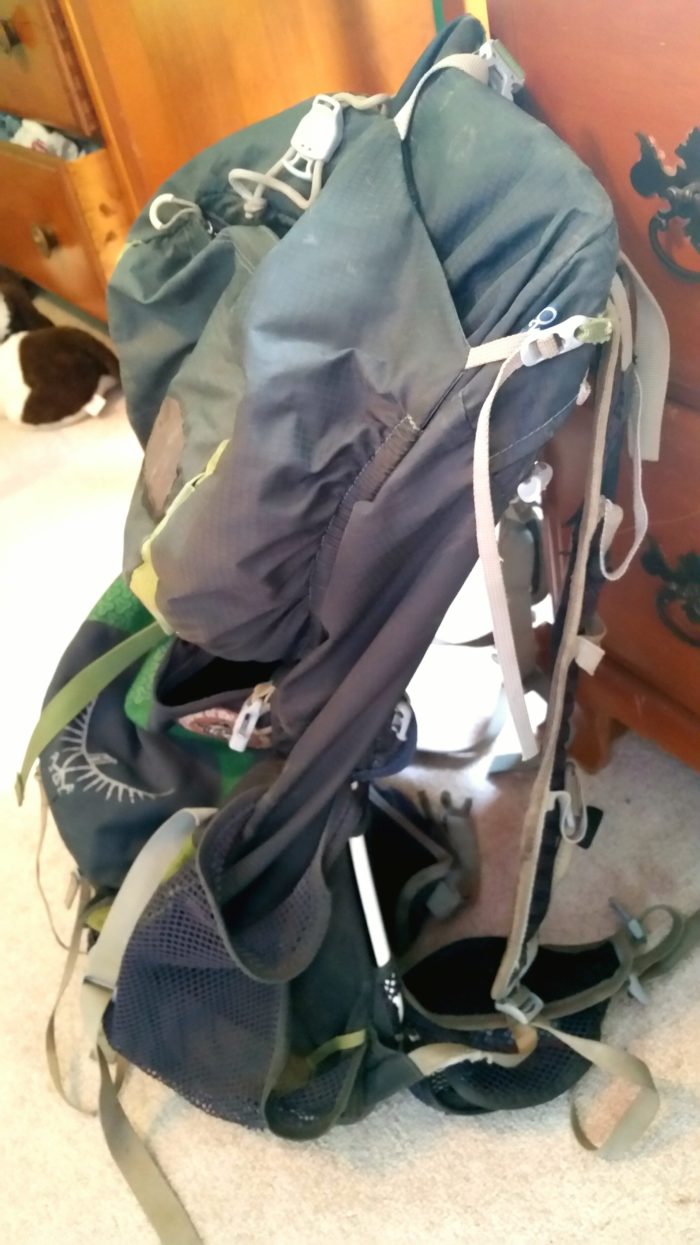 I haven’t decided what to do about my shelter yet, my debate being between a tarp and a bivy because of my consistent access to shelters. I have a Big Agnes Fly Creek, but that’s not in the running right now, again because of the access to shelters. My tarp is the Gatewood Cape from Six Moon Designs, which I trust to take on a lengthy hike again. It has a wide base for heavier rains so the the splash underneath doesn’t reach me and my bag, but it doubles as a poncho so the hood is at the top. It’s designed to cinch down to keep out rain and 90% of the time it worked for me, but when high winds were added to the rain, I got a small puddle on one side of my sleeping bag. One storm soaked other hikers’ fully enclosed tents, so I didn’t count it much against the production of the Gatewood Cape.

The down side of a tarp is that you get up close in personal with the dirt, and the things that live in the dirt. Take for example the night in central Oregon when I woke up to feel something crawling on my leg so I reached down and grabbed it. It was about the size of a quarter, furry, with way too many legs and I remember thinking, “Don’t open your eyes, don’t open your eyes,” as I pulled that thing out and flung it as far as I could into the dark landscape (sorry, little buddy).  I think we can all put two and two together here, but because of that, I can always reserve the right to believe it was only a leaf. A girl can dream.

Anyway, I’d like some sort of version of open air to sleep in, but I’d also enjoy not sharing it with the local insect and/or arachnid life.

20 degree down Western Mountaineering. I like to be warm … still, even after my run. I’ll use it with a silk liner. This is an argument for a bivy though, to keep myself protected from the bugs if I have to sleep with it open every once in a while. 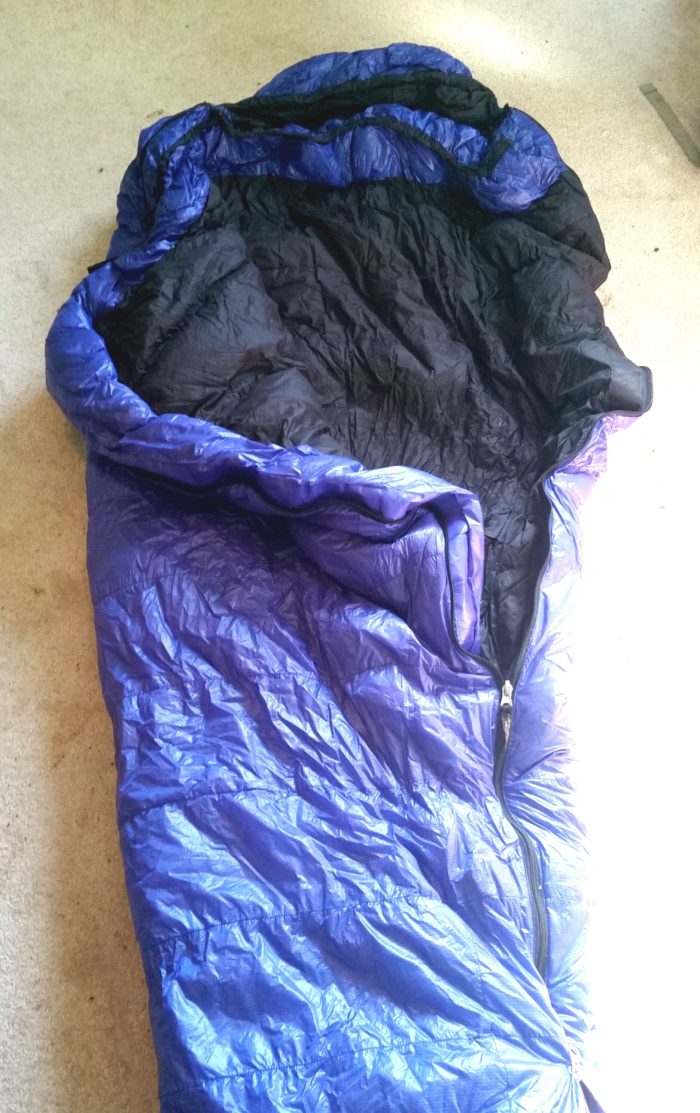 Synthetic shirt of some kind (I’ve used an Under Armour T-shirt often), running shorts, Dirty Girl gaiters, buff, long sleeve synthetic, a couple pairs of underwear and bras, pants …TBD, handkerchief, and my Patagonia half-zip synthetic puff jacket. I got it four years ago, and it still holds its warmth. I love it so much but it has the, uh, thru hiker aroma so I can’t wear it in public without getting some odd looks and crinkled noses. I just love it so much, though, that I recently bought the Patagonia Nano Puff half-zip so now I have one for hiking and one I can share with the civilized world. Win-win. I ordered it from Moosejaw and even got a pretty rad confirmation email and bumper sticker. It’s humor in unexpected places that gets me, so shoutout to you, Moosejaw, for making my day a little brighter. 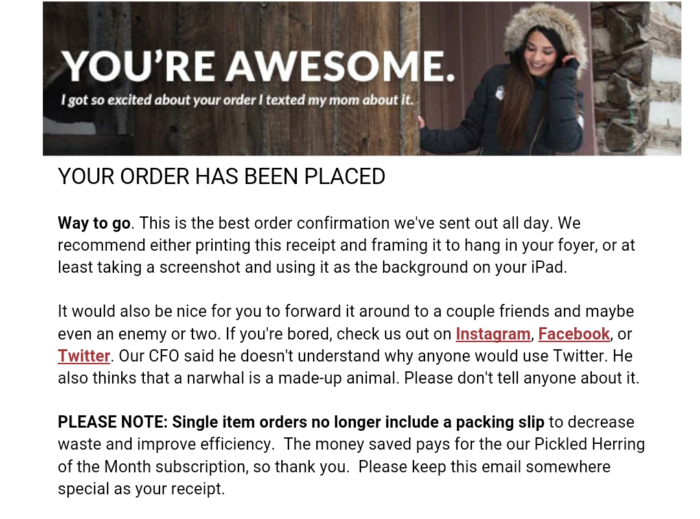 I’ve been going back and forth with these, too, because I don’t really like them, and other than stability in snow, they’re kind of just there for decoration the way I use them. I’m like the lazy kid on the ski slopes dragging them along behind me. Right now I’m thinking to start without them, and maybe ship some out before I get to Vermont and New Hampshire. I don’t know, maybe I’ll get them earlier, or maybe I won’t take them at all. Either way, my arms will probably wither up by the time I get to Maine due to lack of use.

Have one, not going to take it. Let the days of soaking couscous begin.

Therm-a-Rest Z-Lite Sol sleeping pad, Aquamira drops for water treatment, Marmot rain jacket, garbage bag for pack liner, Sea to Summit dry bags. There will be more in the “Other Stuff” category, but that’s about all for now.