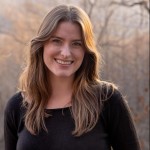 Georgia: The Land of Many Zeroes and Lessons Learned 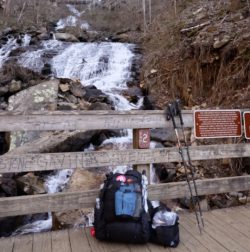 Hi all! Newfound here with my first update from the trail. I am way, way behind the “writing schedule” I’d envisioned for myself before starting the trail, which is hilariously in keeping with the theme of my thru-hike thus far.

I think I’d hoped to get weekly or at least biweekly updates out, but for now, it’s looking like I’ll be rounding up my trail updates state-by-state.

So, here’s to Georgia. The PUDs, the trail magic, the mud, the knee pain, the gorgeous sunrises, entirely too much Ibuprofen, (did I mention knee pain?) …and the sound ass-kicking I came out here for. 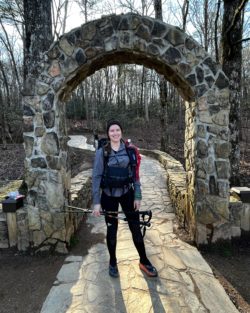 On day one, my boyfriend dropped me off at the Approach Trail, we took the requisite arch photos, and I basically skipped up the stairs to the top of the falls in high spirits.

It was a beautiful day, and I was feeling great after a last-minute, frantic Airbnb shakedown that whittled a startling 4lbs off my pack weight. I was feeling great, mentally and physically, and continued past Springer to Stover Creek Shelter for 2.8 AT miles.

On day two, I woke up and hiked 12.9 miles to Gooch Gap Shelter, leapfrogging with another hiker, L., most of the day. In the middle of the day, we ran into the ridgerunner who’d registered me a couple days before (and had given me the stern talking-to about my pack weight that had inspired the 11th hour Airbnb shakedown.) He told us that Sassafras Mountain, the worst climb of the trail so far, was ahead… but on the other side, trail magic was waiting for us at the next gap. This motivated us to climb Sassafras at what felt like a dead sprint, and by the time we cruised into the gap for our Oreos, chips, and cokes… my left knee was beginning to make its unhappiness known. 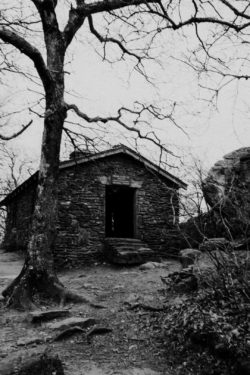 On day three, I woke up early, and L. and I started on trail before sunrise. We were facing a dilemma – rain was coming, and we were rapidly approaching a bear canister-only area that we could only hike through since we had bear bags. We had tentative plans to get off trail at Woody Gap and go into Dahlonega, though neither of us wanted to get off trail that early. While we were deliberating over trail magic hot dogs at the gap, another thru-hiker named B. materialized out of nowhere and told us that he had a cabin at Neel’s Gap that he was hoping to split with at least 3 other hikers. L. seemed game, and I was Not Ready to get off trail… so mentally told my knee to behave itself, put on my knee brace, and we started hiking.

As we walked into Neel’s after a grueling 15.6-mile day, my knee was making its protestations loud and clear. No amount of Ibuprofen, bracing, or hobbling would placate it. B. and another hiker he’d picked up, S., were waiting for L. and I with pizza, which helped morale since I knew that at least one zero, if not two, were in my future.

Double zero time – the first zero, day four, was at Blood Mountain Cabins with the rest of the group, where I did laundry and resupplied at Mountain Crossings, and day five’s zero was in a hotel in Blairsville. I learned how to tape my knee properly and basically sat with my legs elevated and ice on top of the offending knee for most of those 48 hours. My knee started to feel marginally better – I’d had the same type of pain in my other knee years ago and remembered the PT for it, so between icing and elevating I was stretching and exercising it as much as I could.

On day 6, I shuttled up to Neel’s and hiked to Whitley Gap Shelter for a slow 6.6-mile day. My knee alternated between feeling great and fussing me, but I was happy to be on trail and did PT in my tent which helped. 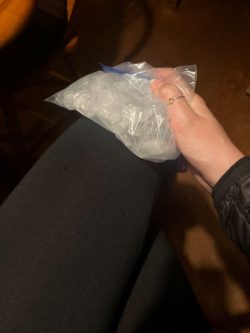 Days 7-9: Slow and Steady… Into Another Zero

On day 7, I hiked from Whitley Gap Shelter to Low Gap for a 5.9-mile day. Found awesome trail magic at Hogpen Gap and ran into Queen Diva, who’d done trail magic at Woody Gap the fateful day I decided to hike into Neel’s and hurt myself.

On day 8, I hiked from Low Gap to Blue Mountain Shelter for a 7.3-mile day. My knee was very unhappy with the Pointless Ups and Downs, and I decided to hike into Unicoi Gap the next morning for a zero in Hiawassee with a couple other hikers I’d met – Sugarbear and T.

Day 9: hiked down to Unicoi and grabbed a ride into town. Did laundry and resupplied at Ingles. Put the knee on ice.

On day 10, I left the hotel in Hiawassee and hiked from Unicoi Gap to the Swag of the Blue Ridge, for my first night solo camping and hanging my bear bag on trail. This was a little over a nine-mile day, and my knee was feeling great. I was unexpectedly anxious about sleeping alone, and my nerves kept me up until I decided to wear my earplugs so I couldn’t hear the night critters.

Day 11 was my last day in Georgia! My knee was feeling great, so I coordinated with my boyfriend to get picked up from Deep Gap, NC instead of Dick’s Creek Gap, GA as we’d originally planned. (We’d planned a long weekend in Franklin before I got going, and I’d hoped to make it to Winding Stair Gap… which clearly wasn’t going to happen with my knee troubles.)

I hiked from the Swag to Plumorchard Gap Shelter (12.1 miles,) and stayed inside the shelter instead of camping for the first time since there was rain in the forecast – and I was planning on hiking a longer day the next day to make it into NC to be picked up at Deep Gap, and packing up would be faster if I didn’t have to worry about my tent in the morning.

On day 12, I left first thing in the morning and hiked into a rainstorm – which let up right as I crossed the border into North Carolina! The day’s total was 11.3 miles, and I pushed myself a little too hard so my boyfriend wouldn’t have to wait too long on me at Deep Gap (my poor decision-making, not his.) I’d always been able to bear weight on my knee while it was hurting, until the last 2 miles of this day… it decided that it was done-done. 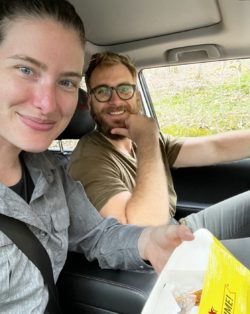 My boyfriend walked up trail about 1/4 of a mile to meet me and motivated me to walk through the Return of the Knee Pain by informing me that he had Bojangle’s waiting in the car for me. We had two glorious zeroes planned for the weekend, so I wasn’t too troubled by the knee pain since I knew it was about to get all the R&R it needed.

Lessons To Carry Into North Carolina

Georgia taught me many things, but one very valuable lesson: my first priority has to be my body. Not my hike. Not keeping up with friends or crushing miles; as wonderful as those things are, there will be time for them later. The most important thing is listening to my body – because without it, I can’t walk a single mile.

I learned this lesson through big things, like the knee pain, and small things, like no longer making “deals” with myself to hike over the next mountain before “rewarding myself” with a break, a snack, or more water.

In Georgia, I learned to manage expectations, take breaks whenever I damn well pleased, walk the blue blazes, and slow way, way down. At the end of the day, I’m incredibly thankful to be out here and can’t wait to see what North Carolina has to say to me.