I Get High With a Little Help From My Friends

I haven’t yet read Bill Bryson’s book about hiking the Appalachian Trail, but I have to assume he didn’t hike much in southern Maine or New Hampshire. I say this because he chose to title his book “A Walk in the Woods”  and I haven’t seen much trail here that qualifies as “walking,” indeed on my most bitter and cynical days I’d hesitate to refer to some of this with the label of “hiking.” Maybe “Beaten Senseless by Rocks in the Woods” doesn’t sell as many books as a title.

Every time I think I’m done making jokes about how rough the terrain in Maine gets, I find myself staring at another pile of rocks with a White Blaze painted on it, like the worst Adam West-era Batman villain ever has been let loose. He’s got an incredibly convoluted plan to take over Gotham City by rerouting the hiking trails and charging millions of dollars for fixing it. (in my mind this character will be played by a high class actor of yesteryear following the cues of Vincent Price and Burgess Meredith to Batman ‘66. Humphrey Bogart maybe?) 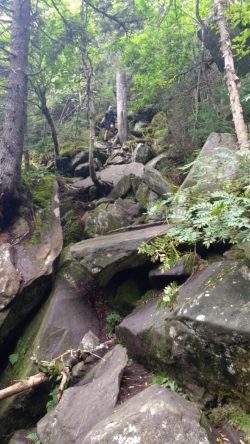 “Haha Batman, you will never defeat The Blazer!”

Anyways, yes Maine got a few good licks in as I made my way out of the state, and New Hampshire has greeted me with a lot of “Welcome to your new state, same as the old state” feelings. Mahoossuc Notch of course is the most glaring of these experiences, but I’m debating making an entire post about that, so we’ll leave it aside for the moment. 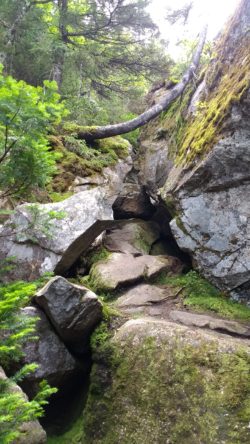 I had one of the more terrifying experiences with this notion while climbing up Little Bald Pate Peak. This area seems to love a particular flavor of terrain that consists of a flat rock slab. Normally this isn’t too terrible, it’s a lot like walking on sidewalk. On this particular peak however, it is of a steep variety. At one point, someone mounted a rope into the trail to allow hikers to better scale the side of the mountain like they’re rappelling on the side of a skyrise building. The ante is further upped by the rain we had all day the day before, transforming the rock into what I like to call “the slip and slide of death.” As I’m slowly but surely progressing the peak, I lost my footing several times, only to grab an errant root or tree branch to halt my careening fall. I should probably feel bad about damaging the fragile alpine growth at this moment, but at the time I was too concerned with the small chores of not dying. This mountain has made several reappearances in my nightmares since.

Except in my nightmares, I’m climbing up this in my underwear and my History exam is waiting for me at the top and I haven’t studied

Somewhere in here, I must have begun to vocalize my distress more than I was expecting. I will admit the vocabulary I was using was far less civilized than I should be proud of, a combination of foul language and proto verbal grunts. This cacophony summoned another hiker back to check on me. His name was Not Yet, and he descended from the summit like a Buddha offering wisdom and guidance. He originally offered to give me a lifting hand, but couldn’t reach me from the summit cliff. Instead he pointed out hand holds I couldn’t see from my vantage point, and more importantly shouted words of encouragement. While having a sherpa magically appear and take my pack would have been beautiful at that moment, I cannot express enough how much I sincerely appreciated his kind words and cheering on from the top. I wouldn’t have made it to the top of the mountain without him.

Not Yet, seen here being the hero the mountain needs, but not the one it deserves

Another moment that sticks out in my mind was Goose Eye East Peak. I was feeling pretty good about my hiking prospects that day until I came to a rock wall which stymied my momentum. I found myself staring at the wall trying to discern how I was supposed to get up for what seemed like hours. (reviewing my notes, it was likely fifteen to twenty minutes) I could spot the various foot holds being used by other hikers to scale the rock, but about halfway up, there was a space between the foot holds that my stubby short part japanese legs simply couldn’t span. I slid back down to the bottom of the wall and stared some more, until a pair of hikers named Early Bird and Trail Master came by. 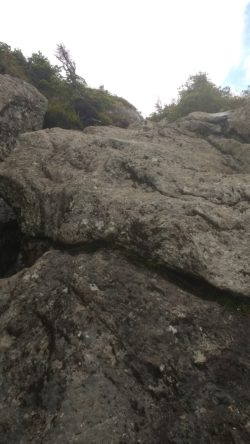 Dear trail clubs. If you could test out your trails with some short people, that would be great

At first, I stepped back to let them go ahead, hoping I’d see where they were putting their feet and get a better idea of how to proceed. Unfortunately, they had the same problem I did. After chatting for a bit, they came up with a plan to boost each other up, then use the ropes for their bear bags to then pull their packs up. They very kindly offered to include me in their plan, and we were able to successfully complete the scheme with my only feeling some brief guilt for subjecting them to my oversized pack. 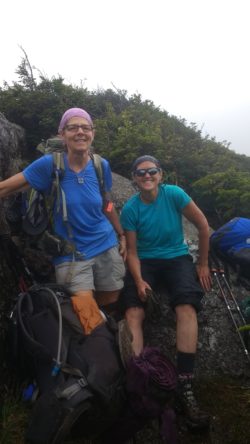 When I finally got to the town of Gorham, I was pleasantly surprised to meet the Jays, a nice couple I’d met via Facebook who were headed north. I’d enjoyed their blog before leaving for my own hike, and they’d read my blog last year while getting ready for theirs. I thoroughly enjoyed getting to meet and to get to know people I’d previously only known as words on a screen. It also helped that the White Mountain Lodge is a wonderfully comfortable place to stay. A shower, clean clothes, and town food is the best cure for the trail blues.

These past few days on the trail have been hard, and I find myself thinking more often about the possibility of going home. When I reflect on these moments of kindness and assistance from my fellow hikers however, I hope it’s not time to throw in the towel just yet. Through all the places I’ve lived and all the communities I’ve lived in, there is nothing like the trail community for helping and supporting each other. Encouragement, a friendly face, or just a good old fashioned boosted leg up, all are gifts the Trail can provide. Mountain tops are hard to get to, but I get there with a little help from my friends. 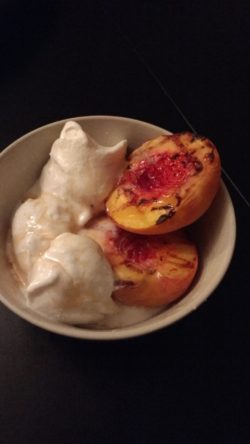