After a Spanish type breakfast (toast, a little juice, coffee or (for me) hot chocolate), we started hiking October 15th while the stars were still out, but fading.   It was COLD, upper 30’s. So we walked briskly.

Apart from a cold first couple of hours, it was a beautiful day, nothing but blue skies. In the late morning we had a wonderful second breakfast – – – this time of eggs, bacon, ham, bread, plus a hot drink, and all this for just 5 euros (less than $6). This was in the town of Hospital de Orbigo, where is found the famous bridge of Orbigo, https://www.pilgrimpathways.com/pilgrim_pathways.asp?IdSeccion=1&IdNoticia=44 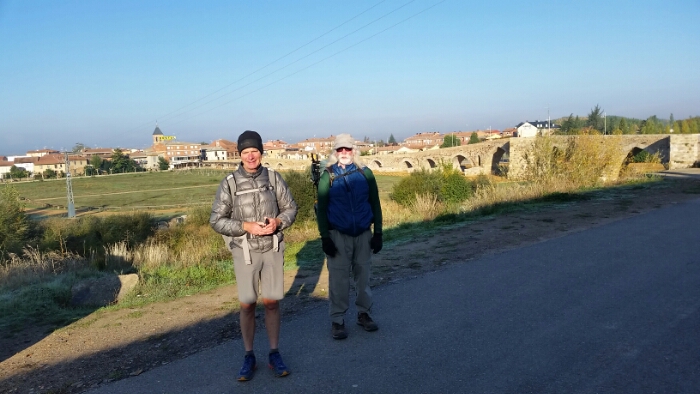 From there we chose the slightly longer route option to our goal for the day of Astorga. This route took us away from the highway and into more rural areas. At one point in a small town we passed a fellow on a sort of ancient bicycle with the rear wheel on a stand and the front portion converted to be a sort of grindstone. He had a basket of assorted knives which I presume he had collected from around the village, and he was thus sharpening them, one by one. All the while having a running conversation with another fellow standing next to him.   I suspect this sort of rural scene is quickly dying out, so I was pleased to see it, and even interact slightly. 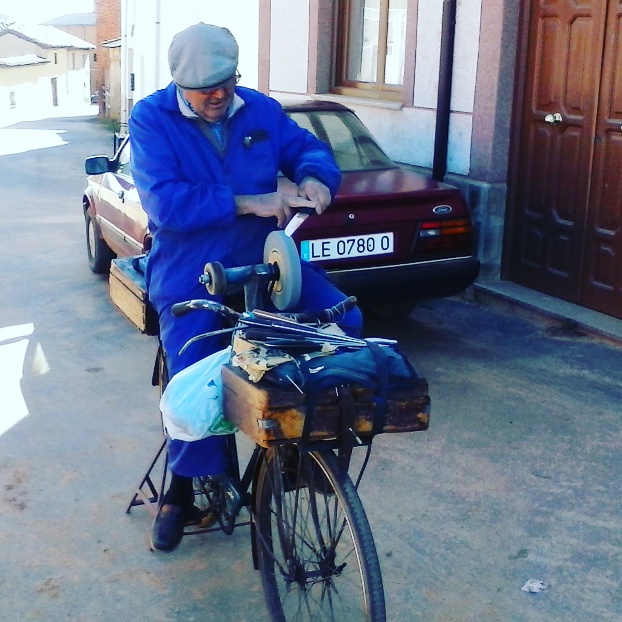 Shortly after that I saw some cows in stalls, and a little beyond a row of what looked like oversized pet carriers, a couple with calves inside.    I’m a city boy, so I thought to myself, “Oh, this is what Spaniards use to take a pet calf along on vacation”.    Okay, so I didn’t really think that, what I really tried to think of was just anything besides “Where does veal come from?”   The calf was cute. 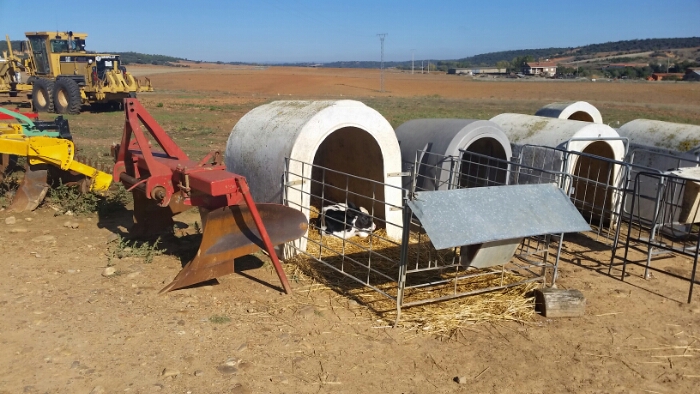 We got into Astorga around 2 pm, having walked about 19.5 miles. Given our long break, we thus Averaged over 3 mph. Which if you ever tried to keep up with Milky would be no surprise.

We checked into the Albergue at the far end of Astorga, close to the Cathedral and the Gaudí-designed Episcopal Palace. Heinrich and Gut stopped in briefly, but decided to hike on another 5 km for the day. Along with them came a woman who lives on Bainbridge Island, which is my general part of the (small) world. 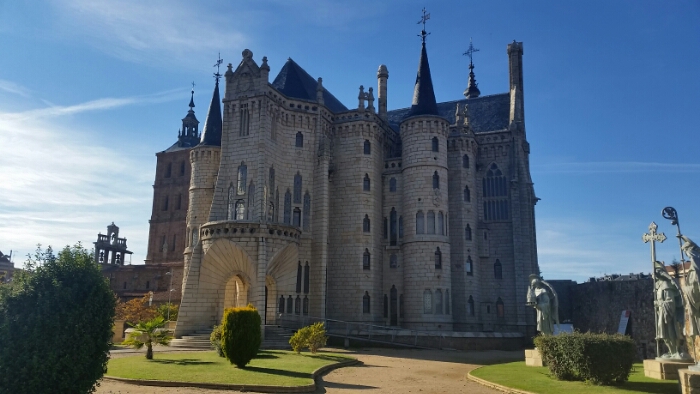 Lucky and Milky decided to just visit the grounds of the Gaudí-designed Episcopal Palace and Cathedral, but having missed the open hours last time, I paid a bit for a combined ticket to these things plus the Cathedral museum.  I found it well worth it. All true Cathedrals are incredible structures, and it was a real pleasure to get to see the inside of the sort of fairy tale castle that is the Episcopal Palace. Then Milky and I had dinner with Margaret (who we had met before), and Jam (who we essentially had not). I hesitate to say where these people are from, as in both cases the answer is pretty complicated. 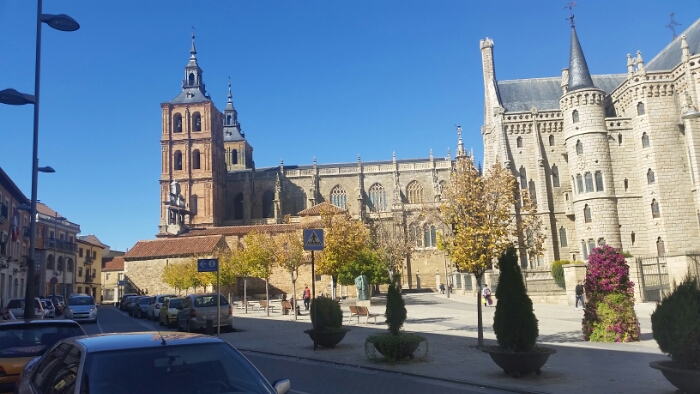 The next morning we got up a little earlier than planned because 3 fellows decided to get up a little before 6 am and languidly pack up with the approximate finesse of a herd of clumsy elephants, waving their bright white lights about as if they were drunken lighthouses.  So we got up (quietly) and got going.

Still cold, but not so bad, and this time I had my longjohns on, so no worries.

We knew we had some climbing to do, so we thought we might have a short day; instead we did 23 miles with about 1000 meters of elevation gain, about 3300 feet. 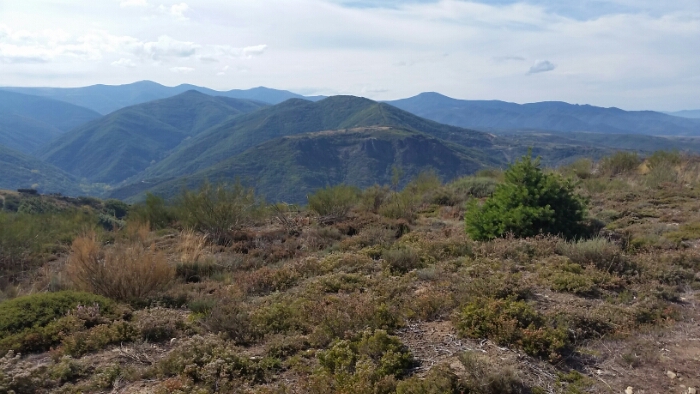 It was a great, if tiring day. Off road most of the day, a lot of green vegetation, a lot of views, rustic villages, and en route today we encountered the famous “cross of iron”. This attraction is, unfortunately, easily accessible by road, so that when we trudged up to it, it was swarming with car-tourists. Still, another famous Camino site we can check off. 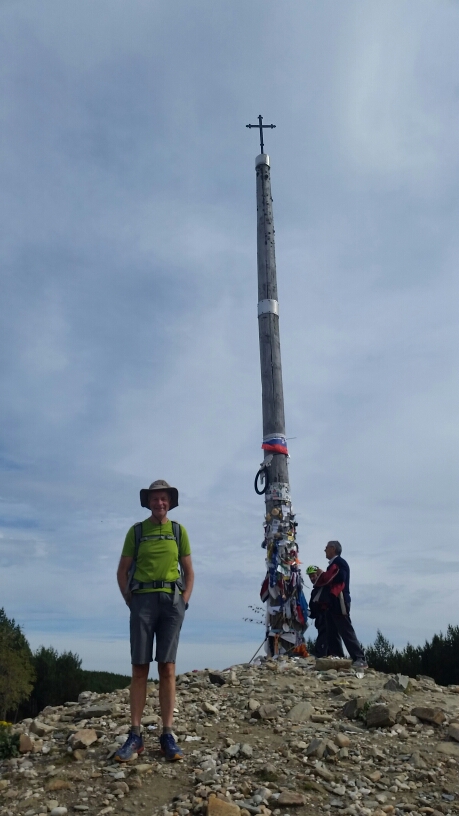 Milky in front of Cross of Iron

Another treat today came when Lucky suddenly said “shhhh”, and pointed to a fox ambling along the road, seemingly unconcerned about us, and I was pleased to be able to take a picture. I don’t think I’ve ever seen a fox in the wild before; who would have guessed this would happen on the Camino! 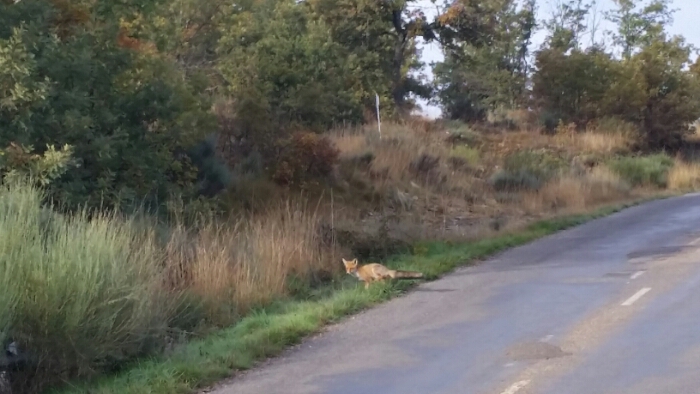 We stopped for the day in the little town of Acebo. Barring any surprises we should enter the community of Galicia in 3 days and be in Santiago in not much more than a week. 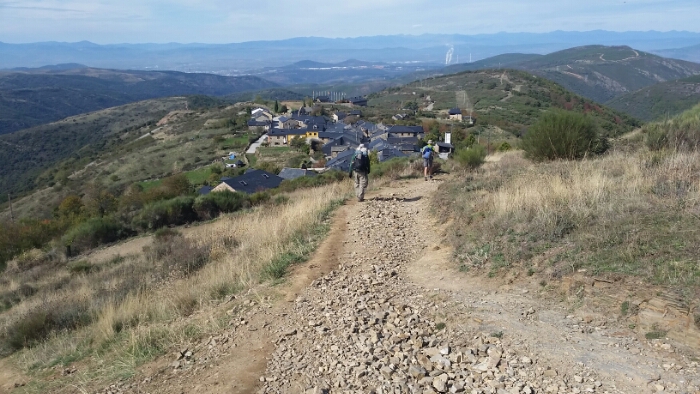 Heading down to Acebo

Unfortunately about a quarter of an inch of rain is forecast for tomorrow, but we’ve really had a pretty good run of weather luck, so no complaints.