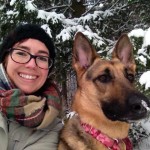 Getting Comfortable Being Uncomfortable

In my last update I was off the trail with a strained ankle. Since then I’ve hiked nearly 200 miles, made loads of new friends, been adopted into a tramily, survived hiking in a thunderstorm, showered in a waterfall, done yoga on some balds, and had little to no cell service. 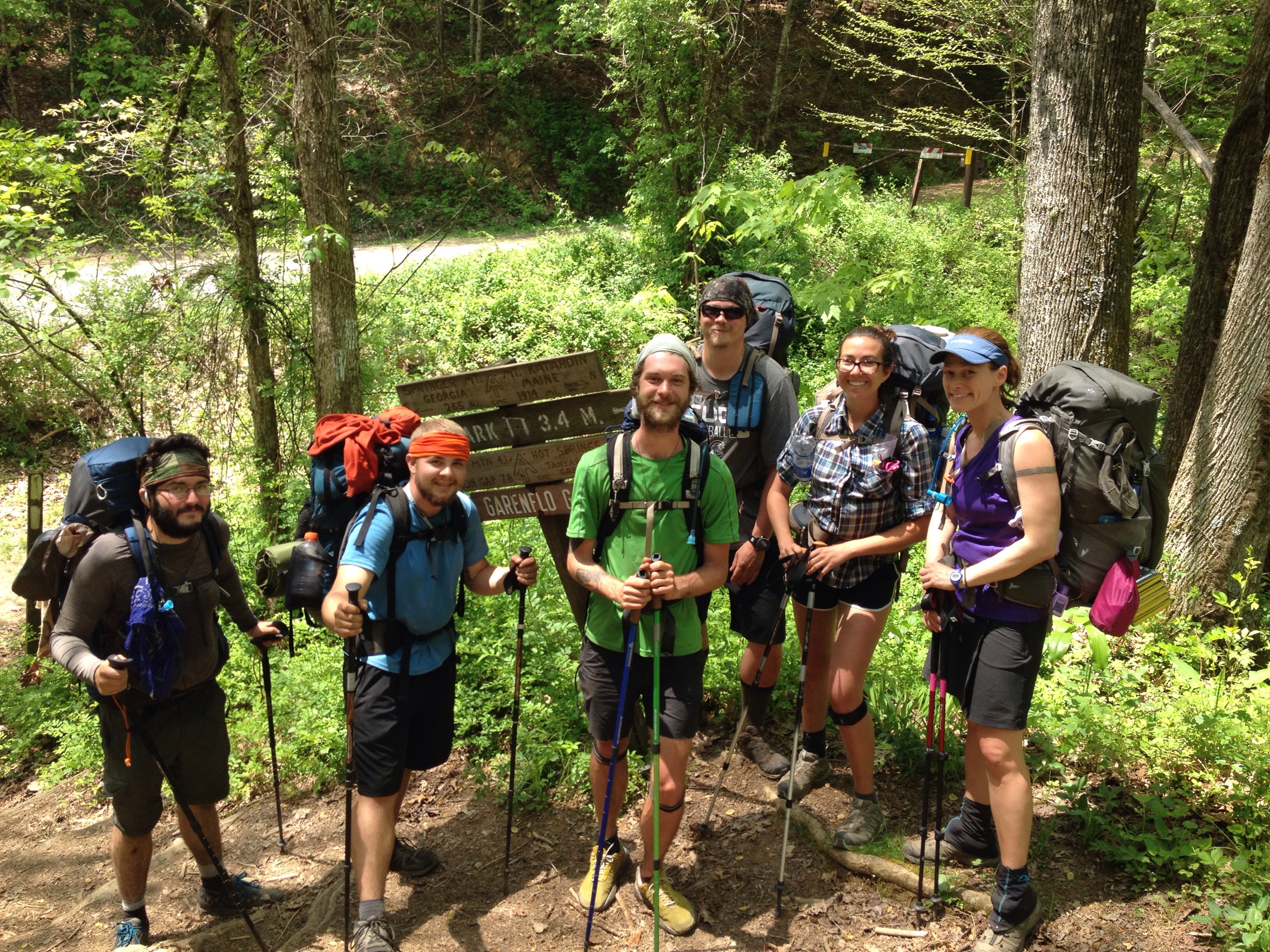 After a week off the trail I was feeling antsy to get going and didn’t want to wear out my welcome at my friend’s place, so she agreed to take me to a clinic to check out my ankle. After that she was going to drive me to either the trail or the airport. Reading about ankle injuries for a week had me just about convinced that I had a stress fracture and I was already making tentative plans to go southbound as soon as my ankle allowed. Lucky for me, an X-ray came back with no indication of a fracture. The doctor who saw me suspected repeated straining of my tendons was behind the pain, and after discussing how effing cool it was that I was hiking the trail, she said “You know, you can take up to 12 ibuprofen a day…” with a misty look in her eyes that I interpreted as “go forth and follow your dreams!” My friend drove me to a CVS to get an ankle brace and a fresh stock of vitamin I and then dropped me off at Yellow Creek Road to continue where I left off.

That first night back on the trail was tough. I went less than 3 miles and was totally exhausted. My pack was too heavy, I had no balance, I was winded by the smallest hills, my ankle was killing me, and I was limping along at a snail’s pace. When I started I was about a mile out from the first shelter. I had planned on stopping there but it looked crowded. Not just crowded, but full of people I had never seen before. I felt like an alien and the thought of forging new friendships after finally getting comfortable a week before sounded exhausting. The people I met at that shelter were all great people, and one of them became a good friend, but at the time I was too overwhelmed to think anything other than these are not my people. I hadn’t found a trail family before I got off the trail but I’d gotten to know the people I was hiking with, and getting a week behind them all was a much harder blow than I expected.

Probably I should have turned around and called my friend, but I limped on and set up camp in a quiet spot all alone on a mountain with a view of Fontana lake, reasoning that if I still hurt that bad in the morning, I’d just get off at Fontana. I attempted to hang my bear bag and failed miserably, my stuff sack had too much momentum and wrapped around a tree about 20 feet in the air. I felt like a noob, like I had no business prancing around the wilderness and that maybe I should just go home. So I drank the half liter of wine I packed out and ate some artisan cheese and watched the sun set over the lake from my tent while gently stretching my ankle and hoping for some sort of clarity. 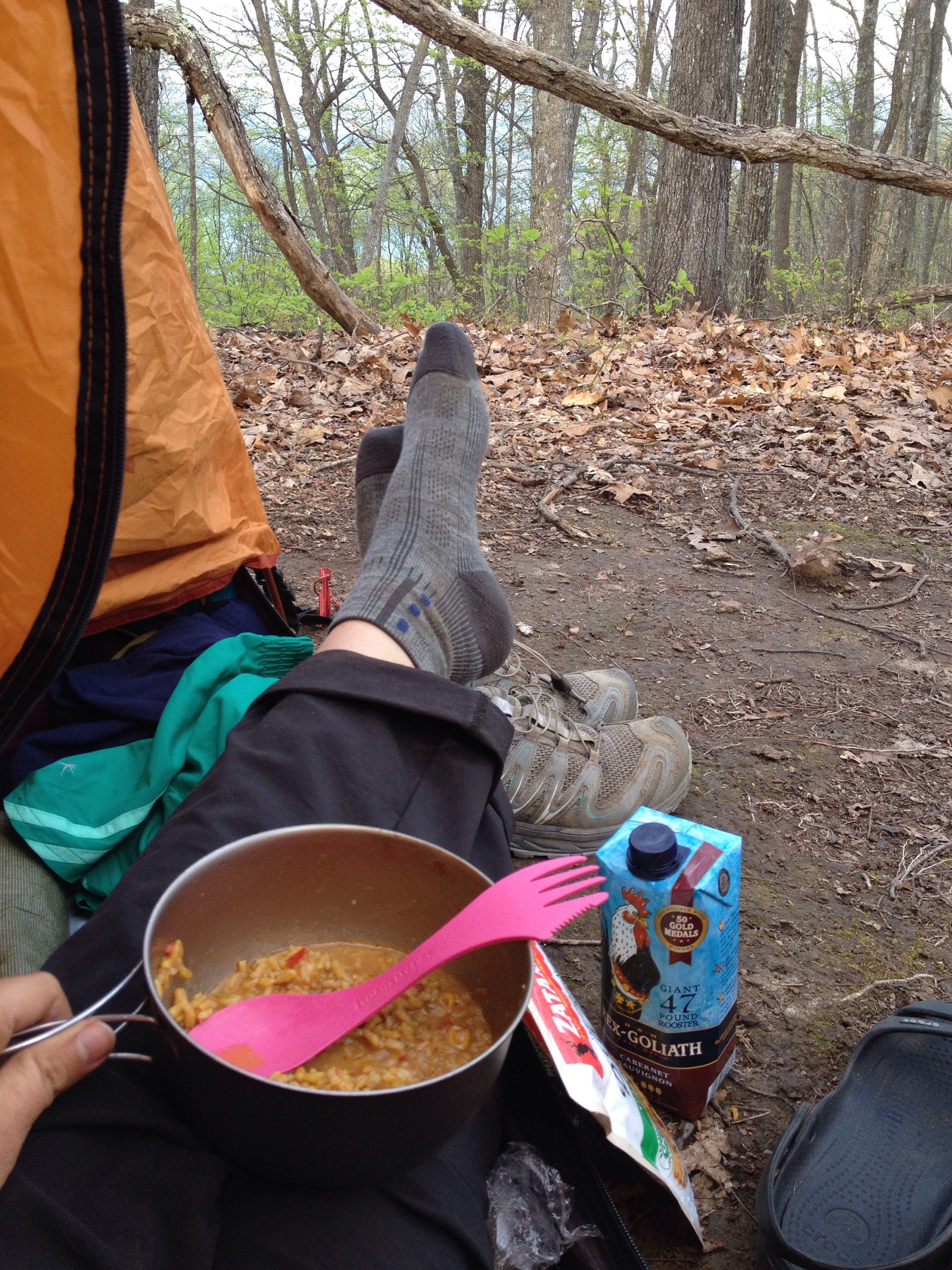 Fact: Boxed wine and a hearty meal with local cheese and a sweet view can drastically change one’s outlook

I woke the next morning feeling refreshed and was greeted with a gorgeous sunrise coming up over the fog shrouded lake. I reminded myself that one of my reasons for hiking was to find solitude, and I had.  I stretched and leisurely collected my things and got to hiking, and it came more naturally than it had the day before. I made an effort to not limp, so as to protect my other joints, and for the most part my ankle felt ok. I took ibuprofen as often as I dared (against the doctor’s advice I haven’t taken more than 10 in any given day) and before I knew it I was enjoying myself on the trail. 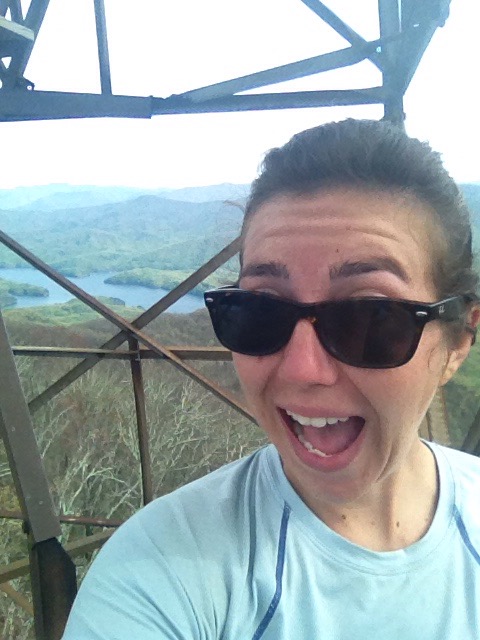 I had lunch at the Fontana Hilton and hiked on into the Smokies that day. I saw more deer the first two days than I’ve ever seen in my life, and they seemed totally unafraid and unperturbed by my presence. I spent my days hiking alone, enjoying long lunches with my shoes off and feet propped up, and met great people in the shelters at night. By my second and third days I started feeling at home again and began recognizing other hikers in my new bubble. Within the week I had formed close bonds with a whole new set of people. 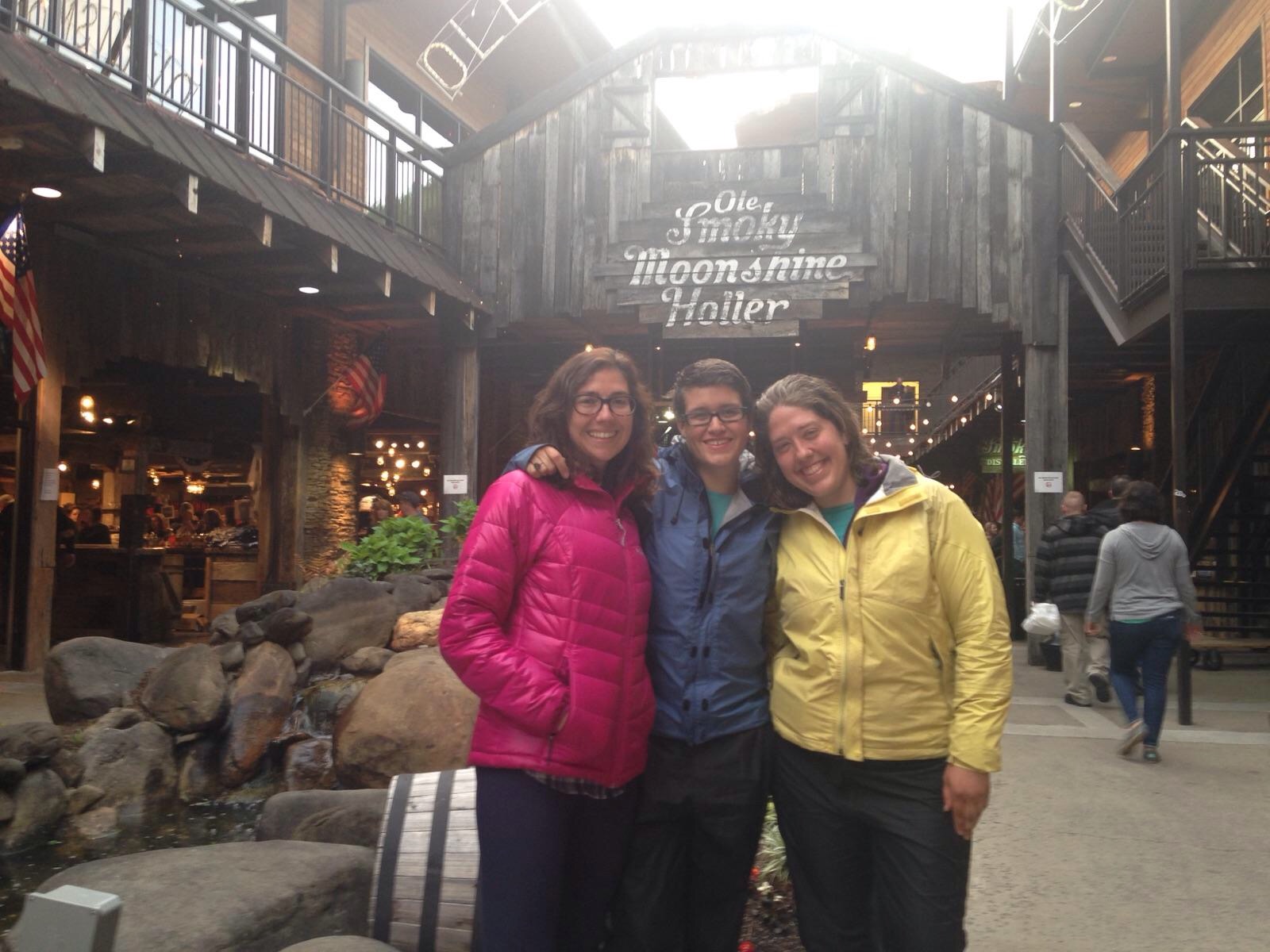 Crash, Mackenzie, and Walkie Talkie Nightengale getting ready to sample moonshine in Gatlinburg

Though I continued to meet new people daily, I felt a sense of belonging and was always excited to get to shelter and hang out with people I knew. My pack got lighter as I ate my food, I got used to my stretch/ibuprofen/rest routine, I started hiking longer days, and I finally got over my aversion to peeing within earshot (and sight but that wasn’t intentional, sorry Bluto) of other hikers. I was comfortable being uncomfortable.

That said, everyone has a comfort limit. After hiking through sleet and hail one afternoon and waking up the next morning to a frosty winter wonderland, on the first day of May, I decided to make an impromptu stop on Gatlinburg and get a hot shower and some good beer before braving the trail again. This turned out to be an amazing decision because that’s when I met my tramily, and also because I got a second chance to see Clingman’s Dome in good weather. 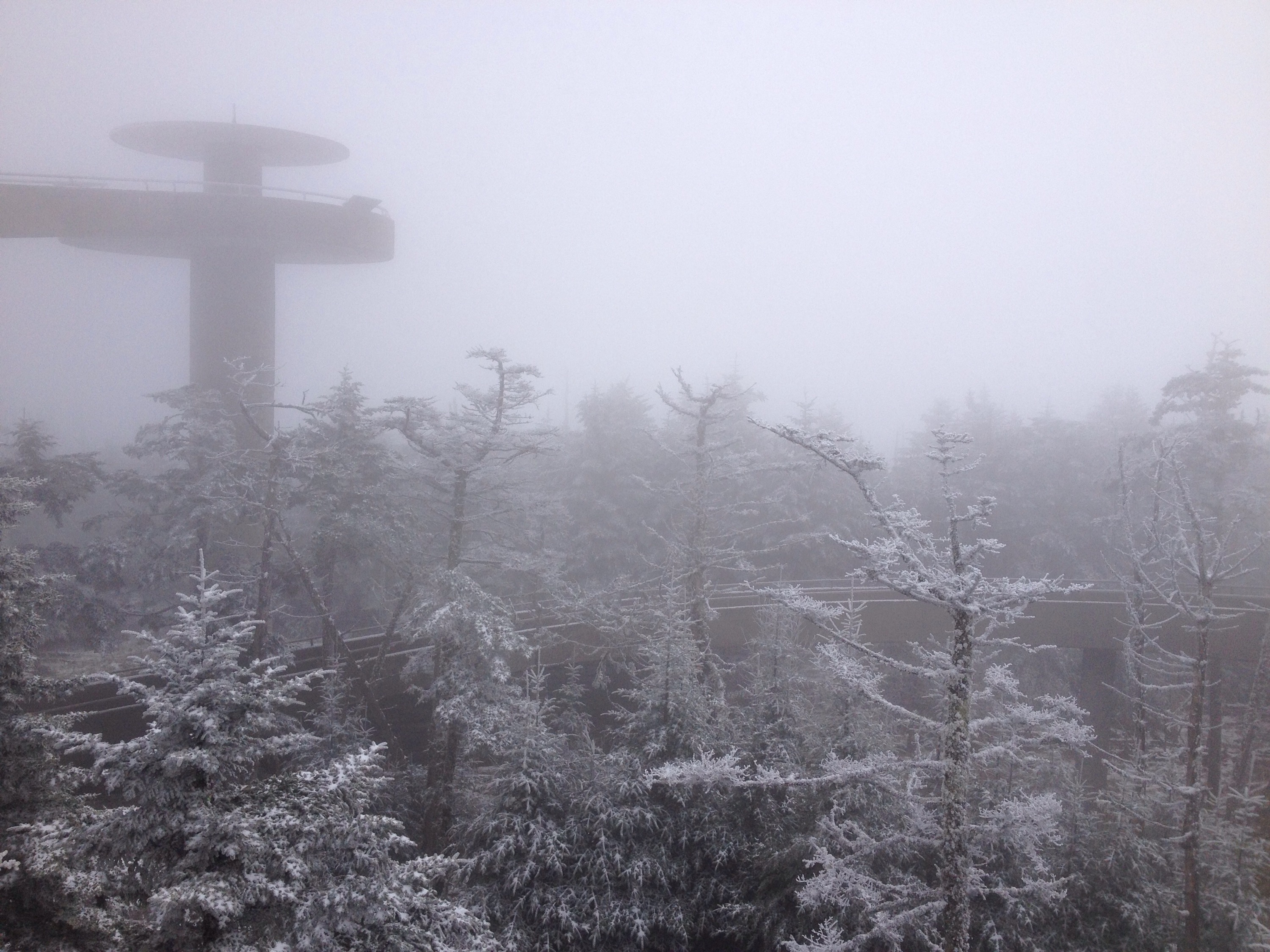 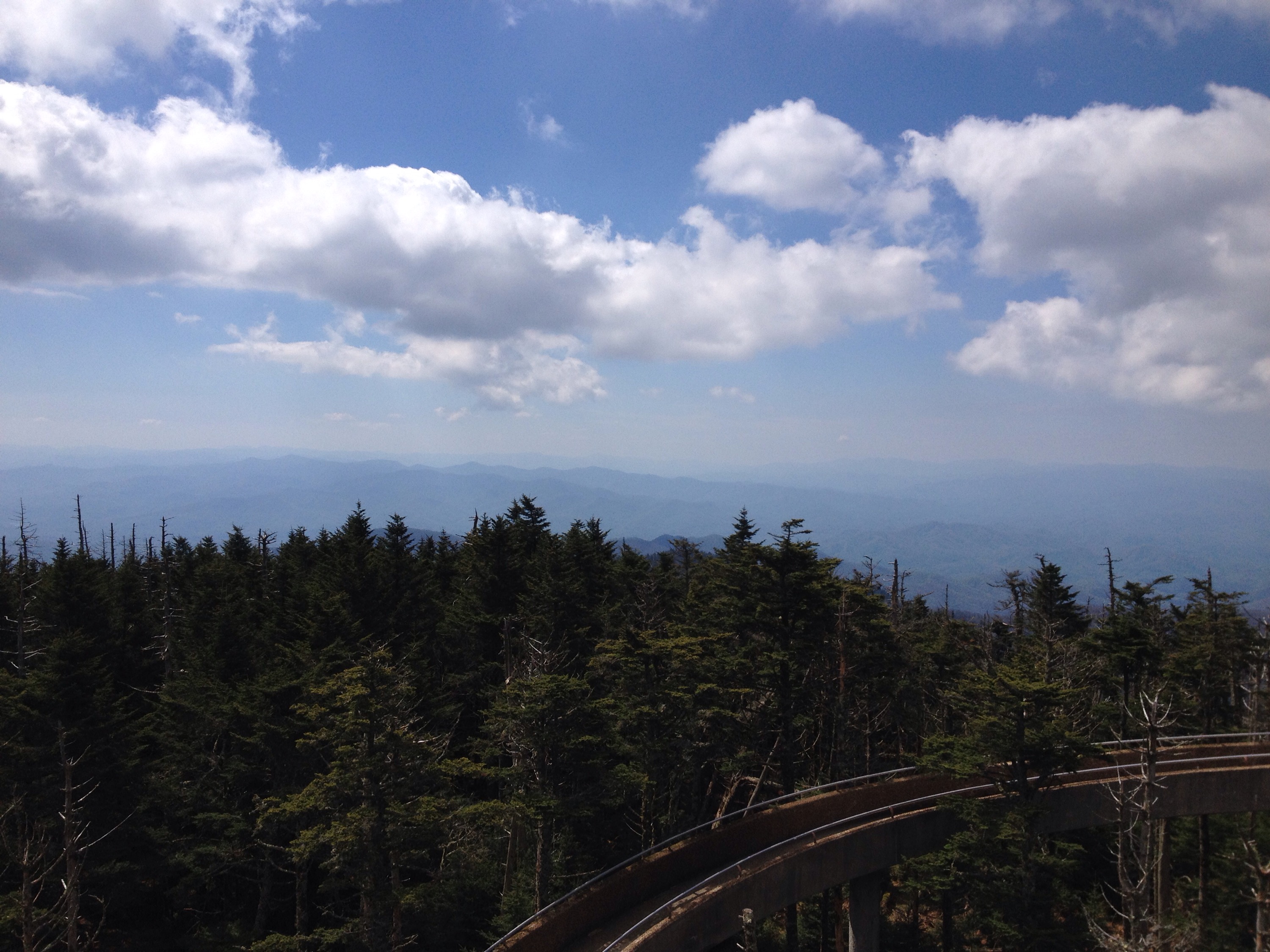 The day I left Gatlinburg I met several other hikers in my new late-hiker bubble. I finished the Smokies with a group of hikers that seemed pretty close knit, and somehow after less than a week, I’d been adopted. Now after just two weeks, these people are some of my closest friends and I’d give my last Pasta Side for any one of them.

I had been so bummed about taking time off the trail and getting behind all the people I knew, but as always the trail provided. My ankle still hurts, but in a normal hiker-pain sort of way. All of my joints hurt in that manner on occasion but regular breaks and yoga helps with that. I’m falling into a pleasant routine out here and loving life.

Sunset and moonrise on Charlie’s Bunion

I'm a 2015 NOBO thru-hiker. I recently gained the opportunity to change my life direction, and free of (most) obligations, I'm embarking on a 6-month journey of self discovery. Before I started the trail I had never been backpacking and had almost no experience camping, but I'm having the time of my life and learning a lot. I blog about all my life experiences at https://morechocolateisneeded.blogspot.com/