We’re 670 miles into the trail already!  The 400, 500, and 600 marks flew by, I’ve made it to Newport, VA but am blogging from Trail Days, an AT trail festival 200 miles back in Damascus. I’m still mostly hiking with Rocky and Iron Chef, and we’ve picked up Easy Rider and Bobcat for a lot of the miles since my last post. So much has happened in the past few weeks, this is going to be a long one! 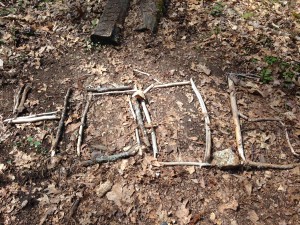 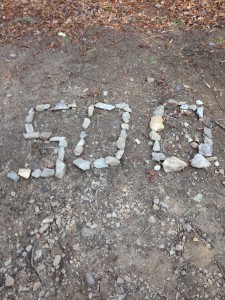 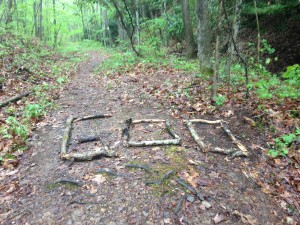 I guess the recurring theme of the last few weeks is that it’s getting real out here. We’re over a quarter of the way through the trail, and every time I see a map of the whole AT it actually looks like more than a mere pittance that we’ve covered. I don’t feel like an amateur anymore, in fact, I feel like I’m really good at walking.

We’re averaging 20+ mile days, and the terrain has evened out (a little). Since I last posted we finished both North Carolina and Tennessee and are about 200 miles into Virginia. It has almost been 2 months out here, and not only are we covering distance, our mid-August deadlines are starting to loom over us. It feels like we’ve got to start really covering big miles if we want to finish in time. 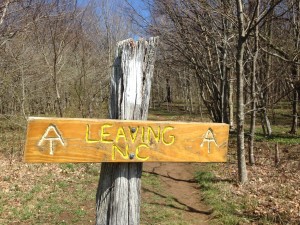 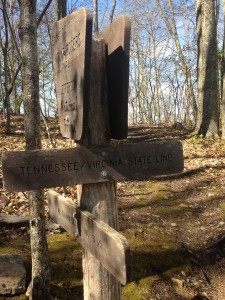 Virginia! With 550 miles in this state it will be a while before we cross another border

Compared to when we started in Georgia the crowds have thinned out a lot–initially, if we didn’t get to a shelter by about 4pm it would be completely full. Make that 1pm on a rainy day. Now, it seems like there’s always room at the shelters and campsites, even if it’s well after dark. I’m not sure if people are dropping out or if the crowds are just dispersing themselves differently between campsites and shelters. Either way, it feels much less crowded out here now.

The most stressful and “realest” decisions for me are always about pace and people. “Hike your own hike” is pretty much the trail mantra. In essence, it means that you shouldn’t modify your hike because of others because you’ve got to do what’s right for you. While I want to hike my own hike, the people I’ve met out here are the most rewarding part of the trail for me, and choosing to part ways is hard. When you say goodbye out here, it’s never clear if it’s goodbye for a few days, months, or forever.

For example, our friend Bobcat left Damascus a day after we did and pushed a couple really big 25+ mile days to catch up with us because he wanted to hike with our group. In the process of over exerting himself to catch us, he got a bad shin splint. Then, the question became–do we slow down for Bobcat since he worked so hard to catch us? Or, do we continue on at our pace? Ultimately that situation resolved itself and Bobcat took a few days off the trail to see his brother’s graduation, still, it illustrates that the choice isn’t always easy and we still don’t know when we’ll see him next after Trail Days.

Another example–at Kincora, Rocky got a stomach bug and needed to take a zero day. So what do Iron Chef and I do? Do we take a zero in Kincora for Rocky? He took one for me in Erwin when I was hurt. Do we hike on and wait in Damascus?  If we could pull a few 20 mile days we could catch Bones before he left Damascus, but if we took extra time in Kincora we would miss him. In that case things also worked out–Chef and I slack-packed a day, came back to Kincora, and then the next day hiked into Damascus. Chef and I were able to catch Bones for a few hours, and then we waited in Damascus for a day for Rocky to show up.

A final example–what do you do when you planned to hike a 20 mile day, and 10 miles into it Zach Davis and Carlie Gentry show up with tacos, beer, pizza, and margaritas?  Do you hang out for a few hours and then hike on? Do you shorten the day and just go to the closer shelter 4 miles away? Or do you call it a day right then and there?

Just kidding 🙂 that decision was easy, obviously you call it a day.

Here are a bunch of pictures and highlights from the last couple weeks (in no particular order): 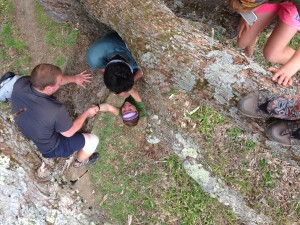 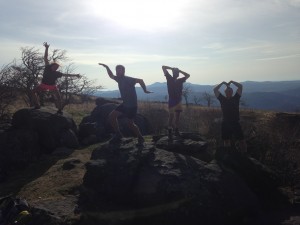 Now that we’re used to hiking all day every day we’ve been taking time out of our day to incorporate some play. It’s not like we have to be anywhere at any time, so why not have lunch in a tree or rock climb on top of a sunny bald? 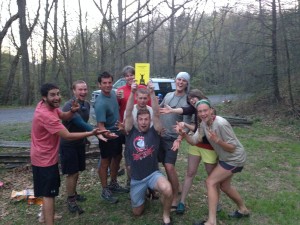 I love Appalachian Trials! and Zach Davis! and Carlie Gentry! THANKS GUYS! Click this link for a recap of this excellent day and some great videos. 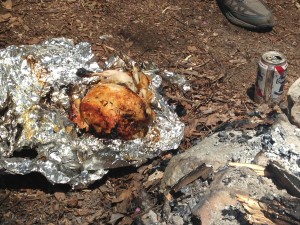 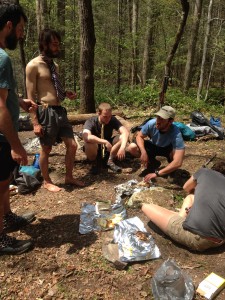 There’s always something to celebrate out here. Bobcat, Slayer, and Moses decided they wanted to celebrate hitting 300 miles with a feast of epic proportions, and they were kind enough to let us join in! We had chicken, onions, peppers, and brown sugar apples all wrapped in foil and thrown in the fire.

It’s easy to find cause for celebration, and it’s also pretty easy to find cause to get weird. We made “drunken chicken” which entails stuffing the chicken with a beer can while it cooks. When the chicken was done there was about an inch of beer still left in the can. Someone, I believe it was Slayer, said “and if we all drink a sip of this, we’ll become family!” and so we did. If you’ve ever been curious what the last inch of PBR tastes like after it’s been thrown in a fire inside a chicken for an hour, the answer is: Doritos. 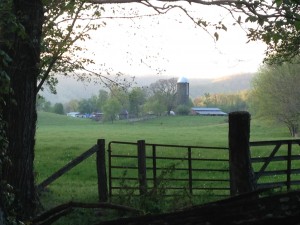 hiking in the evening is my favorite 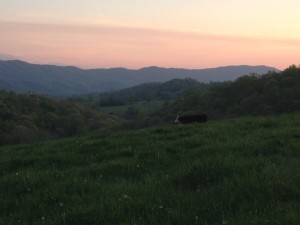 I’m 200 miles into Virginia and I definitely have not felt the “Virginia Blues” yet. I am completely floored by how beautiful this state has been. Lately, I’ve found that while my first instinct is to wake up and hike until the miles of the day are over, it can be very rewarding to take a mid-day break and hike into the evening. 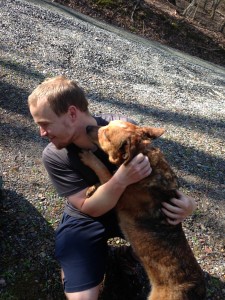 We had a trail dog for a few hours! We came across this pup on the trail, after calling his owners we learned he had been missing for about a week. After feeding him some jerky and water he followed us to the next road crossing where his owner came and collected him. If this guy hadn’t had any tags he’d be coming with us to Maine for sure! 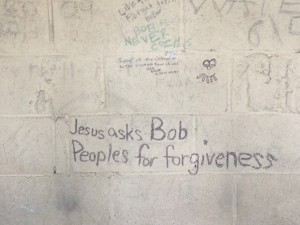 We spent a couple nights at Kincora Hostel in Hampton TN, which is run by trail legend Bob Peoples. He is one of the nicest people I’ve ever met.  He slack-packed us about 29 miles and graciously put up with us when we were horribly late to the spot where he picked us up. We’re going to make it up to him at Hard Core this weekend, an event where current and past thru-hikers help for two days with trail maintenance. 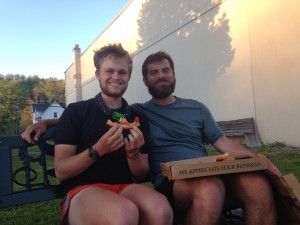 We caught the elusive Bones!

While we’ve accepted that we probably won’t be hiking much with Bones anymore, it doesn’t stop us from trying to catch up! Chef and I caught him briefly when we first came to Damascus, but about an hour later after some pizza he hiked on. Rocky and I caught him again two days ago, which was completely unexpected, but alas we came to Trail Days and he didn’t. 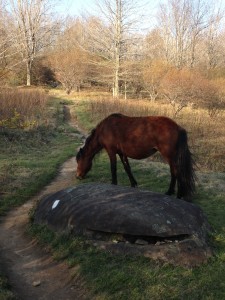 The day we went through the Grayson Highlands was one of my favorites so far. I came across this guy munching on some grass at mile 25 of a 30 mile day. 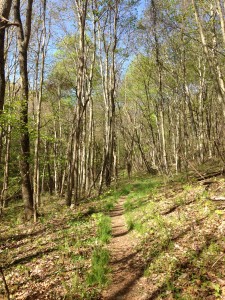 Way better than a treadmill!

The day after the glorious Cinco de Mayo trail magic Carlie and Zach slack-packed our stuff about 14 miles up the trail. This morning was perfect; the terrain was mostly flat, the sun was out, a cool breeze was blowing. I ended up running a large portion of the day, mostly just because I could! 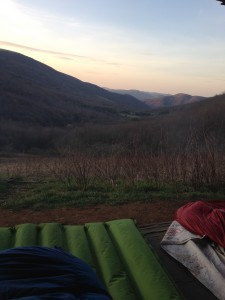 Here is a sunrise from Overmountain Shelter. This shelter is a renovated barn with lots of space. The night before we shared the area with a boy scout troop who had us guessing at riddles all night.

Riddle: A guy parks his car at a hotel and goes bankrupt. What happened? 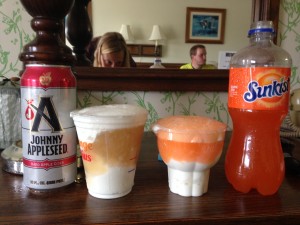 I crave orange soda more than anything when I’m on the trail. The day or so before I know I’m going into town I think about all the things I want to get when I’m there. Iron Chef and I spent a large portion of one especially hot day talking about wanting to make an orange soda float. The conversation then progressed into the one thing that might be even better than that–apple cider floats. We couldn’t find real apple cider at the next gas station, but we made do with hard cider. 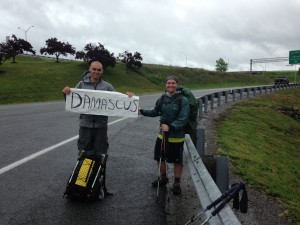 Someone! Anyone! Please pick up these wet smelly hikers! 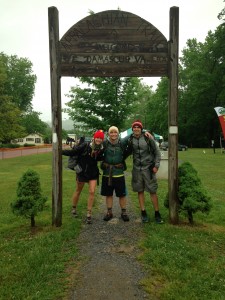 Me, Rocky, and Easy Rider. WE MADE IT!

Getting back to Damascus for Trail Days was no easy task. We had to hitch about 200 miles south. After 10 rainy hours and 5 different hitches we finally made it! There was a point when we were on an exit ramp that had barely any traffic at all for over two hours. We were pretty convinced we’d have to set up camp then and there. Two of the cars that helped us out were especially noteworthy, and a reminder not to judge a book by its cover. The car that picked us up from the deserted exit where we thought we’d have to camp was a BMW. When I saw the car coming down the road my initial thought was that this guy will never pick us up…and then he did, and he was really nice.

The final hitch we got was from a guy who also goes by the name of Sparky. Unlike me, this guy really earned the name–we found out he had recently gotten out of prison where he had spent 5 years for arson. Again though, he was the nicest person ever. He and his wife drove over an hour out of their way to bring us all the way to Damascus.

People, man, they’re great. You see it again and again out here.