It was Jackrabbit’s last day on trail. He would be stopping at Gentian Pond Shelter; the place he started his section hike two years ago. I could sense his anticipation from the minute he woke up. But he wasn’t jumpy or rushing to anything (contrary to his trail name). He seemed to have that “last day of school” energy. That feeling of excitement for the summer but also the nostalgia of looking back at what you just went through. And how fitting of this analogy for him as Jackrabbit is a history teacher back home. It was fascinating to watch Jackrabbit’s final day on trail and it provided me a glimpse of how I might feel if I am so lucky enough to get to my end.

Day started hot. And although we were sort of out of the White Mountains, the terrain didn’t get any easier. We huffed and puffed all the way up to Mt. Hayes were we took a nice break. This is also where we saw the mile 1900 sign! Wow. We couldn’t believe it. But the show must go on, and we didn’t stay long here. Everyone’s goal was to Jackrabbit to his final destination. On the way we saw some SOBOS. They were all a little too happy for me, which, to be honest, irked me a little bit. This feeling is illogical and downright mean, but in the moment, the last thing I want to hear after a big climb in the sweltering heat is “happy trails.” That’s just me. I sort of stopped saying that phrase in Virginia. Clearly, my people skills have taken a huge hit. 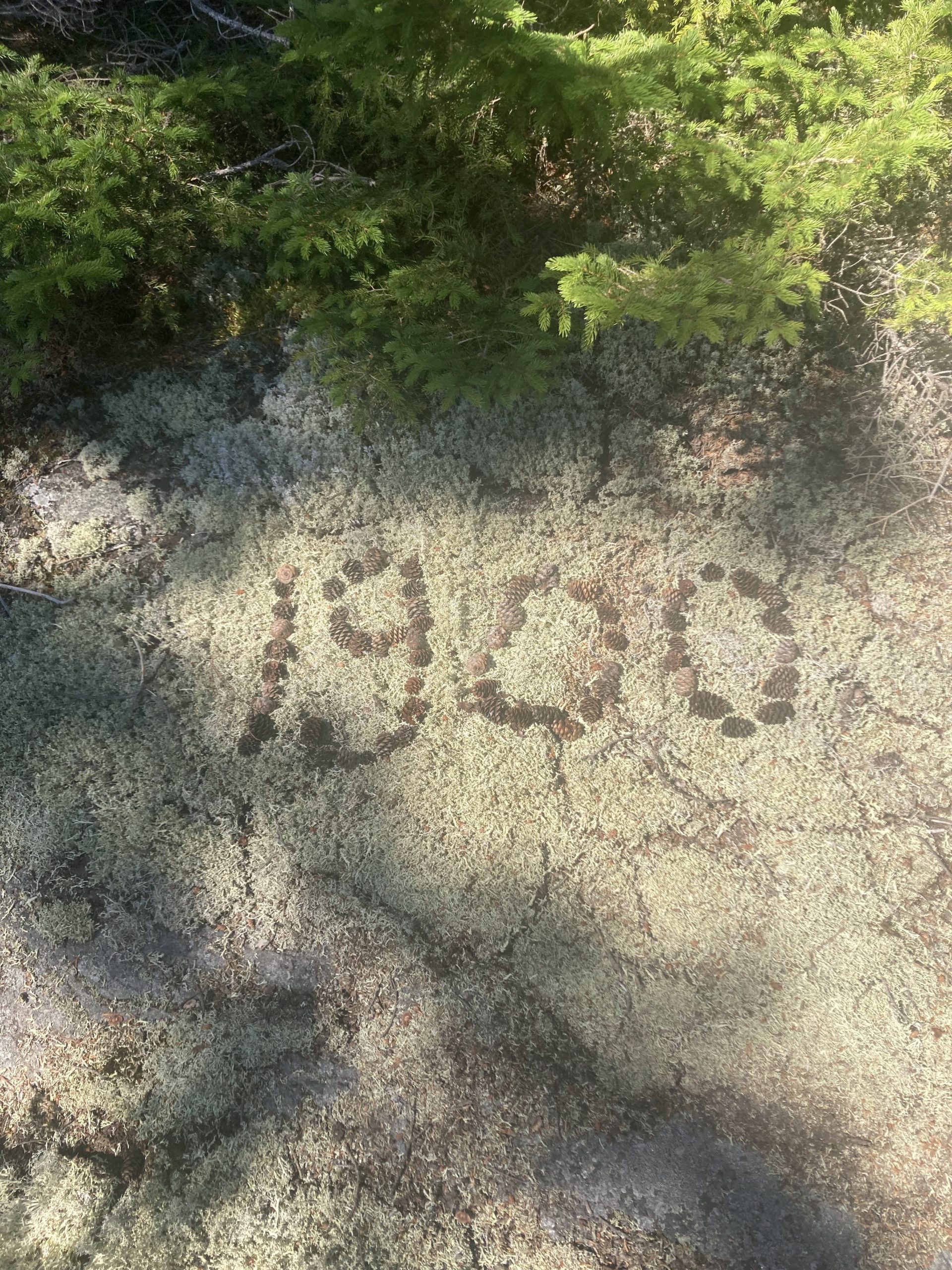 I made it sound like I hate SOBOS. I don’t. All in good fun.

We took a nice water break and ate lunch by a slow moving source. We were joined by other hikers. A hiker named Sleepy in particular who had been shadowing us the past couple of days. He recounted his verbal skirmish with one of the hut leaders in the Presidential Range which kickstarted a discussion about the affordability and accessibility of the huts. But Gentian Pond Shelter still beckoned us so off we went yet again. This would be the last time we saw Sleepy (I realized this makes it sound like I’m saying Sleepy died. He did not. We just didn’t see him again.).

Jackrabbit and Peach Fuzz turned on the after burners and left Margaritaville and I in the dust. They were either fast or we were slow because we didn’t see them until hours later at the shelter. Margarita and I arrived and saw both Peach Fuzz and Jackrabbit sitting in the shelter talking. This was the end for Jackrabbit. 2200 miles completed in a collection of sections spanning over two years. It was quite the accomplishment. It was also quite an emotional moment. For Jackrabbit but really for all of us. I would say also for Margarita and Jackrabbit because they were the first to meet each other and thus spent the longest amount of time with each other. It was a beautiful, sunny day. A great day to finish. And the view from the shelter broadcasted a spectacular site of the majestic New Hampshire mountains. And as Jackrabbit quietly stared off into the distance, in the most cinematic and dramatic way I could think of, I took out my phone and played his favorite song: Live Forever by Billy Joe Shaver. We cried.

Jackrabbit gave us the rest of his food and electrolyte packets before he left. We all gave him a hug and wished him farewell and safe travels back home. It was difficult walking again. I know Margarita found it displeasing to push another 10 miles for the day (it was also 4:00) and so did I. But we had agreed with Peach Fuzz before hand on the shelter we wanted to go to. And so we pushed on.

My hike almost ended at Mt. Success. I tried stepping over a tree root but my foot hooked on another root I didn’t see. I crashed to the ground with my head only a few inches from one of thousands ancient rocks that had embedded itself into the ground over time. My head was barely safe, but the flaw took a big one out of my knee cap. No blood. Just a wobbly knee that countered with a jolt of pain at every bend. I laid there on the ground for a few moments. Margarita, who was just in front of me and heard me shout, stopped and turned to look at her hiking partner sprawled on the ground, cussing at the air. After a few moments of catching my breath and waiting for my body to start the repair process, I muttered a motivational phrase (which I will not say here, but Margarita knows) and hiked on.

We hit another milestone. A rather big one, but in all honesty, the effect of this for me was minimized due to Jackrabbit’s goodbye. I was still kind of sad. And still hurt.  We officially crossed the borderline into Maine. I did not feel much seeing the sign except the funny little caption someone wrote on it. Peach Fuzz did get emotional. Understandably. He had gone through a lot more than I did on this whole journey. From starting in March, getting Nora and Lyme, he thought he wasn’t ever going to get this far. Margarita and I gave him some time alone. 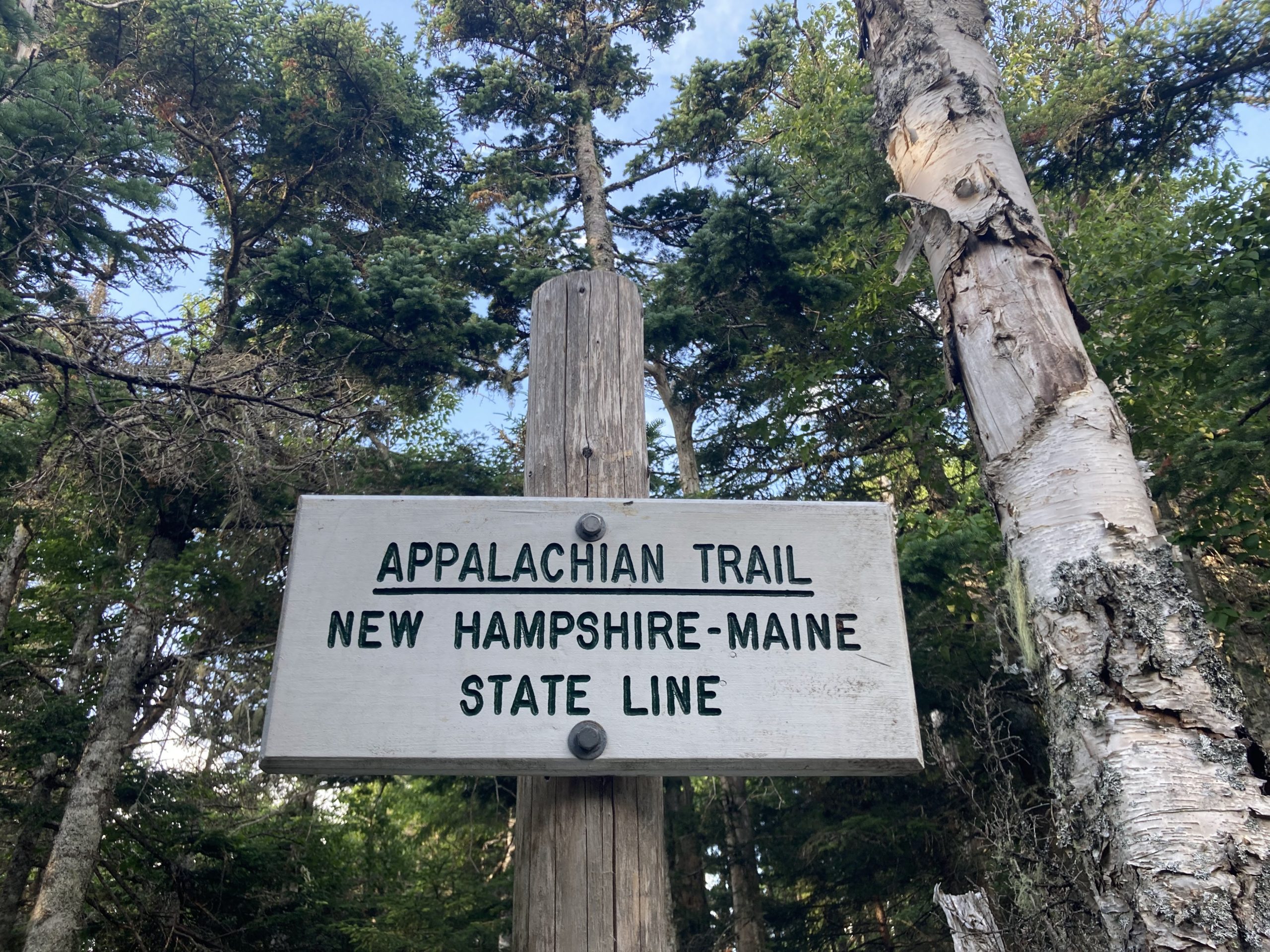 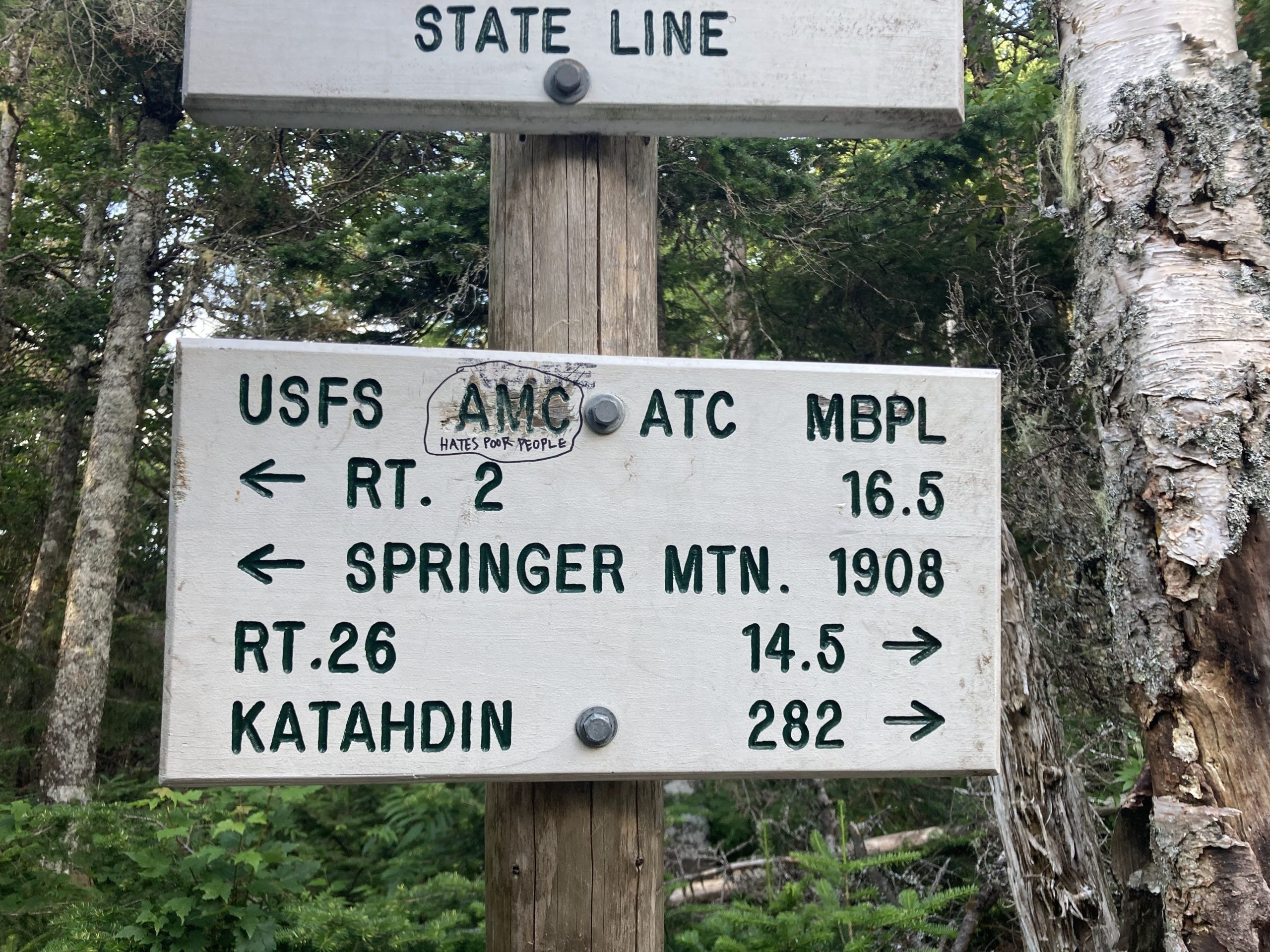 I continued to limp down the trail and by 7:00 we started to worry about daylight. To say both Margarita and I were upset would be an understatement. We both were sort of tired of hiking late at night, and we wanted to eat dinner without needing a headlamp. But we were at a point of now return. The nearest shelter was forward, and we were told by happy SOBOS (BOOOO) that there were not any stealth sites up ahead. We were both equally emotional to say the least. But we hike on. That is what we do and also this was our only option (I do remember Margarita saying that if there was a stealth site, we were just gonna stop and take it). The trail got a lot nicer and although we did need our headlamps at the very end, it eased up on these tired hikers. We got to Full Goose shelter by 9:00. We ate dinner (I spilled my pasta literally right next to my tent and did a good old “Kevin trying to save the chili” maneuver), filled our waters (at a very cold water source), and went off to bed on the New England tent platforms. We were now in Maine. 267 miles away from Katahdin. I couldn’t believe it.