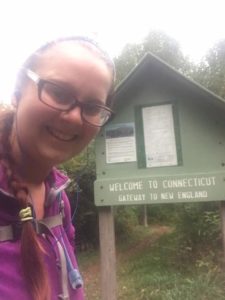 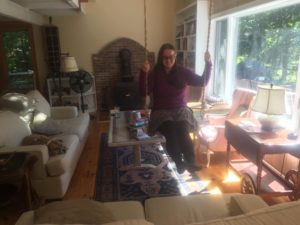 It’s always a struggle to start hiking after a “zero”. I lingered at Bob Troutman’s house in the morning enjoying coffee and a bagel-then a short walk back to the trail and a gradual uphill. I passed the Tom Leonard shelter; when there, asked a north bound hiker about the water situation. He told me he had crossed some streams so I continued on worry free. But walked for about ten miles without seeing any water sources. It was later now and I was starting to worry about my water situation. As luck would have it, I crossed a road and saw a man outside a house up the street . I asked if I could fill up my water at his house. He agreed and offered me a beer! His name was Richard and said he lots of thru hikers get water at his house. I was so grateful to him: I needed water for cooking and 5 miles the next morning. I thanked him and then continued on for an hour more before stopping in the woods to set up before I lost daylight. 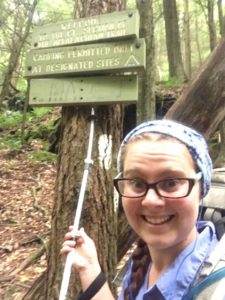 It was raining the next morning and hard to pack up my wet tent. I had a long climb up MT Everett and the wet rocks were super slippery. I eventually reached the top. There were no significant views but lots of sunlight to dry out all of my stuff. I stopped there for a while and then meandered down the hill and up Mt Race. I found a nice sitting place to make some calls and my relationship of two years ended. I was sad and confused and didn’t want to hike anymore. With only 400 miles left, my trip is coming to an end and I have no idea what I’ll be doing afterwards. I had trouble leaving the rock I was sitting on, but had to move on to find a suitable camping area, and I needed water. Five minutes later I was walking along cliffs that provided an excellent view of the lakes below. I entered the woods again as the sun began to set behind the pine trees. The woods were beautiful. It took my mind bad state for awhile and I was happy that I was outside; I would heal much faster on the AT then sitting in a dark apartment watching Netflix. I found an excellent running stream (first of the day) and collected 4 liters of water before walking five more minutes to Laurel Springs Campsite. I was alone again but was grateful to have the place to myself. I cooked and called friends before heading into my tent late that night. 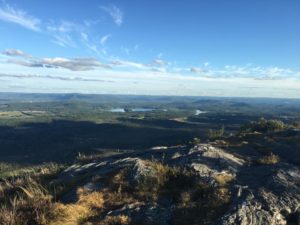 A beautiful day, but …

There was a thick fog the next morning and I procrastinated getting ready by making coffee and staring aimlessly at my guidebook. Eventually, I began hiking and soon crossed into my 11th state, Connecticut. From there I had a rock scramble up Bear mountain which I kind of enjoyed. The view was cool but it was cold so I continued on past Riga Shelter (stopped to check out the view there) until I reached the road crossing that led into Salisbury. It had been a short day but the next shelter sounded like quite a distance off the trail and I wanted a pick me up after the day before. I had heard nice things about Maria’s house (an older lady who hosts a small hostel in her own home). I gave her a call and she picked me up and brought me back to her cute little house. There was another hiker there and as soon as I had showered she drove us to a laundry mat right next to a Pizza joint. We enjoyed eating at the restaurant while waiting for our laundry to be done. We stopped by a store on the way back where I got some Ben and Jerry’s. After filling my stomach as much as I could, I settled in for a comfy night in a real bed. 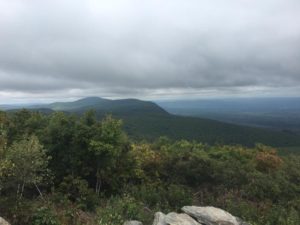 We were each rationed three eggs the following morning and I consumed my leftover pizza as well. After a late start, I walked back to the trail. I was aiming for a long day so I didn’t stop much until I arrived at a power plant with a water spigot. It was my only water source for the day so I filled up and tanked up. The trail was extremely flat and next to the river for the next couple miles before climbing towards the end of the day. I stopped for a late lunch and then arrived at the shelter after dark. There was one other person at the shelter and when I blew up my solar blow up lantern to see and unpack he yelled at me asking if I really had to do that. I told him that everyone had a right to the shelters and organized my stuff but then moved out the the picnic table to fume and cook in the dark. It was only 7:30 and he was already asleep. I guess that’s normal but I was pretty upset he’d yelled at me. Usually if you sleep in the shelters you know others may bother you and if you can’t deal, you set up your tent. When I found out he had the same itinerary as me
I went to sleep slightly grumpy.

Two miles for a sandwich

Grumpy got up very early and left while I stayed curled up in my sleeping bag until I was brave enough to get cold. The day held a mild roller coaster of mini ups and downs for no reason I could see. I started craving hot food around 11 and saw that a town was a little less than a mile from the trail. When I made it to the road I couldn’t get a ride but my decision was made so I walked to the country store. There I ordered a sandwich and charged my phone. It had started to drizzle when I left. I only had a few miles left and after the initial climb is was super flat and paralleled the Housatonic River. I found Grumpy at the shelter as well as two other section hikers headed south. Grumpy (I found out his trail name was Gezzer) was better behaved around others and I was able to cook and set up in peace.

I had a short day planned and the first 3 miles were blissfully flat and scenic. Then I began a rock scramble that reminded me of Maine. After the scramble it was pretty gentle as I made my way to the road crossing that led into Kent, CT. It didn’t take more than five minutes before I had a ride to town with a happy cute puppy on my lap. My ride asked where I’d like to go and I said, “where ever you think has the best food “. He took me to a place called J.P Gifford — was a deli with some pretty delicious stuff. I ended up with one of the best California burgers I’ve ever eaten. From there, I walked to the grocery store where I needed a heavy resupply. I felt silly outside sitting on the pavement surrounded by my unpacked gear and grocery bags and received few weird looks. I gathered my stuff together and headed to a cool looking coffee and chocolate shop where I helped myself to a mocha and lots of phone charging. I was about to leave when I saw a girl enter and she was carrying some dry sacks; instantly I knew she was another hiker. She had flip flopped as well and I hung out for awhile chatting until I looked outside. It was getting dark and getting back to the trail in the dark is always a challenge. Luckily when I walked outside a man drinking a coffee offered a ride to me and the other girl. When we returned it was a quarter mile up to the next shelter: we walked together with our headlamps. Just as we arrived I discovered my phone was missing. I knew I’d had it in my hands in the truck so I figured lying on the ground/road where we’d jumped out of the truck. I threw down my pack and walked/ran as fast as I could back down to the road: after panicking I found it within a few minutes. It was a steep climb back up! When I arrived at the shelter I was greeted by the other girl and none other than the grump “Geezer”. I didn’t want to make dinner so I just unpacked –relieved I’d found my phone. I wanted to chat more but grumpy asked us to be quiet (of course) so I just hid in my sleeping bag and went to sleep.