The Smokies were fantastic!

I arrived at Fontana Dam, the launching point for the 70-plus miles of trail within the Smokies, fairly early on March 30, day 17 of my hike.  The dam was visible through the trees several miles out and the trail took its time descending.  If the dam was down and right the trail wanted to go left and up.  Despite this mild frustration I felt energized by the prospect of resupplying at the village and entering the much talked about Smokies.

I’ve been eagerly awaiting this portion of my hike since day one. I first visited the park with my brother and we quite unexpectedly stumbled across the AT while hiking. This same brother was later married in the Smokies. In my previous job flying we routinely flew low-level training through the Tennessee mountains right to the park border. I would stare down at the rugged terrain and wondered if my thru-hike dream would ever materialize.   For the hundredth time I reminded myself this was really happening.

It’s true, the Smokies hold a special place in my mind.

Camaraderie at the Fontana Hilton

Fontana offers a last opportunity to replenish, recuperate, and socialize before heading into the mountains. In addition hikers enjoy the relative luxury of the Fontana Hilton Shelter, so-called because it’s a double-wide, two-level with running water, showers, and even a phone-charging station (that didn’t work). Many hikers choose to zero here so there were many familiar faces. Throw in a beautiful sunset and full moon plus plenty of beer from the nearby Fontana Village and it was a special night. It felt like a festival. 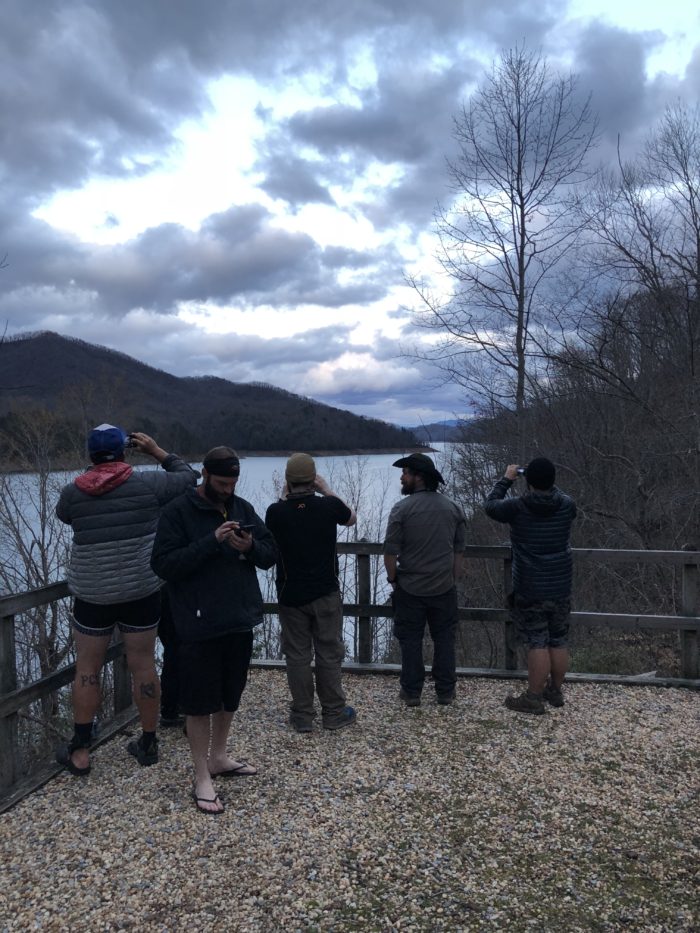 Watching the sunset and moonrise at Fontana.

The next day was the first of four consecutive bright blue sunny days. For all my excitement there seemed to be an equal amount of angst in the hiking community regarding the Smokies.  We had heard cautionary tales of woe that intensified as we approached Fontana.  Certain death lay ahead, chest-deep snow, ice, fog, avalanches, hungry polar bears, and hurricane-force winds.  That wasn’t to be our experience.   Warm and sunny, it didn’t rain until the last night.

The first day involved climbing over 4,300 feet.  Glances ahead revealed the Shuckstack fire tower above the trees on the ridge, behind us Fontana Dam getting smaller and smaller.  To put it kindly, Shuckstack tower was in a state of disrepair, but the view was worth the rickety, wood-rot-induced acrophobia. 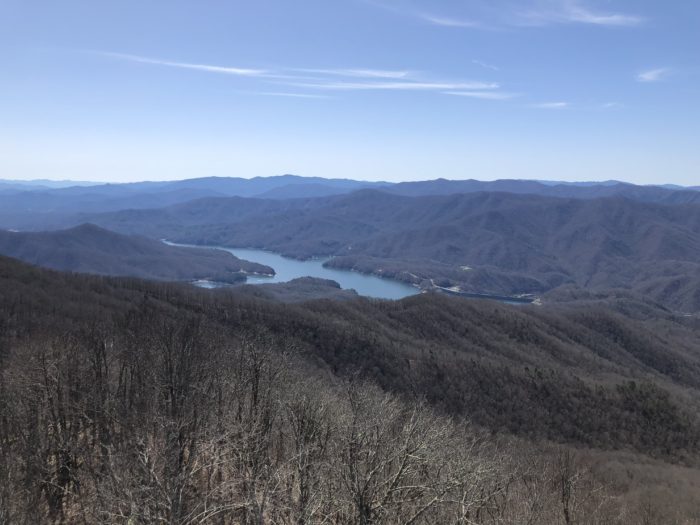 Fontana Dam in the rearview mirror.

Mollies Ridge Shelter was mostly empty when I arrived but by dark it was packed with at least a dozen tents and hammocks outside.  In hindsight I should have hiked an additional three miles to Russell Field due to the NPS permit system that induced some late-night drama.

Section hiker permits have specific reservations by date and shelter, and thru-hiker permits have space-available privileges at any AT shelter.  Late-arriving section hikers are entitled to displace thru-hikers already sleeping in the shelter.   Strategically located as the first NOBO shelter, this happened at Mollies repeatedly. A family of three arrived, with a 13-year-old girl, and didn’t have  a tent to pitch.  No thru-hiker wanted to budge so they set up a cowboy camp outside.  I was warm and snug but another hiker and I got up and offered our two spots in the shelter.  They declined, wanting to stay together.  They also told me they had no tent because they believed the NPS banned them and would fine them for setting one up.  Not true or a safe practice but it definitely reveals some holes in the permit process.  At least it was a rain-free night.

What can I say; it was another great day with 360 degrees of postcard-worthy views and relatively easy (that’s my name) ridge-running trail. Highlights included Rocky Top and Thunder Mountain. 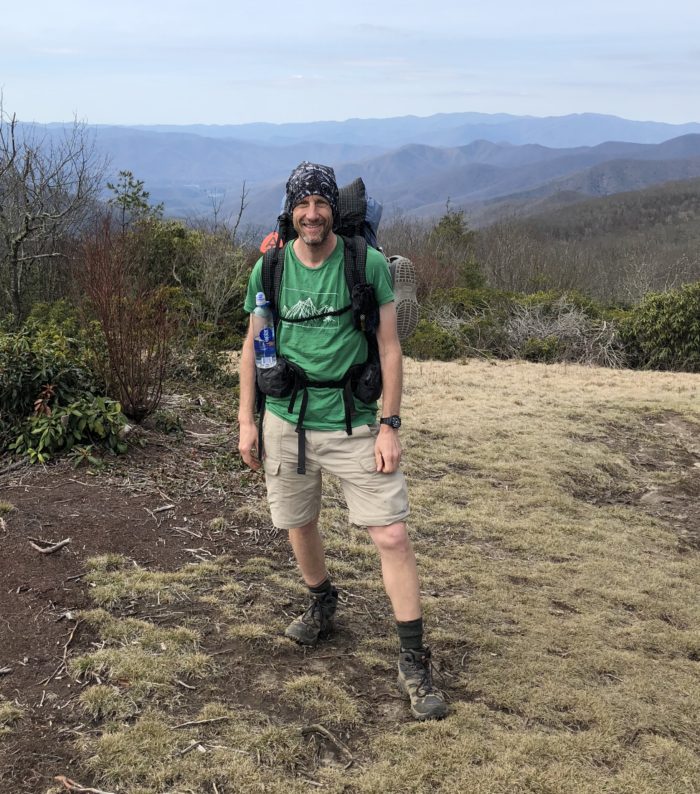 Today was also noteworthy because I “officially” joined a pair of hikers I’d been leapfrogging for the past weeks; Paul from Ireland, a mid-50s hiker from, well, Ireland, and Crunch Time, a late-20s hiker from Ohio.  They were walking together and we kept sharing camp space.  Until this time I’d been hiking solo but in a bubble, meaning I’d see familiar faces at most stops but the hikers would gradually fall behind or pull ahead.  There was no real attempt to stay together even though we often did.  So far I’d found the hikers my approximate age are not quite wanting to go the 15ish miles I feel comfortable with.  The younger hikers can easily do 15 but they tend to want to go to town and party every two to three days, and face it, they probably don’t want to hang with a 49-year-old.  I love both groups; the AT is really like that, old and young, rich and poor all get along great.  That said I asked Paul and Crunch Time if I could walk with them awhile and of course they said yes.  We’ve been a pack ever since.

Uhm, again what to say?  Beautiful day and trail to celebrate Easter.  Today the three of us hiked up to Clingmans Dome, the highest point on the AT, 6,658 feet, and experienced Newfound Gap, a busy parking area where US 441 bisects the park.  Newfound Gap was full of vehicle-bound tourists and we thru-hikers were a curiosity-inducing oddity.   As we stretched out prone on the comfortable concrete (I’m serious, it felt great) we answered questions, had our photos taken, and received handouts of food and drink.  It was great fun. 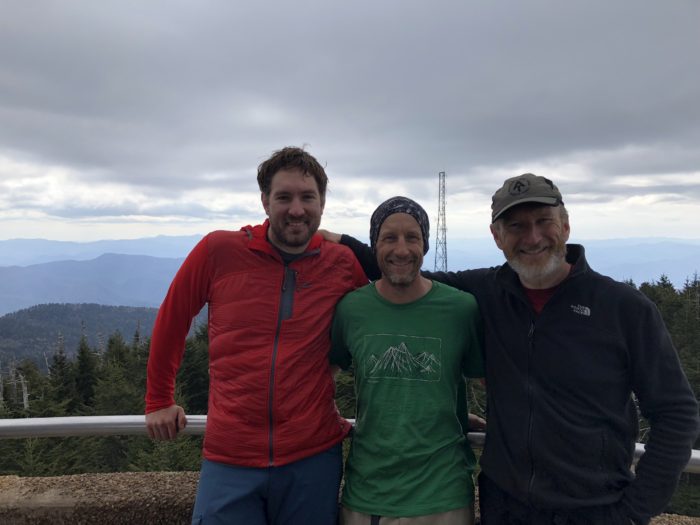 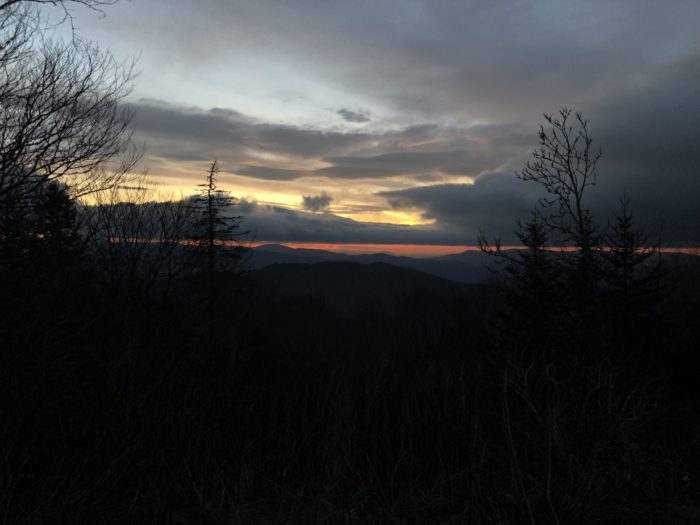 Sunrise in the mountains.

Beautiful sunrise to start the day my first 20-miler.  Charlies Bunion was the visual highlight in a day full of spectacular views.  I’m really running out of adjectives. 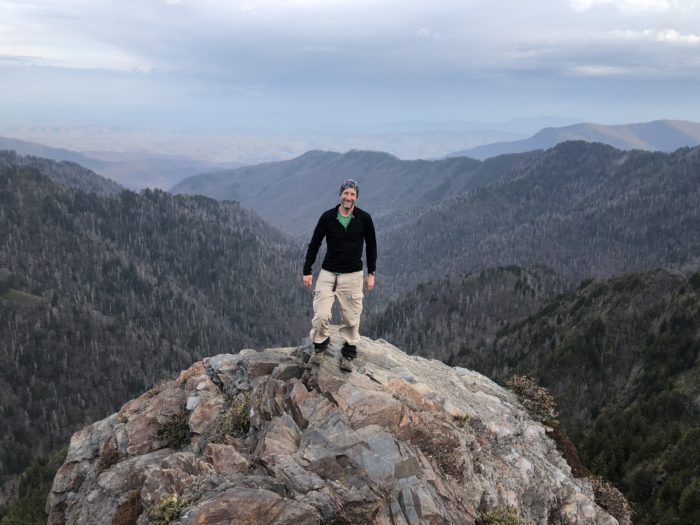 After a 20-miles day our run of great weather came to an end.  A long overnight thunderstorm provided a new version of nature’s power and beauty.  The shelter was full so we packed up wet and hiked out of the Smokies.  Even today the rain stopped and the skies eventually cleared.  A shorter hike brought us to Standing Bear Hostel.  Standing Bear  is hard to describe except as a hippie/hillbilly commune. But that’s a story for a future post. 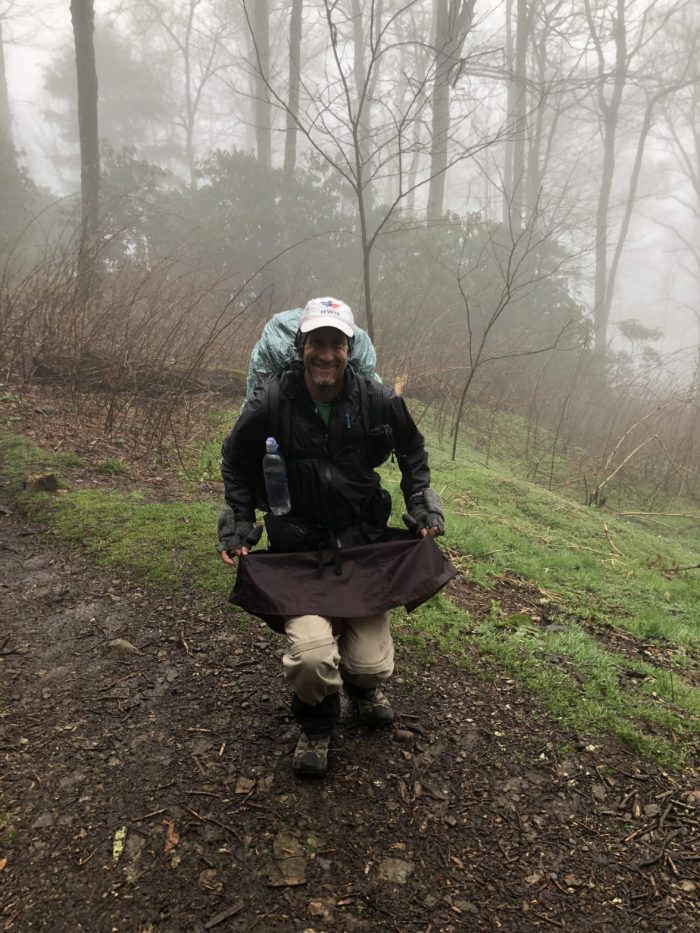