When I left Port Clinton, PA, I was slated to hit Duncannon on a Sunday, which wasn’t going to work, because I had mail waiting for me there, and I couldn’t get it till Monday. I didn’t want to stay in Duncannon, so I slowed down to reach town Monday morning. I did a ten-mile day out of Port Clinton and stayed at the Eagles Nest shelter. All night I could hear a dog howling and a man singing at the top of his lungs. I assumed they were camping nearby, but the next morning I woke up early and saw no sign of anyone nearby. I’m half convinced the man and his dog were ghosts.

Two nights later, there was a long stretch without a shelter, so I had to camp. When I went to set up my tent that night, one of the two poles snapped. I looked down at it, stunned, and placed the two broken ends together, trying to will them to mend. Realizing my pole was broken for good and I was fifteen miles from a shelter, I burst into tears. I cried until I couldn’t see, a crumpled ball on the forest floor. After a few minutes of grieving for my broken pole, I tried to duct tape it back together. That didn’t work, because the pole bent right through the tape, ripping it. I set up my tent with one pole, cooked my dinner, and went to bed in the sad structure I had thrown together. Luckily it didn’t rain that night. After I got in my tent, I saw two headlamps approaching. It was Gonzo and Brandon. I knew Brandon and was so excited to see a familiar face. The next day I found a spot that had cell service,  and I had my mom order me a new tent because mine was a discontinued model, so the pole likely couldn’t be replaced. I slept at Clarks Ferry shelter and went into Duncannon the next morning.

I had heard Duncannon was a really sketchy town, but when I walked down High Street, there were all kinds of cute old ladies sitting on their porches, which were decked out with vinyl leaves and Halloween decorations. As I passed, one old lady wished me luck on my hike and said, “God be with you.” Another old man watering his flowers offered to give me directions before I even asked. When I got to the post office, I picked up my box of winter gear and a package from my friend Camille. Camille had loaded the box full of cookies and food, so I didn’t need to resupply. I crammed everything into my pack and headed out. 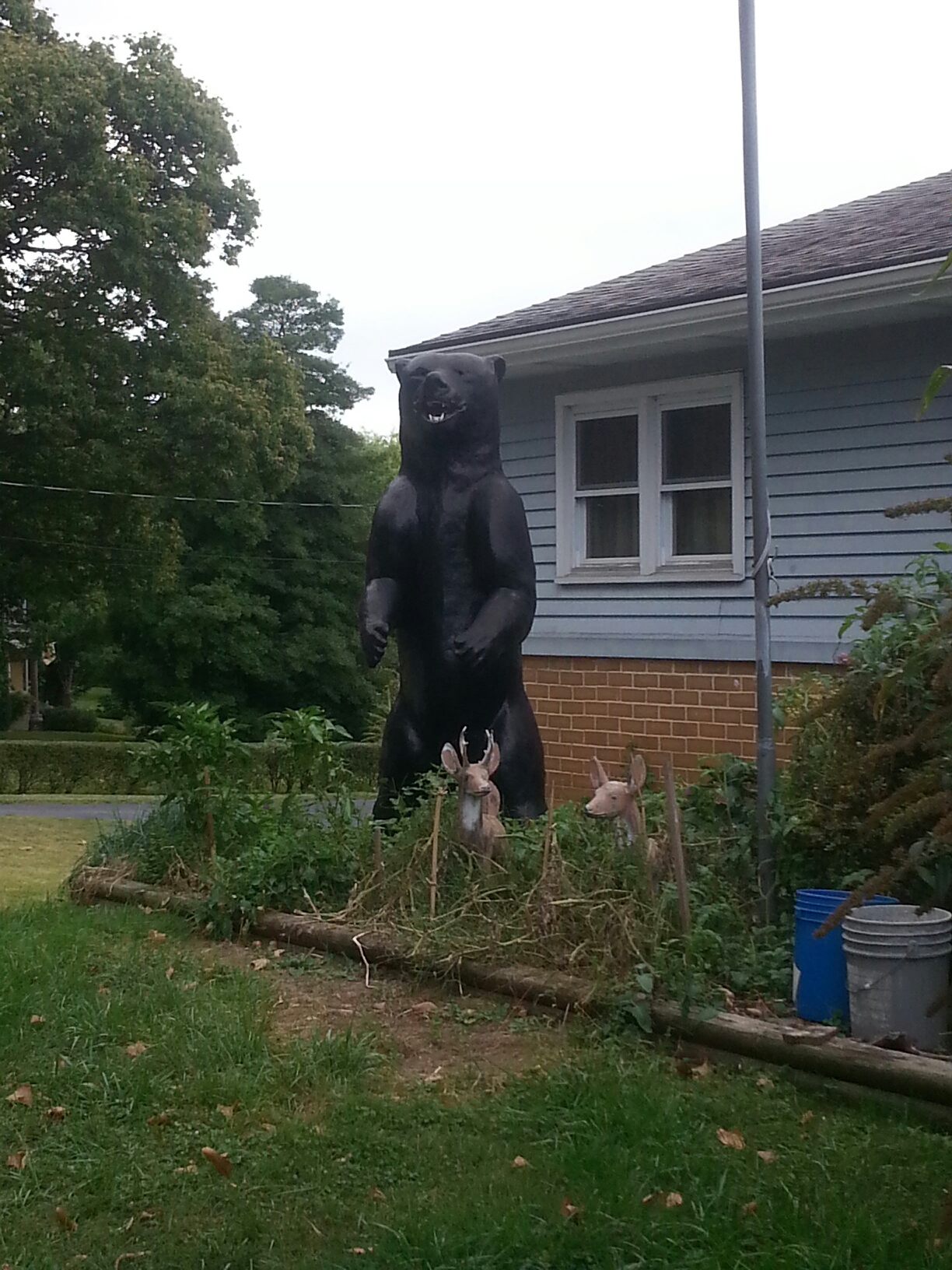 Duncannon residents are serious about their lawn bears.

That night I slept at a Super 8 that was a short walk from the trail. I had a huge bed and a tv to myself, and there was a diner right across the street. I ate a burger with ham on it (!!!!) And some peanut butter pie and went back to my room to watch Friends. The next day I had myself a continental breakfast (!!!!) and hit the trail. Tuesday night I had to camp in my broken tent again, but this time I tried to splint the pole with a stick. It broke the stick, but I just added another stick, and it worked well enough. Wednesday morning I walked through Pine Grove Furnace State Park, home of the half-gallon challenge, but the store was closed, so I couldn’t do the challenge. Also, it was eight in the morning and really cold, so a half gallon of ice cream did not seem that appealing to me, which is rare. On my way out of the park, I ran into This Is It, and we stayed at the Rocky Mountain shelter that night. The next day we ran into Puck at the Mason-Dixon line, and then This Is It and I stayed at the Free State hostel, where we did laundry and ordered enough pizza for dinner and breakfast. It was glorious. 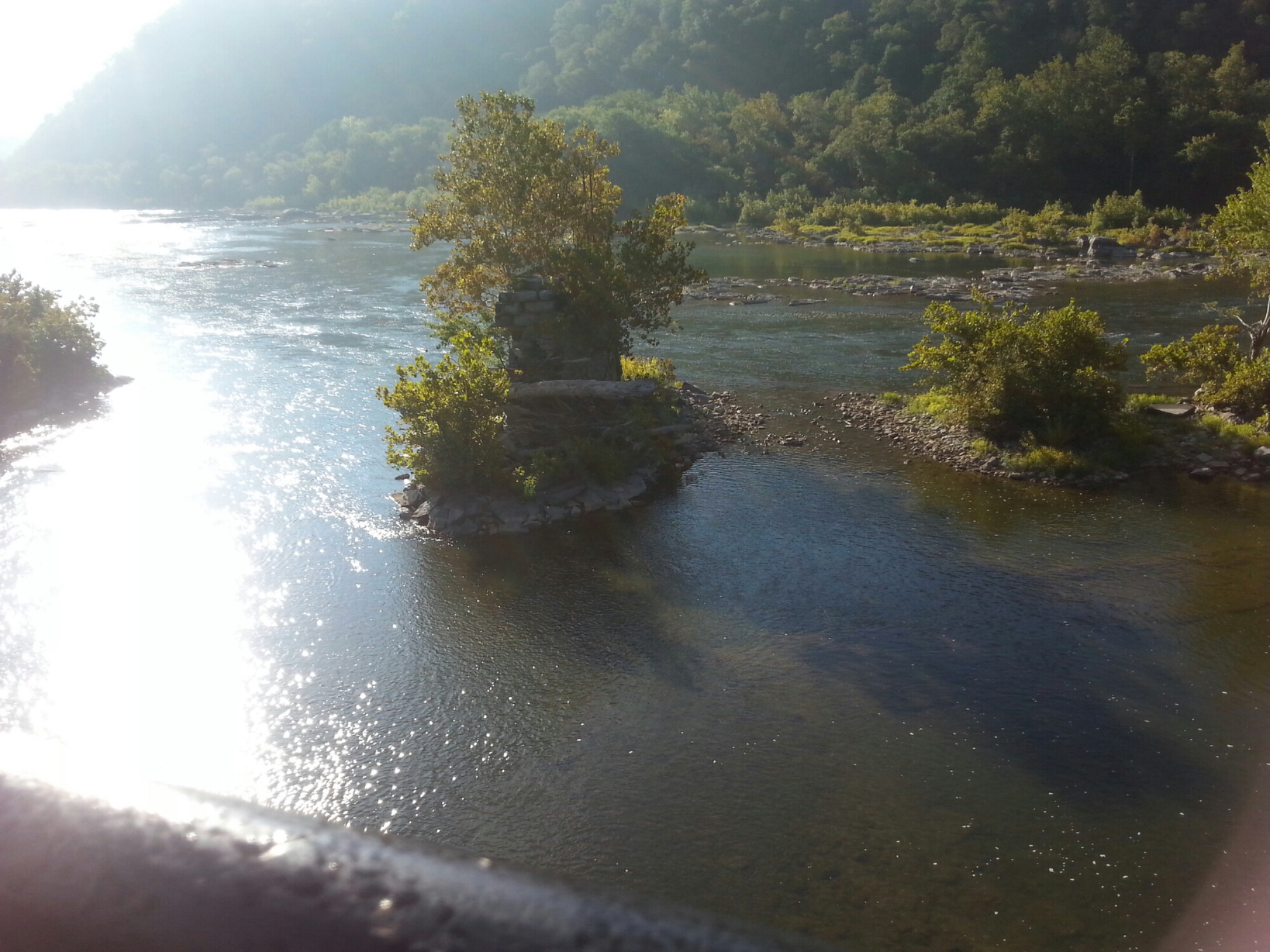 The next day I slept at the Ed Garvey Shelter and went into Harpers Ferry in the morning. This had been a week of straight 25-mile days to meet up with my friends Becky and Lisa, who live in DC, by the weekend. I had planned to take the train into DC, so I bought a piece of peanut butter cake and a loaf of pumpkin chocolate chip bread and ate it all while waiting for the train. I then heard some people saying the train had been delayed eight hours. I called Amtrak, and they confirmed the the frustrating news. I then called my friend Lisa, who drove an hour and a half to pick me up and take me back to DC. 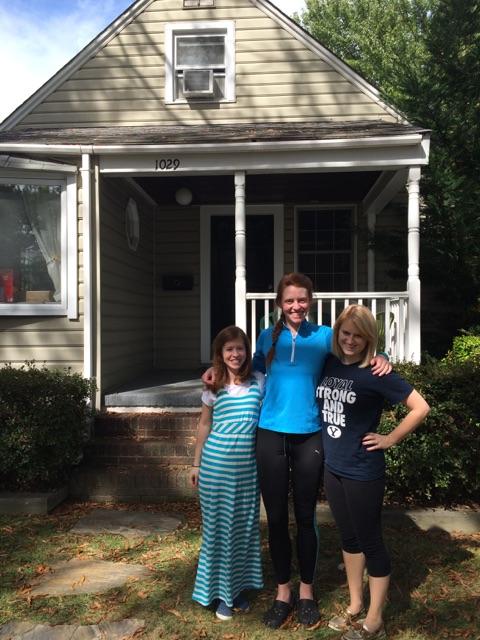 We met up with Becky and went to dinner and then to the monuments at night. The next day, I went to church with them, which was awesome because I hadn’t been in over two months, and it felt so good to be there. I wore my crocs and running tights, while everyone else wore skirts, but I felt perfectly welcome. 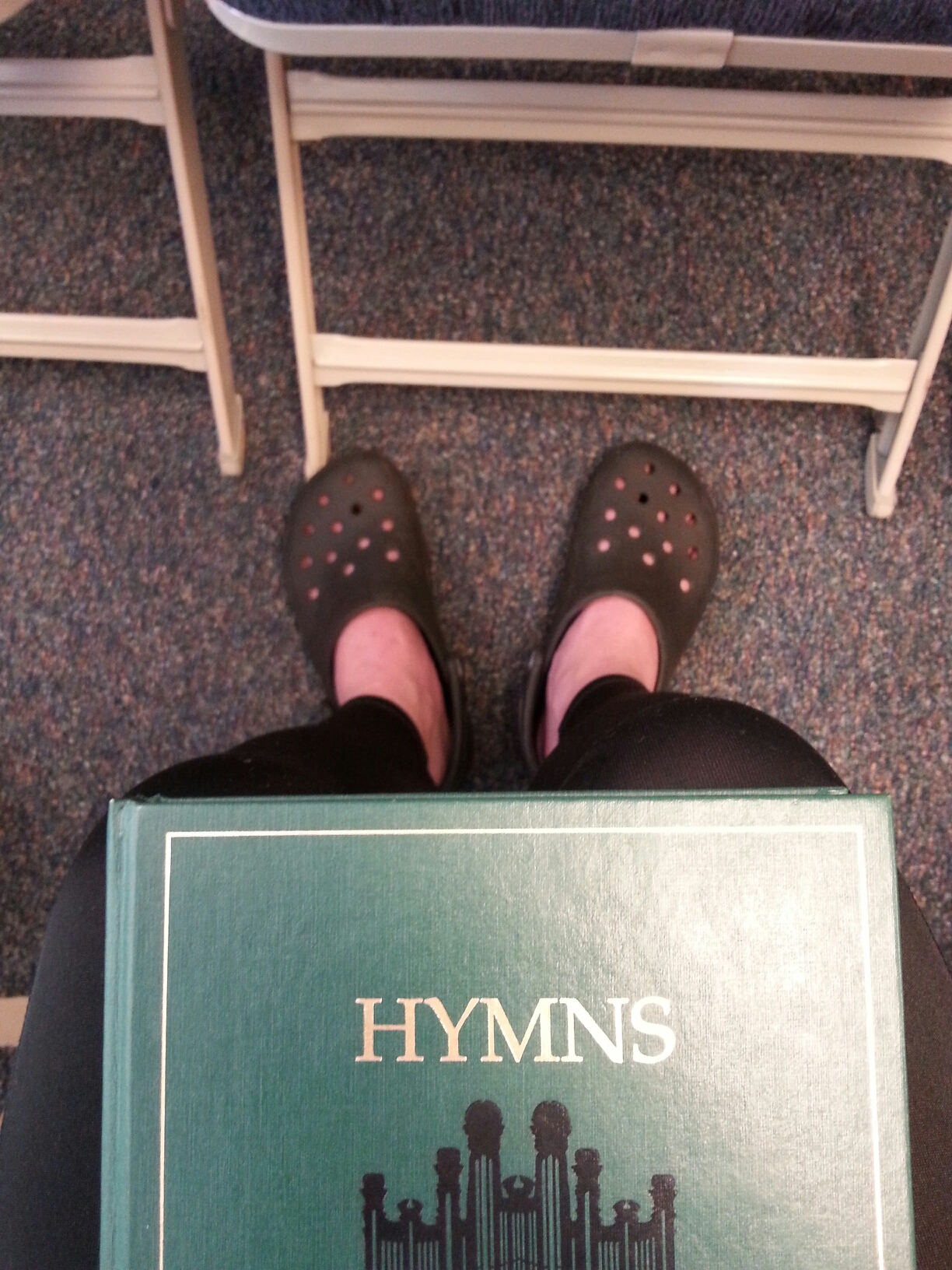 Rocking the crocs at church.

After church and lunch, we sat on the porch for a while and then Becky drove me back to Harpers Ferry, where I enjoyed some free food at the ATC and had my picture taken for the book. 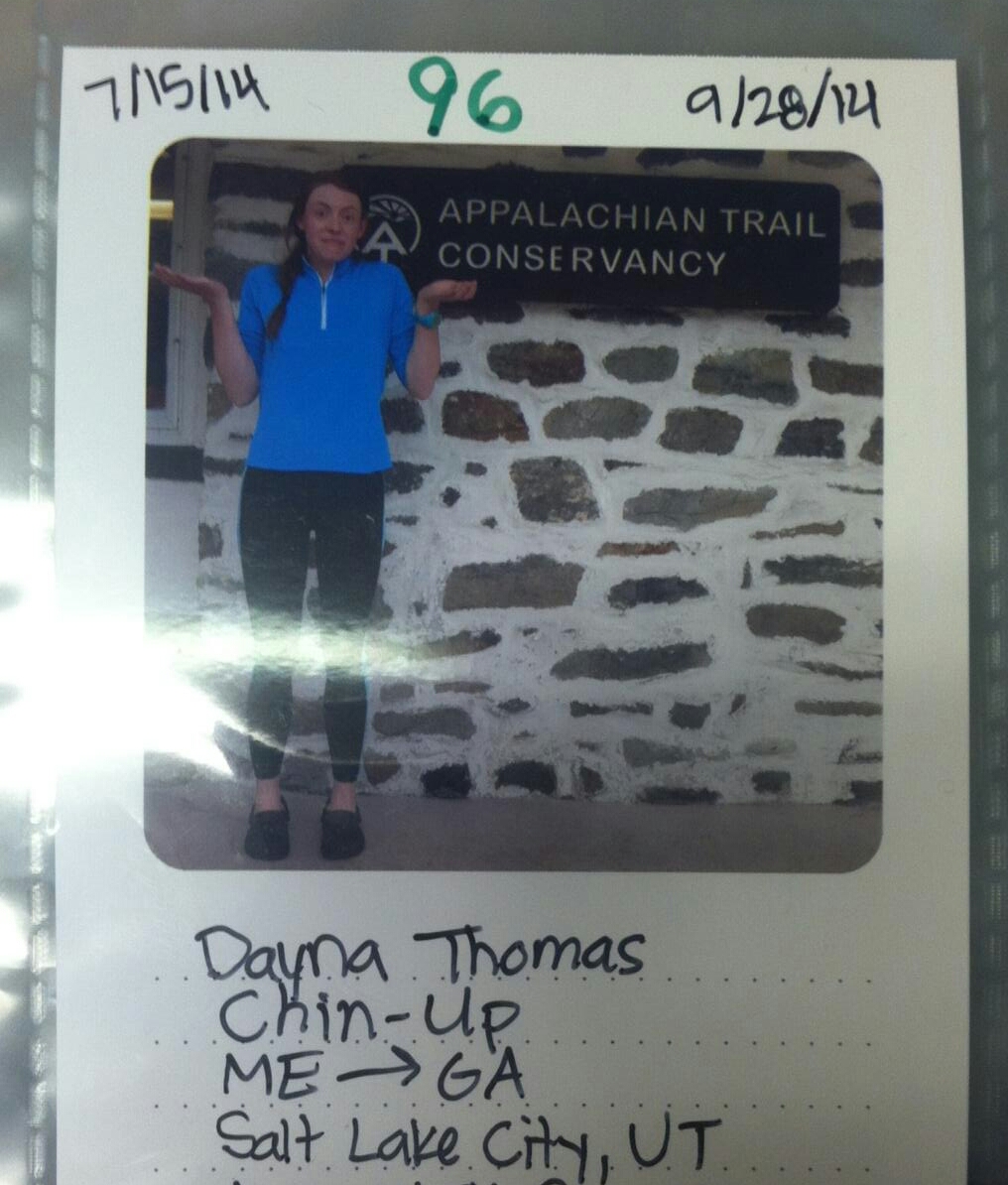 I have about 1000 miles left to go, and I think I’m really going to like Virginia. I even have my new tent! I have been loving the crisp, cool feel of fall, and I can see a light at the end of this tunnel. On to the South!