Halfway to Somewhere: Weeks 10-12 on the Trail

In my last post I left off in the town of Waynesboro, VA, where I took an unplanned zero day. Since then, I’ve hiked through the Shenandoah National Park and finished off Virginia, toured Harpers Ferry, completed Maryland, and reached the halfway point in Pennsylvania. See below for all the details and photos.

The Shenandoah: a Park Designed for Cars

The morning I entered the Shenandoah, a trail angel with the fitting name “yellow truck” (named after his, well, yellow truck) picked me and about 9 other hikers up from the free town campsite in Waynesboro. He demanded of us as we piled into his yellow truck, “I don’t care what your name is, I don’t care who you are, you all smell bad, but the girls are cuter. Now tell me where you’re from and what you do!” Quite the memorable greeting, but we were all grateful for the free ride back to the trailhead. 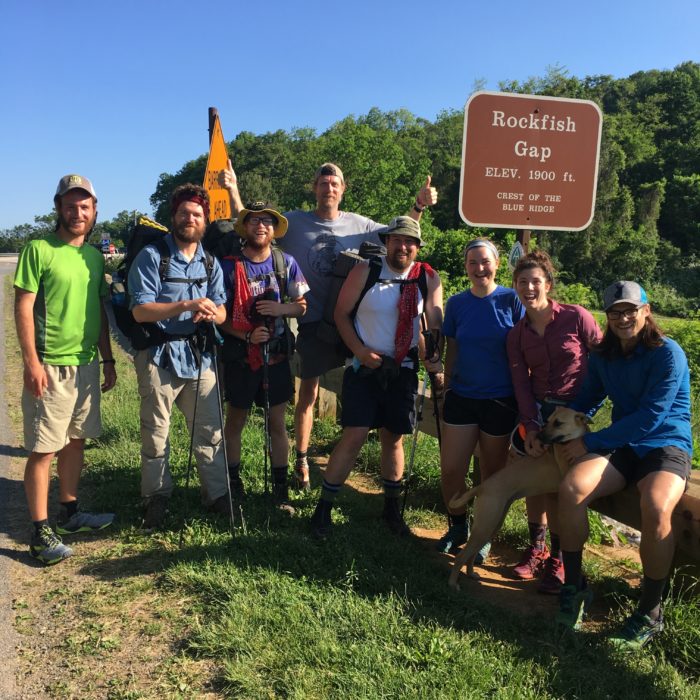 Some of the beautiful Hiker Trash I enjoyed the Shenandoah National Park with. Influx, me, Chiclet, Daddy Long Legs, Multitool, Bulletproof, Deep Cheeks, and Pom Pom

On a map, The Shenandoah NP is a very narrow but long national park that mostly consists of the Skyline Drive portion of the Blue Ridge Parkway. While the park offers a lot of great overlooks and scenic views, it’s my opinion that the park would be better enjoyed by car rather than on foot on the Appalachian Trail. Here’s why: on the trail, you crisscross Skyline Drive probably 5-10 times per day and cars are constantly audible or visible I’m trying to enjoy a peaceful wilderness trek along the AT. Furthermore, most (not all) of the viewpoints in the park require you to exit the woods and enjoy the view from a parking lot with all the cars. While the views are great, the experience can make for mediocre hiking, especially compared to the rest of the outstanding experience I had in Virginia. While the hiking certainly improved in the northern half of the park, with better views and better restaurants, it’s definitely a national park I’d rather re-experience in a car. 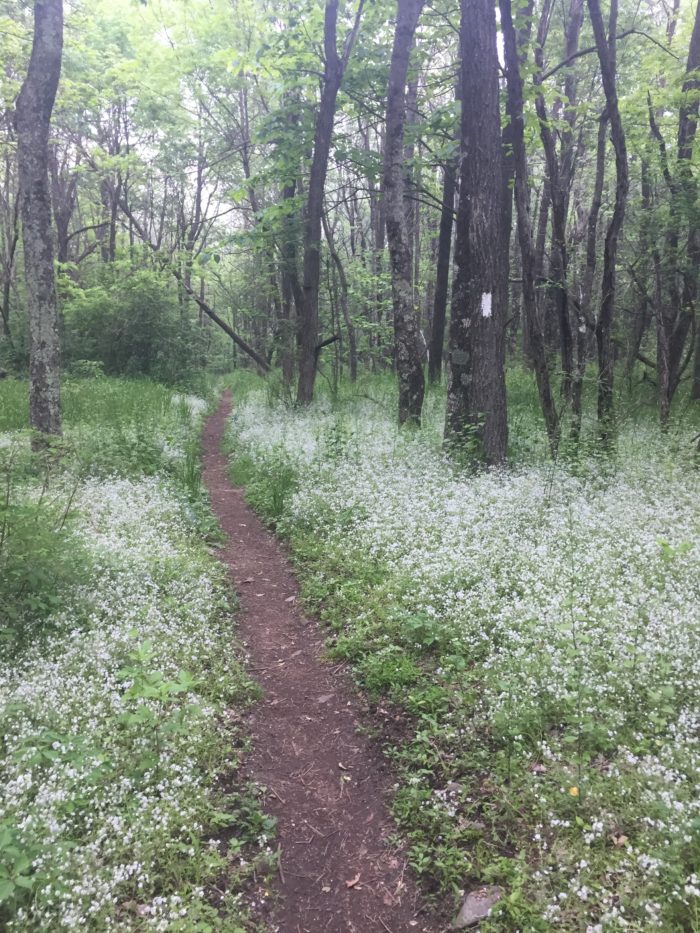 The green tunnel ain’t so bad after all 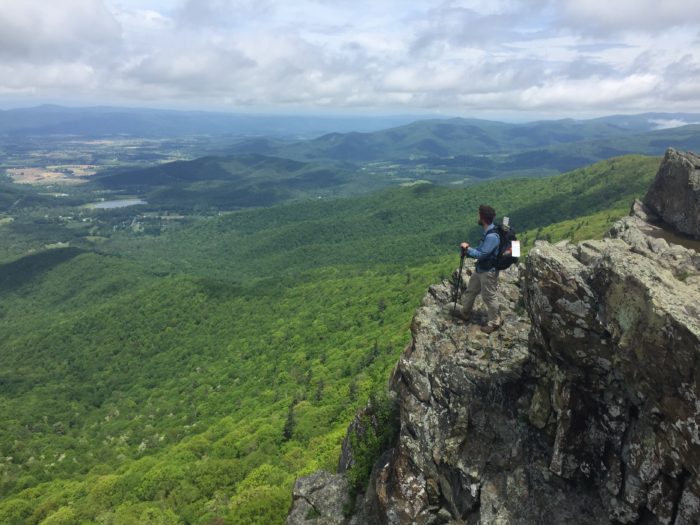 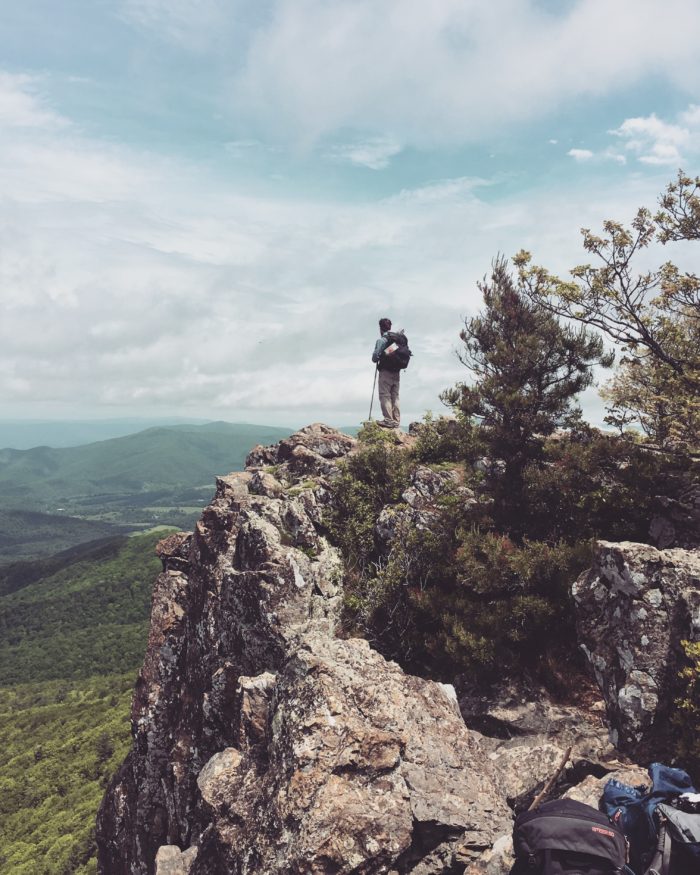 Despite the constant traffic, I enjoyed my time in the National Park immensely for 2 reasons: wildlife and waysides! Hunting is illegal in the Shenandoah, so wildlife abounds. The very first day in the park, I saw my first bear! As I was hiking, about 40 yards away from me, I saw a large animal turn and trot away from me as I moved. I stopped in my tracks when I realized it was a bear, but it appeared to be either a very small adult bear, or just a bear who hadn’t eaten post-hibernation. It wasn’t very big at all (and as such, wasn’t all that scary). I wasn’t able to get a great view of it, but I am glad to have checked that off my AT bucket list in a safe manner. I also saw probably 20 deer roaming while I was in the park. 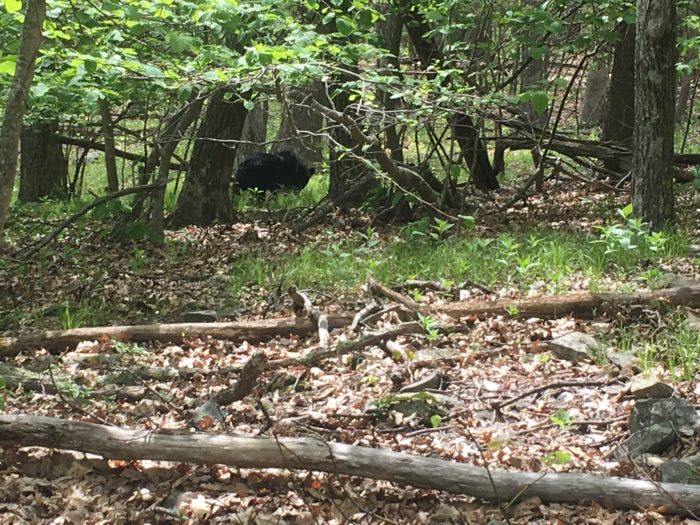 Bear!! Full disclosure, this picture was taken by Influx. I couldn’t get a good picture of the bear I saw 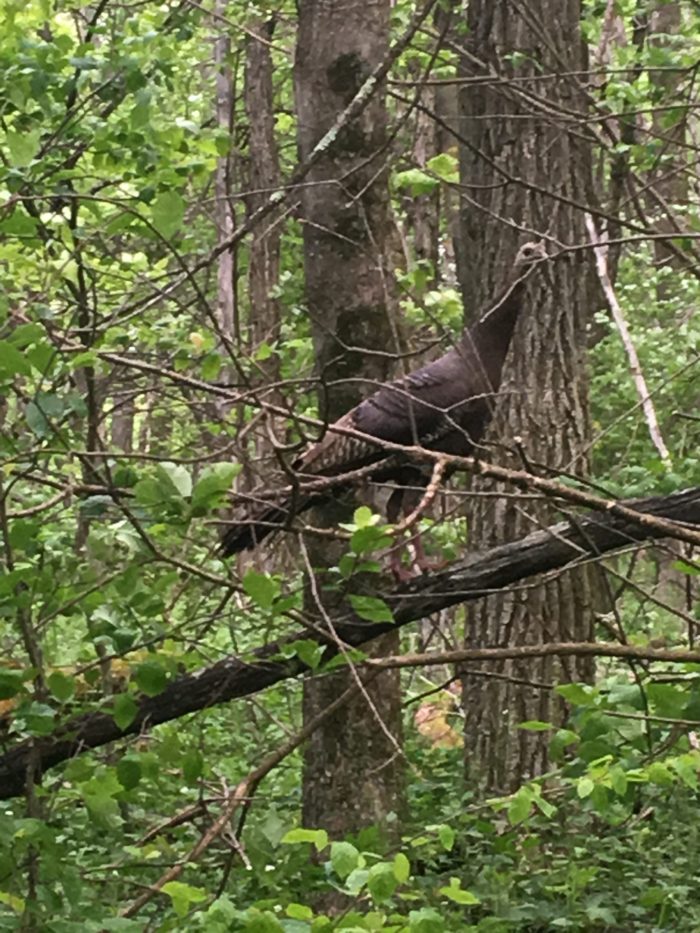 The waysides really made my SNP experience. Every 15-30 miles (so every day, pretty much), the AT crosses very near a wayside (which is like a roadside convenience store with a short order grill), a campstore, or a park lodge with a restaurant. This combination is absolutely the reason why thru hikers rave about the Shenandoah. For an entire week, all I had to carry in my pack was enough snacks to get me to the next store. With barely anything in my pack, I felt like I could fly! One night at the Big Meadows Lodge, I ate an entire 16″ pizza by myself. The very next morning, 10 miles later, I ate 4 plates in 30 minutes at the all you can eat breakfast buffet at the Skyland Inn. Oh yes, the hiker hunger is very real. 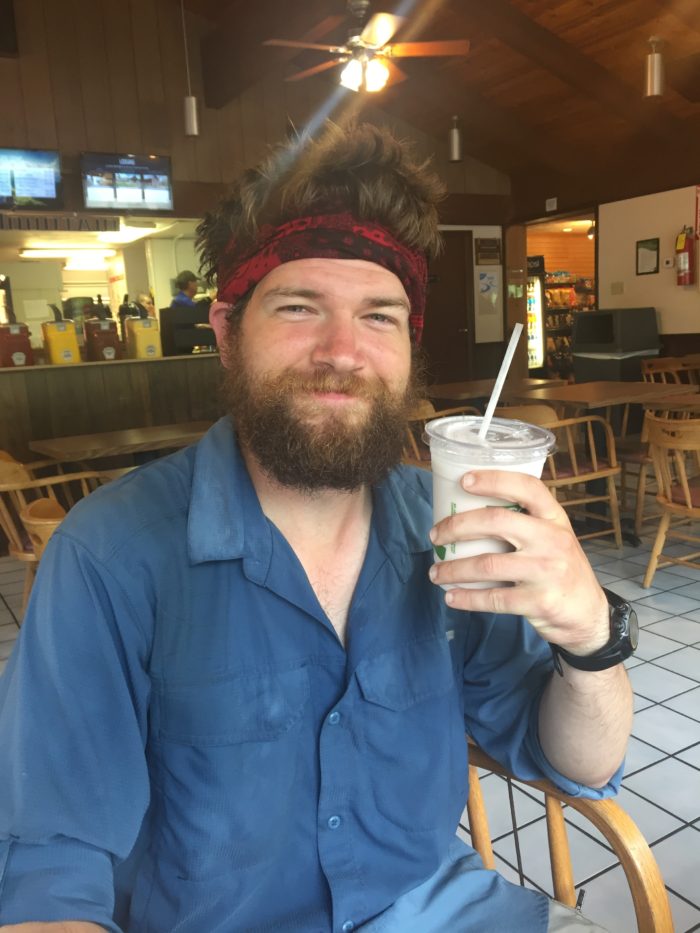 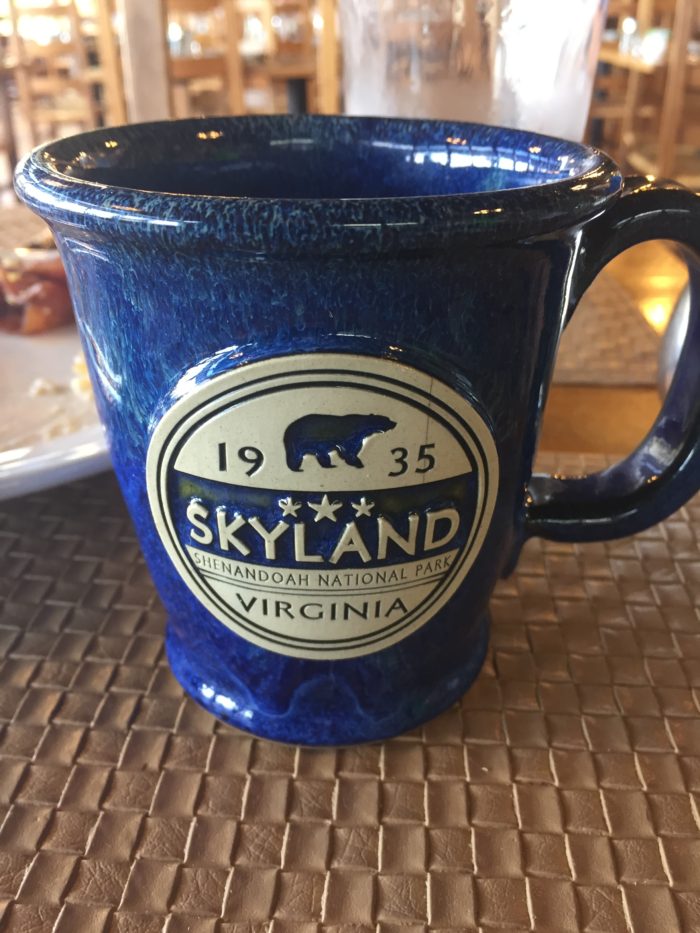 All you can eat breakfast please!

After completing the Shenandoahs (and a quick doctor’s visit to clean out an ear infection…), Virginia hurled one last obstacle my way: The Roller Coaster. 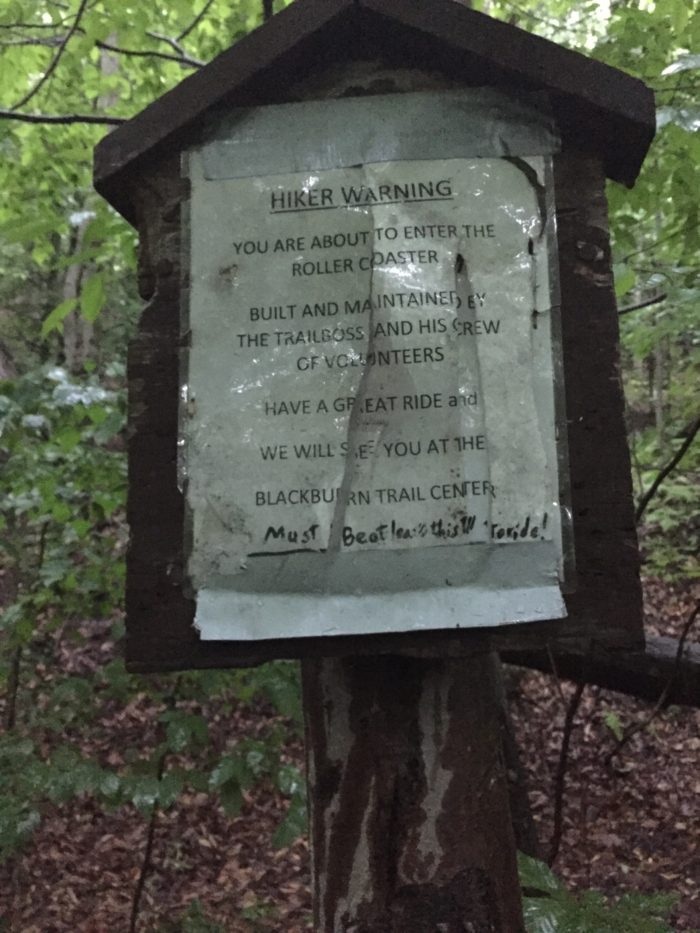 Named for its 13 short but steep ascents and descents, the Roller Coaster is a brutal section, full of rocks, motivation-stealing ascents, and empty of any views. I’ve definitely been on more thrilling roller coasters! Thanks for the memories Virginia! 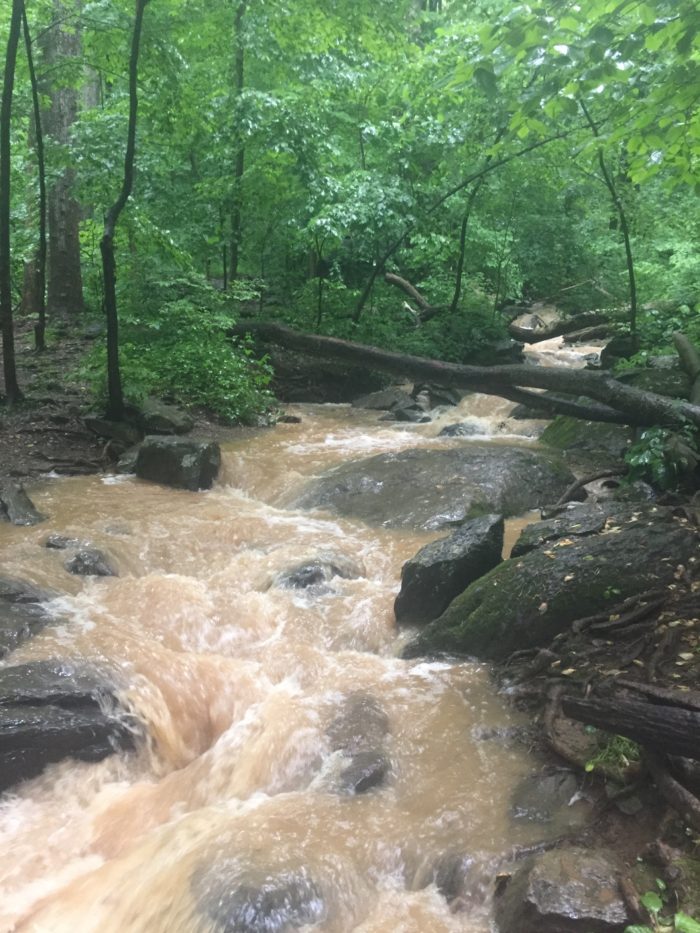 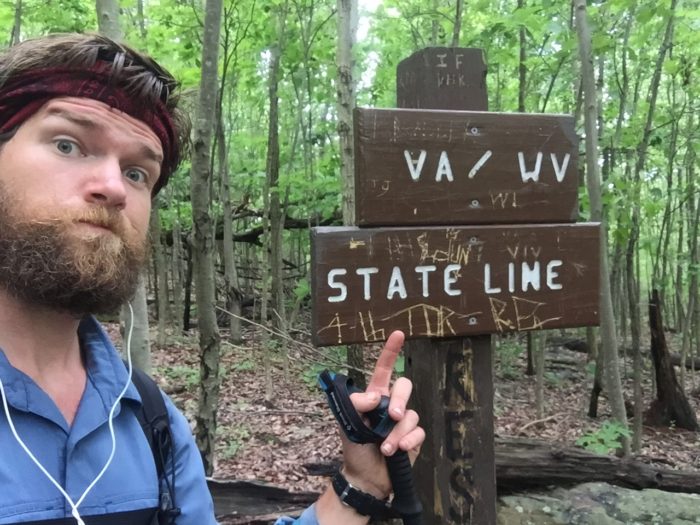 The sense of accomplishment I felt after finally leaving Virginia after over 550 miles was indescribable.

West Virginia only has about 5 trail miles in the state, but the historic town of Harper’s Ferry and the Headquarters of the Appalachian Trail Conservancy have earned the town the title of the “psychological half way point” on the trail (since it’s still about 70 miles to the official halfway point). My first stop in town was at the ATC, where I had my picture taken and entered the logbook as the 403rd Northbound thruhiker of 2017 (I was hiker #764 at Amicalola State Park in Georgia). 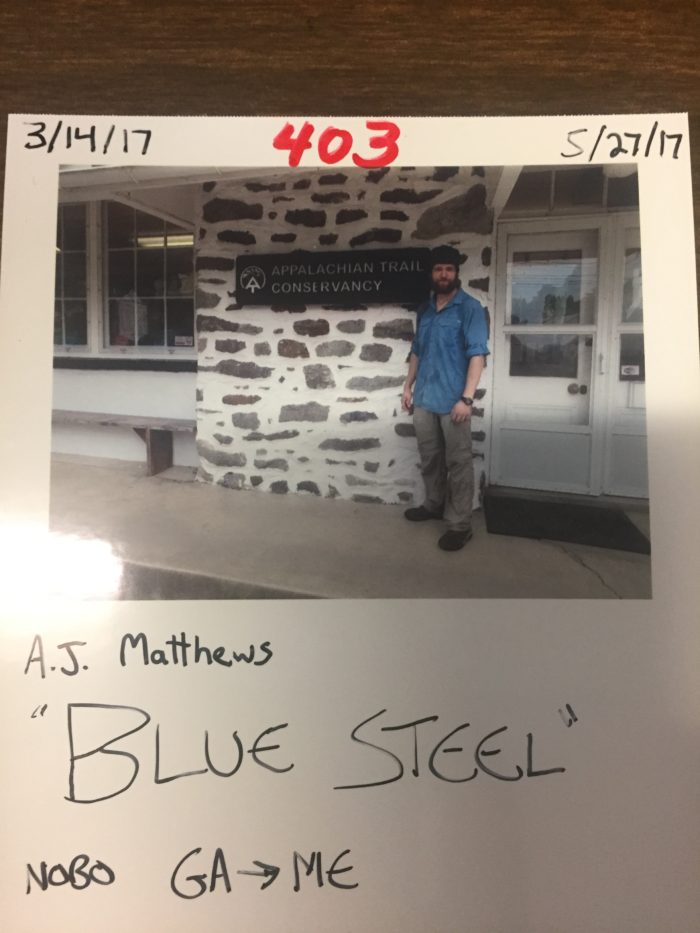 I decided to take two days off in Harpers Ferry since the town is a National Historical Park. The first day I did my normal hiker chores: laundry (while wearing rain clothes of course), shower (twice… still smelled bad), resupplied on food (thanks to Multitool’s nephew for the ride), replaced the tips on my trekking poles (there’s always some piece of gear that needs to be tinkered with in town), and, most importantly, ate anything and everything in sight. 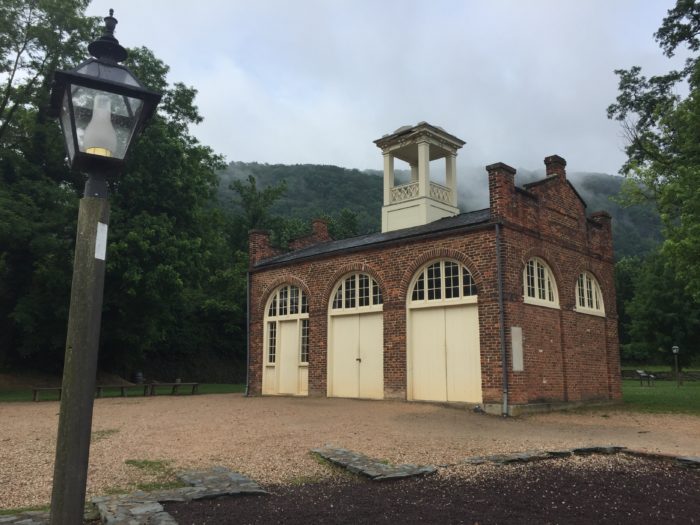 The firehouse where John Brown was captured

The second day I played tourist. If you’ve never been to Harpers Ferry, and you like history, I’d highly recommend it! While the Appalachian Trail walks directly through the historic district, I wanted to spend the time to really enjoy all of the museums. The historic district has about 10 preserved buildings that serve as museums and paint the picture of the former location of the US Armory. The town played a key role during the Civil War, and changed hands 8 times during the conflict. The highlight of the historical park is of course John Brown’s Raid on Harpers Ferry, the failed 1859 uprising that served as one of the final catalysts that brought the nation to war. The firehouse where John Brown and the last of his men were finally captured is still standing. For a history nerd like me, I loved every minute visiting the museums; an awesome way to spend a day off the trail! 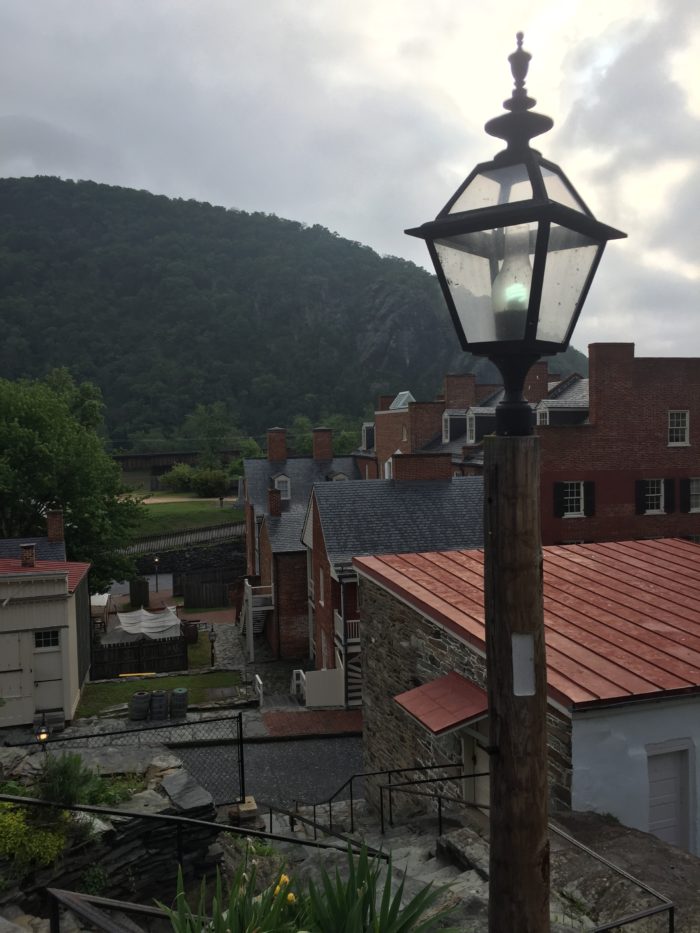 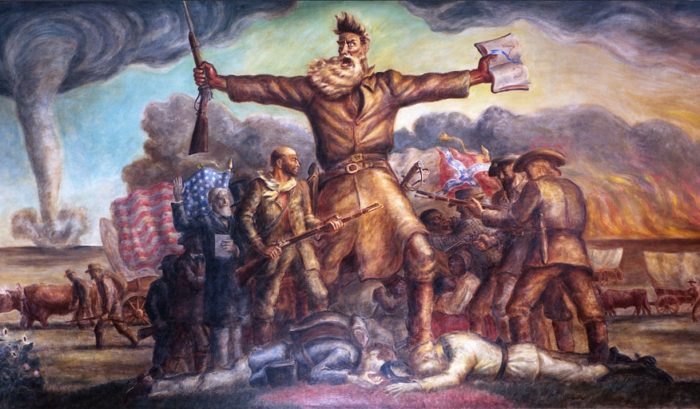 I have serious beard envy of John Brown’s beard

Mary’s Land: Don’t Sprint on Me

Maryland doesn’t get much love from former thru hikers. Probably because it’s only 40 trail miles. Probably because a lot of thru hikers attempt the four state challenge (where you start in VA and attempt to hike all the way to Pennsylvania, a 45 mile distance, within a calendar day). Even though I was only in Maryland for 2 days and 1 night, the state left a positive impression on me. 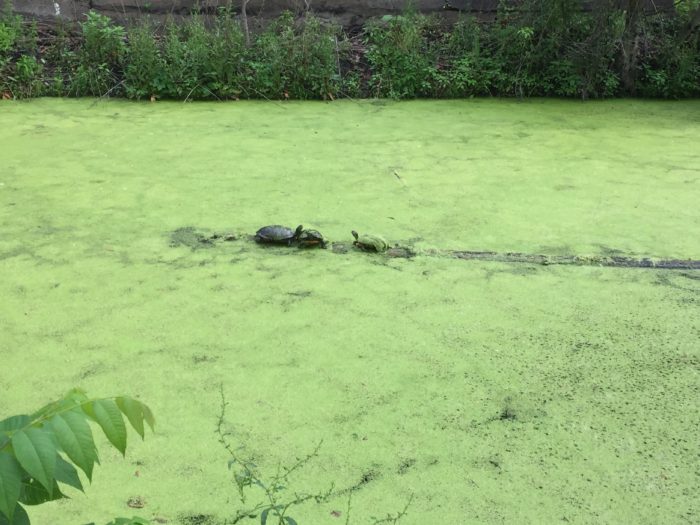 Turtles in Green Ooze? Where have I seen this before?

Pleasant, easy hiking, two fantastic state parks (Gathland and Pen-Mar), lots of Civil War Trails history signs, and one fantastic sunset from Annapolis Rocks highlighted my all too brief time in Maryland. I just don’t know why hikers try the 4 state challenge and skip over taking the time to enjoy the beauty Maryland has to offer! 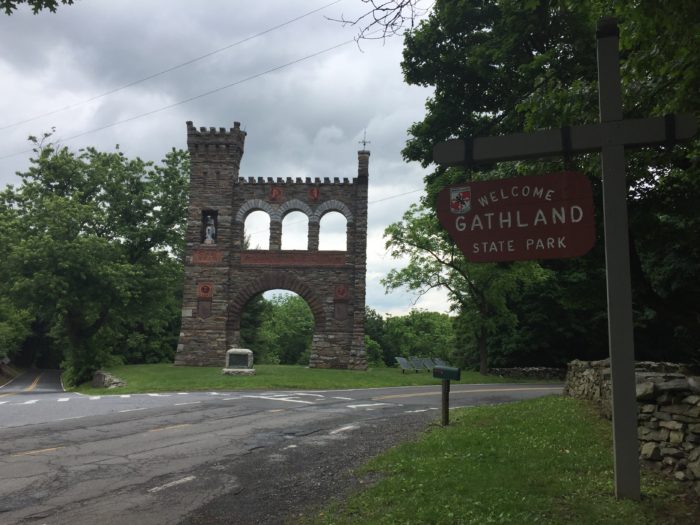 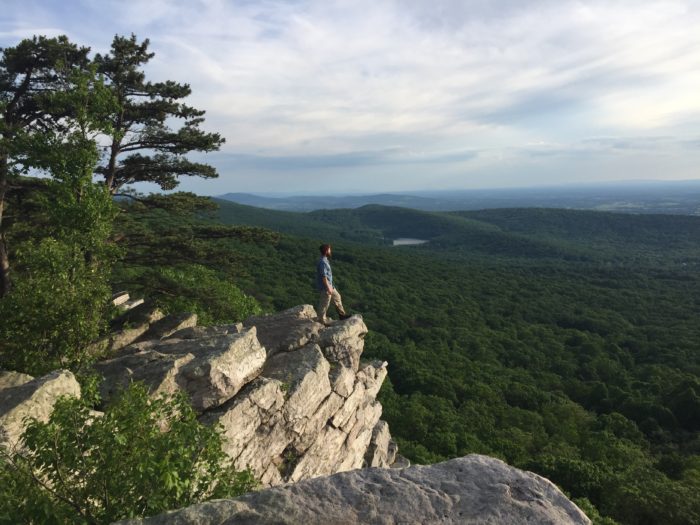 The view from Annapolis Rocks 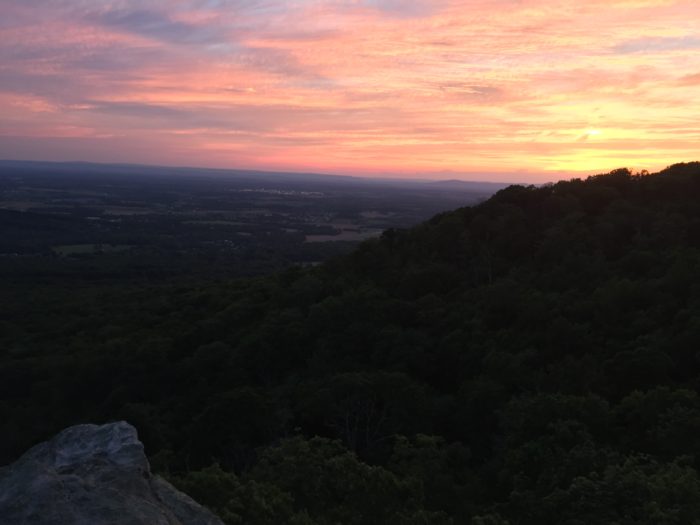 Welcome to the North! The accents have changed and the southern drawl is gone. The trail I’m walking is now pronounced “App-a-lay-shun,” the way I’ve always pronounced it. While the terrain hasn’t changed dramatically yet, the shift in culture is subtle but apparent. I’m still in Appalachia. Small towns and rolling hills. Just north of the Mason-Dixon Line. 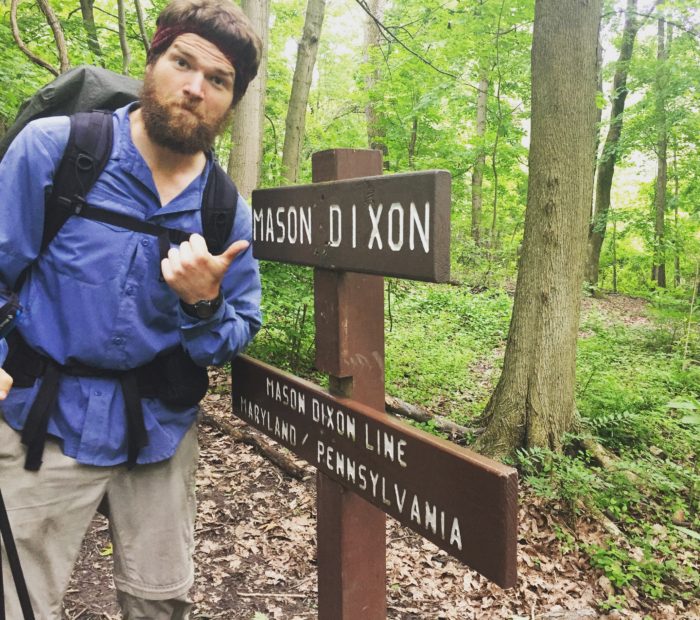 Pennsylvania’s trail is known for its rocks, but the southern portion of the state has been the absolute flattest part of the trail so far in my opinion. It’s been a hiker’s delight. The farmland we’ve traversed has been easy and iconic Americana. So far, Pennsylvania’s been splendid (I know all that will change once I reach the dreaded rocks in northern half of the state). 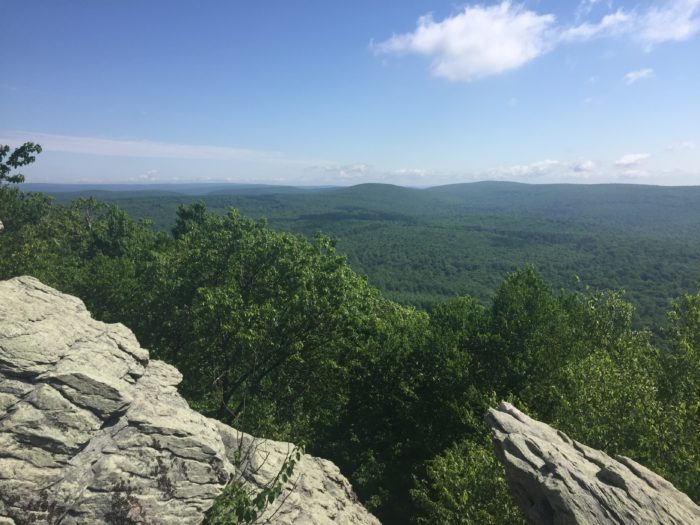 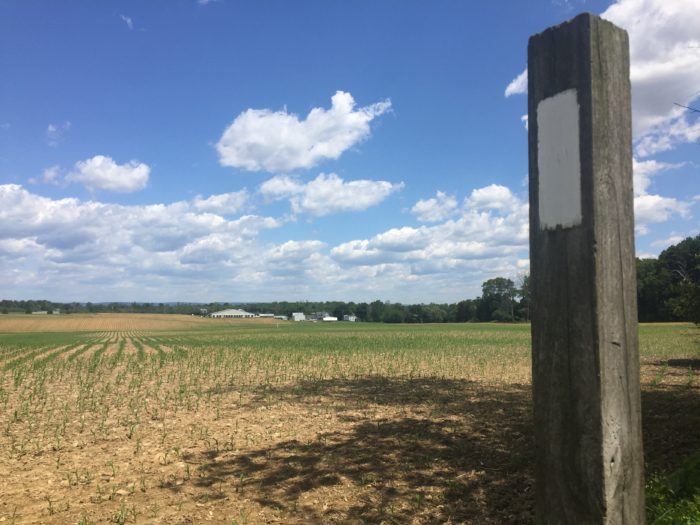 I Scream for Ice Cream

The half gallon challenge awaits all hikers who reach the official halfway point at pine grove furnace state park. I don’t know the origin behind the tradition, but I now know from experience, a half gallon is a looooot of ice cream! Those tubs of ice cream you get at the store? Yeah, that’s only 1.5 quarts. You need to eat another pint of ice cream for an entire half gallon. While I’d always wanted to eat an entire tub of ice cream as a kid, I got a chance to do just that (and also to immediately regret it). 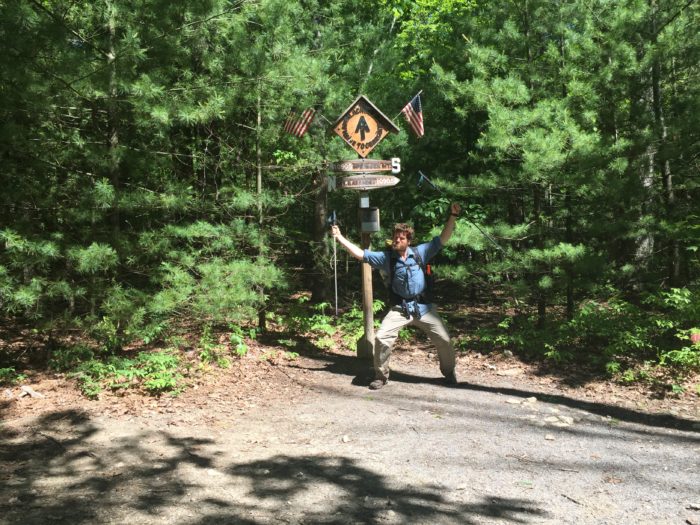 Moose tracks was a poor choice. Yeah, it’s a great ice cream, but not to eat entire tub. I had a bold strategy for completing the challenge: once the sides of the tub melted a bit, I turned the brick of ice cream on its side and rather than scooping it out I went in on the block directly with my face (beard and all). 2/3rds of the way through every bite became a chore. But I, like the great hiker trash before me, persevered and crushed that tub! The entire half gallon took me 53 minutes. I’m so proud/ashamed of myself! 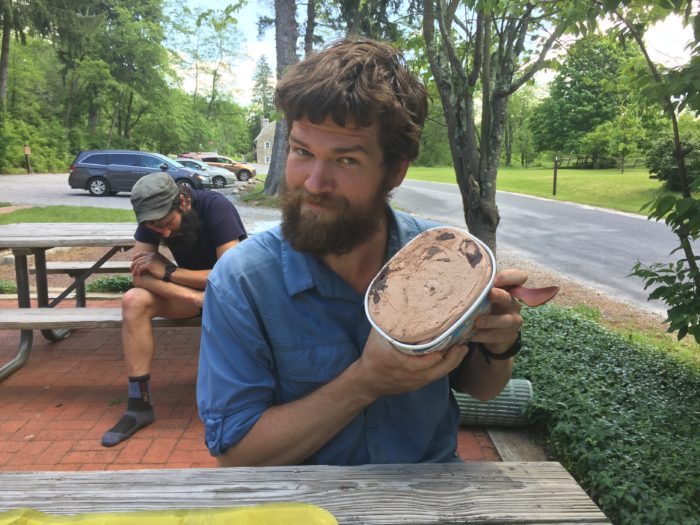 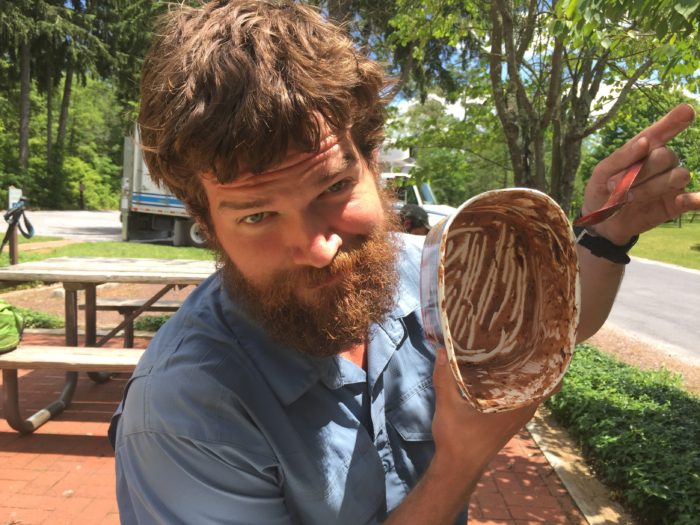 What I’m Reading/Listening to:

I can’t believe I’m halfway finished with my trip of a lifetime. I’ve got so many great memories (and a few miserable ones), and I can only look forward to what the 2nd half of the trail has to offer. My resolve to finish my hike is stronger than ever!

Up next is all of the rocks in northern Pennsylvania and bear country in New Jersey. Stay tuned!