We woke up to see the sunrise through the windows of the cabin, and Piñata went up to the roof platform to get pictures. We took our time sleeping in and making breakfast. I stayed after Rash, Piñata, and Chef Boyardee left to tape my pinky toes. My left toe is red, a little swollen, and tender. The morning hiking wasn’t terrible, even with my late start. The berry bushes are covered in green berries, getting ready to ripen. 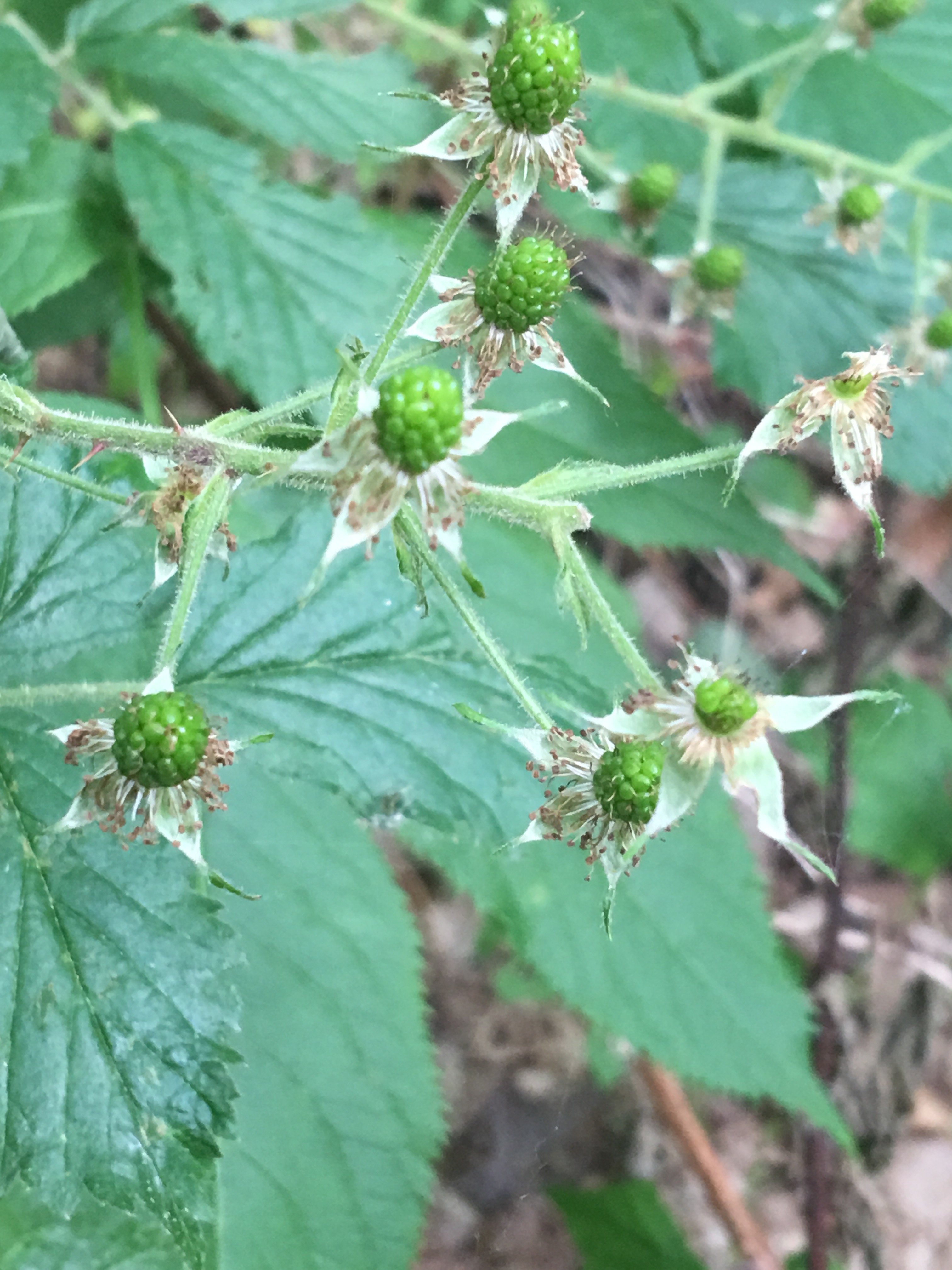 I met my first SOBO thru hiker, and stopped to chat with him about the Whites. I came to a parking lot, and met a couple who were day hiking. They offered me an apple, which I gladly took. It was big, sweet, and tasted amazing. Today celebrates being on the trail for 4 months, and the apple was a good way to celebrate. 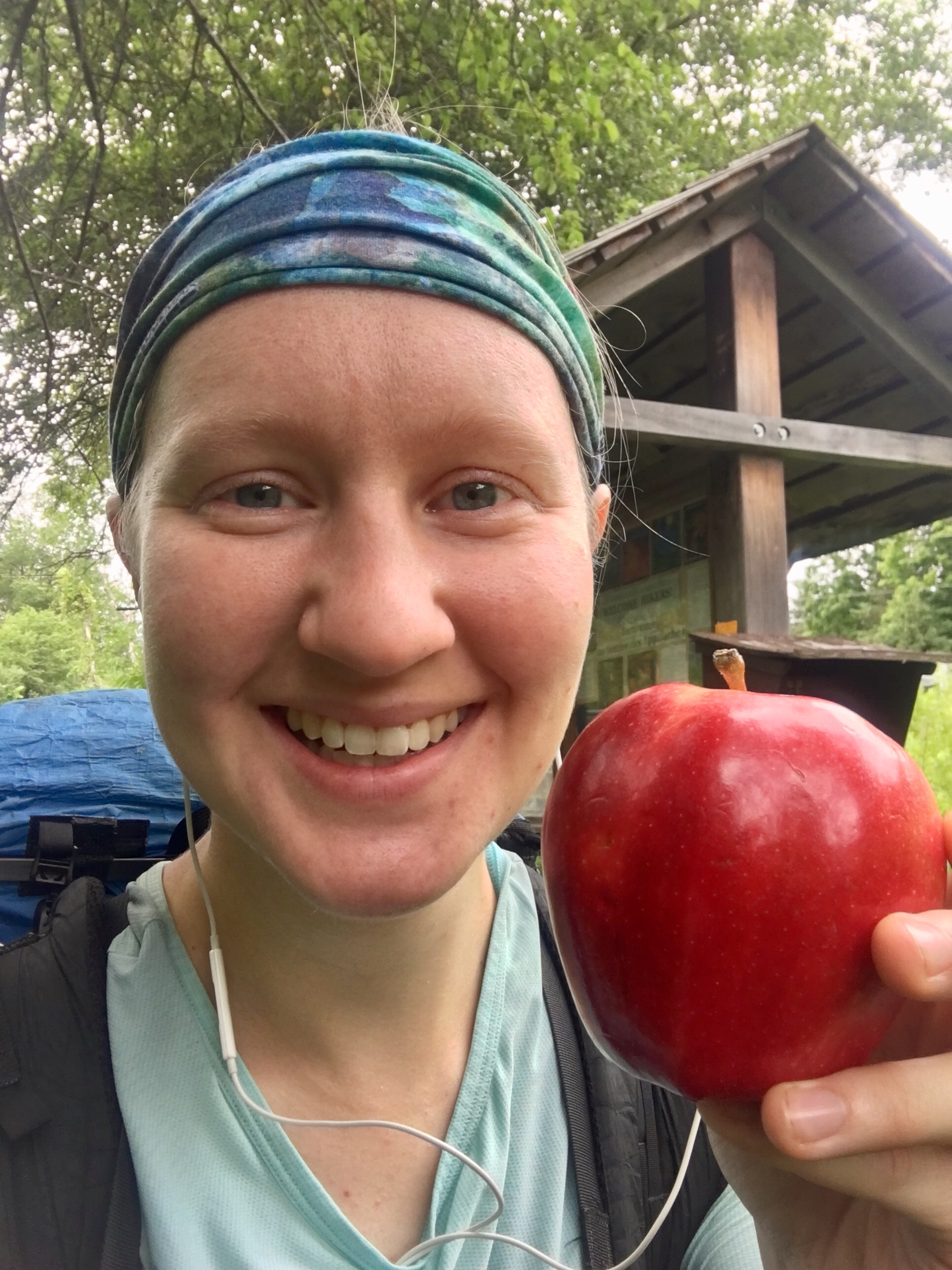 It started raining in the afternoon and started to get cold. I don’t mess around being cold and wet from the incident back in Virginia, so I layered up with my long sleeve and rain jacket. Coming over a hill, I heard barking, and found a huge Anatolian Mastiff running at me. He was barking and growling, and every time I moved, he lunged. He stopped 50 feet away. I was on the phone with Louis, and I was furious. He was obviously not a friendly dog and should not have been running free. There was another black dog running around. I tentatively walked over the hill into the forest, and found the owner calling to the dog (who was ignoring him). I hurried down the hill, and the black dog ran after me and tried to nip my heels.

I made it to the shelter, and found Rash, Piñata, and a hiker named Trinket. As we were making dinner, we met Chief and Doc. Doc thru hiked in 1975, and Chief was section hiking with Doc’s support. Chief is the retired police chief of Christiansburg, and has Parkinson’s. Doc is the state veterinarian for Virginia. We had a lot of interesting conversations that evening. 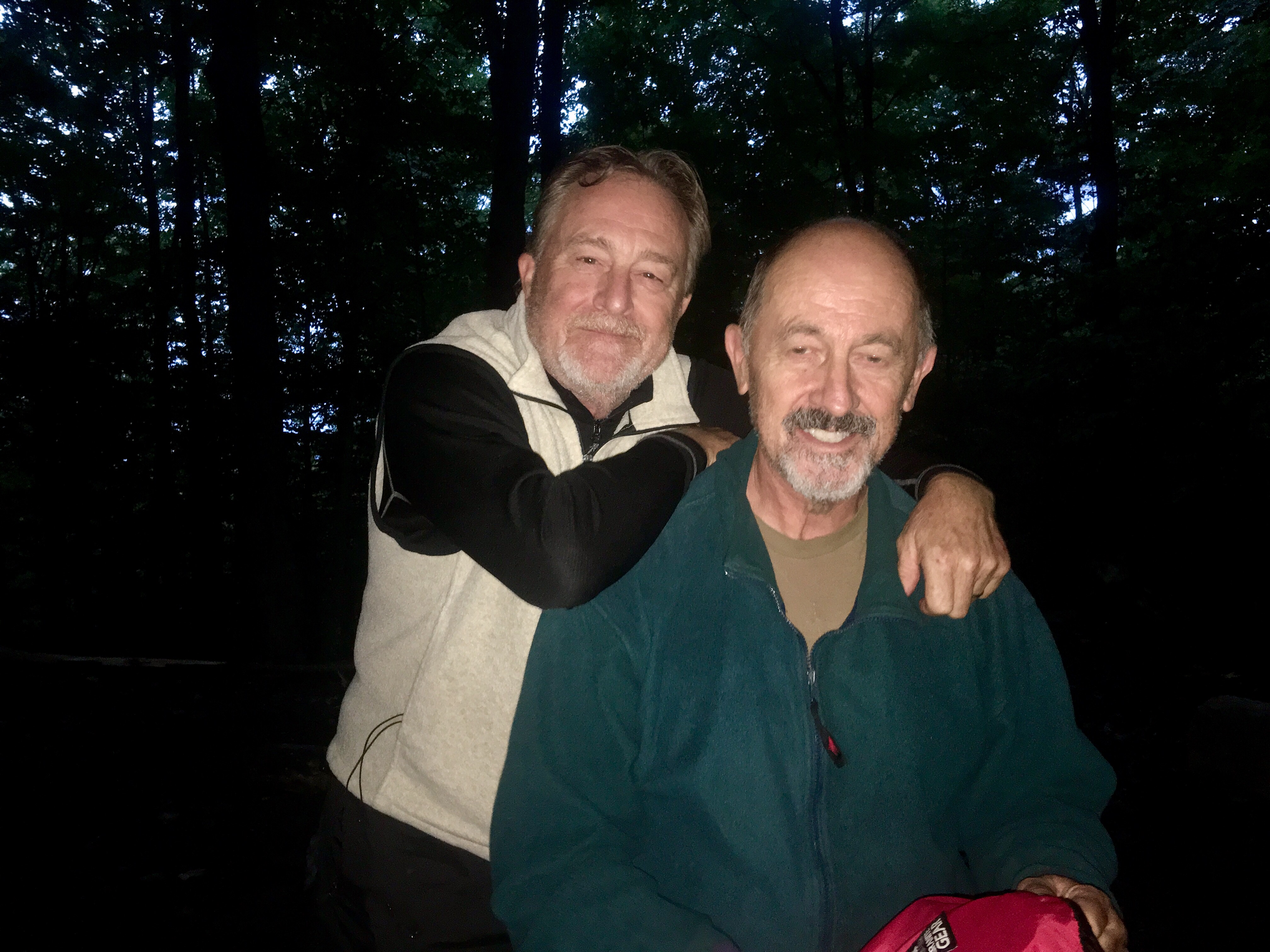 I woke up to the crinkling of Trinket’s ground tarp under her mattress. We thankfully did not have any bear visitors last night, and despite being in the shelter, I slept pretty well. We made breakfast and packed up to go. On the way out, I stopped to use the famous privy that was transported here after another shelter was dismantled. 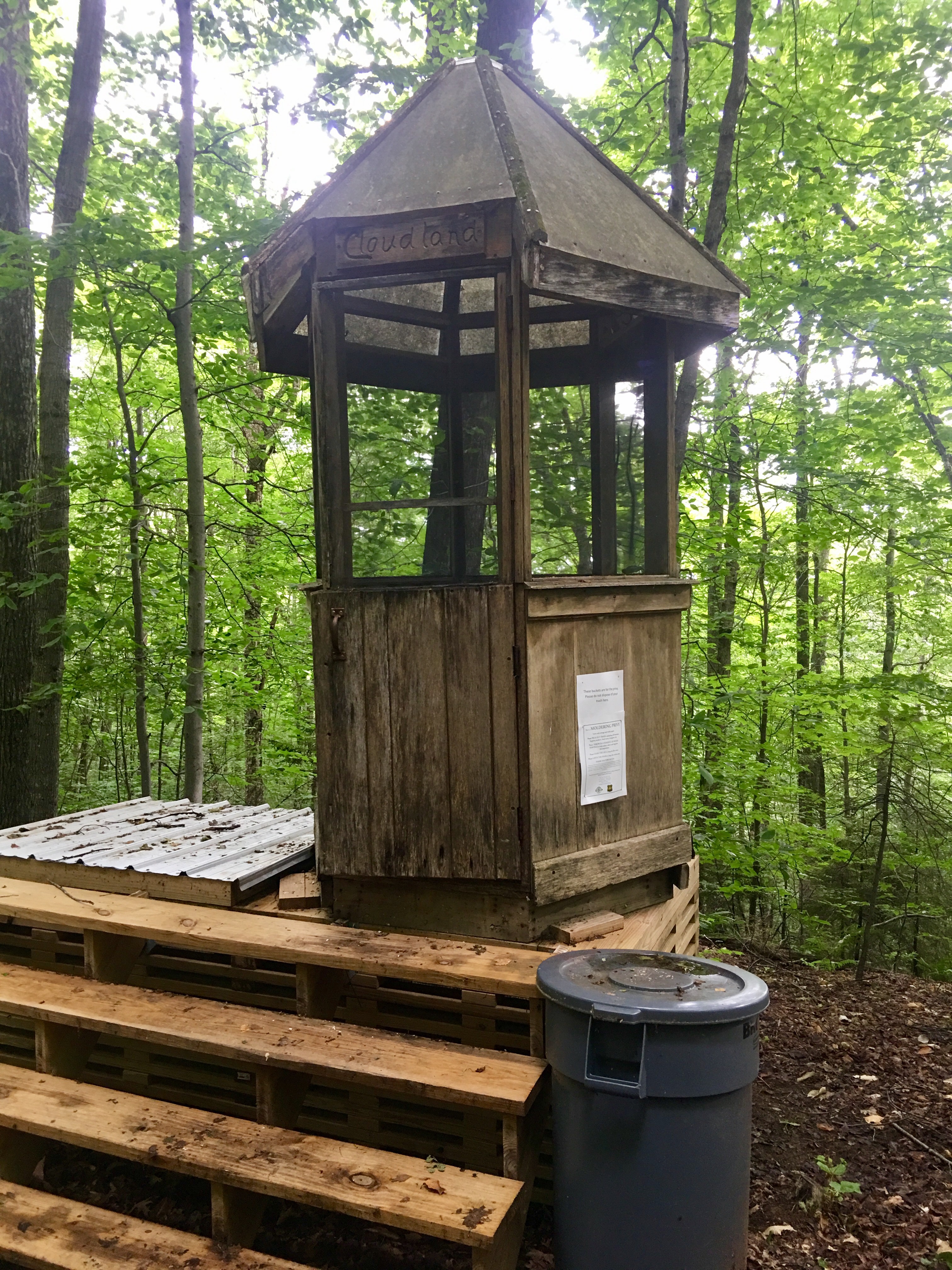 The weather was calling for storms later on, but starting out, the hiking was beautiful. I descended into West Hartford, and as I was walking alongside the road, I heard shouting. I found Rash and Piñata with some other hikers shouting and waving from the front porch of a house nearby. I walk towards the house and was greeted by an old black lab, barking up a storm. A nonhiker, Randy, asked if I wanted breakfast, and I happily said yes. Rash and Piñata were with Chef Boyardee (who we now call Ravioli), and Trinket. Linda and Randy own the house and use it as a free hostel for hikers. 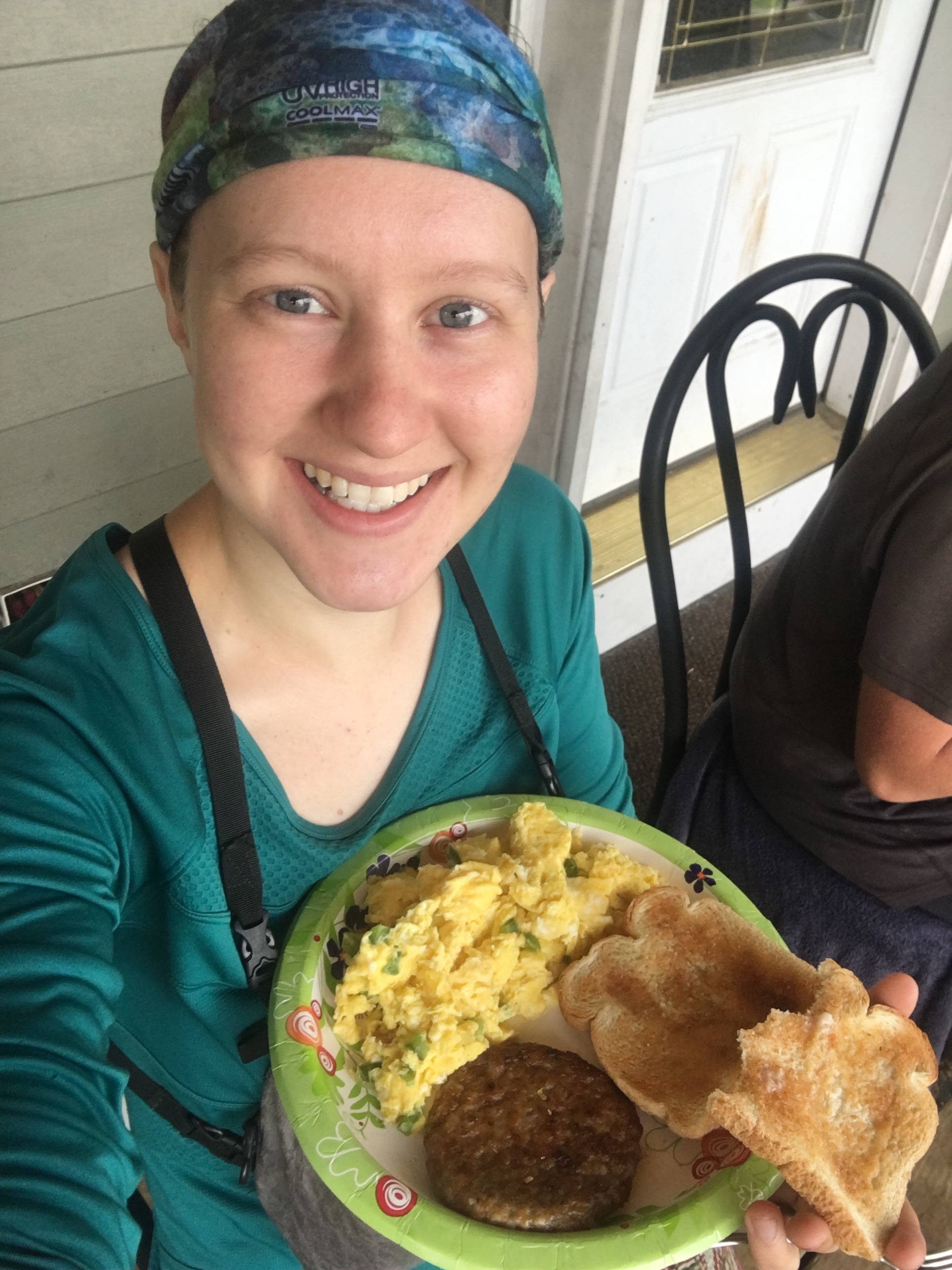 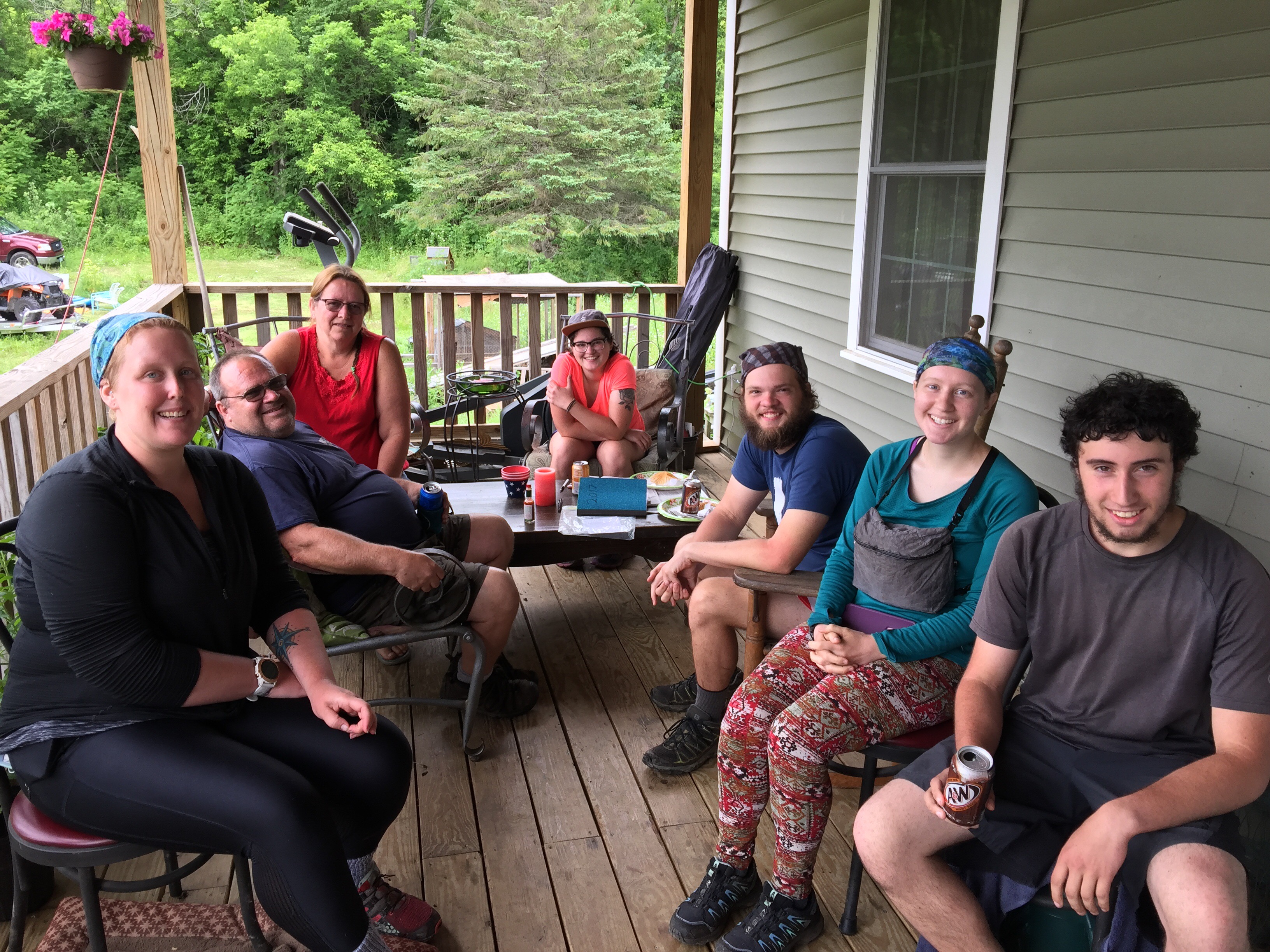 After hanging out for a while, Tip arrived. He ate breakfast and went on his way, and we followed. Thankfully, the storms held off, despite the dark skies. Just before town, I was passed by another hiker with a French accent. His name is Froggy, and he’s from Toulouse. We spoke French and hiked together into town. There were coolers sitting on driveways of houses lining the AT, and I ate some banana bread. Froggy stopped at a store, and I walked to the VT-NH border on a bride overlooking the Connecticut river. I waited for Rash and Piñata, who were resupplying at a store I missed, but it started raining, so I headed for shelter in town. 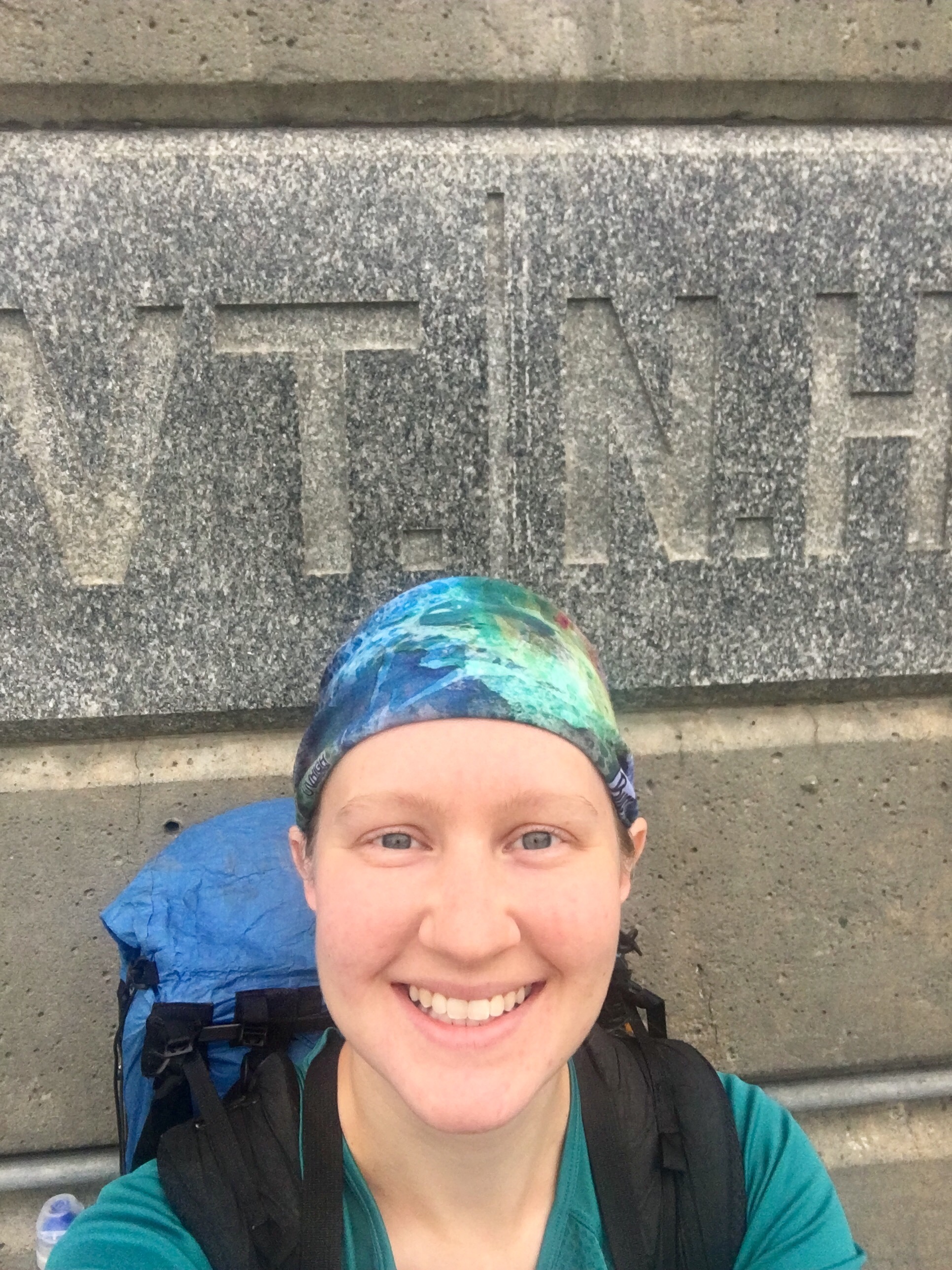 Hanover is a hiker friendly town, but full of visitors since Dartmouth is there. I was stared at by everyone, and I felt a little like a zoo animal. I stopped to get a free pasty at Lou’s bakery, and got a free piece of pizza at Ramunto’s. I waited for Rash and Piñata sitting on a bench outside the pizza place. 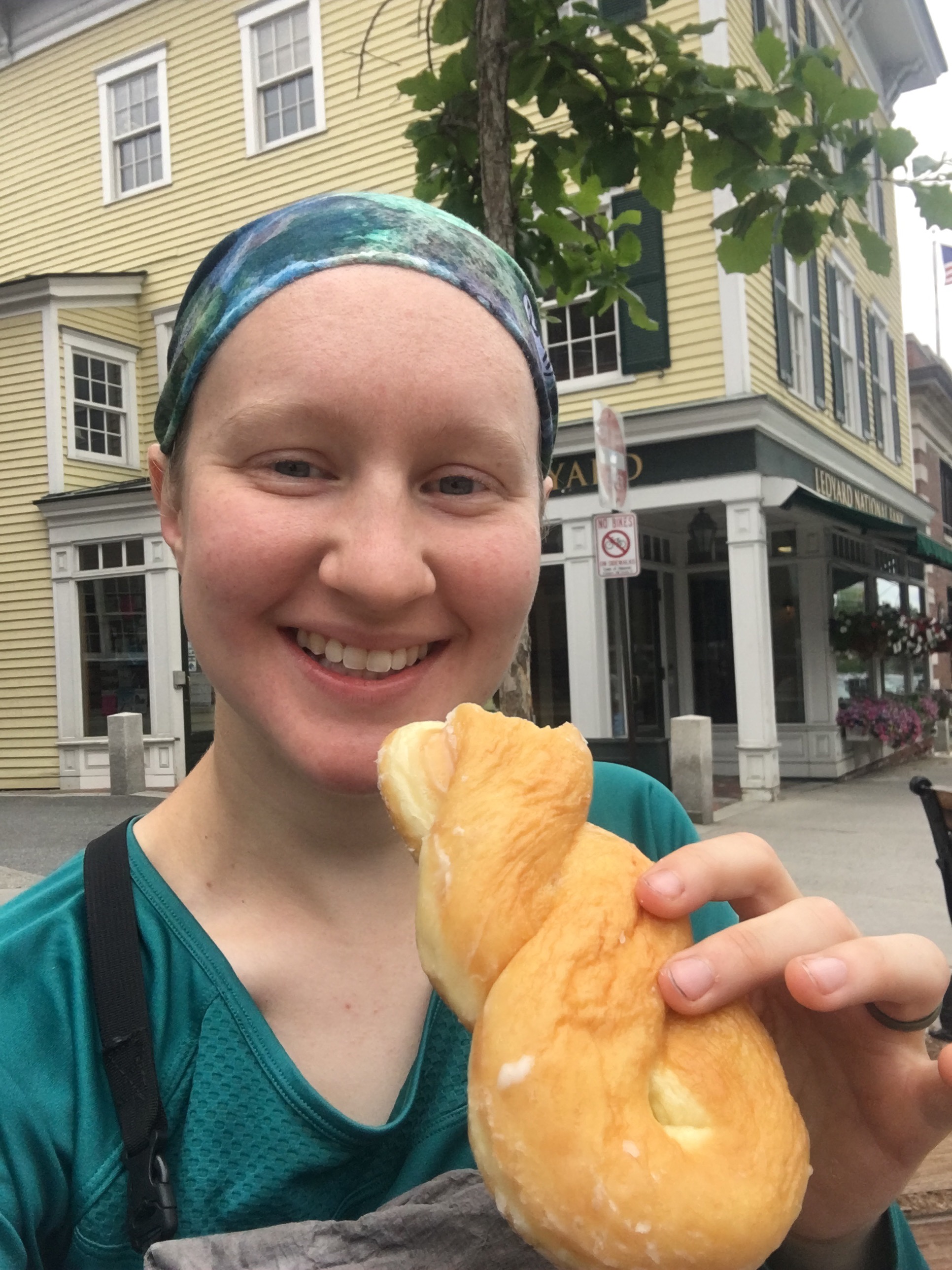 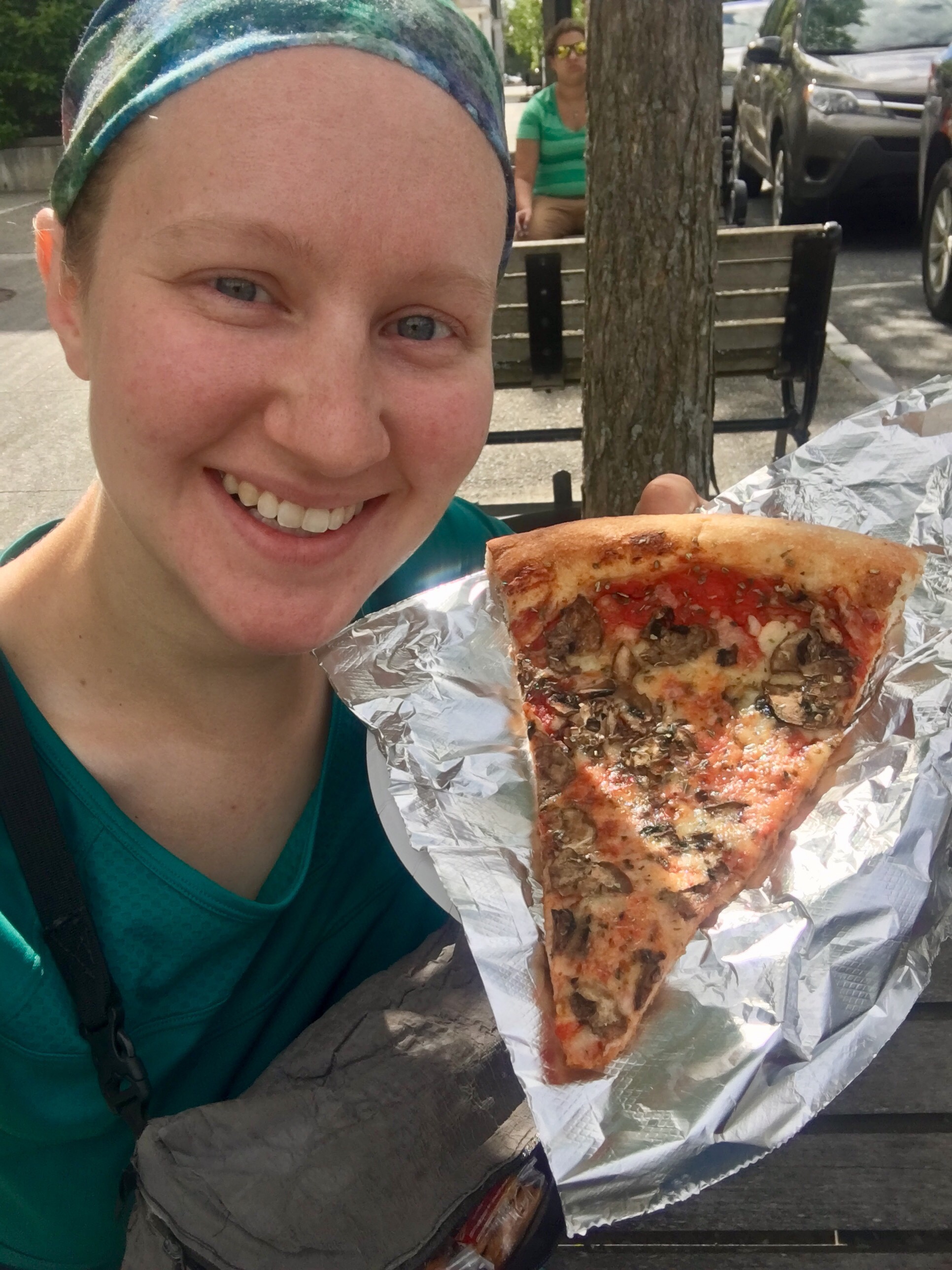 Our trio rejoined, and we headed to the bus route to take the bus to the hotel. Luckily a girl our age told us the bus schedule and helped us navigate which bus to take. I stopped at a Co-op food store to resupply, and Rash and Piñata headed to the hotel. The Co-op was full of organic, healthy food. Not exactly what a hiker needs for resupply. I made do, and headed out to catch the bus. I watched the bus pull away as I walked out of the store. Checking the schedule, I realized I’d have to wait 30 minutes for the next one. When the bus finally arrived, I almost missed my stop around the hotel. I got off at the last second, and walked to the hotel through what I thought was a shortcut. It turned out to have a wall and a swamp in the way, so I made the long trek around, walking on the highway, to get to the hotel. I was stressed, exhausted, and starving. To make matters worse, it started raining during my trek to the hotel. I settled in at the hotel, ate dinner, and almost immediately fell asleep. 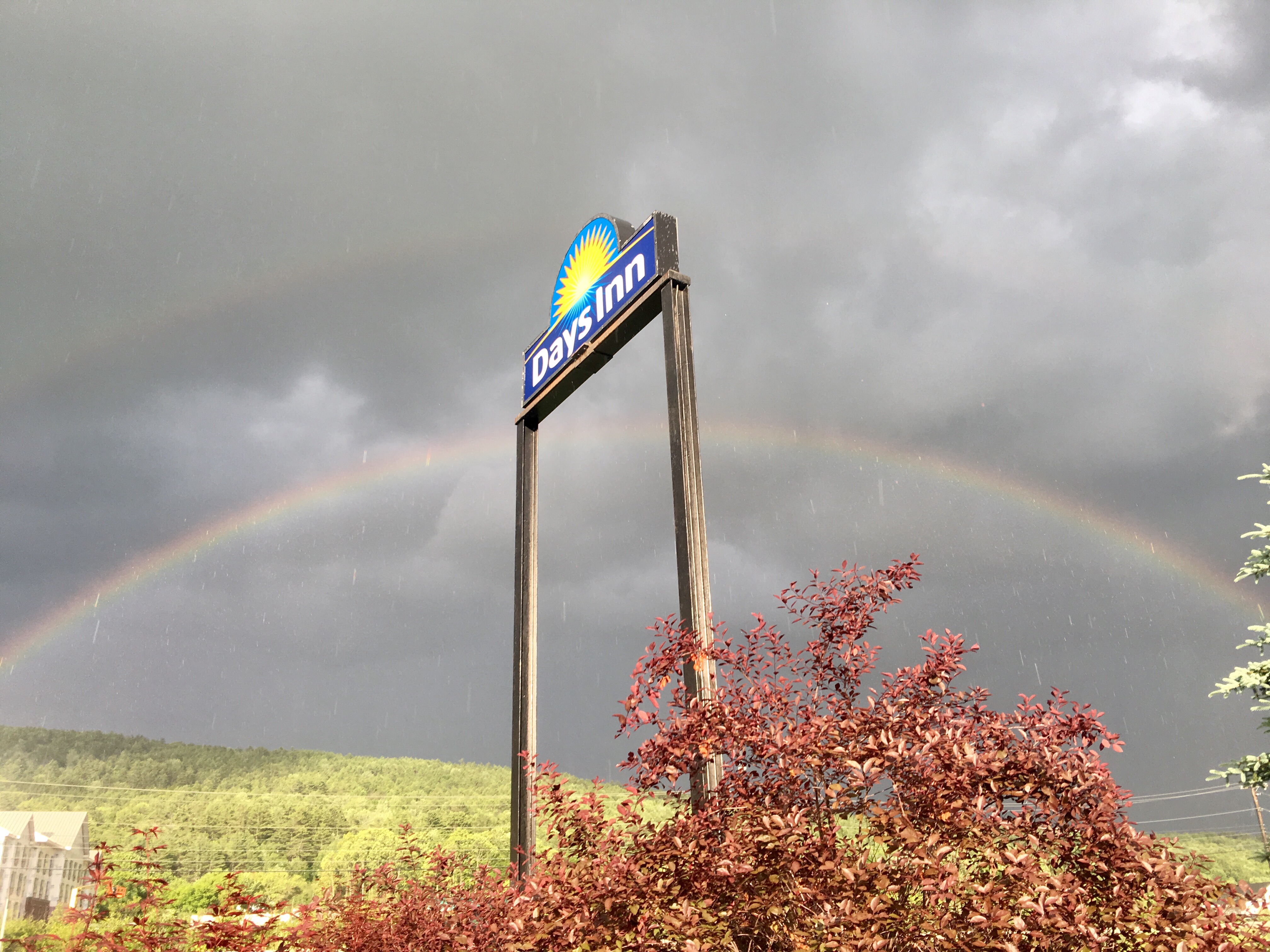 I fell asleep early last night. I don’t remember falling asleep, and woke up sometime in the middle of the night burning up. I shed some layers and switched out my battery packs that were charging. We got up and went to breakfast, where we brainstormed and found an Air B&B to rent for our zeros coming up.

We went back to the room, and per usual didn’t leave until the last minute. We went out to the road to hitch, but decided to walk to the bus stop instead. We missed the bus by 4 minutes, so we had to wait 25 minutes for the next one. We took the bus to the church where we got on yesterday, and hiked the rest of the way through town to the trail.

Since we had such a late start, I was doing the math and realizing I’d probably get to the shelter after 8pm. We had some big climbs to do, and I was dreading having to hurry over them. I took a small break, texted my sister, and ate some snacks. I hiked on, and found Rash and Piñata right up the trail resting at a small stream. We amended our plans to do ~10 miles today instead of the originally planned ~16. That will get us to camp around 6. 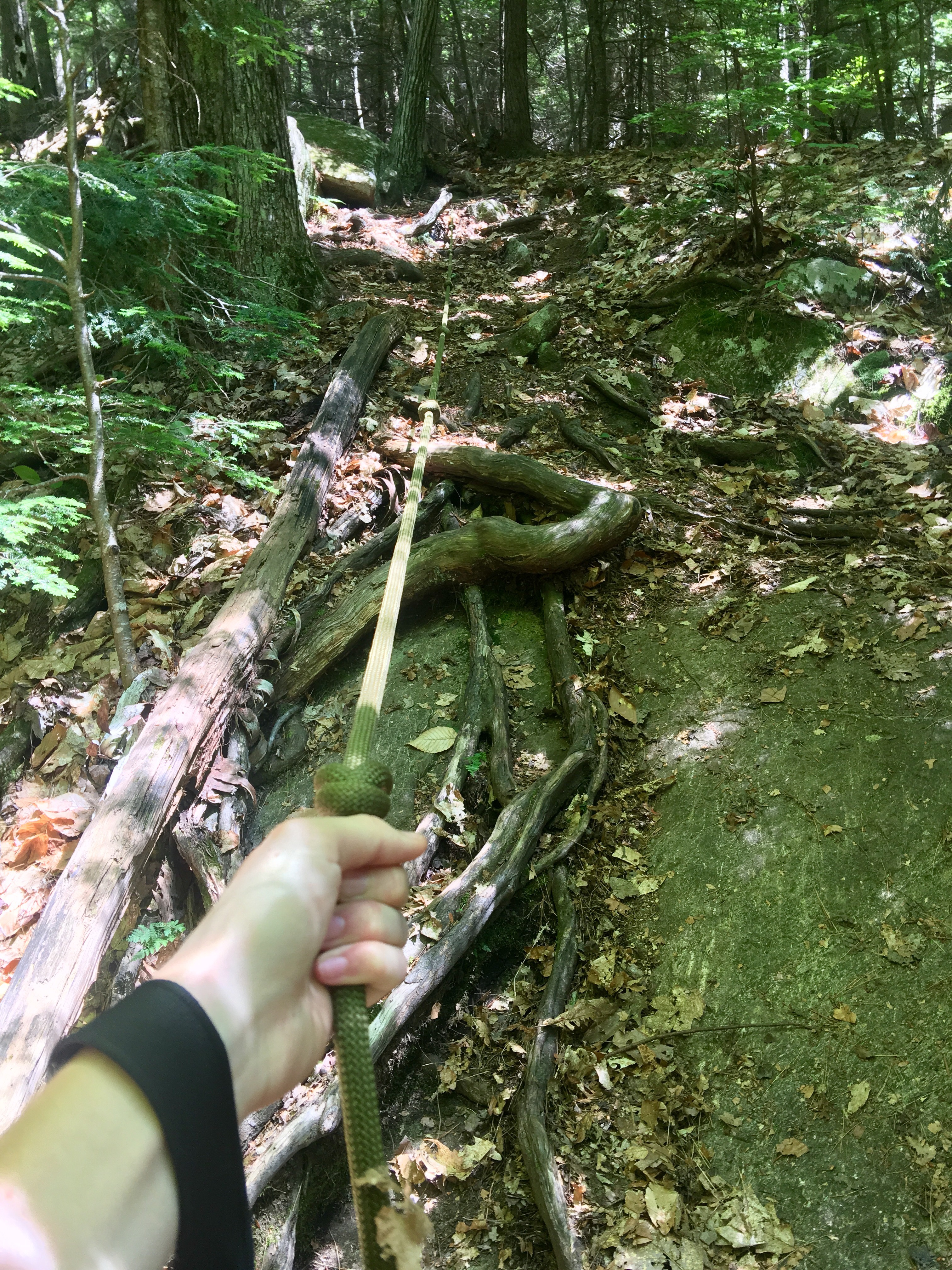 The mountain face was so steep, they installed a rope to help you up 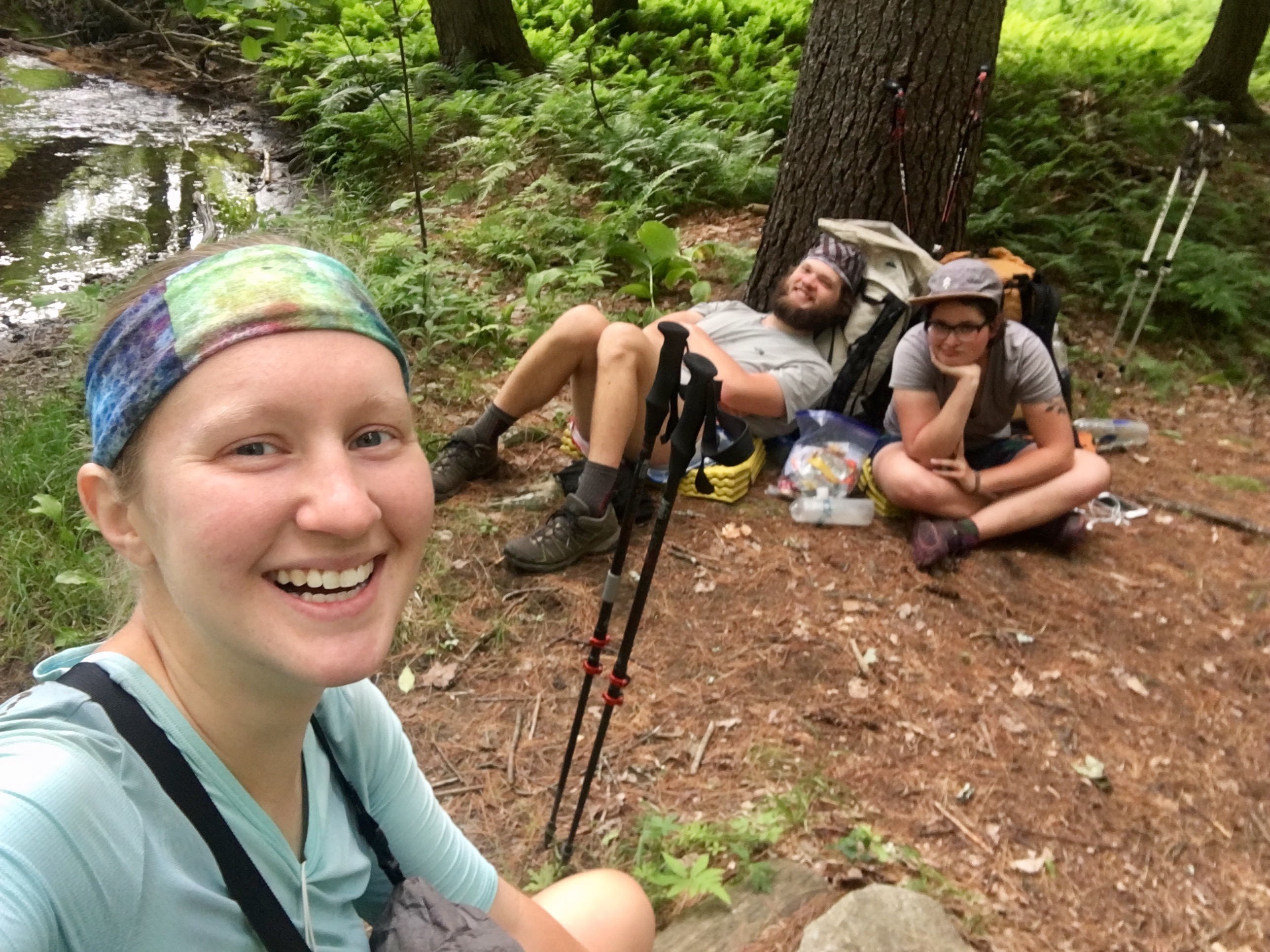 Our break at the stream

With the amended plans, hiking was a lot more enjoyable. I relaxed, and enjoyed my day. Louis FaceTimed me when I was climbing Moose mountain about some things he’s bringing me Friday, so I stopped on a rock and caught my breath. The shelter is on a blue blaze loop, so I passed the first entrance and checked out the water source slightly past the second entrance. It didn’t look too hot, so I decided my water packed out from the bottom of the hill would have to do. 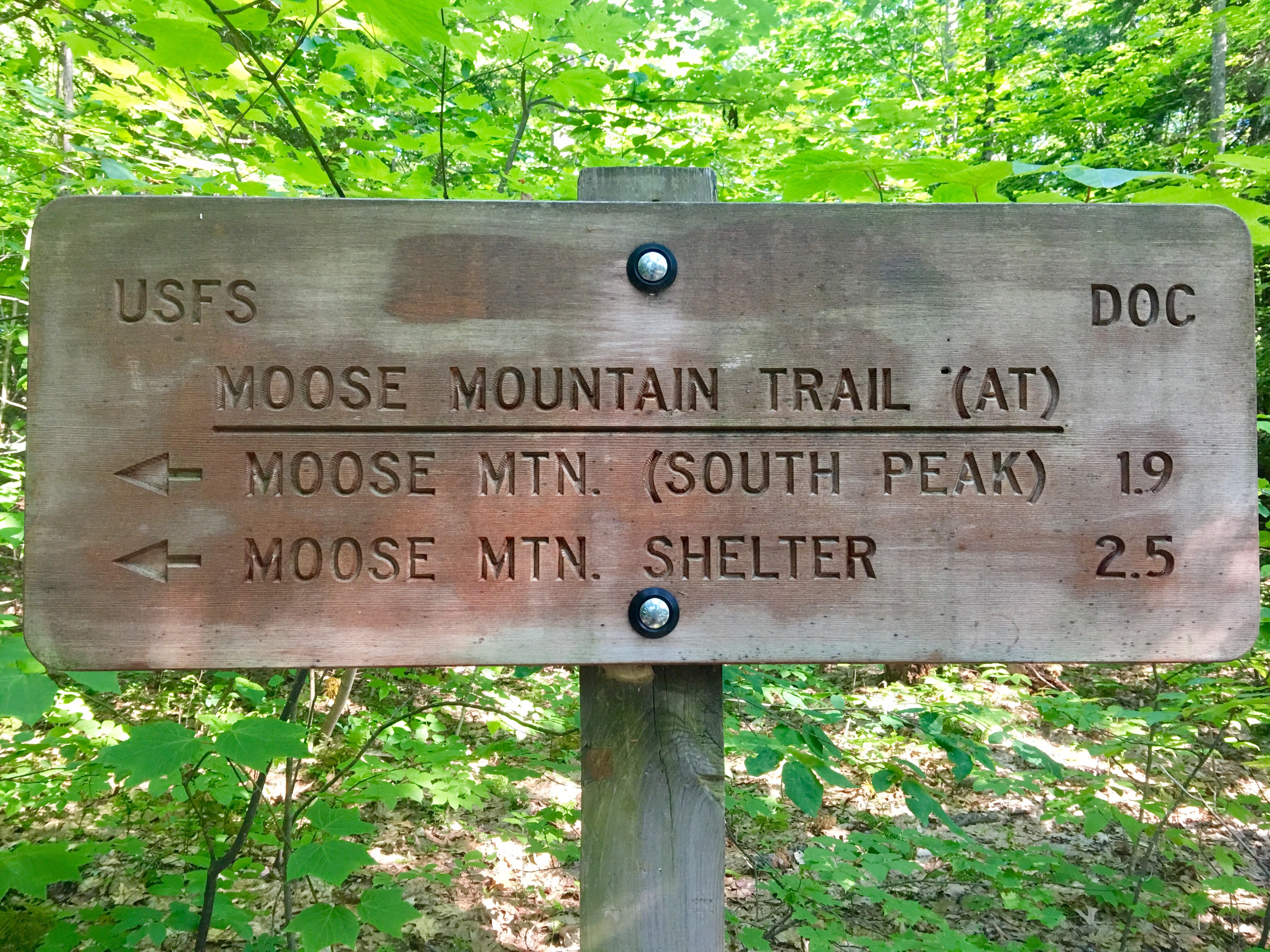 I found Rash, Piñata, and Trinket at the shelter. They all had their hammocks hung, and I hung between 2 close trees in the middle. My tarp ended up sagging in the middle, but I wasn’t about to hang my hammock on the outskirts of camp and listen to noises all night, wondering if it was a bear. I packed out my can of beef and vegetable soup I didn’t eat last night, and had it for dinner. It was delicious and will take my pack weight down by over a pound! We turned in early, while it was still light out. Hopefully we’ll get an early start tomorrow.