Harper’s Ferry-Port Clinton, PA: Lots of bugs. And some thoughts on being a woman out here

This message brought to you from the Port Clinton Hotel, in Port Clinton PA. This lodging has the distinction of being the only place we’ve stayed at that requires a deposit for your towel. I saw the shared bathroom though, and I think I’m going to skip the shower. 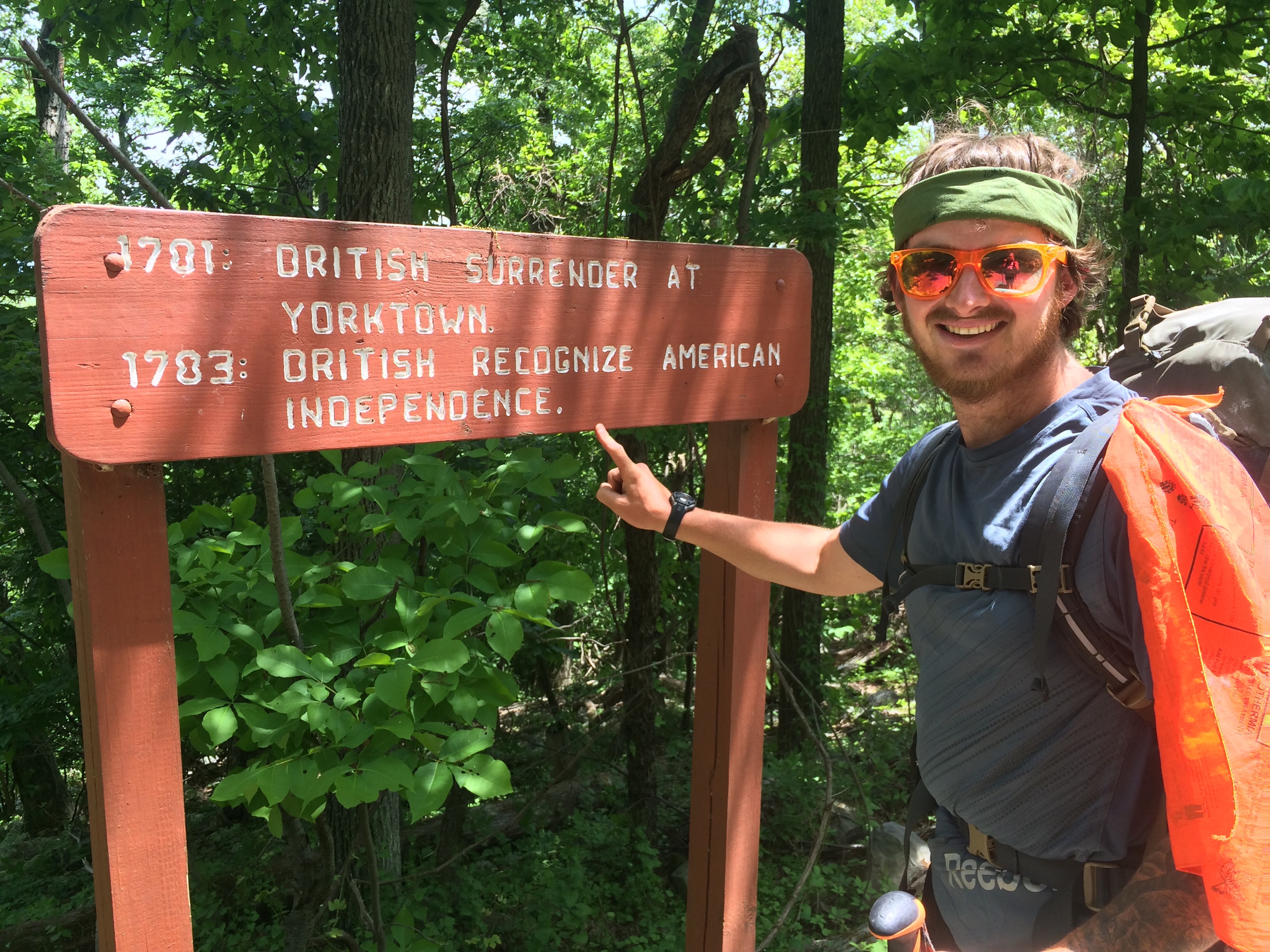 he looked so American I couldn’t resist

Back to the beginning though. After Harper’s Ferry, we encountered the most serene, wide, flat section of trail I’ve encountered since McAfee Knob. Through West Virginia, Maryland, and the first 80 or so miles of Pennsylvania, the trail crossed state parks, tourist attractions, lazy rivers, and other flat things of that nature. It brought to mind more of a lazy afternoon stroll than the haggard trip wire of the Appalachian Trail. There were many times when I looked frantically for a blaze, convinced we had wandered off the AT and were on a bike path for rental cruisers. 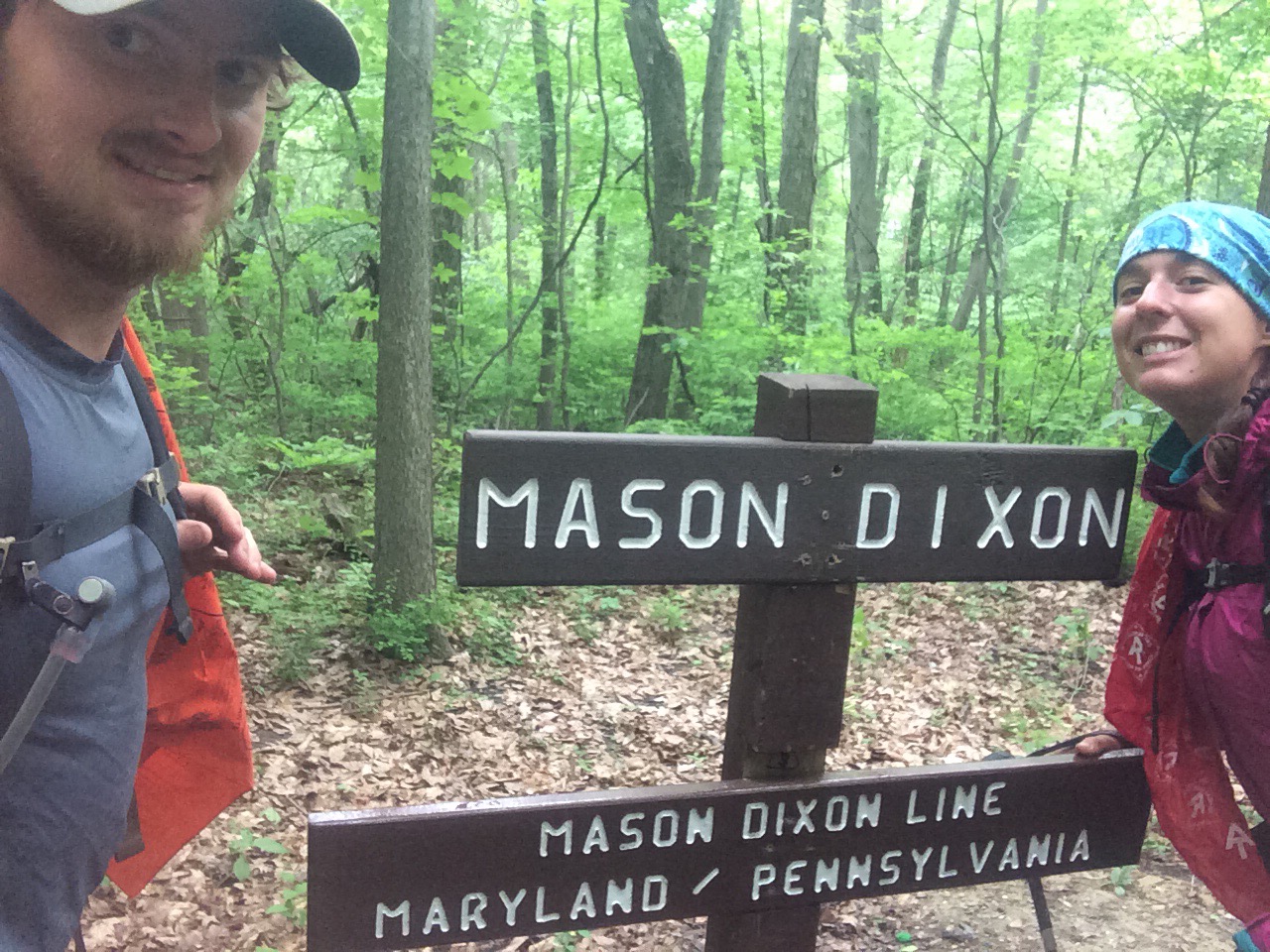 I present another awkward selfie with tortoise and hare

We hit the halfway point and set about attempting the Half-Gallon Challenge. This is a sadistic ritual of the AT, where hikers who have trekked the 1,090 miles attempt to prove their worth not by their hiking prowess, but by how much fatty, sugary dairy products they can consume. I have a bit of a lactose issue, so I didn’t have much hope for success, but Hare sat and doggedly ate the entire 1.5-quart tub of cookie dough ice cream, followed by a pint of raspberry. He finished triumphantly while I was staring dejectedly at a melting mass of mint chocolate chip, feeling the Dairy Devil (<– copyright Kelsey Sather) churning in my stomach. Oh well. If it was a gummy bear eating contest, I would have kicked butt. 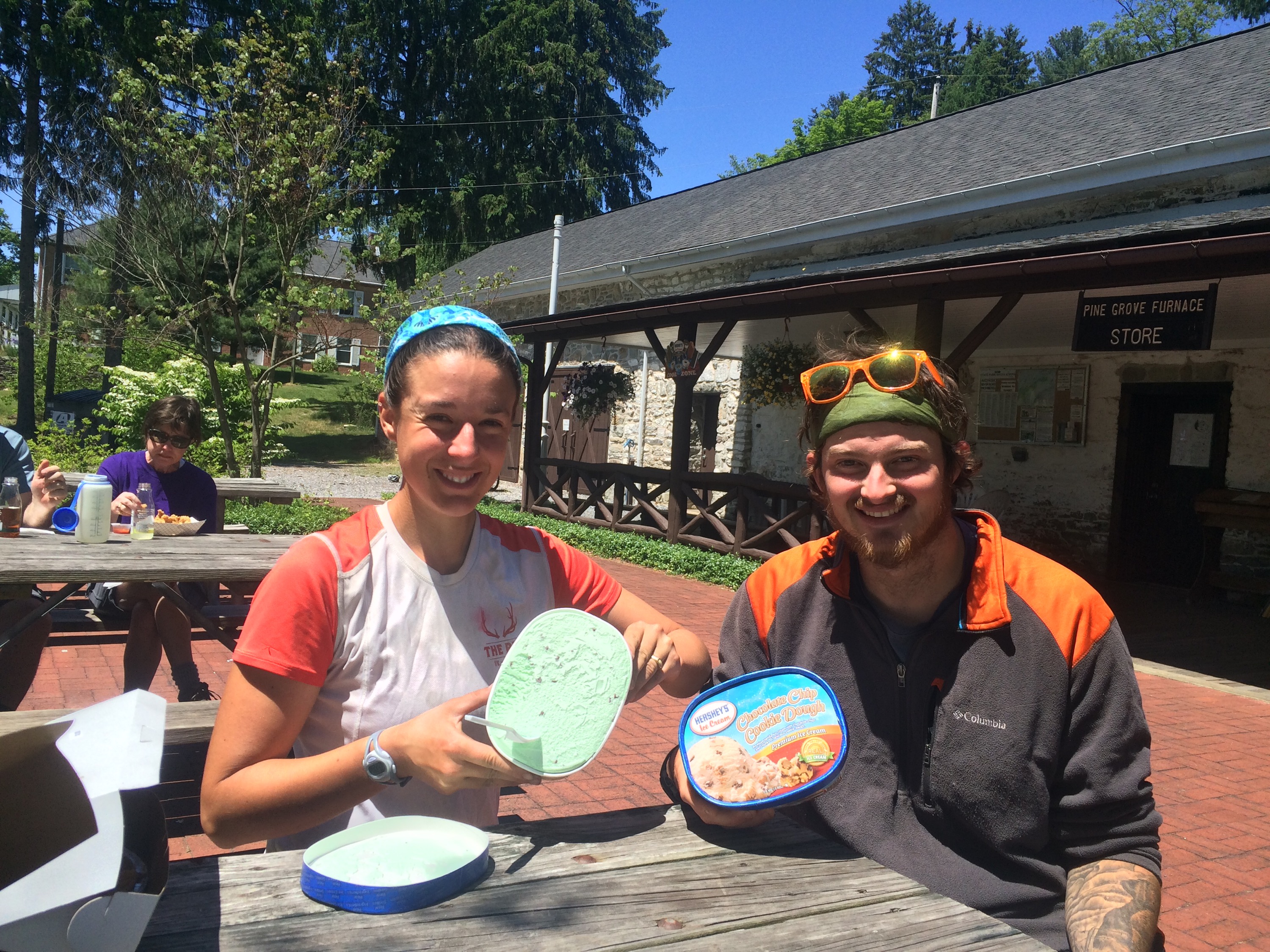 all smiles and full of hope 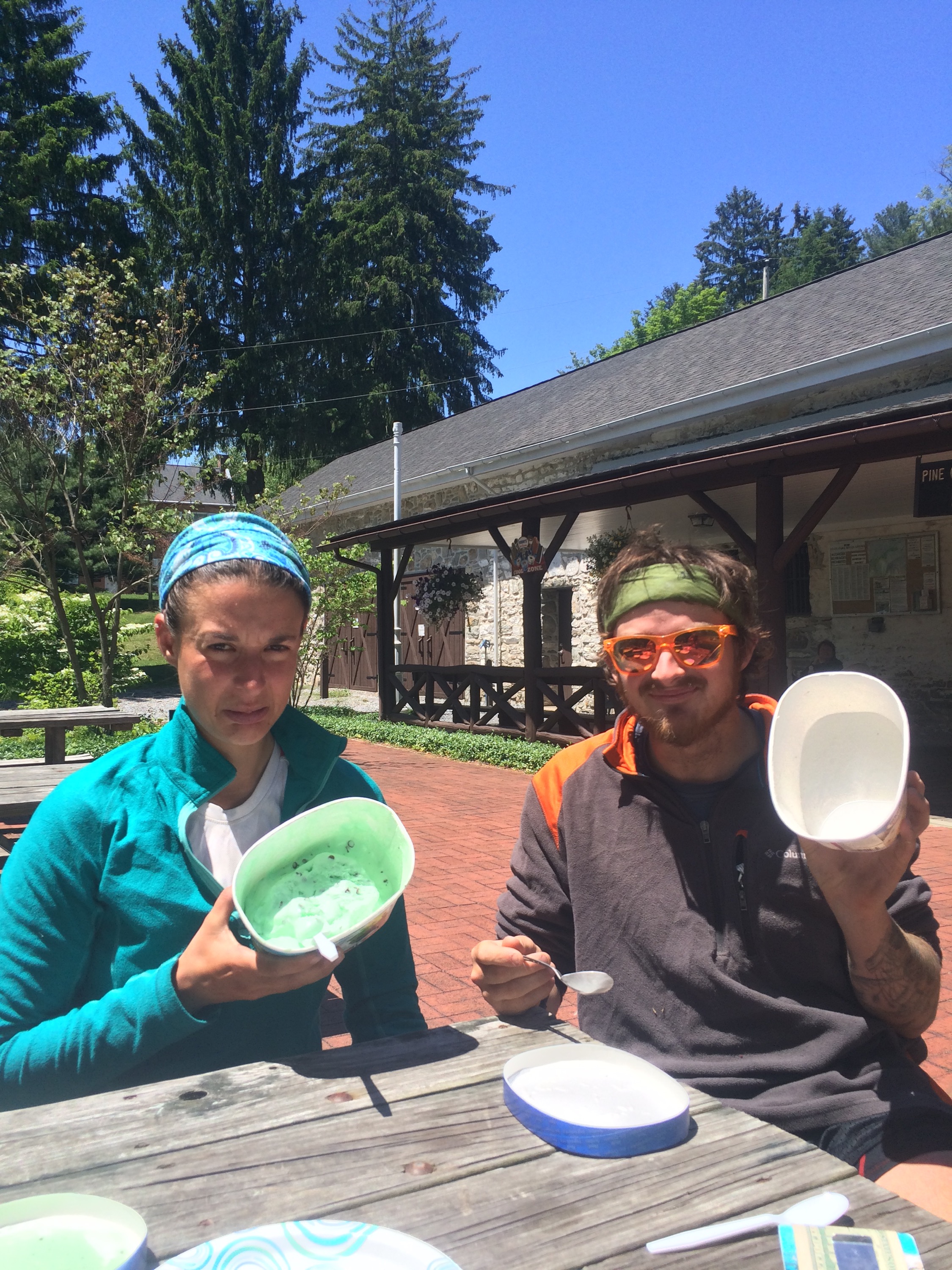 he has an unbelievable capacity for food

The 45-ish miles of Maryland traversed the afore-mentioned state parks and historical sites, then we hit Pennsylvania. Boiling Springs is the most adorable trail town you’ve never heard of, and we walked right into a town-wide Memorial Day BBQ where everyone wanted to feed us and talk to us. The rumors are true: PA has the NICEST people on the whole AT. 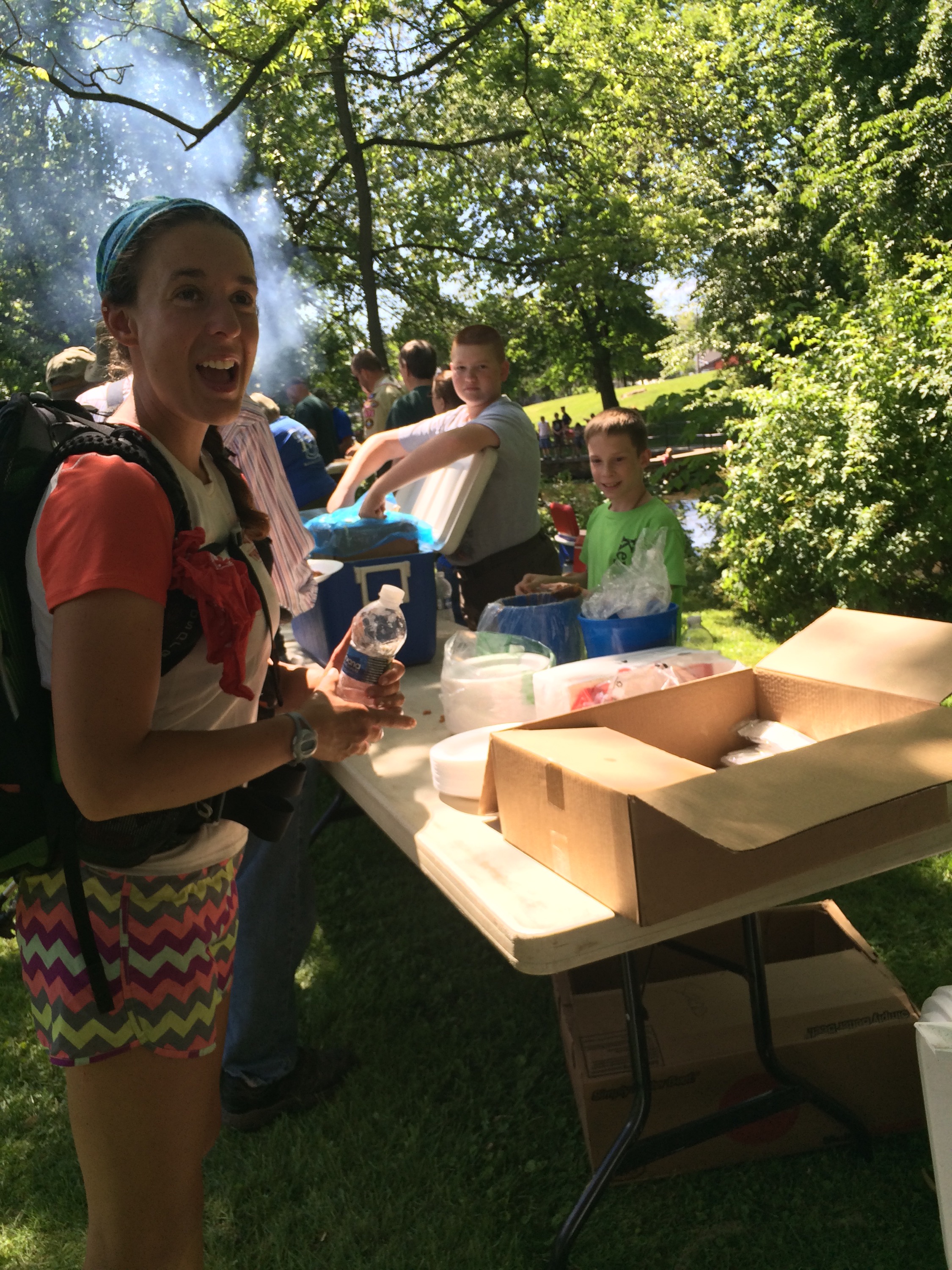 Speaking of Boiling Springs, a word of warning for those staying at the Allenberry: Hare checked his debit card after we left, and they had charged him twice for the $43 room. He called them, and they said they had also forgotten to charge him $4 for the laundry. He was like, “Ok, fine. Charge me $4 more and take off one of the charges… you still charged me twice.” He checked his card again the next day, and not only did they still have the two original charges, they had charged him $4,700. FOUR THOUSAND SEVEN HUNDRED DOLLARS. Someone clearly forgot a very important decimal point. He then did the only appropriate thing, which was call his mom and say “pleeeeease fix this.” At this moment, we’re still waiting for his checking account to not be overdrawn by more than $3,000. Moral of the story: always go back and check your transactions. 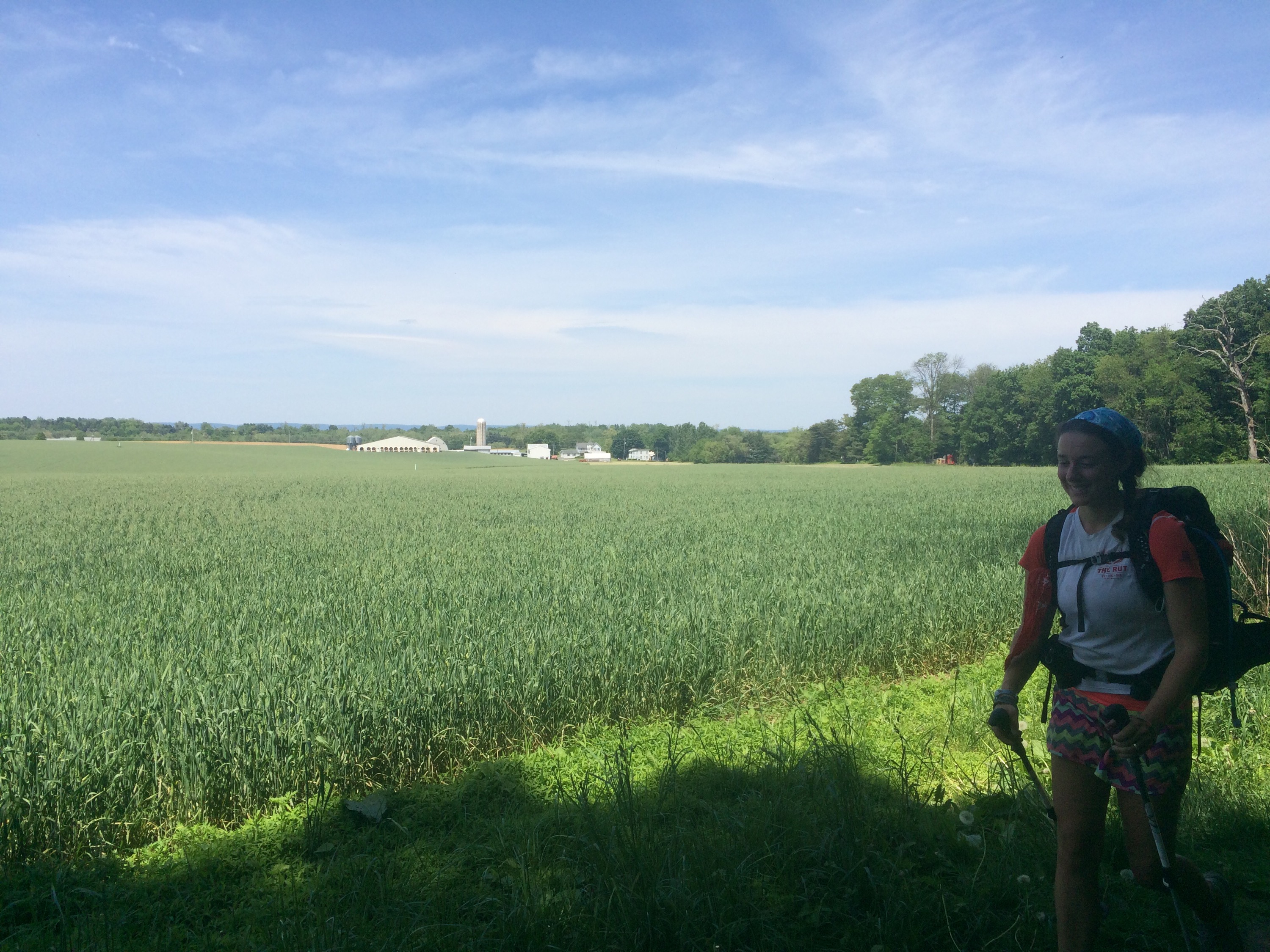 A lot of the trail in southern PA looks like this 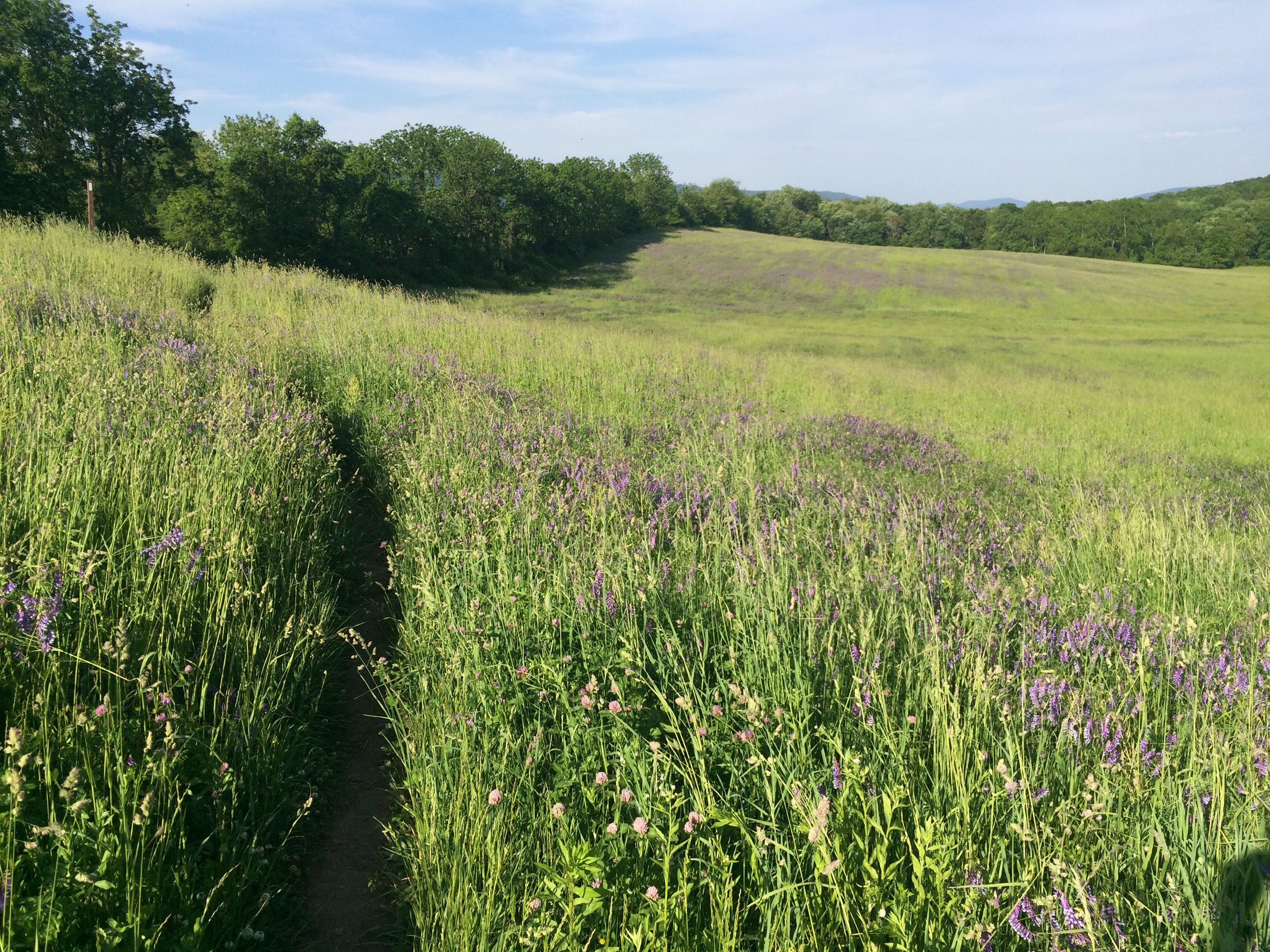 Back to the trail. Despite the warnings of horrible PA terrain, the dreaded rocks don’t get really bad until halfway between Duncannon and Port Clinton, from where they apparently get worse and worse. We’ve definitely hit some boulder fields, but they were spaced miles apart, and the interim was a lovely stroll through farmlands and rolling hills. I’m working on toughening my mental game for the upcoming 100 miles. 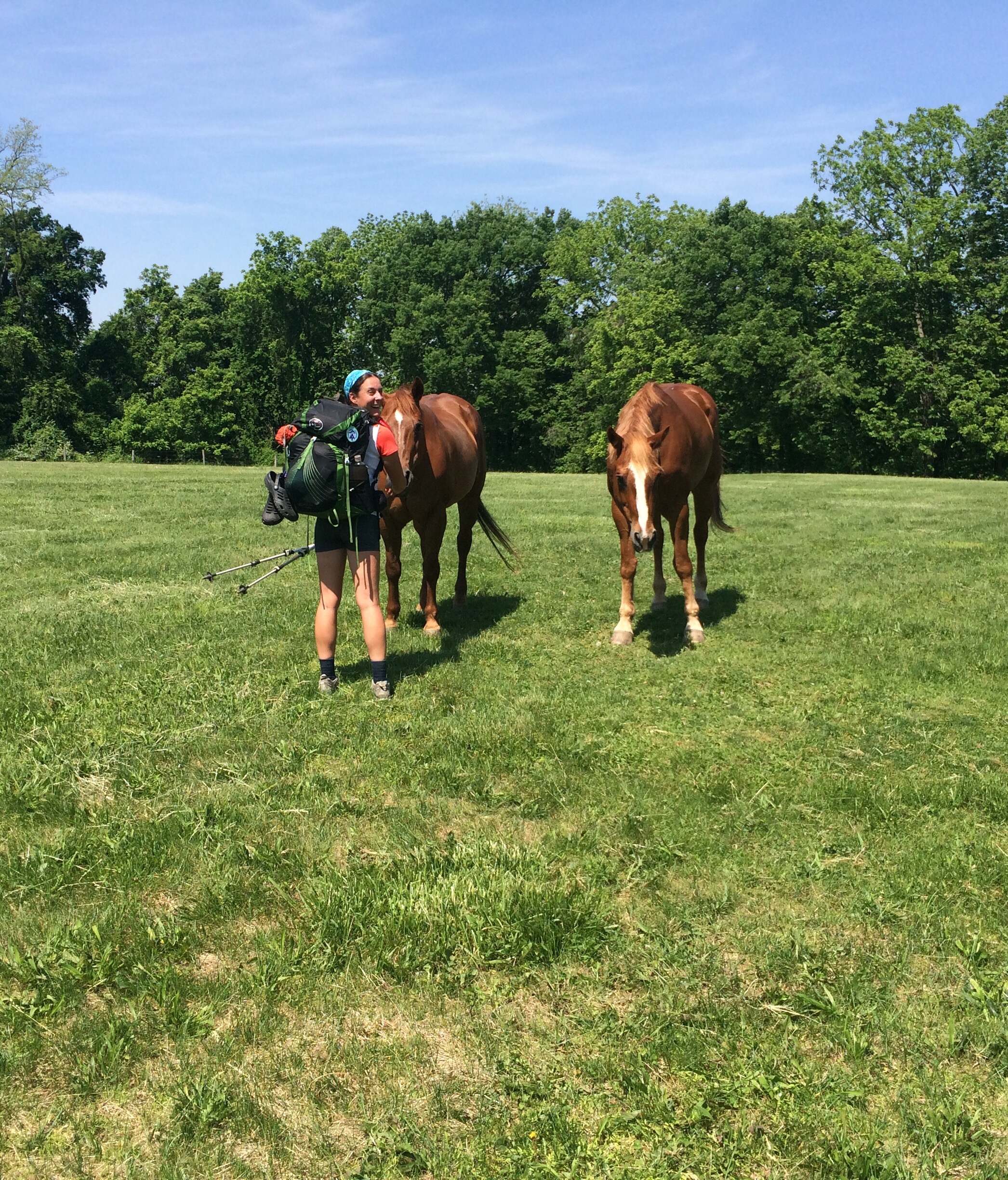 It’s gotten really hot and buggy, and Hare and I were both struggling the past few days. We hadn’t taken a day off in 350 miles, and the patches of boulders were wearing us down. Water has also become more scarce– you don’t hit good sources for 10 miles at a time. The heat makes me feel like I’m always dehydrated, but I can’t carry 6 liters of water with me, too heavy! 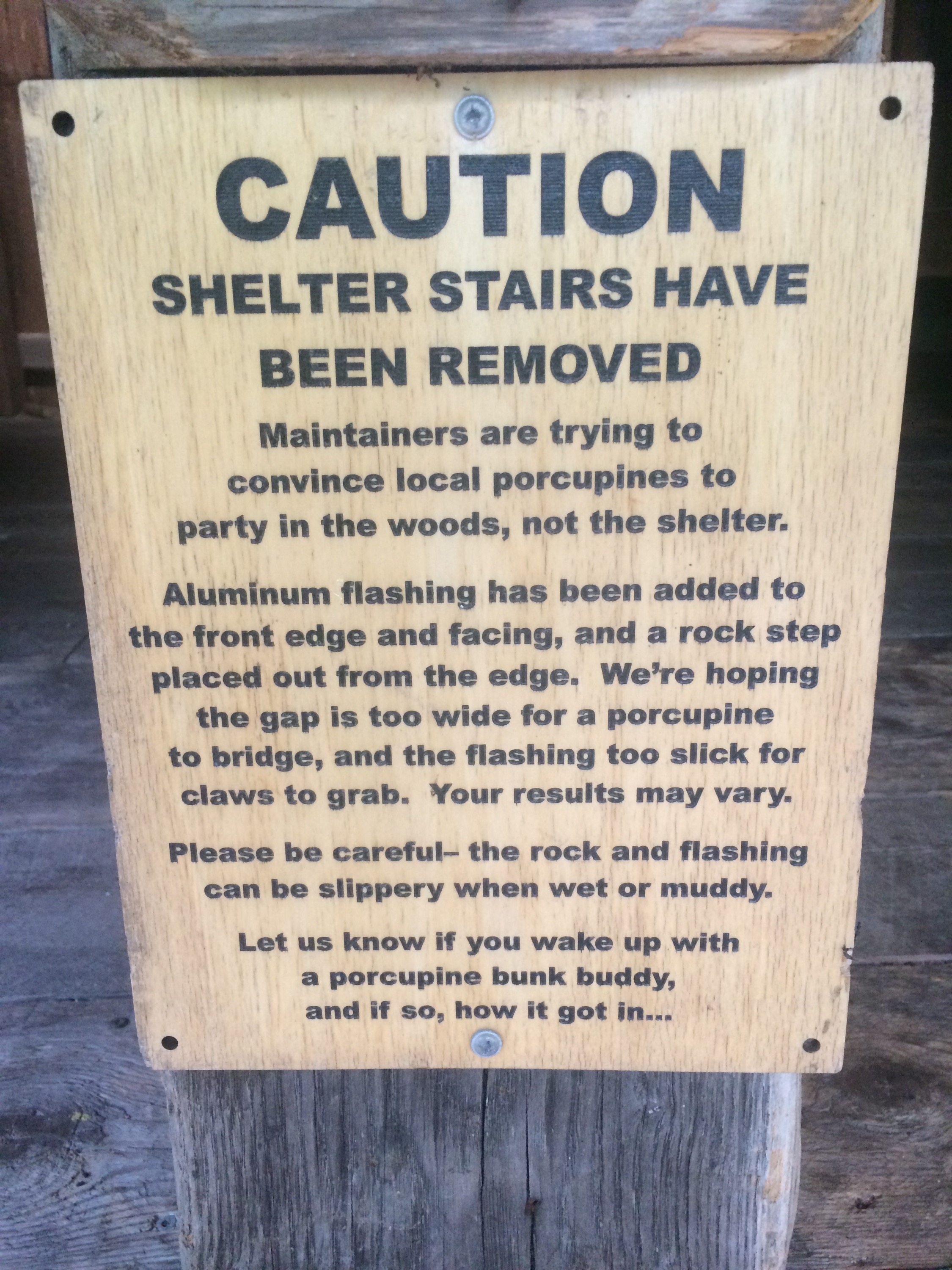 I want to meet whoever wrote the copy for this sign.

For some reason, the bugs are really getting to me, which is not something I anticipated being a real problem. I spent most of the 21 miles yesterday swatting swarming gnats, with sweat and foul, poisonous bug spray dripping in my eyes. I was taking large, uneven steps over jagged rocks on an overgrown section of trail, so it was a choose-you-own-adventure between swatting flies, falling off the rocks into poison ivy, or trying to outrun the bugs. Have you ever tried to outrun something that can fly? It’s dumb. You can’t do it. 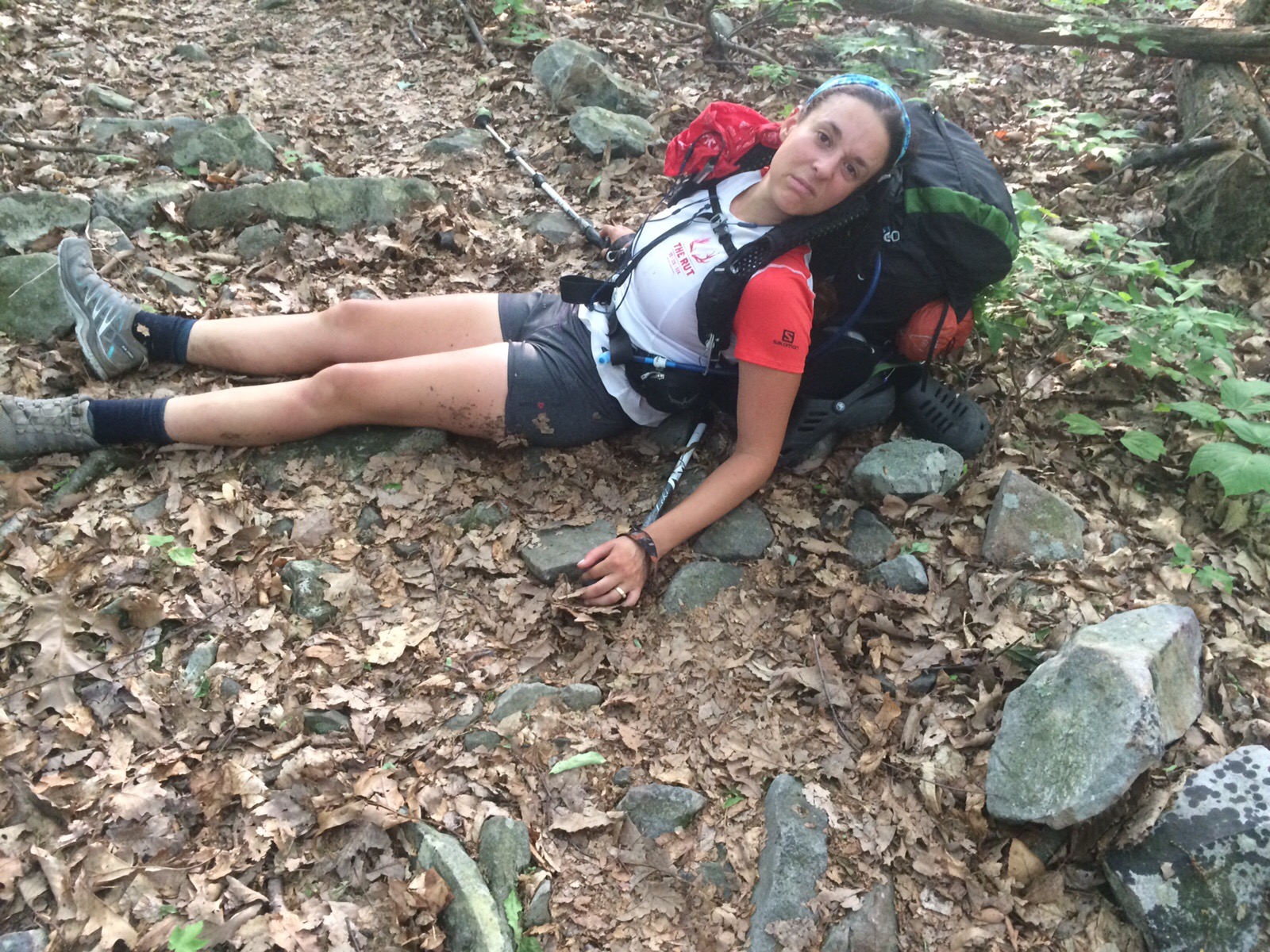 tripped, barrel-rolled over the rocks, and landed leaning up against my pack. falling with style

I ended up hauling a$$ for the last five miles of the day, trying to escape the bugs. I tore away from Hare, who was limping along on really bad feet and tried not to lose my mind as I was being dive-bombed by the worst part of the food chain. All of the sudden, I came to a dirt road that wasn’t supposed to be before the shelter, which meant to me that I’d overshot the trail to the campsite, and I would have to backtrack. I crumpled to the ground and started SOBBING. I’ve definitely cried on the trail before, but it’s been mostly sniffles and a few self-pity tears. This was full-out hysterical bawling, and I was trying to summon the gumption to turn around and head back up the trail when Hare popped out of the woods, awkwardly stood there while I blubbered on the ground, then informed me I had misread the guidebook and the shelter was a half mile further. Crisis averted, mostly. 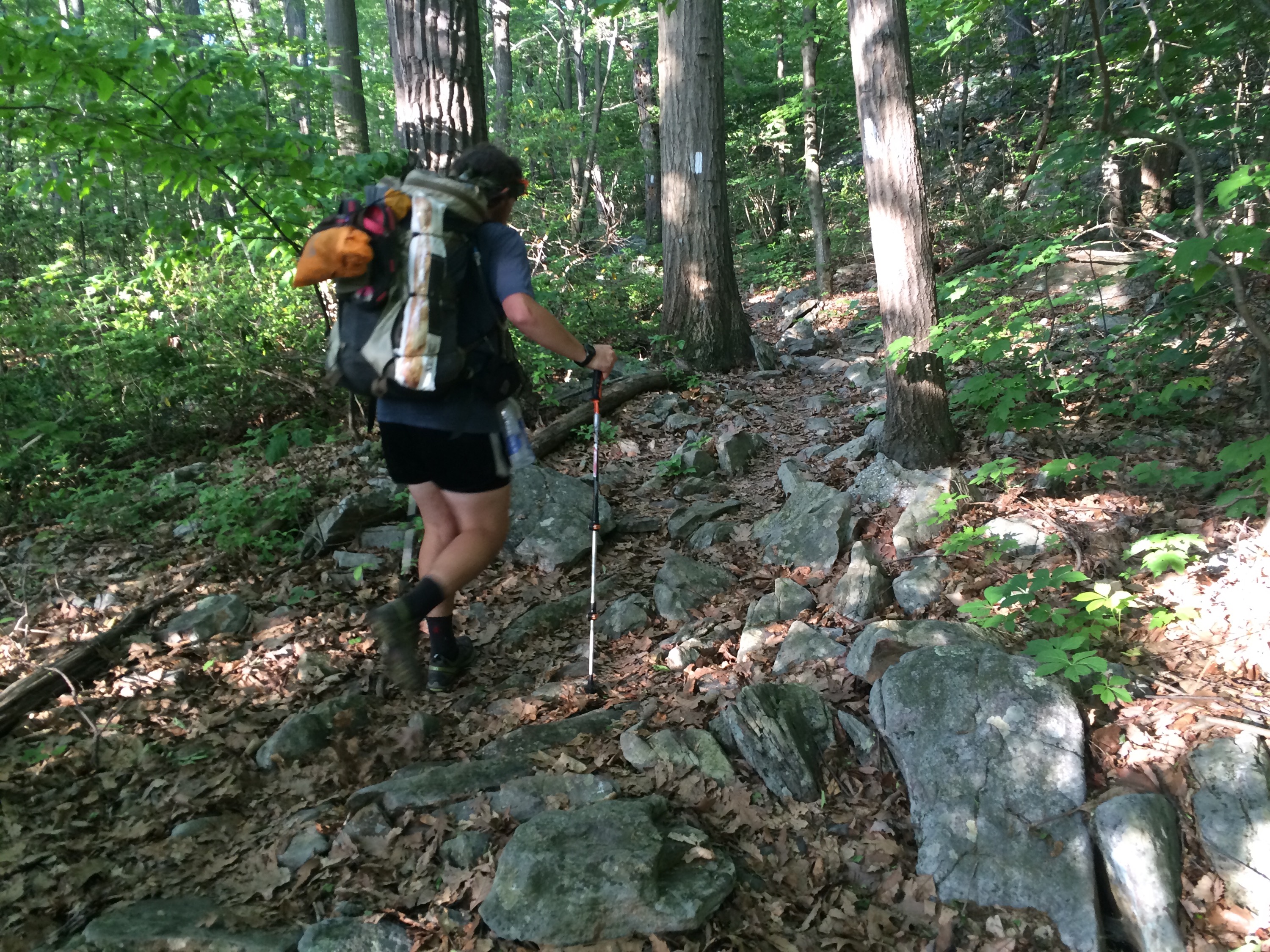 at first you carry too much stuff, then you get rid of everything, finally you stop caring and start carrying things like baguettes into the woods

Hare’s feet are a major mess again. I feel terrible he’s had to deal with so much foot pain. It poured rain a few days ago, and we walked with soggy feet for two days, which definitely felt crappy for me too, like the bottoms of my feet were raw and burning. This is weird, since it basically rained for the first 400 miles of our hike, and we never experienced related foot issues. My feet felt better yesterday and today, but his foot pain got worse and worse until it feels like he’s walking on hot needles. Hoping that a day off will magically cure whatever it is. He did assure me that if his feet rot and fall off, he’ll drag himself to Katahdin. If you knew him, you’d know that this is a realistic promise. 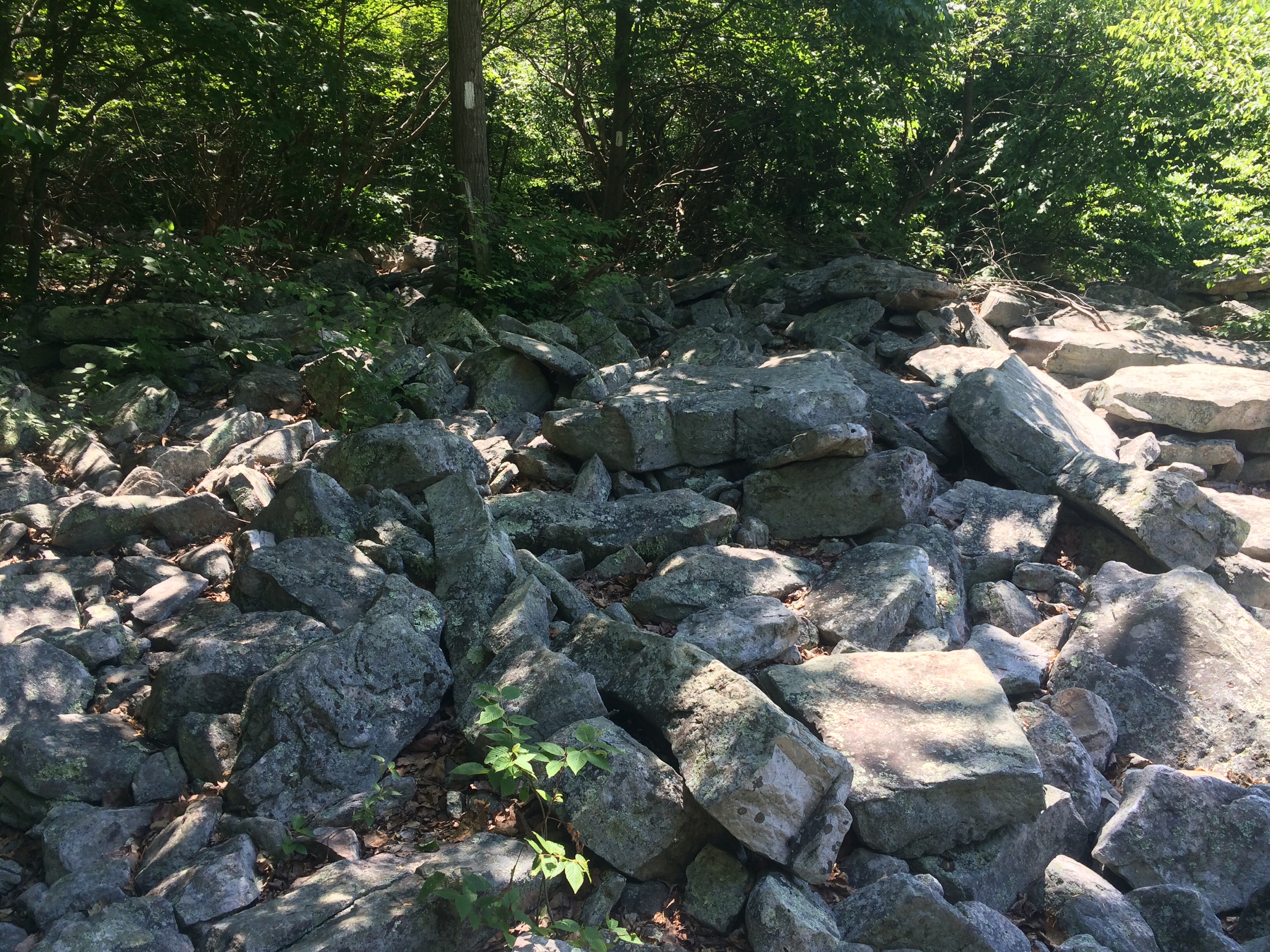 We’re also both getting gnarly chafing from our sweaty shorts rubbing on our legs, so we’ve been dumping Anti Monkey-Butt powder on them. It’s a great look. I’m pretty sure my bosses read this, so we’re not going to elaborate on the other places we’re getting bad chafing. 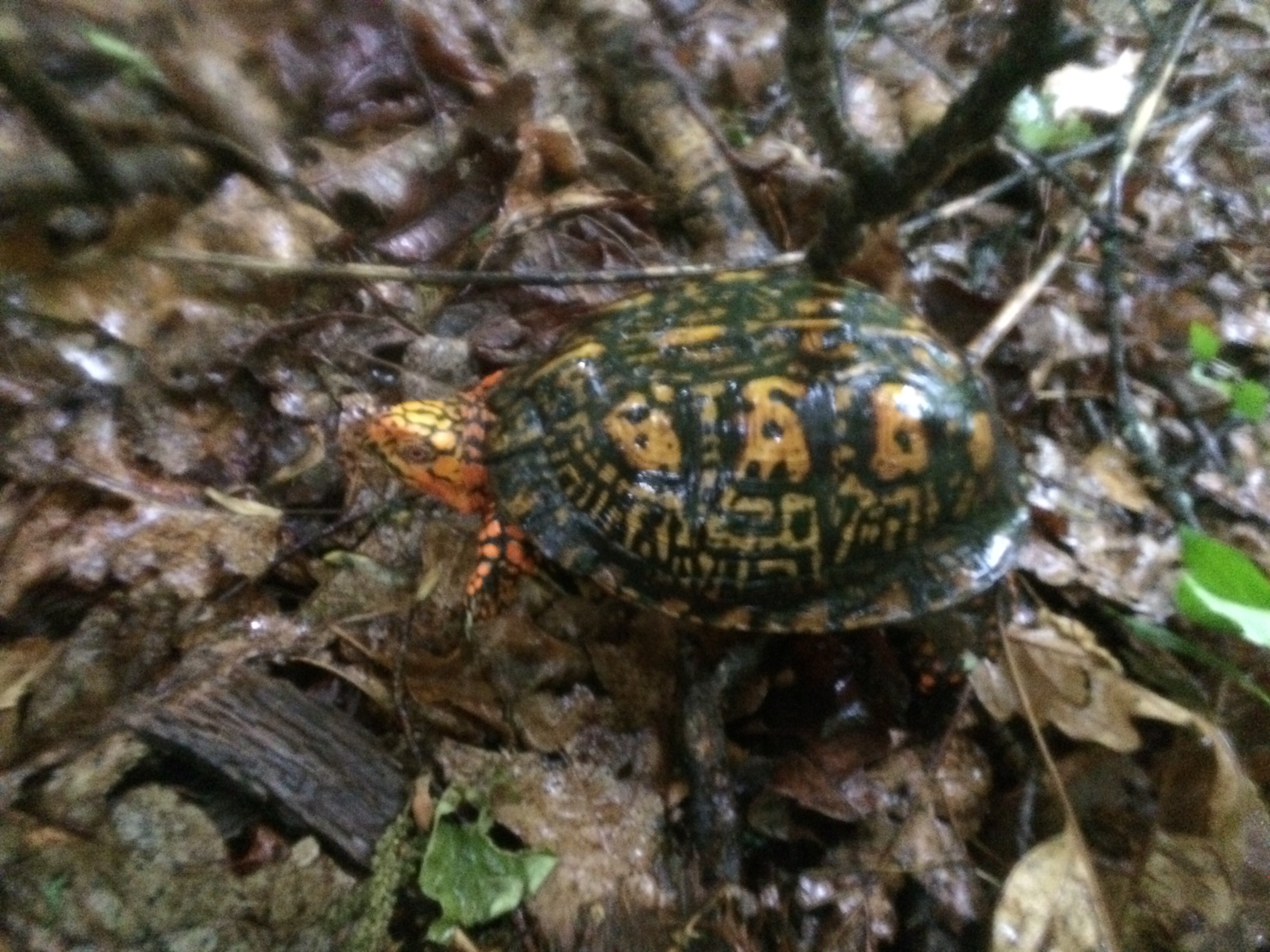 one day we saw a tortoise (fine, a turtle) 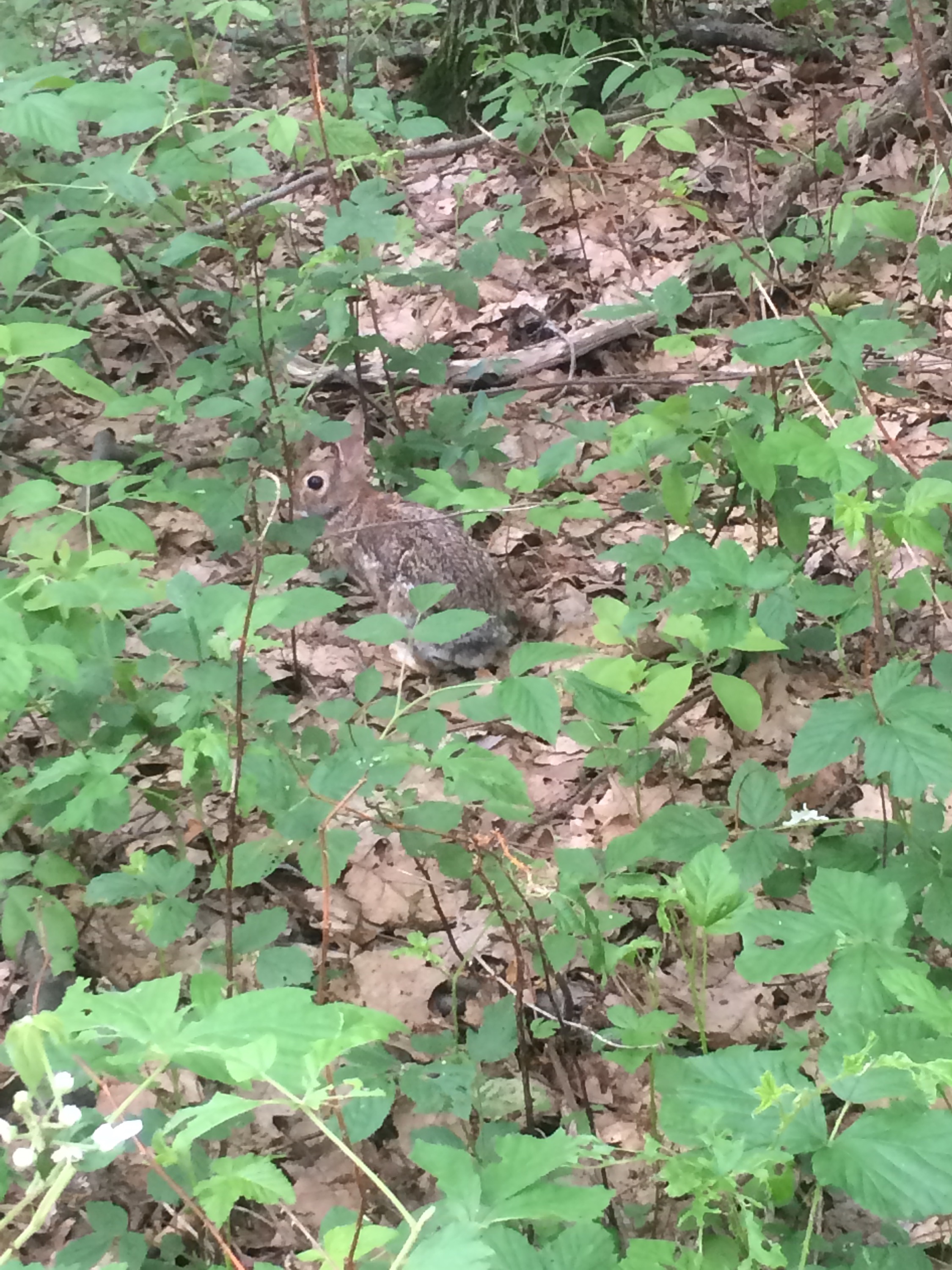 So that’s it for trail news, but I’ve been preoccupied recently with my experience of being an “attached” female on the AT. I couldn’t figure out why I’ve been feeling oddly sidelined for a lot of the trip, until I was reading in the tent the other night and I heard Hare having a conversation with a few guys around the campfire. One of them asked (yet again) what it’s like having a girl come along with him. Hare corrected the guy (yet again) that the AT has long been a goal of mine, and he only recently jumped on board.

The broad-based assumption is that I am tagging along with Hare, and it’s been the assumption since the beginning. 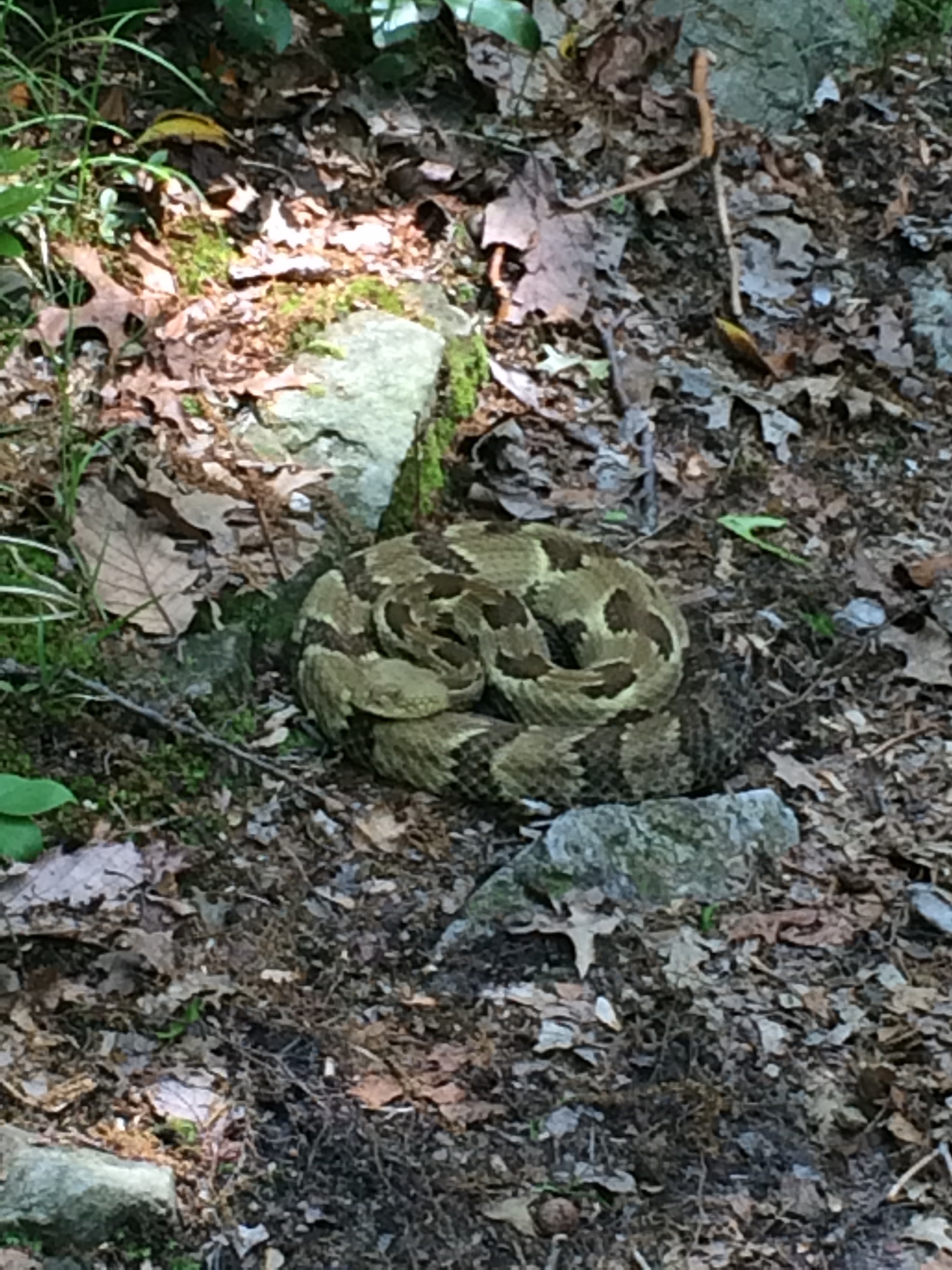 then I almost stepped on this fellow

I spend a half-hour or so reading in the tent every night, but I think I’m very outgoing otherwise. It took me a while (like 1,000 miles) to realize that it’s a rare occasion that I am addressed solely on my own. I’ve been feeling like I haven’t connected with anyone out here, and I think it’s because I am still, 95% of the time, the only female around, and the guys seem averse to sitting down and having a direct conversation with me. It’s always through Hare. This is at once interesting and depressing, as I would consider myself the more outspoken of the two of us. 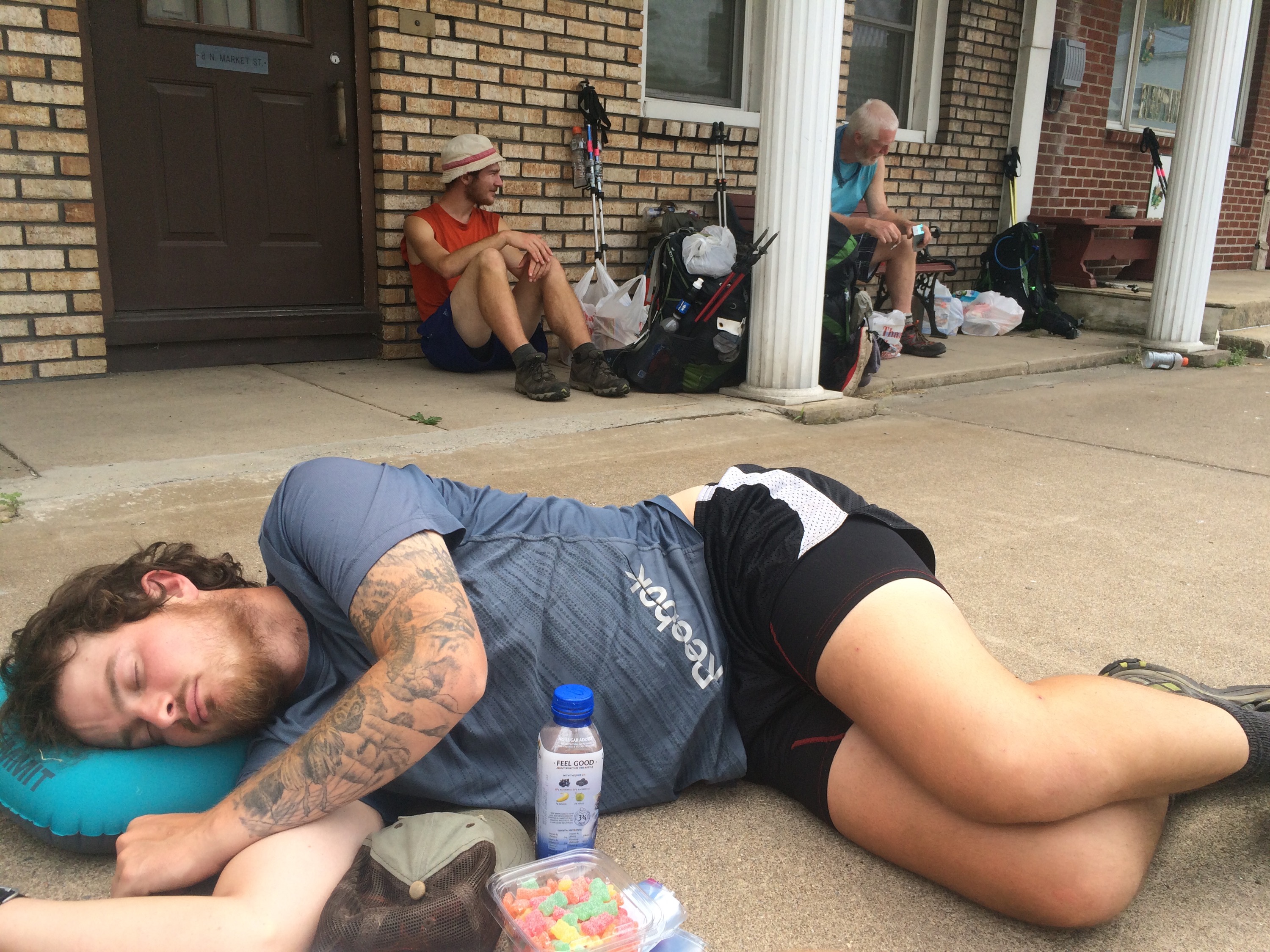 he likes to sleep too!

For instance, Hare borrowed a pedal bike and went for a 10-mile resupply adventure in Boiling Springs, and I was sitting by myself outside the regional AT office keeping an eye on our packs. A few thru-hikers who I’d never met (all young dudes) showed up, and I couldn’t figure out what was different, until I realized they were all addressing me directly, and I was an equal part of the conversation. Hare came back, and it stopped.

I’m not blaming Hare, or the other guys, or anyone, and even though Hare doesn’t believe me, I don’t think I’m imagining it. The trail can be lonely and isolating for me at times, and while Hare has bro time and bro jokes, I feel like I’m on the outskirts. I wonder if other women hiking with a significant other feel like this? I would love to ask them, but as we’ve established, I don’t know any!! 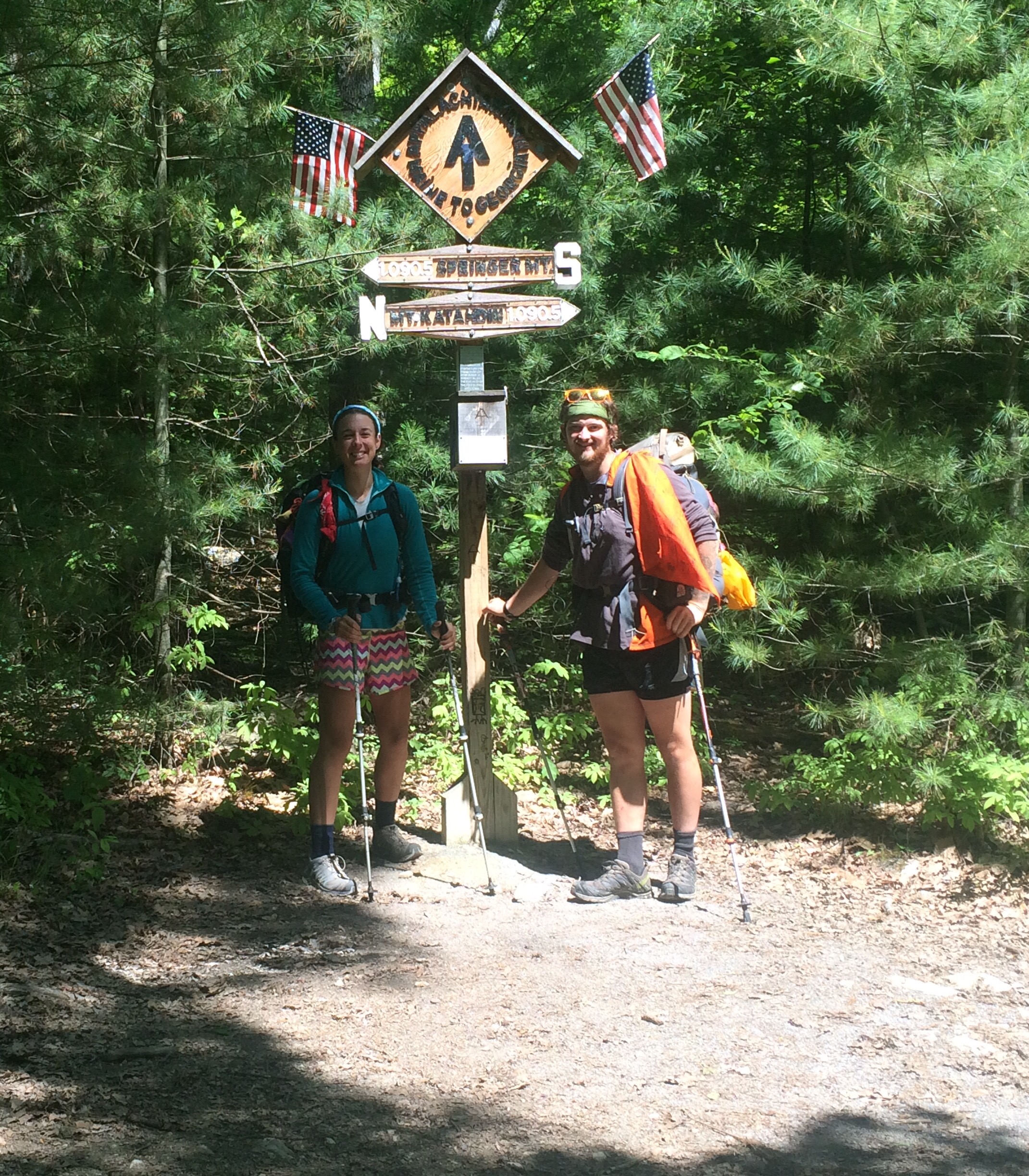 Well that’s about it. We’re going to the giant Cabela’s tomorrow and I’m really excited. Hare’s parents are visiting us in two weeks, then we will see my family a few weeks after that. I can’t believe how fast this is going by, less than 1000 miles to go!